It seems to be a trial and error thing as I have been able to remove,or greatly reduce, the rectangular artifact with the G8 from some Sharp diodes. It certainly isn't the best lens for that though.

@paul1598419 @steve001 I am using my Samsung Galaxy s9 and I haven't tried imgur yet I'll see what I can do. In the meantime, does anyone have pictures of the raw output of the 488 sharp diodes? I have seen some weird line of light on every diode I've tested for this wavelength. I'm confident that the weird output of the diode is the cause of the box artifact once collimating is done

The g8 is still a really good lense. It works fantastic for this diode even if the box is still present just look at that beam

Hi, I dont care to much about the reflection , I just enjoy the awesome color of the WL beam. regardless this is one great diode in my opinion.
Others have an different outlook about this box , but me I'm happy with the WL in any host .

@Lifetime17 you're absolutely right about the wavelength, this is my favorite out of 10 diodes I purchased. In my eyes there's a few that show significant difference ranging from turquoise to aquamarine in color. That difference quickly fades away when trying to get a picture :/ and other people seem to pick up a different color from what I see but it's beautiful nonetheless

My camera makes it look blue but my eye sees the green in it too, it is an awesome blue/green and the background around it makes our brain perceive it as more blue or green depending on it's surroundings which is very cool and the divergence is very good, I don't care about that artifact seen close up as it's so much more fun to let it stretch it's legs.

I like to call it my hand held argon imitator.

Well...ONE thing we can all agree on....the Aquamarine / Cyan colour is....for whatever reason....an extremely aesthetic / pleasing colour to behold.
I have NO idea why this is.....perhaps because we associate the colour with beautiful tropical beach scene's...dunno ???? CDBEAM
S

CDBEAM777 said:
Well...ONE thing we can all agree on....the Aquamarine / Cyan colour is....for whatever reason....an extremely aesthetic / pleasing colour to behold.
I have NO idea why this is.....perhaps because we associate the colour with beautiful tropical beach scene's...dunno ???? CDBEAM
Click to expand...

Your question of why blue prompted me to find out.

Why most people’s favorite color is blue

Think about your favorite color and try to explain the reasons behind having chosen it. Depending on who you are, you might say that your…

LaserRanger said:
Sorry for the double Post but I finally figured out I can upload them if I crop them out of a bigger picture

The g8 is still a really good lense. It works fantastic for this diode even if the box is still present just look at that beam
Click to expand...

Here yo go. Also resized for a little easier viewing.

I will reply here as this is something I have strong opinions on. Your observation was 100% as on topic. I embrace it as it added valuable insight for this lens giving people the actual info to know what to expect which they get very little of out there. This it not a sales thread, not even a thread of mine although I would have started one myself if Red had not already put it up. No need to be redundant just to have the OP. I don't really do sales threads as they get off purpose and don't have the same feel that encourages great collaborative efforts to generating the best information that can be had due to the way this industry is structured. Also now get to explore a new quandary on why it cleans up others but not the 488. Anyway nice spot. 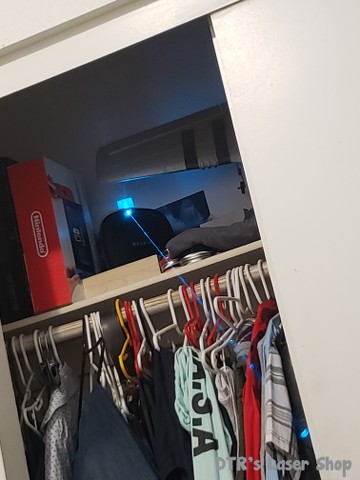 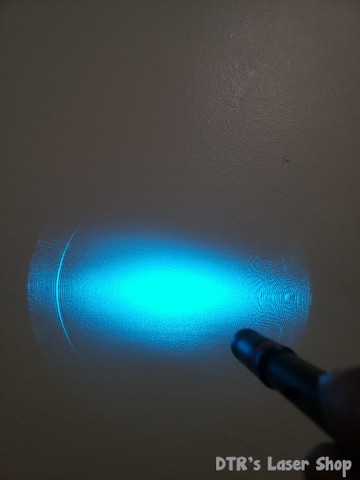 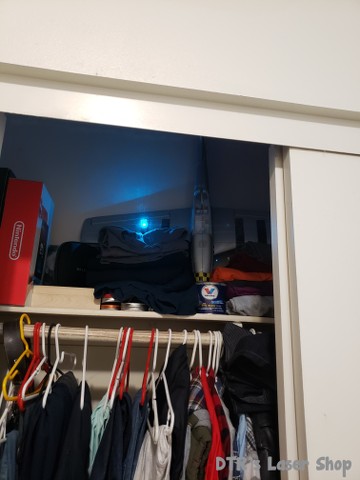 I don't know if you guys need this info, but the G8 does not remove box / ghost artifact from NUGM03 either. I can edit in some photos here if you guys want to

Hi, I have ordered some G8 lens just waiting to get them . I will test them on the NUBM03/525nmdiode, With the g ball and one without

HMMmmmmmm ???? Not to throw this topic into yet further confusion ( But...hahaha...I will anyway ) What if...just what if.....there are some batches of diodes....from the same manufacture....produced roughly at the same time....that have very small variations in the die construction.....and this then means....that the SAME model # LD....could or could NOT have the " Ghost Box " effect when coupled with the G8 Colli .....Great !!!.....SO...I suppose the Take-Away here is...….

Me too bought 5 of these new DTR G-8 collimators to test.

Strange that everyone in this thread has only written about advantages and almost no one reported drawbacks.

Drawabacks:
- Low divergence is not for free - the close range beam width (at collimator issue) is higher - 1+mm compared to 0.6mm after G-2. This is not important for single beam builds but has to be considered at KE or multiple beam designs.
- Shallow thread depth in 12mm Cu modules because of high focal lengh. This was briefly mentioned by RA and Red in posts 75&76 but without pictures it was not clear how bad it can be for threads in soft metal like Cu.

Here you could see that for infinty focus the colli is only 1-2 turns inside the module what is not good from my engineering point of view...

It enters better (half deep) into LSP holders where I have Ushio red diodes inside. But this trial was useless - the red lasers combined output fell exactly the same 50% as divergence did!

For use in a projector you could use a length of threaded tube or a M9x0.5 nut to lock down your focus and hold your lens firmly centered, I sometimes use a M9x0.5 threaded connector to lock down my infinity focus and I can also add an emptied out lens barrel after the lens to police up some wide angle overspray when using other lenses as well.

Funny that you mentioned this now as I was trying a G8 out with my NDB7675 build yesterday, which has a copper module in it. It takes very few turns to get to focus with most of the lens housing well outside the module. The power was decreased by much less than the 2 element lens, but the rectangular artifact very present with the G2 was gone with the G8. Unfortunately, the amount of lens housing still outside of the copper module makes this lens less of an option for this build.
You must log in or register to reply here.
Share:
Facebook Twitter Reddit Pinterest Tumblr WhatsApp Email Share Link