The spot/bar size at 15 feet is comparable to the 3 element and the power test is with a nice strong NDB7875 running at 2.4a

YEP...DING DING DING, we have a Winner.
Testing at 15 feet in my cinder block encased marshmallow toasting pit the nubm44 with G8 and 3X beam expander is a winner, my cardboard TP roll is alit directly, faster than with a 3 element as the primary and the G7 only catches a single turn of threads and has no retainer so you cant take it apart, but the G8 catches several threads, this is an improvement, I only ordered 5 more so others can get some......but I expect this will replace all my 3 elements.

Awesome. They looked pretty nice when they just landed but I was running out the door to get out of town and did not have time to do any real testing on it. Thanks for posting the results you got. Back Monday and will post some of my thoughts as well. Only thought I have right now after seeing that is if the longer focal length might clip a little higher percentage of the power from the higher power diodes. Oh and broadband 400nm-700nm which I did not mention in our messaging. 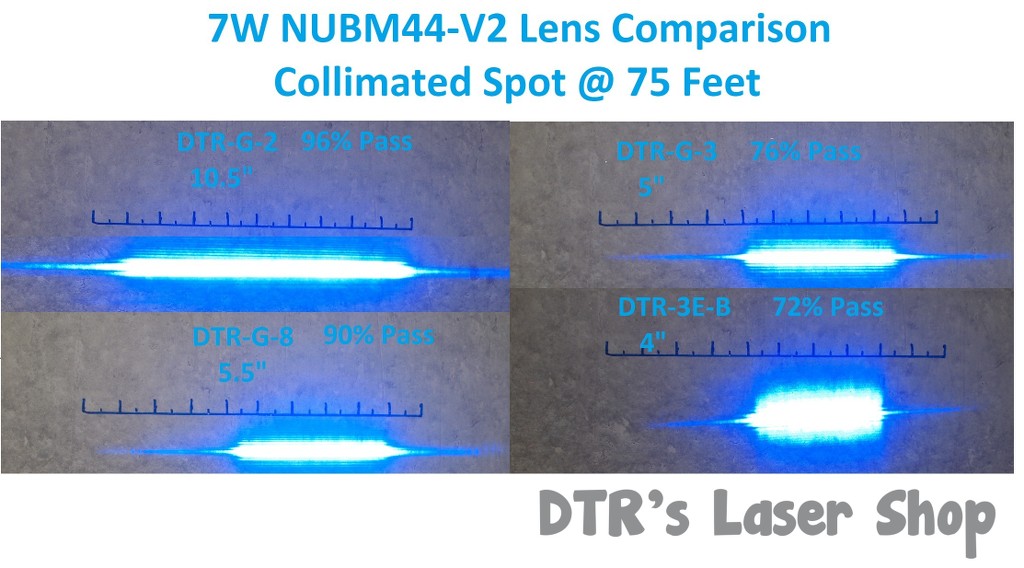 Nice, looks like all the benefits of the 3 element with only half the loss, thanks for testing, Red!

Thanks for bringing us another choice in lenses, Jordan!
I'll have to go check them out at your store right now.

Edit: Same price as the G-2's, will have to order some soon.

Hi, Wow now thats impressive results, it's great to see new option of lenses coming out. More choices are always welcome here.
Thanks Red for the leg work on these new additions to our hobby.

I am very happy to see them myself, my 7w+ nubm44s with 3 elements and 3X beam expanders are typically doing right at a little over 5w ......5100mw is common, 5200 with G3 but with this G8 I just got 5957, that's almost another watt at my target and the bar looks cleaner seen through my laser safety glasses when focusing.

The older 44's were doing around 6.8w and the new 44's are hitting 7.5w+ but divergence is the same is it not ? I know the nubm42 and nubm49 have worse divergence than the 44 and are not even as strong, but are you seeing something else with the newer 44's ?
I haven't bought any in a while...how new are you talking about ?

The nubm49 is a Gball diode and the divergence is worse than the 44 even though the output is less, I bought some to try out and now they sit in my tray, don't know what I'm going to do with them.

Just lost the topic, but I'm really sorry about this
I want to ask you, is there a diode that can be pushed to 10-11w, some people in my country have declared it, of course I know it is fiction
and lacks grounds, but anyway For sure, I still want to ask you guys

Not that I'm aware of but let me know if/when it exists.

Hmmm. Interesting. I will have to get some to try too.
G

Great info Red as usual
You have no idea how many times I almost pulled the trigger on some G7's from Sanwu till read all of your info on them.
The important things such as crooked lens placement, bad module threading and no real way to fix the issue's, etc..

These G8's brought some fun back..

Yes I agree, I too have been having fun with them and my only problem is I need more of them, I ordered more but right now I have to decide which lasers get them first.

I had been working with a BDR-209 and this particular unit is doing 750mw with a DTR G2, but you have seen how the beam in the night sky sort of flares out around the central spot far field, so I thought I would try a G3 and the far field beam/spot was better but the power dropped to 635mw which is not a big deal but hey......I like having my cake and eating it too, so last night I tried a G8 and it looks great, the spot is visible further out and the power came back up to 718mw

So yes it is fun to have my cake and getting to eat it too because that's what this lens is, the better G7 I always wanted.

Oh yes, I was really surprised at how well it did on my nugm02, probably the longer FL helped because it did not have that awful G2 artifact or as much of the 2 element 520 over spray.

Usually I use a lens flare hider to clean up that overspray like in these pics where I used a 20mm module and put a piece of rolled up black card stock in the module, I drilled the end out enough to let the beam out clean and still trap the black paper in place, you can also use a 12mm module but I thought the 20mm looked good on this one.
Note this lens is a 2 element 520 on a nugm03 but without the lens flare hider it had 3 and 9 o-clock spray, I did not leave the G8 on the nugm02 because I wanted to use it elsewhere until I have more in hand.

Hi Red,
What is the diameter of the out put hole in the fare hider? Thinking of machining some with a 9X0.5mm thread for a lens to fit the front diameter of the sinks instead of the usual focus adapters I include with my hosts.