dae said:
didn't really know where else to post this so here goes - I just bought and received a Sanwu Challenger II 3W 445nm laser in Single Mode operation with one 18650 battery for power - and I have not been able to get it to turn on for more than a brief second. Is there a method to unlock it that differs from the instructions on the site?

I did search around here a bit and saw someone having similar issues but that was with multi-mode operation.

I have tried single half presses, which prompts the beam to appear for a second-ish as is what happens when I power it on, and the same with 3 half presses and 5 half presses, or really any number of them.

Nevermind, I figured out the problem, and if anyone else is having this issue it's because your batteries are just *slightly* too short and aren't contacting properly. I had some slightly longer 18650's and those worked just fine .

ciscoyao715 said:
So there were a few reasons I went with the 470nm over the 445nm. The 470nm is such a true blue as where the 445nm comes across very purple to me. I have a 7W 445nm to compare it with and the difference in person is drastic but hard to capture on camera.

As to styles its All personal preference but i went with the style that allowed for 11 vials and did blue to match the laser. It came out awesome. The dimming switch makes an awesome burning tool as i use to aim the laser at first then crank it up when i have it on the object i want to burn. I know thats not its main purpose but I'm a bit of a pyro so dont judge

Build and everything on this laser was 1000% over what i expected. This was my first from Sanwu now I can't decide which to get next!

I am so f***ing close to pulling the trigger on a Ranger (probably one of the >1w greens, but I haven’t made up my mind yet), and I’d love to see yours for context and just because that sounds like it looks amazing.

Ive been having a hard time deciding on which style to go with. I think #7 is my favorite, but there’s no way I could afford to fill all the tritium vial slots, so I’m not gonna bother with that one. I love the look of #8 too, but I think I would only be able to fill 6/11 slots. #5 is pretty sharp looking also, and the plus side to it is that I could afford to fill all 6 of the vial slots.

Please post some pics, man. Or PM me some. I bet that rig looks

I’m specifically curious about the Red Guardian and Ranger hosts. I want to buy a G7 lens for them, but if they already come with one I don’t want to double up.

Also, should I order the 7mm or 9mm barrels for the lenses? What’s the difference?

Thank you for your time!
-Ryan

Edit:
Just found this. I swear I searched extensively before I posted this question. Dunno how this slipped by me: 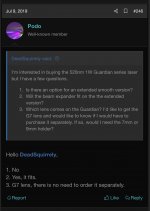 I’ve read elsewhere in the LPF (as well as in a review on the Sanwu website) that the Red Guardian does NOT have reverse polarity protection. I’m assuming this still holds true, but I wanted to be really sure that this was the case, as I have just purchased a 492nm 150mw Red Guardian. Can you confirm?

The page for the regular guardian has a section that states:

But the page for the Red Guardian doesn’t state any of that. Does it have any of those features? Is it just lacking the RPP or is it lacking all of the above features?

If it is in fact lacking the RPP, I think it would be really nice to include a note about the lack of that feature in the information section. I think that would possibly/probably save some folks some heartache.

When I see that almost all of Sanwu’s other lasers include that feature (as do most high-end lasers), I’m more inclined to think that whoever made the web page accidentally forgot to add that paragraph about the “Battery Protection”, rather than the paragraph being intentionally omitted because the laser does in fact not have those features. Does that make sense? I don’t know if I’m explaining that well. Essentially I think it would add a lot of clarity and reduce confusion to include a note that specifically states the Red Guardian doesn’t have RPP, since most/all of Sanwu’s other lasers have it, including the regular Guardian.

steve001 said:
One thing no company is offering are lasers with beam shaping optics. Personally I quite find lasers that produce a line and not a round spot a very compelling reason not to purchase. I had my eye set on buying a 462-465nm laser until I found out the diode produces a line, not a spot. Beam correction optics could be offered as a laser ready made or as an optional add-on.
Click to expand...

The Sanwu x3 beam expander goes a long way in correcting this. It certainly tightens the beam right up over a long distance. I tried it with both their 1w 635nm and 5w 470nm, makes a huge difference and a good fix at $55!
You must log in or register to reply here.
Share:
Facebook Twitter Reddit Pinterest Tumblr WhatsApp Email Share Link