Shmackitup said:
Yes, I pulled one from an NEC
Click to expand...

I'm sure you already know this but you can buy a TECs dirt cheap on Amazon or eBay. This is just the ceramic junction itself, no driver, heatsink and or fan.

Years ago I bought a dozen just to play with, cost was like $30. They worked for a bit but eventually burned them all up, didn't know they had to be current regulated. Lol!

Several years ago I purchased quite a few different sized TECs from 15mm square to 40mm square. They were all dirt cheap and have used them for everything from LPM sensors to active cooling. Still have some left.

Has any more information on these diode arrays been discovered yet? It was a number of weeks ago (months, actually) that at least a couple of members had units undergoing testing and what was shown looked very promising... but vital information such as whether or not the outputs were actually collimated/focused properly at a distance of more than a few feet was just short of being known. I'm just curious and a bit surprised that testing these has been shelved for so long considering it's the only new diode(ish) to come around in what seems like forever.

If these were more affordable more members could purchase one at risk just to test it to see if it's usable for something serious but given the price we're relying on members already owning these to help us make informed decisions on whether or not these will be useful.

It's a lot of waste heat in a small area, the cooler will take up a fair amount of space making a compact HH more difficult and the active cooling setup will need to be regulated to keep the array temp within a pretty narrow range, that said it could be kept a bit cooler than spec and subsequently overdriven but temp control will not be as simple as a chunk of finned aluminum, a TEC with a big chunk of copper behind it as a reservoir could be used for a short duty cycle but observing the duty cycle based on reservoir saturation will be critical, a few seconds too long and you could cook it.

These are made to be used with a remote radiator/fan and TEC cooler at the array and it is a lot of waste heat with the constraint of fairly tight temp control, these are not favorable to the HH hobby but they are interesting and will be built into some cool devices in time, but by a lot fewer people which is likely what they want.
L

yes this is what I asked the happy 31T owners to do as well - check how parallel the beams are and how well focused. Without this info anything long range can not be even discused. I do not think that LPF members who bought it did this just to burn balloons what you could also do 10 years ago with a simple red/green ponters from Dealextreme...

For example, I found (in my threads) that NUBM08 block has all 8 beams fairly parallel (centers of all spos at 5m fit into 5x4cm square) but the collimation by G-balls is not homogen. Nowing this I could design an optical trail to combine all of them pretty easyly (because they are parallel) but the resulting beam divergence is high due to some beams diverging faster than others.
Now I am trying to do similar thing putting 7 G-2 collimators over a NUBM44 block and the result is exactly opposite - I can get very good collimation but beams result not parallel enough (spot centers hardly fit into 20cm square at 5 meters) to use same cylindricals-Knife edging-PBS set I used for NUBM08. My CNC made multi-G-2 holder was not as precise as Japanese factory installed G-balls. So I am thinking how to solve this problem but first I had to see it.

Apparently this 31T block is not unique in its art. In taobao we saw a chinese made 4x6 array for 1700yuan stating 90W ouput but no info about dimentions. I will ask a colleague working in china to bring it to me but it might take months before he comes here again to visit us.
L

A litle offtop about TECs:

A week ago I played with this ice cream maker: 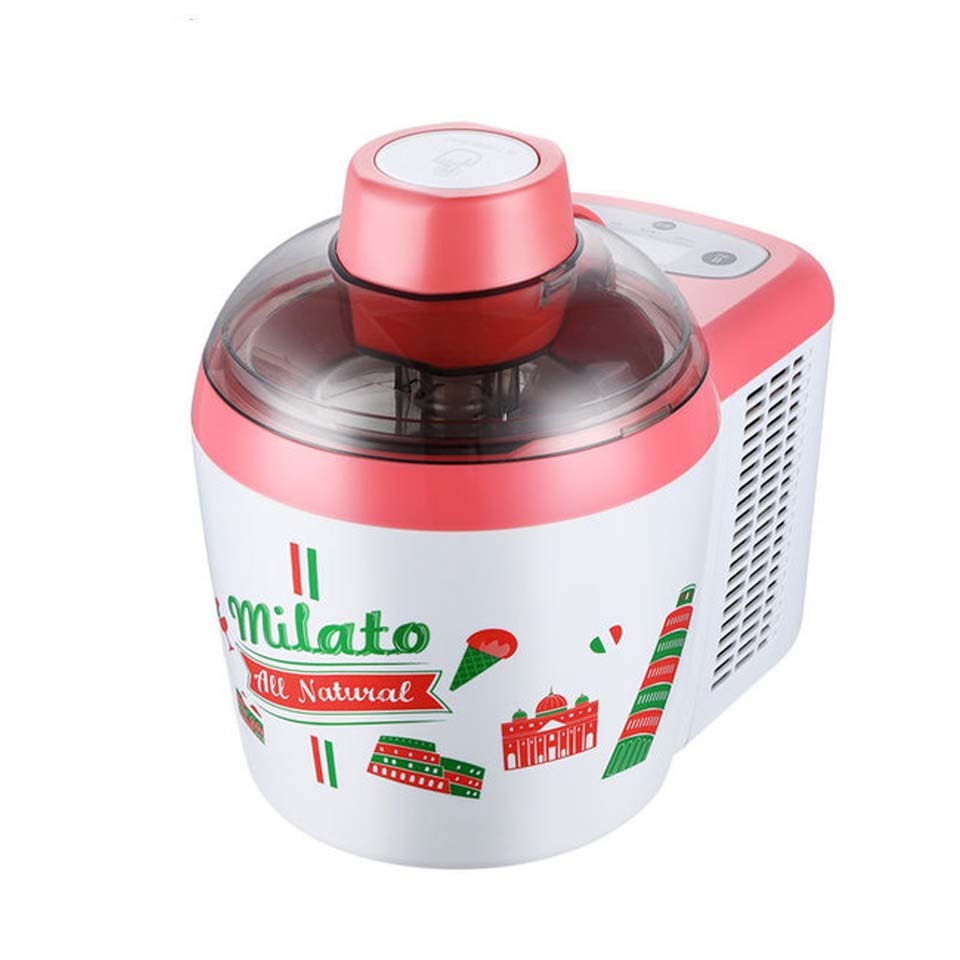 Considering it consumes 90W as written I found the TEC efficiency to be 27% isothemically (I mean at start when temperatures are equal from both sides). So once turned on it starts to chill 500g of water at a rate of 3.5ºC pro 5 min = means takes 1750 calories in 5min = takes 24.5W (27% of 90W) from water to HS.
Then dismantled it and was surprised that it only had one TEC inside (I thought I would find more than one), but huge HS and huge fan and the Al bowl fully isolated by adhesive foam - so there were no screws and I had to saw the body and cut the foam to take the bowl out...

I do not get why people want to make a portable from this 31T block - I would not dare to use it ouside but only in the lab or indoors. To play with such a 95W output array I would just attach it into this ice cream maker instead of TEC (for this no need to take the bowl out) and keep some ice in the bowl. This would be capable to conduct away 200-300W of waste heat produced by this array at full power untill ice melts.

Otherwise one would need 10 TECs like this to extract the waste heat if trying to keep this array at rt. Sure there will also be an additional heat flow just due to T difference if the array is kept at higher T but here I can say nothing - all this has to be experimentally tested...
Last edited: Nov 10, 2019

Finally got around to messing with mine! I'm running all 4 strings of diodes in parallel at 3.2A per string. Beams aren't perfectly aligned but look better than I was expecting.

The raw output power of visible light in a handheld laser is INSANE! I think the beams point slightly inward or at least spread out in a way that generates a hot spot in the beam intensity a meter or two in front of the array. Everything lights on fire