These diode blocks can also be found in newer compact laser projectors. You may be lucky and score a broken one at a good deal.

85w array is only $208 and driver $68 on ebay, so I bought it.
Took 5 days to arrive Now must make a heatsink... Inspired by: Styropryo's youtube video. Thanks
J

Is that the PLPM4L? I saw that just after I purchased a new NUBM31T. Pretty good deal. Very keen to see its beam characteristics.
L

Apparently no one after likevvii posted spot pictures of 31T in this thread.

So I bought a new 31T from ebay and tested each row one by one using same ice cooled small tank, which I made for testing Osram chip earlier. Used same contacts in order to avoid soldering to chip wires directly.

The millimeter paper of today is bad, so I made more contrast lines with a pencil!

Here unlike in Osram chip all rows show spots of the same square shape at 5 m distance (0.5A current), and all LDs together show a similar square spot which fits into a 50x50 mm square. The spot even looks to be of 40x40 mm size. This square shape says to me that this thing was made for focusing and cuting.


I connected the rows as 2S2P (2 goups of 2 rows in series, it needed longer wires than with Osram chip, where the polarities apparently were designed for 2S2P), but first surprise:
BST400 DC booster driver which delivered 4A at 52V for Osram here could make maximum 5.7A at 40V with 24V input and its fuse became super hot...

Anyway BST400 delivered just a little less than I wanted to reach: 6A that would make 3A curent through each LD.

So here was the limit of my old driver and other cheap drives coming from ali could not make better - even BST-900W, which reference I posted in post 140 of this thread.

So it took some time to get a new bench power supply CPS-8412 which can deliver 6A at 42V easily.

Once focused by the PCV lens the spot at 20 cm looks to be 2x2 mm by size and at 6A cuts easily in 3 seconds (I could not check faster) through stainless steel 0.4-0.5mm thick. 5 or 10 seconds just make bigger holes. All time I had some ice in pot to keep the chip at room temperature or lower.
Moving the spot produces a pretty fast cut.
For comparison the holes made by Osram chip are above and are bigger due to worse focus and bigger spot, it also took more seconds to cut through.
On the left there is a spot left by H1650 block - which has a very bad focus at all.

You bet me to it. I've just set mine up on my 3D printer as I begin to search for an optimal lens configuration. I currently have a 50mm/40mm FL aspheric condenser in front of my diode block but it isn't able to bring each beamlet into focus. I have found that a 3"/75mm FL lens can, as well as a 2"/150mm FL lens can also. None of them achieve the spot size I'd ideally like however. I want to explore what is possible with either a set of anamorphic prisms or a reversed beam expander configuration next. I also need to get my hands on a beam profiler.

This video possesses no value other than entertainment but.. it works! (at 24W) 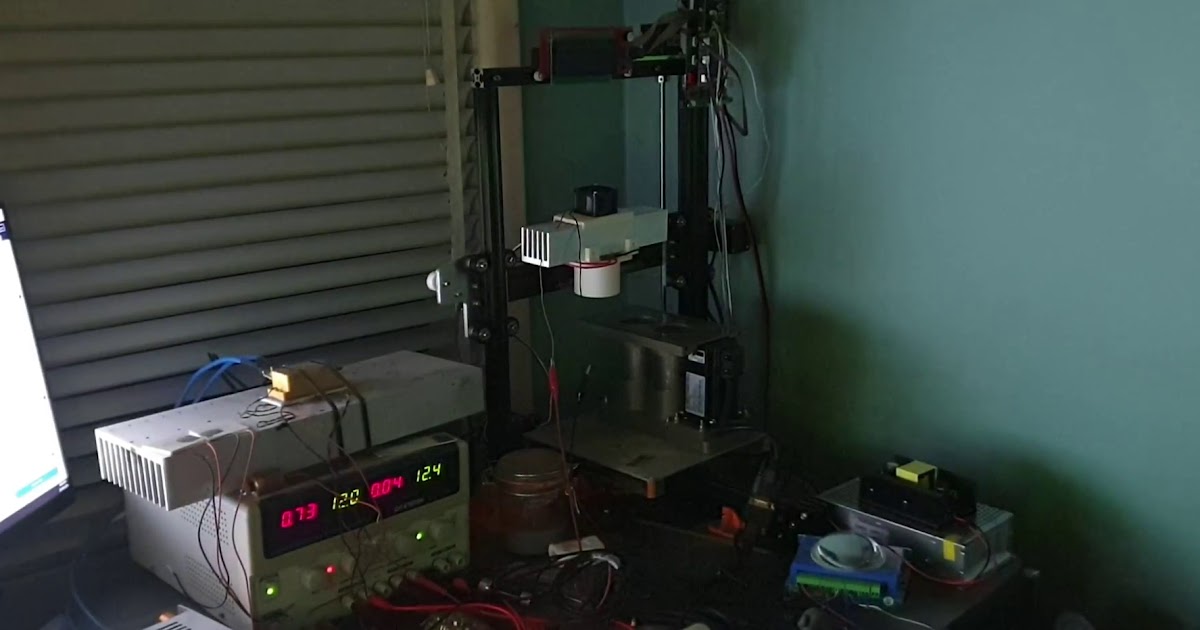 Were you not able to use the dedicated psu you bought? I have the same one as you posted on the last page and have been powering my unit with it, driving it off the 12V supply my printer would typically use. I don't think the supply could handle full power as it's only a 12V/20A unit but it'll be enough.
L

No, I did not try that dedicated driver, it was for Falcon body where it could be feeded by a LiPo capable to deliver 20+A at 12V. I also cut a litle of its Al edges to fit in the body better... not even sure if the driver stays intact after that.
Do you use TTL modulation in it or just all time at full power?

These arrays were built for laser projectors pairs with phosphor wheels. The best balance for intensity/efficiency/max output is at 2x2mm. Any smaller would overheat the PW (phosphor wheel) resulting in reduced efficiency and maximum power output. Any larger and the efficiency and max output would definitly increase but the intensity would drop.
The PW I have seen are rated and tested with a 2x2mm output area.

When you focus the nubm31t, you would normally get a 2x2mm spot size for this reason.
___
How to get a smaller spot size is to free the multi-lens and increase its distance from the diodes.
I've been wanting to do this but I don't know what glue to use to remount the multi-lens

The gang lens on my osram array would not focus cleanly at distance, I bet the N31/34 will be the same, the lenses are not aspheric and the spots will have large wings when you adjust the gang lens distance to try and get a good infinity focus.
L

RedCowboy said:
The gang lens on my osram array would not focus cleanly at distance, I bet the N31/34 will be the same, the lenses are not aspheric and the spots will have large wings when you adjust the gang lens distance to try and get a good infinity focus.
Click to expand...

You were able to remove the lens and test the distances?
J

Light superglue said:
Do you use TTL modulation in it or just all time at full power?
Click to expand...

I'm just using continuous power, adjusting the current control pot. I have played around with the TTL and will be using it soon enough.

likevvii said:
When you focus the nubm31t, you would normally get a 2x2mm spot size for this reason.
Click to expand...

What is it about the beam that limits any finer focus?
Last edited: Sep 28, 2020

The gang lens is held with little spots of glue, you can see them down the side of the gang lens, it's easy to pry/break the lens free and replace it in the same position, I adjusted the distance by hand and the spots were not sharp, it appears the lens shape is not good for infinity focus.

Was continuing the trials to cut steel.

What is interesting: stainless steel 0.4-0.5mm thick is easy to burn (3 seconds are enough) but with carbon steel it does not work. I looked at thermal conductivity and yes - at carbon steel it is 3 times higher! So everyone burning cans in youtube can do it because cans are made of stainless...
Also could not cut Al - here conductivity plays against me and also the reflexion is higher.

Attempts to burn through a thicker stainless steel spatula (1 mm) only worked (15 sec "exposition") once when the spatula was bent to be not vertical - likely because melted metal flew down. In vertical spatula position the melted metal spot apparently does not move and stays where it was.

Also, similar holes could be made with 2xNUBM08 blocks device which I had from techhood. In this piece to my full surprise ALL 16 LDs were collimated well by ball lenses unlike they were in both single 08 blocks I played with before!
So, this piece turned out to be a pretty good one and plugs/contacts for its PCB connector were not as difficult to find as for JST sockets (who has ever tried to drive full NUxM blocks would understand me!).
Focusing with big enough lens also at 20cm gives a linear spot 1x2mm which burns through same piece of stainless in 3 seconds but makes holes much smaller than NUBM31T.
Indeed the input energy is same about 240W here: 3.5A at 68V compared to 6A at 42V for 31T, what means that output power can be quite similar...

Lower spots were attempts to make holes with single 08 blocks.

Have you got another large PCX lens you could place infront of the current one to increase the power density?

Do the sanded surfaces cut faster?

EDIT: Here's what I managed to achieve with a focal length of 90mm @ 39.4W with an exposure of 2~3 seconds. I'm guessing your cuts are largely pyrolytic rather than photolytic, hence the quality. I assume these razor blades are stainless though.

Hello everyone! I have a NUBM31T on the way, should be here any day. Unfortunately, looking at the data sheets that I could find on it, I'm concerned about power connections. Could someone here post the correct voltage and wiring to each pin? I don't want to fry a $300 array in the first fraction of a second of operation :-(
Much appreciated!
J

The side with the QR code is positive, roughly 20-22V per row.
P

A guy named styropyro on YouTube has a video with a blue diode that looked like that and I think he said it was 100 watts. I’ll see if I can find the video. I actually thought about emailing him to see if he could build me something