paul1598419 said:
Aren't these diodes more expensive than just the plain diodes available to us? I just don't see the utility in using them for much except maybe as an engraver. Seems like you must jump through a lot of hoops to get a reasonably collimated beam while the stock diodes do that much more easily. Still can't see the what is to be gained over using cyl lenses.
Click to expand...

Using a non fac diode with a G2 and c-lens pair is better because you get a better beam and you can use a beam expander after, also able to knife edge but if people just want to get a tighter/hotter spot at distance without using c-lens pairs then this fac diode and a larger/longer FL collimating lens could be used.

I was concerned about how much a single FAC could help this diode but I was also hoping to be surprised and using a larger longer FL lens was one of the 1st things I tried but I was also hoping for something ( closer in appearance ) to a Gaussian beam like we see from dpss lasers but apparently that's not in the recipe.

I don't see these fac diodes as the " FIXED " diodes we dream of but they could have some application, personally I would rather use a c-lens pair because we also need to keep the can window dust free to avoid burn on damage and because you can use the readily available 3X beam expander after a c-lens pair, it's not that much more work when you think about it but if we had a lens picked out for each fac diode and ready made hosts to hold the lens and diode then they could be popular with burners who want to get off the desktop or for home CNC use.

But this is just the fac-nubm08.......the fac-nugm03 from what I hear is possibly more useful with our standard lenses but we shall see, also the fac red diode but it has such aggressive divergence that it will likely be worse than the blue, even the pics of it's raw output look messy IINM.

Alaskan said:
OK, great news, then it appears we can indeed use FAC corrected diodes, just that we need to use longer FL larger diameter lenses. Too bad we can't use our ~6 mm diameter lenses to knife edge together with smaller beam diameters without adding additional corrective optics. Two steps forward and one back, but at least a step forward overall
Click to expand...

Yep. More like 1 step forward through a mud puddle with bare feet bet we're getting somewhere.

RedCowboy said:
Yep the longer FL lens makes it work, the spot is not perfectly square but great tight spot, burning this shelf board 5 meters away at only 300ma

Hey that's awesome, I'm happy to see that worked. Now I'm curious to see if a ~35mm fl colli as to split the difference still results in a reasonably tight beam with a smaller cross section size at the lens (thinking for applications focused to infinity) than the 1 inch@75mm fl that you're reporting....

The longer your focal length the further from the diode your lens will be thus the wider your beam will start at your lens and the tighter your spot will be at your target.
Your lens should be wide enough to accept the diodes output ( which is diverging rapidly ) and fill up no more than about 80% of your lens to avoid spherical aberrations although with a thick edged lens it's not as critical from what I've seen plus it's MM so ehh

I wonder if the beam can be focused to a tighter spot when using a longer focal length larger diameter lens because with the beam wider from the start, there is then less divergence to the target as it converges upon it and thus possible to tightly focus to a finer spot?

jors said:
I purchased 2 units 638nm TO-5 1,2W FAC Square spot. Not useful for me. I can sell at lower price. PM if interested. Thanks!
Click to expand...

Jors, what is it about them which does not make them useful for you?

Alaskan said:
Jors, what is it about them which does not make them useful for you?
Click to expand...

Yea...Projector Application demands small Near Field....But HH do not demand this !!!
BTY...I continue to experiment with these FAC units....Maybe I will get to the Red FAC tonight.

And....well...yes...a single convex 50mm diameter Long EFL will focus the divergent beam down to a smaller dot...well at a given Mid Field target...that is fine....but...I want a long small diameter Rod of Photons, not a cone...But that is me....I am almost never satisfied !!

We need a Quantum Leap in LD technology !!!!!!!! It seems as though....current technology has hit a wall. Still waiting for that 5W Red with correctable properties.... HAHA...so is X-Laser, Atten Laser and Kvant....Nope !!! Something really innovative !!! 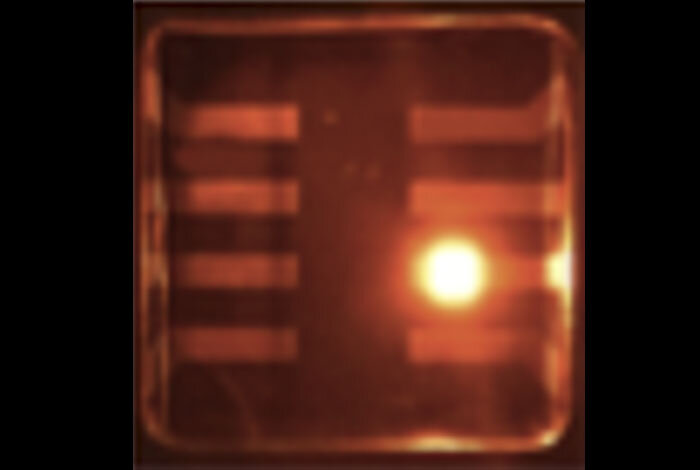 Colloidal quantum dot laser diodes are just around the corner

Los Alamos scientists have incorporated meticulously engineered colloidal quantum dots into a new type of light emitting diodes (LEDs) containing an integrated optical resonator, which allows them to function as lasers. These novel, dual-function devices clear the path towards versatile...

Hmmmmm...seems like a job for...." Terrawatt Labs " Maybe TWL could give the Los Almos boyz some help....Hmmmm 'Population Inversion'. is the final hurdle !!! ....I like the sound of that....I dislike the general population anyway.....hahahaha !! EEEeeeerrrrrr…wait, the general population buys the 8K TV's....which drive Laser LD research....which eventually trickle down to us....to quell our thirst for new and improved !!!...Go buy a TV !!

WOW....what I am reading about these sounds fantastic, gas laser like performance and any wavelength, good temp stability and wider operating range, it all sounds good as supposedly will be cheaper to produce.
S

Far field is defined as any distance beyond the Rayleigh Length. Which to be precise is the distance a beam expands 1.4 times its diameter at the aperture, with or without optics.
S

CDBEAM777 said:
Well...For sure...The C-lens Optics...When combined with a G8 and the Blue FAC....well....I can get the geometry down to a 1.25 mRad....BUT....The Geometry of the Mid Field Beam, say @ 14M....is a compact " S " shaped....and I am still trying to correct this !!! I should add that I truly dislike the " S" shape ! Adjusting for CLens Pitch, PCX=> PCV distance. and distance from LD => CLens set....no combination has yet to eliminate this Abberation. It is very possible, NO improvement can be realized !

Anyway...I will trial the 75mm EFL Convex with NO Collimation lens. I have the lens....so...FREE try !! LS...If we must allow the Blue FAC Raw output to expand....THEN Multiply the Fast axis to leverage and achieve reduced divergence in the Mid/Far Field...GREAT....OK....But...In my Supercar build...I achieved a very good divergence with the combination; NUBM044 + G8 + 6X CLens set..

So far...we are still trying to tame this Blue FAC... just because....Well...I have a personal reason.....BUT...really....WHY ??? The most powerful NUBM044 has been tamed....IMNSHO....with almost NO ABBERATION....The Green FAC is a keeper with 3E Collimation....and...I have not yet started to experiment with the Red Fac...but I expect it to act as the Blue FAC. Then again....this hobby is full of surprises….And just when I start to get...er...ah...overconfident....I get slammed into the Floor of Humility !!! Oh Well !! Will report back, CDBeam

ADDED: We will never achieve a perfect X=Y aspect....well not with the Standard PNP junction configuration. We will get closer to X=Y...but never perfect. The greater the beam propagation....the more visible this "X does not equal Y" condition will become apparent !!. I again refer to the great benefit of Parallax View !!! It is a good thing !!!
Click to expand...

This single 75mm lens will function as a collimating if you place about 75mm from the diode.
S

Alaskan said:
I wonder if the beam can be focused to a tighter spot when using a longer focal length larger diameter lens because with the beam wider from the start, there is then less divergence to the target as it converges upon it and thus possible to tightly focus to a finer spot?
Click to expand...

Are you just agreeing or have working knowledge or a reference? Also, my take on Bob's FF comment was just meaning in the far distance.
S

Alaskan said:
Are you just agreeing or have working knowledge or a reference? Also, my take on Bob's FF comment was just meaning in the far distance.
Click to expand...

I am not questioning the definition, just think he didn’t mean it that way nor have I in the past, in the far distance would be a better way of putting it less someone challenges a choice of words. Yes, I understood you were googling it.
You must log in or register to reply here.
Share:
Facebook Twitter Reddit Pinterest Tumblr WhatsApp Email Link