My laser collection - Show yours

Problem is there's 4 more cases and they get better Honestly feels embarrassing but it's reality. I think there's some old posts that show everything I had back then but things just feel different to me from when I first joined.
There are lots of members that have nicer top end units than I do. I Pretty much have a wide variety of stuff that may not make much sense but it is what it is.

How long did it take you to get so many p-man?

Well, first let me reiterate that I likely have more lasers than anyone here BUT that just means I have quantity which has nothing to do with quality.
The actual answer to the question of how long have I been collecting is about 2.5 years as I had some before joining in Nov. of 12

There's new members here all the time and don't know enough about me but let's just say I have serious kidney pain issues and I've used building lasers as an outlet to not focus on my pain. I've been dealing with it since 1989 but was medically retired from the Navy after 10 years service with a 50% disability between Navy and VA in 1996.
Went back to college and learned a very different trade than what I did while in and since 1998 have worked as a Commercial/Industrial Refrigeration Technician until going out on Workers Comp in April with a bad shoulder injury. There's little possibility at this point that I will be able to return to what I've done for all that time.
Finding any kind of distraction is WAY better than just doing nothing when dealing with pain because all you will have to focus on is your pain.

Since the story is out again I might as well just post the rest BUT there's nothing special about owning so many. There are so many members that know WAY more than I do about all this stuff and I rely on them to answer my questions. I try and give back where I can and come up with new ideas but the idea part isn't getting easier and I post so much because I have the time and this is the only forum I belong to.
It's going to be an interesting year for us as my wife also has a medical issue called IC (which is something called Interstitial Cystitis). Finally got a diagnosis after about 2 years of trying to figure it out.
Hey, it is what it is as far as our health goes and we deal with it Maybe this year I'll have to sell all these off and I'll have none. That's life and it's OK if it happens but for now I don't plan on it. For me the fun is more in the figuring things out and building. In some ways it feels like a let down when I finish a project. These are a reminder of part of what helped me get through the last couple years in constant pain. I don't believe in ever giving up. 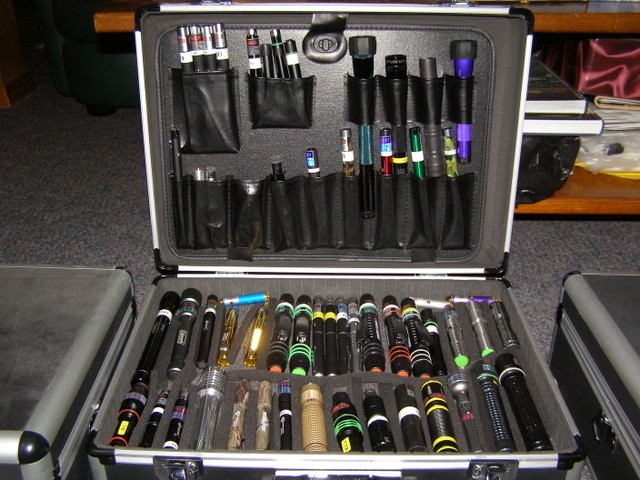 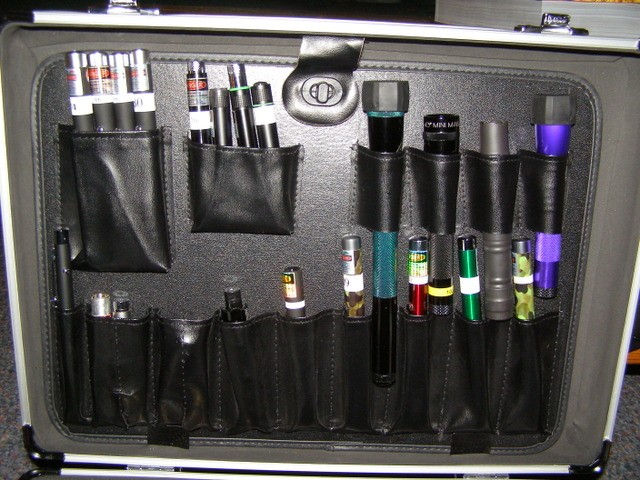 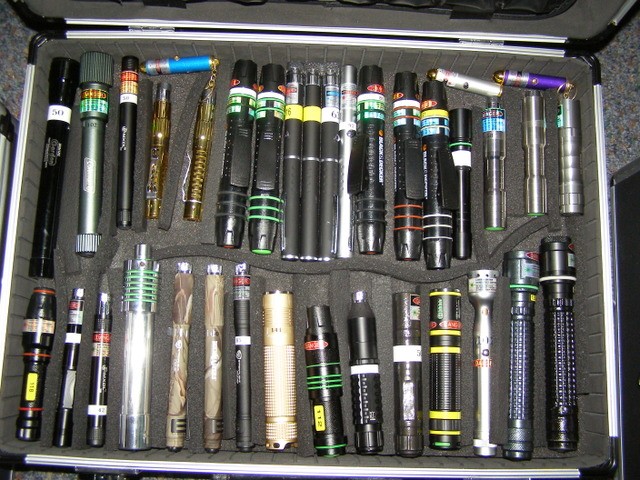 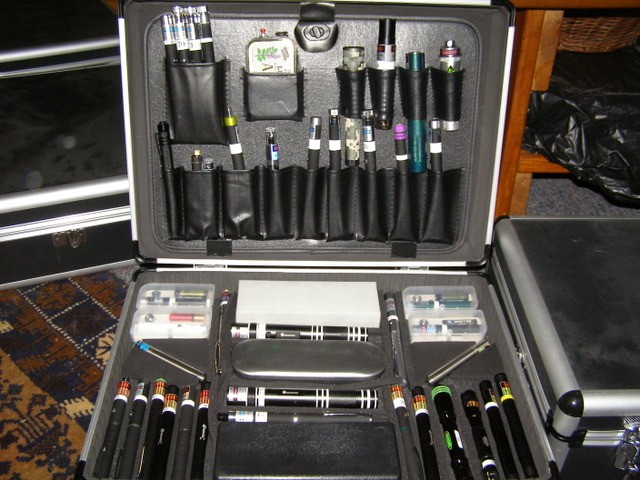 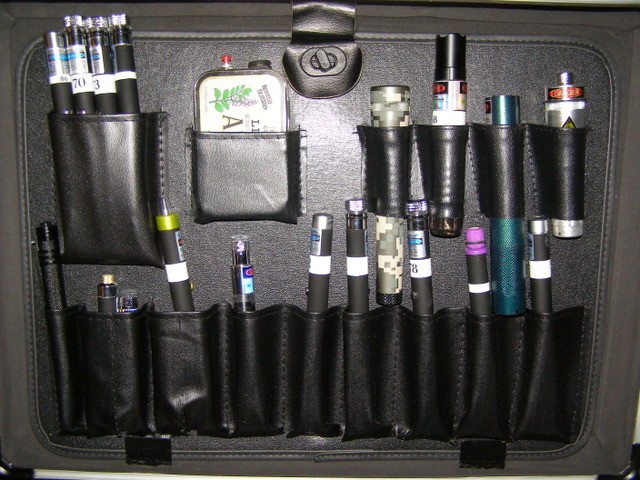 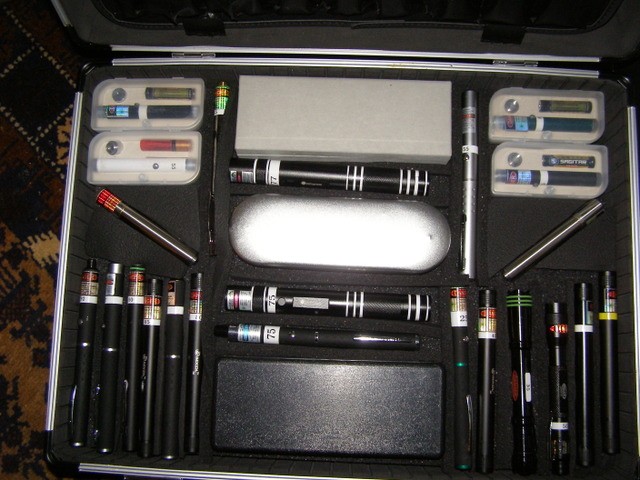 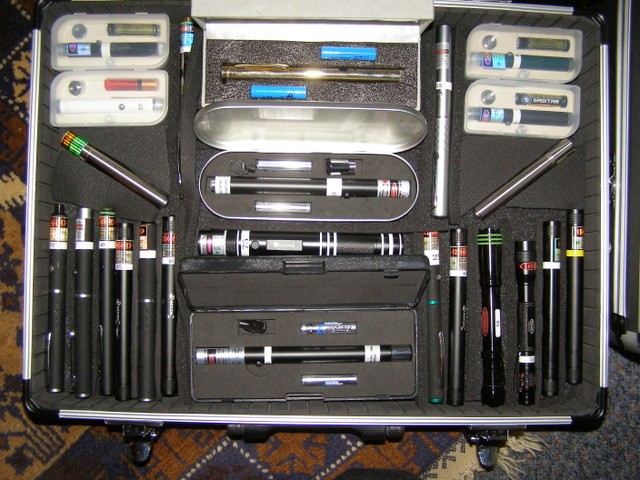 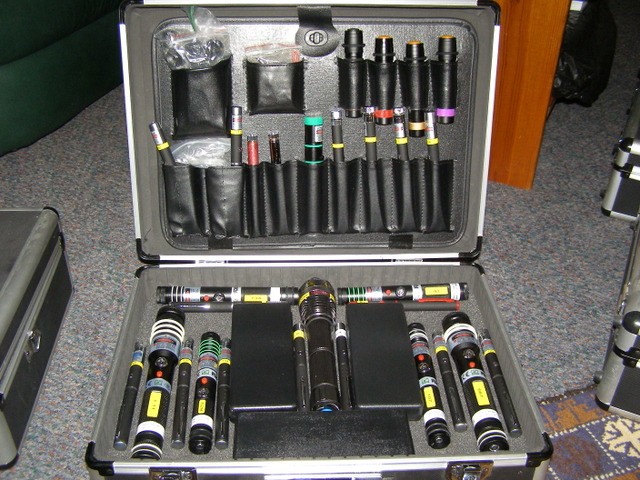 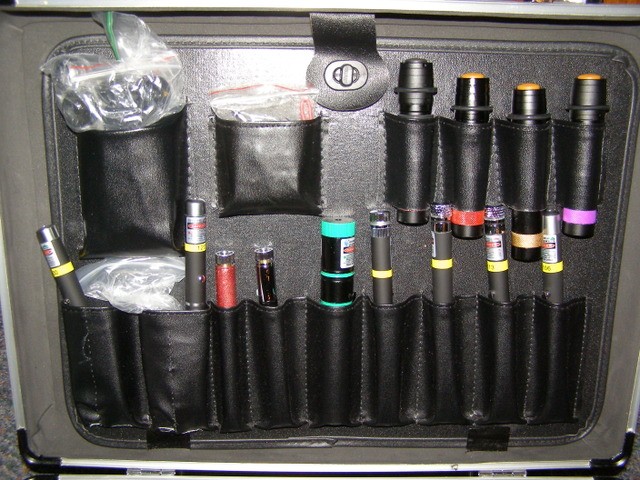 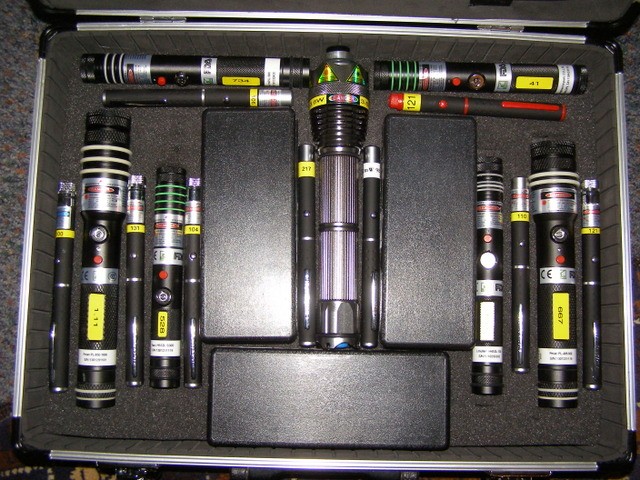 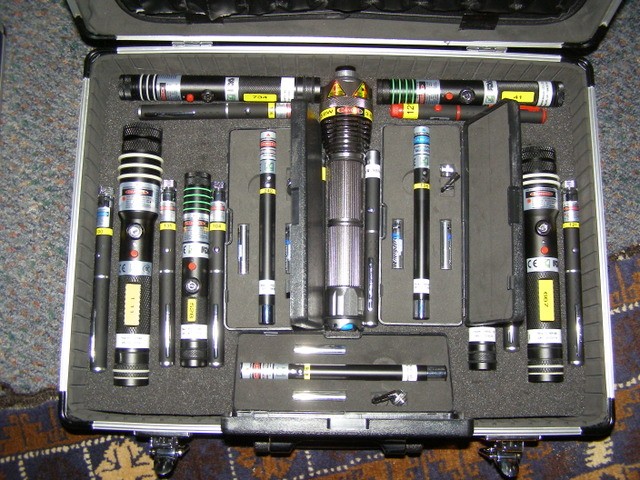 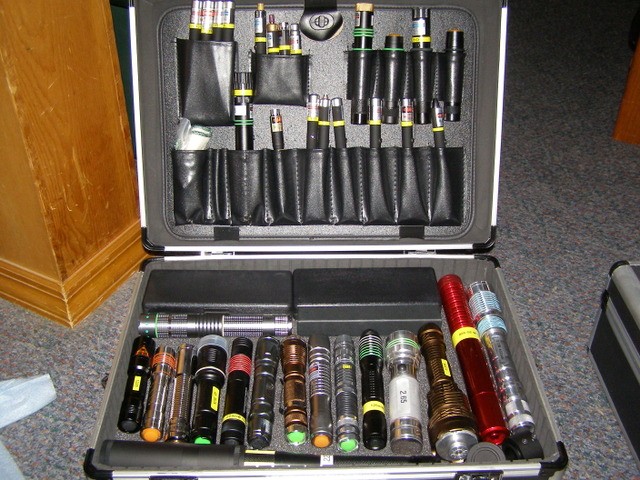 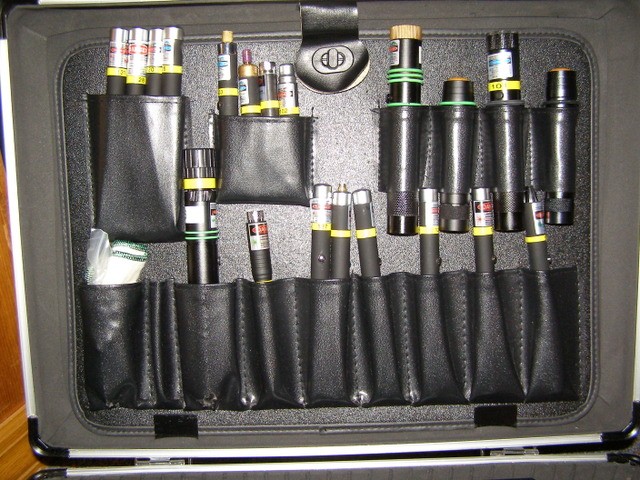 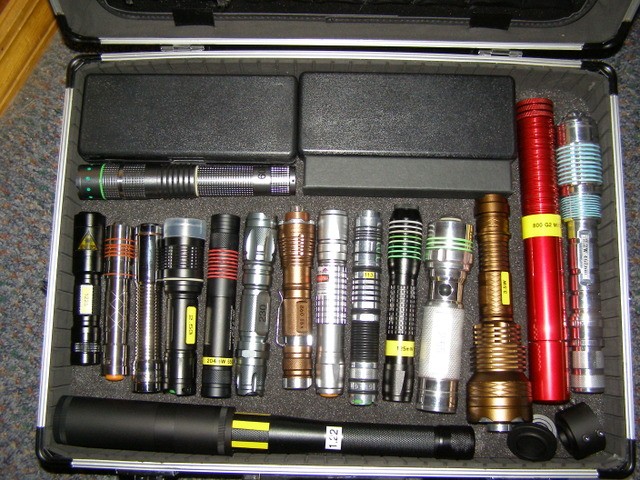 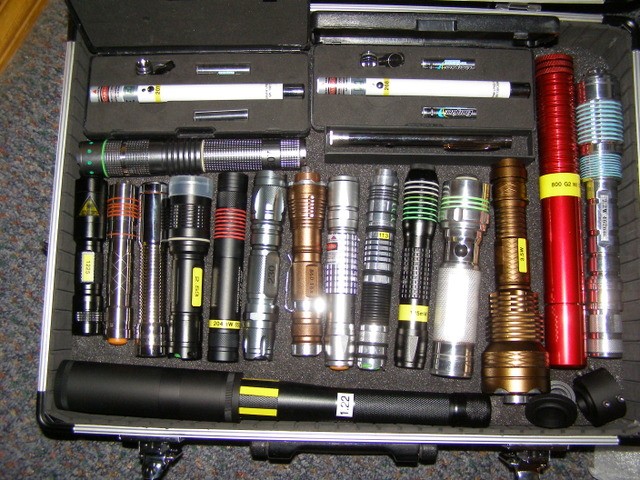 Any unit needing it is wrapped or separated so they don't touch each other. Units touching are only for the pics.

This is how for instance case #6 would actually look like: 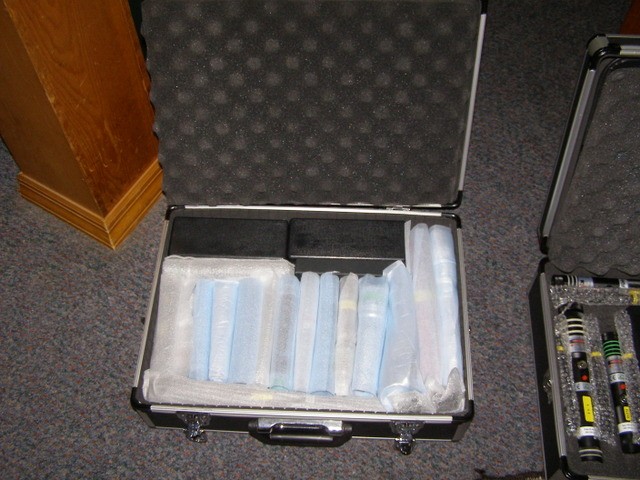 So in case you see this Isaac, the 589nm will be well protected and cared for and I can guarantee you the on cycle won't be more than 10 seconds other than to measure the output and see what I get compared to what you saw. I have a silver case that is currently just holding some hosts ready for building that I'll likely put it in if it doesn't fit in with the smaller Phaser case.
The last full case has the 1.5W 520nm I put in a Sinner host. It's the third one from left all chrome plated copper. Hadn't shown anyone yet.
The really long horizontal one is just a Spartan 445nm with its corresponding 2X beam expander attached. Like many here, the Spartan was my first high powered laser and I think cost me well over $300 with shipping.

I would say there's another 25 or so pen type units scattered around the house I think plus I carry a 532nm one in my Bible case as I give one away every now and then to someone at church who I know are responsible. Gave one to a commercial pilot friend of mine who usually sits behind us who loved it and was trying to figure out if he could bring it on the plane with him. He said that he has never seen one in all his years of flying and I was certainly happy about that. I'm hoping that means that it is actually WAY less likely that people are shining these at planes/helicopters than the news wants us to believe. He's one of those experts that they interview on the news when something bad happens. Remember that sensationalism sells.

Wow Pete,
You're such a great guy I wish you didn't have to live in pain. I have a chronic back injury from work that I deal with bouts of constant pain a few months out of every year and I understand how crazy this can make a person. Im glad you have a good way of dealing with it by making lasers and gifting them to lucky people like myself. Great collection.
Cheers buddy,
Jeff

Edited to ask- would you mind taking a pic of your favorite laser if you have one and telling us why its your favorite?
Last edited: Jan 14, 2015

I have to head off to therapy in a few minutes but I'll get back to you on that one. Just waiting for my car to warm up as it was -13 in upstate N.Y. when I woke up and my prius plug-in takes a long time to warm up with such a small engine. The one thing it does have though is the warmest electric seats of any vehicle I've ever been in. They help compensate when it's so cold and to help save gas as you don't need the engine for A/C but do for heat.

No, I'm not a tree hugger and go around telling anyone they need to save gas

These are my favorites. Now I apologize if I'm missing anything in the pic here but the reason why they are my favorites is simple. People gave them (or at least parts of them) to me with no strings attached. Just for being a friend.
Initially when I joined I couldn't accept anything from anyone and it took me quite some time to realize that if I don't accept what others give me then I'm robbing them of what I feel when I give. Just understand that I'm answering the question with actual units because that's how I was asked and it has nothing to do with being friends with anyone else who haven't given me something I can hold in my hands. I just don't look at things that way and it would take forever for me to thank everyone personally for the intangibles (I think I'm using that word correctly?) over the past 2 years. 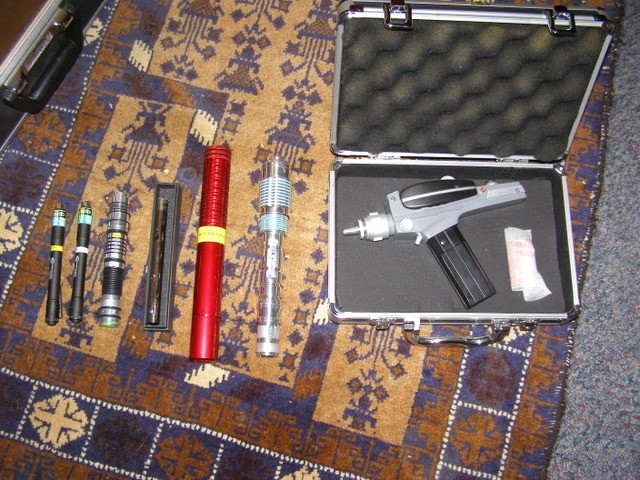 Not much of a collection, had more, but I didn't work with lasers past few years I had the opportunity to purchase quite cheap almost new A140:

Pman!!! Pete I take it? holy crap dood!!!! can we get a beam shot collection?! or is that gonna open a worm hole?
As a full time mechanic I can tell you that those prius can take awhile to warm at idle. It will only kick on the gas engine when is has to.. which is really the only source for HVAC heat which can take awhile.. some of the newer ones have exhaust heat collectors but it used for every reason but HVAC. Love the pics you guys!! I'll have to post one when I think I'm ready HA!
Last edited: Jan 27, 2015

My plug in has everything you can possibly get in one (2012 advanced model) and I also have a 2010 Lexus HS250h (Lexus first hybrid) and they have the exhaust recirc and it was also their first car to use regular gas.

Here is my collection of handhelds, not including my argon and 5 helium-neons.

TGW, what is that unit on the left? Like the part that has a diamond cut where you would hold it especially. Thanks for sharing.

.3lite said:
Not much of a collection, had more, but I didn't work with lasers past few years I had the opportunity to purchase quite cheap almost new A140:

A140's have some cool schtuff in them. I got one for a good price a while back as well, sold all the diodes though.

Pman said:
TGW, what is that unit on the left? Like the part that has a diamond cut where you would hold it especially. Thanks for sharing.
Click to expand...

Thanks! That is a 473nm Jetlasers Pl-E Pro. It's a real pretty host, but the crystals are all out of alignment and it's only putting out 20mW on a warm day(5mW if it's cold).
T

Well, now that I consider my collection complete I guess I might as well show it!

and not to forget this baby:

and of course, these are as much a part of the collection as the bits that emit light:

I might eventually require a HeNe in the future, and some other obscure DPSS wavelengths way down the line if they come up, but for now I consider my collection complete in that I have the wavelengths I've always wanted since I started out.

That's a lot of lasers!!! Awesome collection you have there! :bowdown::drool: