Well i got everything soldered up, checked and double, triple, quadruple checked everything, applied power and guess what? The magic smoke came out. $32 bucks in the trash. This is why i was asking about making my own driver. Has anyone else had an x-drive that did nothing but smoked? Less than thrilled about it. The chip that the guy sands the part number off just went up in smoke. Not happy. If i wanted to waste $30 I'd go buy a bottle of whiskey. What did i do wrong?

Well the only thing I've seen an x-drive do is smoke... I can't say i share your opinion of them.

Please use x-woosse driver
DTR sell thêm,or you can buy on ebay
Seach acs5500bu
It have reverse protect

Well thats not the healthiest way to put 2 18560 in series..
Are you sure nothing melted in the JST connects? or twisted and touched?
I feel for you big time

Where did you buy it?
If from DTR ---ask if he can help and if you can send it to him so he can determine what went wrong/why only smoke.
If not from ask whomever or ask DTR anyway.
Could be something in your procedure that was not done correctly--could be a lot of things.

If they did not work well without problems DTR would not be selling them.
Assume hundreds of them have been employed w/o any problems.

All my high power units use a XD or this SXD driver with no issue's..
It just might be a rare fluke..

Hi
The SXD driver that you fried are really great drivers. I used many and love them. Can’t see why that happened Lazeerer makes an awesome driver I started using them years ago and will always use them
Bill Clinton hope that’s not your real name
Only because he and Hillary are crooked as the letter Z
Rich
G

Yeah, I wanted to show what was going on and avoid showing the handy work on the batteries, but that wouldn't have shown everything. I did an awesome job with the diode, the build was going so well... and yes, I totally agree they are typically rock solid units from what I've read. I'm not sure what happened. Just my bad luck I guess. The diode survived. The batteries work fine in everything else. Maybe I better test the voltage to make sure they aren't 300 times over charged. It's just back to the drawing board I suppose.
P.S. Totally not former president Bill Clinton. I couldn't live every day looking at those darn pantsuits... 🤣
E

If you bought it from DTR and it failed not because of an error on your part, and sometimes even it it was customer error, DTR will replace it. No worries .
DTR is a 100% reliable and great guy who stands behind everything he does and sells and provides, generally, whatever help is needed to anyone who asks.
Last edited: Oct 22, 2019

Wow. I have used lazeerer's drivers for years, but don't ever recall anything like this happening to me. As far as I know only DTR still sells these, but I could be mistaken. If you did get it from him I would PM or email him about this.

That is the very specific damage the IC takes from reverse polarity but no worries Augie a message with your order number or email used so he can look it up and well help you get back up and running with a new one. Search for reveres polarity and X-drive as I have posted the pick showing that many times should be easy to find but I will get it off my computer when I get back to the shop. The driver is designed so that it will not damage the diode but the driver will need to be replaced. It is a very common practice to protect their IP by removing the identified marks for specific components.
Augie
https://laserpointerforums.com/members/aug.56878/ Well thank you all for the help, I'm still really confused as to why this happened. I'm absolutely positive it wasnt hooked up backwards, I even made the wiring specifically so it couldn't be wired backwards. I'm baffled. Im definitely not going to use those batteries or any of the original wires. I trust that you know your products, and I will have to assume I made a mistake somewhere. Maybe I should go back to fishing as a hobby. Just frustrating! On a side note here's a photo of a different diode I have running off of a lm317 with the cooling fan removed. Unsure of the output or consumption, just thought it was worth including in all this. Thanks again folks. You all are totally excellent!

No poblem things happen. I actually was just looking at the pic you sent over on ebay and maybe I just cant see as the pics are not that clear but the case pin should be visible on the bottom side or the nub if you had clipped it off so if it is not where the arrow is in this photo but on the other side(assuming it is a M140) then that would be backwards.

Let me know if I am seeing that right or just not getting a clear view.

Another note the diode looks to have had a bad press or there is just an issue with the module as I think I can see the lip of the diode. 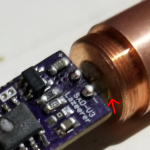 Could just be the module depth is not right, a mispress and either slightly crooked or deformed the edge of the diodes base, some material scraped down the wall the base was being pressed into and not seating fully.

Probably not going to be something to get too worried about just noting what I see on these modules and with a lot of modules going around now I have seen some big difference in quality as well as something that I think is highly contributing to death of the diodes with the integrated lenses that get removed.

I can see the grade of the copper is lower and the machining looks to be poor. The easy ways to spot are the surface is not as smooth which is due to impurities mostly but bad machining also compounds the issue. The density is not consistent which give it that surface and color but the biggest issue is the bits and pieces from the threads. You can see waviness in the threads from bits of the copper falling off which more and more everything you thread a back or lens in meaning debris in the diode pocket. They tend to machining them very loose as lenses can bind easy if tight since they are digging though material as they go. Then you get copper for the thermal abilities which with poor tolerances, that rough surface and the impurities itself can all compromise the ability of it to move heat at all.

Anyway that is my rant for the day.