Here's a little guy that's been forever coming together, It's a 3/4 length mini pen made by Streamlight, it's their "Microstream" model which I believe is their smallest offering.
So finally after two diodes, the first was just a very weak (83mW) w/G-2 lens, and two drivers (operator error), and a lot of just plain collecting dust, it's finally complete. :yh:

These little Microstream builds have been done a couple of times previously, namely by ShotGunDrums, and CynicalBrad.
My Microstream was on order back when SGD posted his build back in august; this will give you an idea on how long it's taken me to finish this up!

These Streamlight penlights make a great host for pen sized laser builds, they're a high quality host with a decent quality momentary/constant on tail switch.
The only thing that I don't like about them is the fact that the front does not disassemble; you have to pull the original led/driver assy. out from the front, and your new diode/driver module goes back in the same way.
Many pen sized lights are built this way, but a 3 piece host constructiom would be easier to work with. 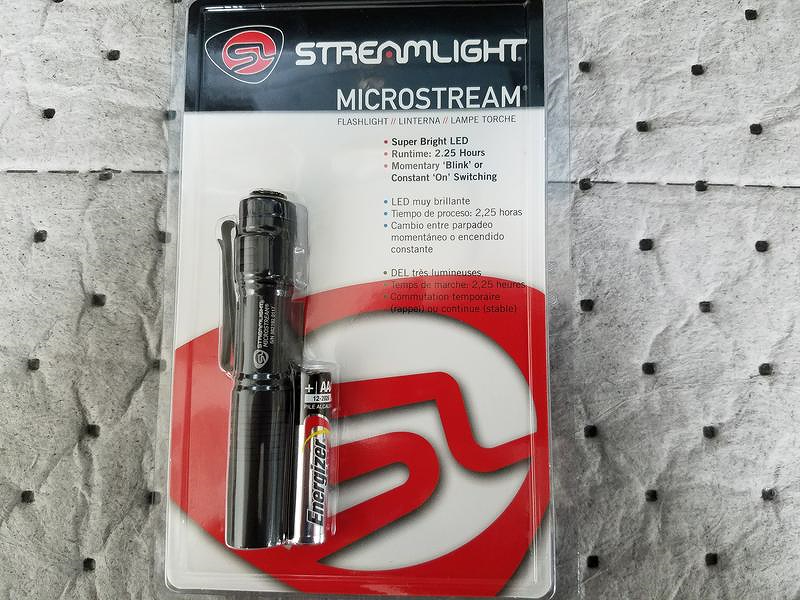 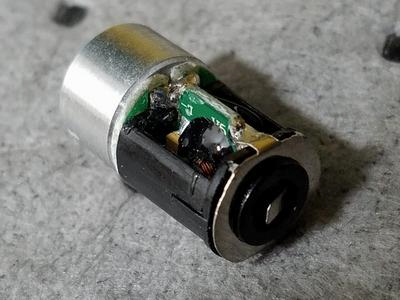 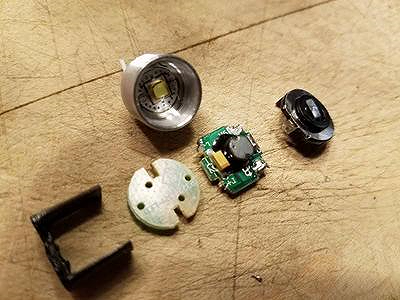 Module assy. showing bored out aluminum back half, and turned down copper front piece. 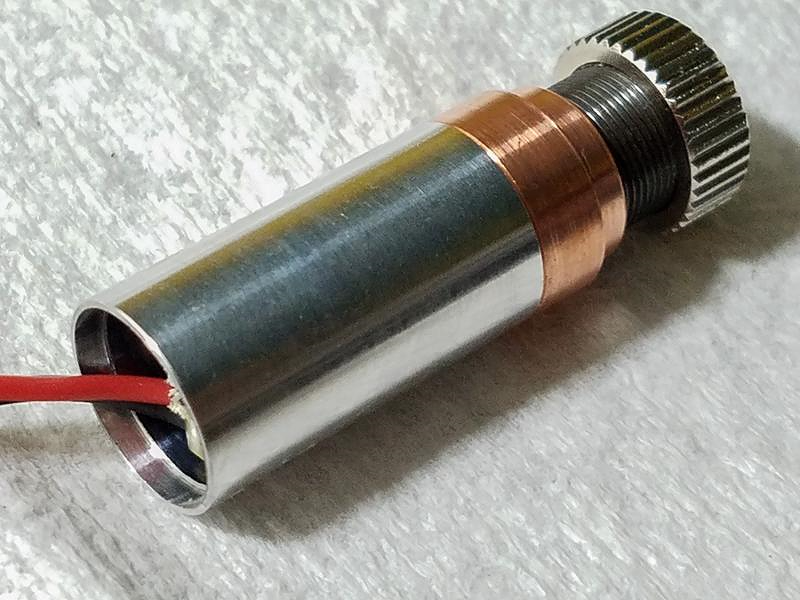 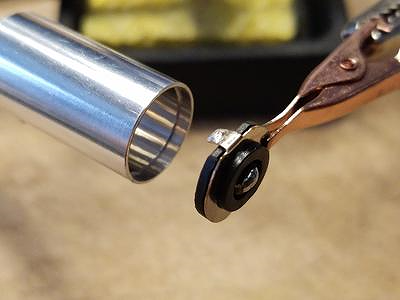 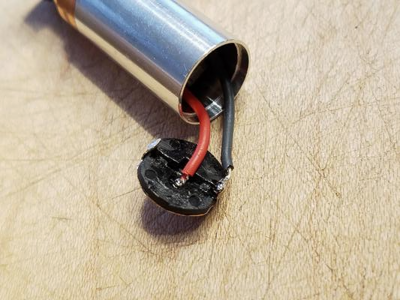 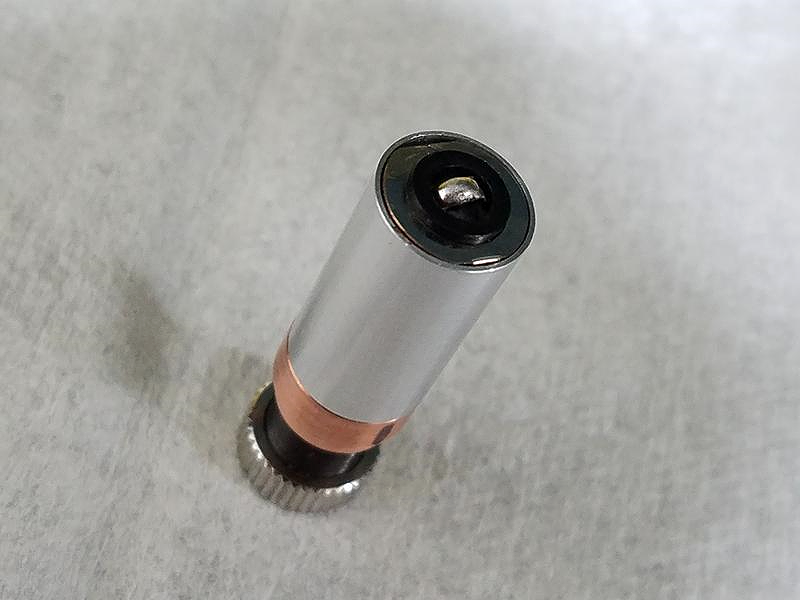 (Left) Modified 12mm copper module. (Right) 2 styles of module retaining clips that I tried. I ended up using the simple home made spring clip on the left. 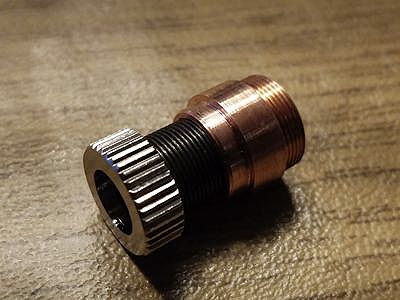 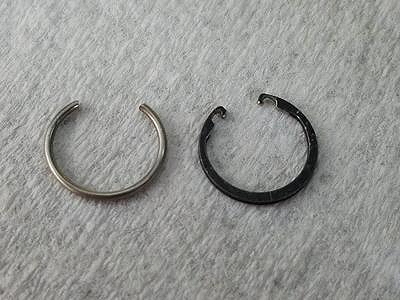 Finished EDC pen with focus knob assortment. I ended up using the standard fluted one which I sandblasted and painted a flat black to match the look of the Streamlight.
The others are the standard chrome plated, a 'Survival Laser' black anodized aluminum knob, and a custom one that I made which looked real nice, but I decided on the all black look. :yh: 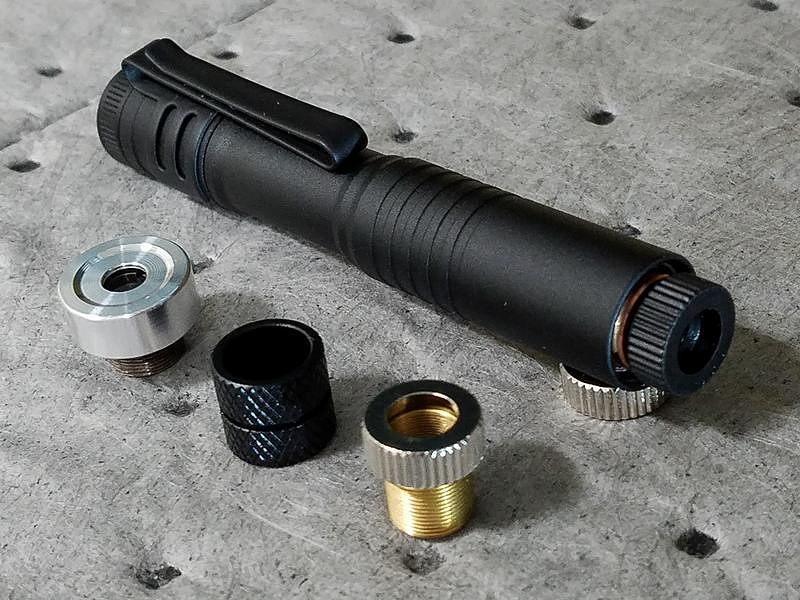 Here's a look at it with the custom adapter ....not too shabby! 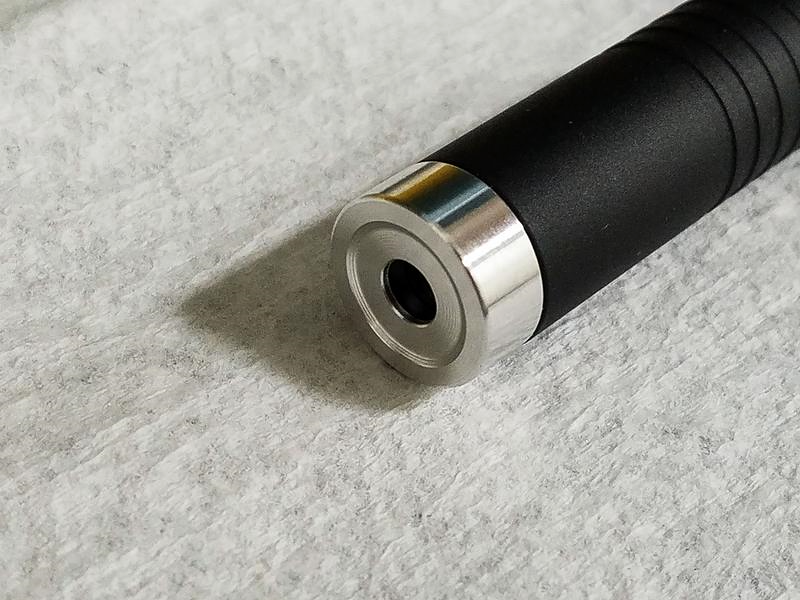 Here's a couple of pics showing how small this pen is. 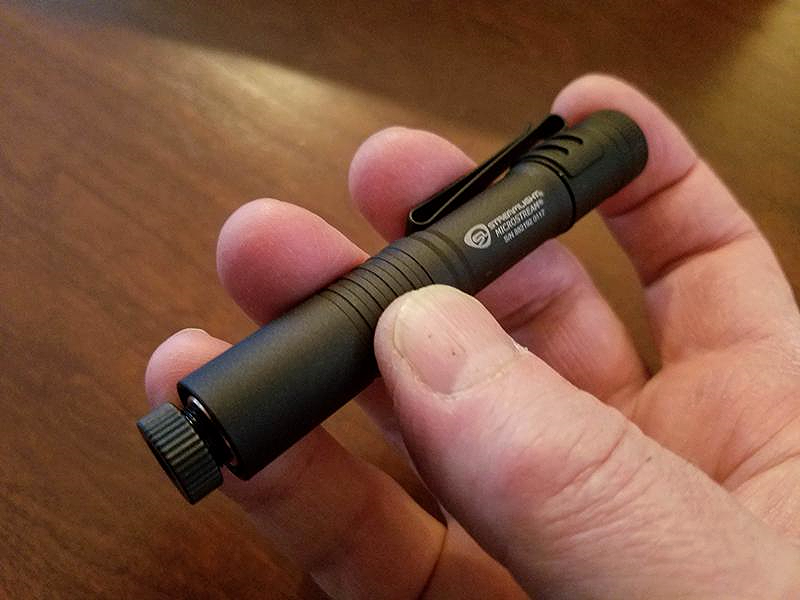 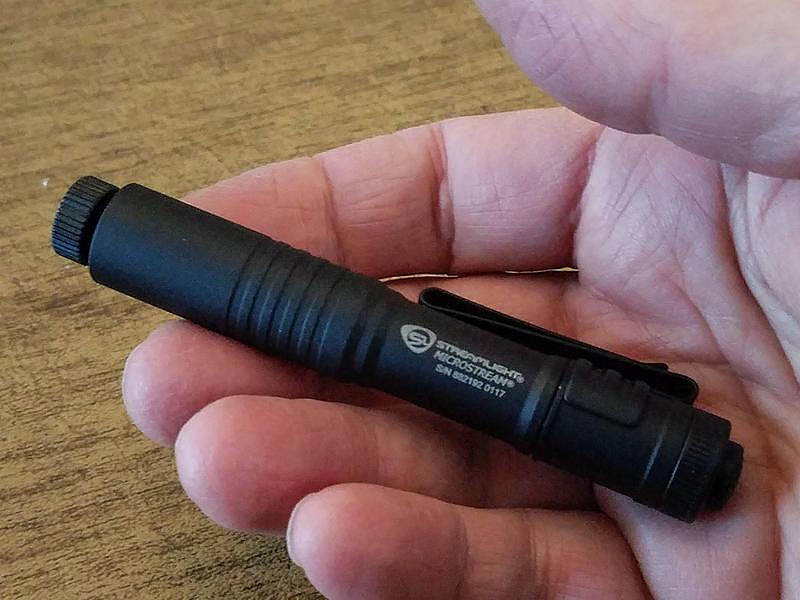 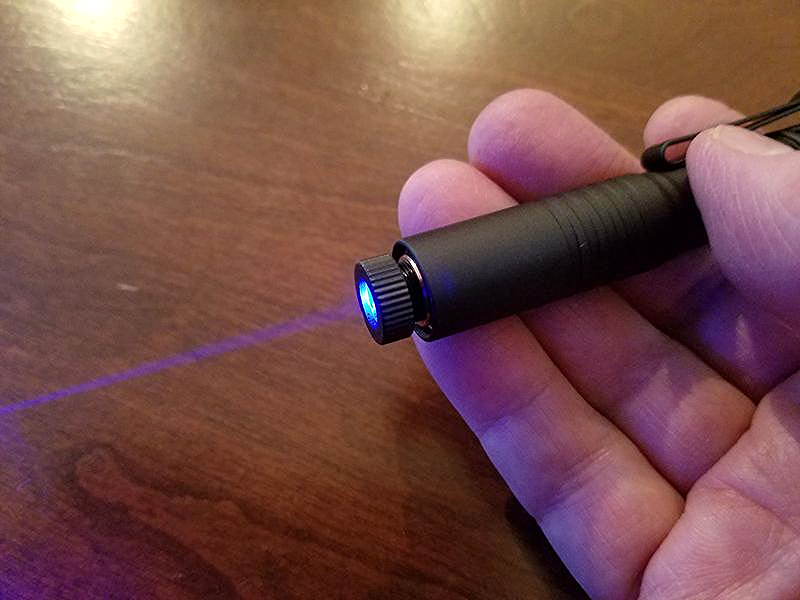 A few indoor beam shots with some light fog. 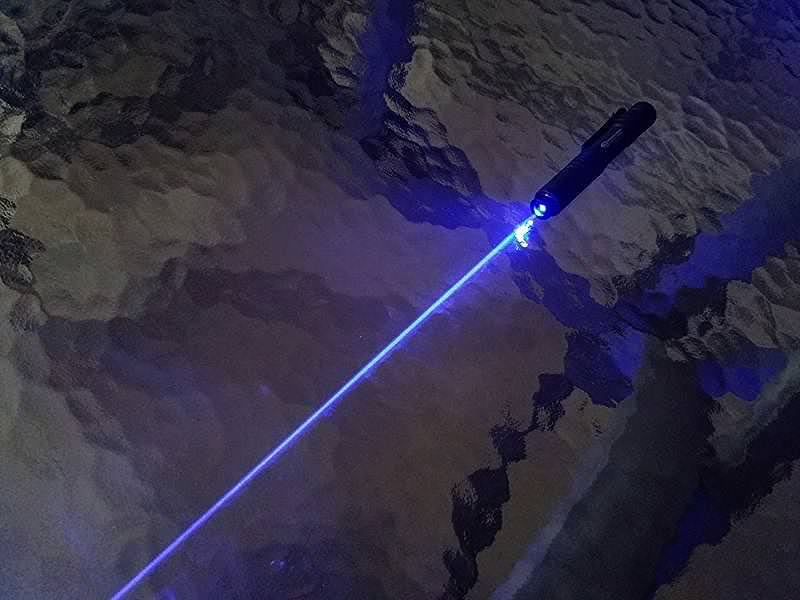 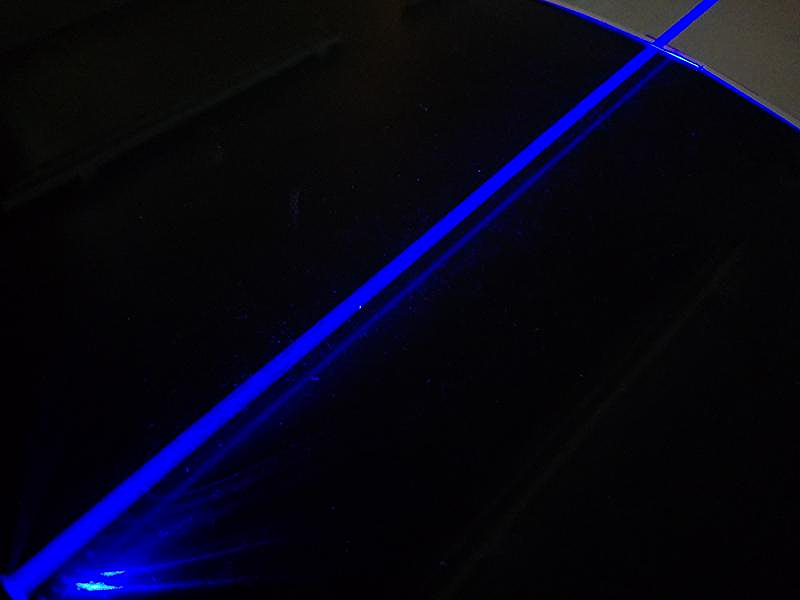 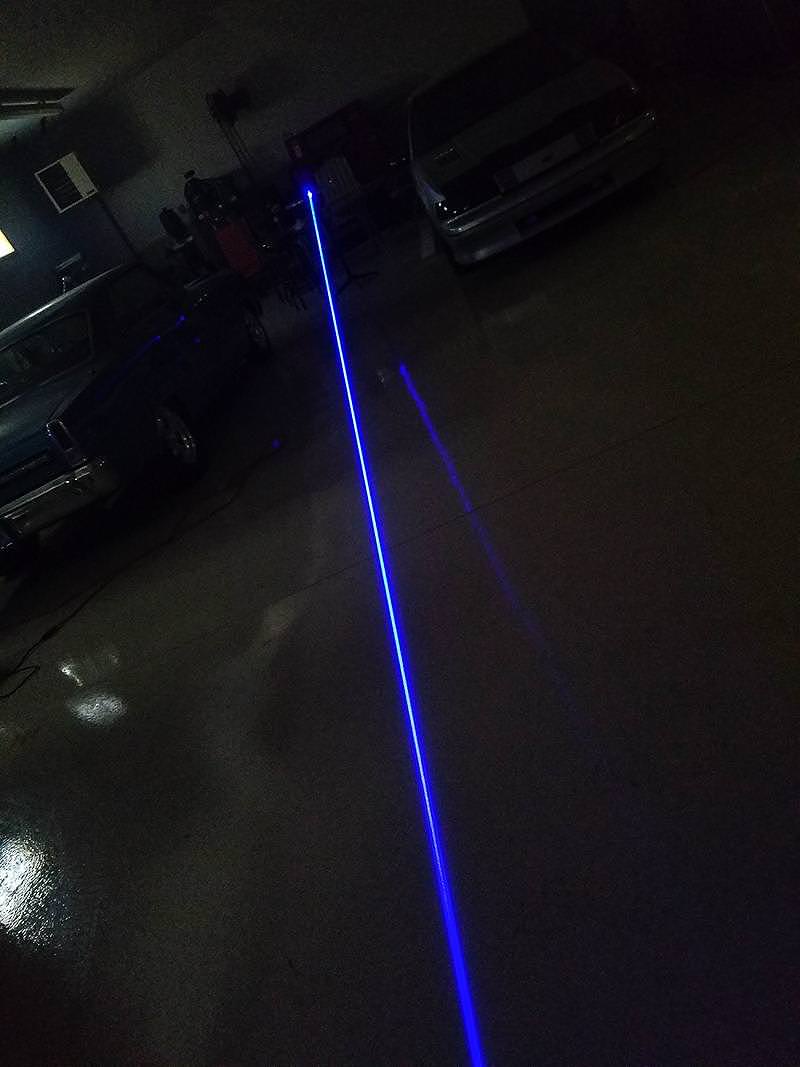 Close-up of dot on textured garage door at 40'. 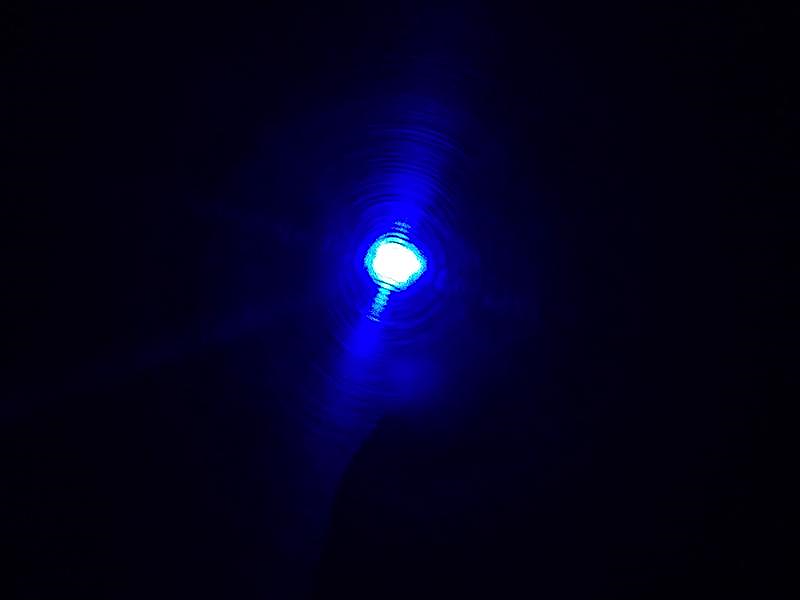 A pattern made on the wall when the laser was shined through a wavy glass table top.
Or, .....this could be your laser on drugs! 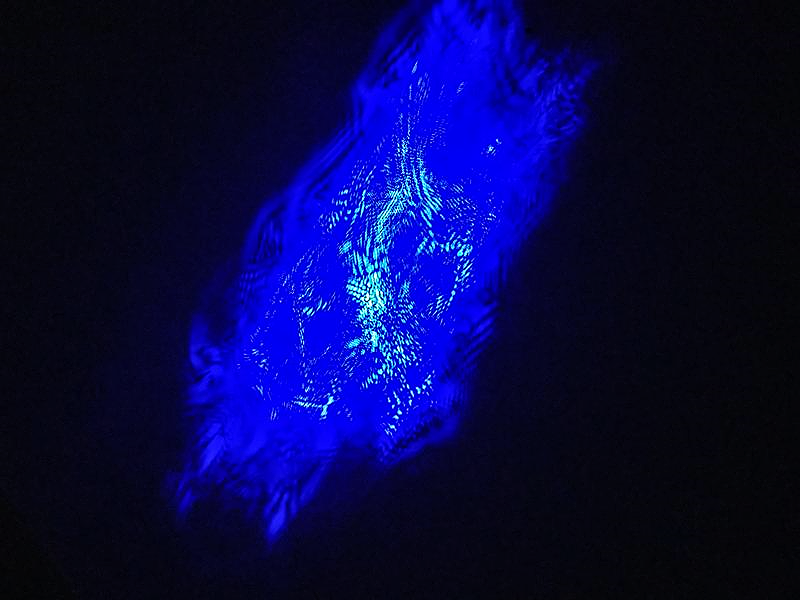 That's all for now folks. :wave:

PS - I would recommend this penlight to use for a host for a low to mid powered laser. Being shorter than a "traditional" pen it clips in any pocket with ease, a truly EDC (every day carry) design! :beer:


EDIT: If anyones device is showing my photos as really large or all different sizes, please let me know, as I have two devices (phone and tablet) that show these pics as being fine, but my laptop shows some of them as extra large and others as correct?

Man, I enjoy of your build threads and pictures!!

(Tried to rep you but that communist is back in charge. :crackup
Last edited: Mar 22, 2018

BobMc said:
(Tried to rep you but that communist is back in charge. :crackup
Click to expand...

Jeff, it sure has been a long time coming. I’ve been wondering when you’d get to this one. Nice clean work man!! I like how you modded the module and backshell. Very nice and excellent diode choice.
Thx too for the shout!!

PS here’s a knurled FA Rich gave me included with my first HS purchase from him. What an really nice guy he is.

Another great build and great documentation showing it. In the one pic showing your cars in the garage, is that a 1960 something (64-65?) Nova on the left?

Thanks AD, Bob, thanhtung, I appreciate your comments! :beer:

@SGD, I know you've been wondering when I'd finally get around to this. You just reminded me to add links to yours and CynicalBrads mentions, so I just did, now people can access them without a search.
As it turned out, I really didn't need to mod the back half, because I ended up using a short S-mini driver in place of the originally planned and longer nano which I damaged.

That brass focus adapter is beautiful, looks real good on that pen!
E

Glad it turned out so well :gj: :beer:
G

brucemir said:
Another great build and great documentation showing it. In the one pic showing your cars in the garage, is that a 1960 something (64-65?) Nova on the left?
Click to expand...

@Encaap and Gazen, really appreciate the kind words, I like this host also, it's something a little different that you don't see everyday.

Hi BT,
Now thats a pen great job I like those smaller builds with the right WL good choice buddy. Do another one this one came out awesome..

Hi BT, Send me a measurement OD and ill machine one for you, What material do you prefer??

Beautiful build and great review, BTG! I owe you a +Rep, as I’m currently unable to do it. Thanks again and Take Care.