RedCowboy said:
It says it right there, photorefractive beam coupling, let's look it up, it's not a concave cyl, that will expand the beam.
It's possibly a bragg grate combiner.
Click to expand...

I know what it says. That's why I included it in the picture snip. That phrase, however, means nothing to me nor do the very sparse search results for it.

Obviously the concave lens will expand the beams, but that can be corrected. The point of my post was whether a concave lens could be used to parallelize multiple beams. In fact, the the more global point of my post was whether any lens or refractive device could be used to parallelize/combine beams. You have not answered that.

Further, regardless of what photorefractive beam coupling means and regardless of whether it involves a concave lens, it uses some form of refraction to combine them. That's what I'm pursuing.

It's possible, but the main issue here is that you need a very large lens compared to the incoming beams if you want to treat the beams as simple rays for purposes of collimation. At that point, you might as well be using a set of mirrors, or a bunch of prisms (such as in a fresnel lens).
L

Somewhere in Youtube comments to some Death Star project I read suggestions to put a (small) biconcave lens in the Death Star focal pont in order to get combined beam at output like in the movie.
The problem, however, I think is that if the lens is big compared to beams diameter, then in the center of the lens its walls are almost parallel, so the beams would follow each its route as if there would be no lens at all. But this is just theory, maybe in real life it is not like that.

Other option I thought of would be doing circular Knife Edging with an axicon, but also here round beams would give better results than ones from multimode LDs...

Maybe if this could work, then someone would have done it already?

The problems is the distance between the emitters. Even with the diodes close together the emitters are very far apart(relative to the width of the emitters). You will always end up separate beams after the focusing lens. Knife edging effectively put the emitters next to each other. And if you can live with small gaps between the beams at exit you can make the beams overlap at a distance.

I think he means the edges overlapping the right amount, not complete overlap, and yes, because of the divergence.
E

RedCowboy said:
It says it right there, photorefractive beam coupling, let's look it up, it's not a concave cyl, that will expand the beam.
It's possibly a bragg grate combiner.
Click to expand...

Sorry for necroing, but I think this is valuable information about knife-edging and beam combining with Single Mode emitters..

PDF Download >>
Link for patent >>
Man behind of this patent >> 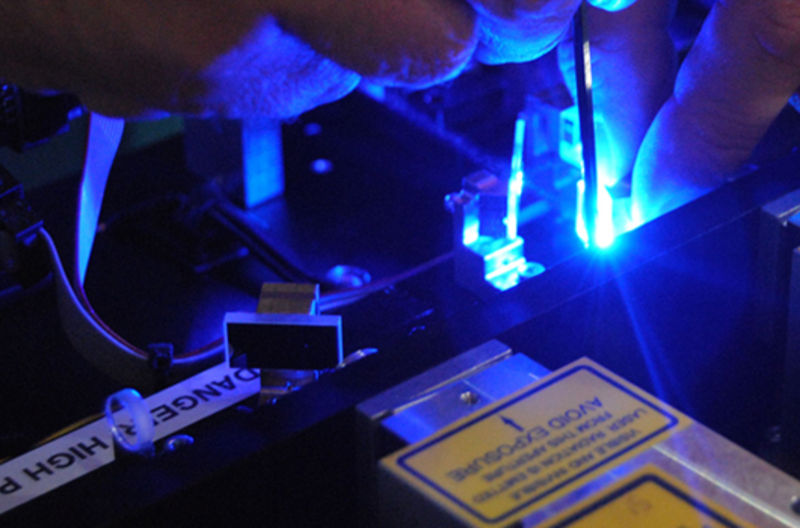