How healthy are your batteries? (How to measure internal resistance)

The resistance of quality new 18650 cells,

should be much lower than what you read.

Make sure the wire leads are heavy enough to carry the current,

without adding to the resistance readings.

The resistance of quality new 18650 cells,

should be much lower than what you read.

Make sure the wire leads are heavy enough to carry the current,

without adding to the resistance readings.

Sorry for the late reply, I tested the total resistance from the battery holder through the wires and everything so the added resistance of the wires didn't matter. I have used these wires with more than 2.5A of current before and they are still OK. Any suggestions? Thanks!

Sorry for the late reply, I tested the total resistance from the battery holder through the wires and everything so the added resistance of the wires didn't matter. I have used these wires with more than 2.5A of current before and they are still OK. Any suggestions? Thanks!
Click to expand...

and check the voltage directly at the cell terminals,

before and after applying the load.

Ok, here is the results after measuring at the terminals and with better wire:

You are too far up on the discharge curve. Try using voltages closer to where the curve levels off. It appears that the idea is to find derivative of curve where it is least curvy? Or, the slope of the discharge graph where it is in the middle of discharge? It's more linear at lower currents, but there is still a pretty common slope that is independent of discharge rate.

Internal impedance of a battery < here's a good read, I was just going to hkj's site for an example discharge curve.

This image was used to illustrate something else, but does show the effect of where you measure your voltage values on what your final calculated Ri value is: 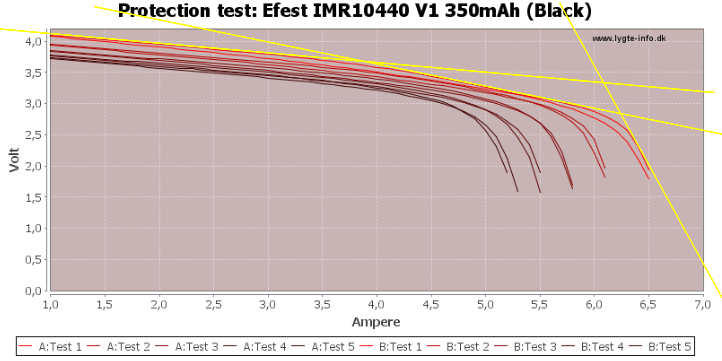 All three lines are results of different measurement pairs on the same cell at the same discharge rate, and are greatly different. You see, though, that one line fits better than the others.

You also see that for the other discharge rates, you will get different Ri values as well.

I'm a bit confused about what resistor I should use to test my battery. I want to test the battery in my cellphone because I suspect its gone bad. The battery is 3.6 Volt 1750 mAh capacity. Could someone explain how to determine a safe resistor to use as a test load?

This is very useful information.

Many years ago, I was wondering why one set of my batteries had normal voltage but gave poor performance when I put them in a laser. I think this thread explains everything!
D

is using 10ohm, 1/4w resistor will give the same results?
I know that I can burn the resistor, but I only care about the results.

do I have to use 5w resistor? or 1/4w will give the same result?

It will dissipate about 4 watts,

so you will need at least a couple of 1 watt 10 ohm for a short test time of about 10 seconds.

I am not sure that I understood correctly.

And for Protected Cells we should add 50mOhm to above benchmark?

alx said:
I am not sure that I understood correctly.

And for Protected Cells we should add 50mOhm to above benchmark?
Click to expand...

From the resistance of the protection circuits in the cells I have seen . . .

that would add ~50 milliohms to the numbers above.

I can get a pair of alkaline cells (also safe for landfills) for 25 cents when purchased in bulk, and I don't have to soak those in water first. Why would something with half the capacity be worth ten times the price?

I use my new Opus XT-C3400 V2.2 for testing now. Love this charger alongside my Nitecore ones. Pretty much just use the Opus for testing purposes as I have so many Nitecores and they can charge other types of cells the Opus can't. Wish the Opus would tell you where you are at in the Discharge Refresh mode though so you would know about how much longer it is going to take. I know it costs more than other chargers but in my opinion it is well worth it. Just make sure you are going to get the V2.2 that came out not too long ago
Hopefully we are bumping for good enough reasons...

Analyzing Chargers do give you more information about your cells.

I use my Analyzer to give internal resistance levels for many different age cells.

While I am sure all posters and the OP mean well... this thread IMHO needs a more complete and very easy steps for all users.

... Like others I harvest my 18650s from laptop battpacks.. I sure do not want a fire. While I do own an OPUS many here do not have very high end chargers.. and.. rereading most of this thread did not really make me feel that I was completely understanding everything. I am inviting some members to add to this thread , which, makes to me better sense than starting a new one. Thus it is not falling under my understanding of necro posts.. still quite important.... etc.