Where to Buy G9 Lens

I made a couple videos showing a DTR G2 and a Sanwu G2 both used on the same laser to cut large popsicle sticks, they both cut through with such a tight needle thin beam that they cut without imparting energy into the material adjacent to the cut and they both cut well. Unfocused a little the sticks would ignite with a POP sound.

But the raw output of a diode such as the 44 is so aggressive it clips on the 12mm copper modules threads without a lens installed, so when using corrective optics such as C lens pairs or prism pairs you want to get as close to the emitter as possible.

The DTR G2 has a rear focal length of 2.39mm and the Sanwu G2 is less, I don't know how much but it's enough that after 6X cyl correction with the G2's as the primary lens, the corrected beam that gets expanded by the sanwu 3XBE gets over expanded by the BE's imput lens when the DTR G2 is used but it makes a useable print when the sanwu G2 is used, it's a real science how one lens in a train effects the next and the next.

Now for cnc cutting the Chinese G2 had a problem where the shoulders would hit the 9mm diode can before it got close enough to focus up close, but it countersunk on the 5.6 and worked on it, but the Sanwu and DTR G2's don't have that problem and both work fine for cutting.

Hi Hoo7H,
Your lenses ship in the morning will send you tracking also.. Enjoy my pleasure and there is a bonus in the package ..

I am also looking for the g9 lens, thanks for your information
G

RedC, as usual your a wealth of info and I can imaging the time to set these lenses up and to upload all the pic's and info:beer::beer: I'm so full from being spoon fed and I can't eat another bite
Weren't there issue's of these G9's cracking like I mentioned on my other post?? and some had different 3 or 4 leg pedestal's?
Last edited: Mar 9, 2018

You got me on that GSS, I'm not sure, but lenses can fail, a lot of newer projectors have an airtight seal around the light engine to keep dust and humidity/moisture out, the heat dissipation is accomplished via heat pipe to remote radiators with fan forced air, this reduces lens fouling and cracking.
G

Sorry, I should of said it better..
I meant cracking or chipping by trying to remove the lens.

Yes I can be an issue if you are not careful. I probably removed 30 or 40 lenses and broke two; one fell on the floor and chipped :tinfoil: and the other got scratched. Lazeerer did a good video on removing them, Ill find it and post back.:beer:

Edit: Here you go link to the thread and video below

Hi
If you snip off 1 or 2 of the prong sets holding the lens in they come out easy. Use a small pair of wire snips . There’s one lens in the package I sent that is still intact with the lens setting.

I have always removed the diode from the lens holder, then cut the holder with a pair of dikes and removed the lens. I then soak them overnight in 99% isopropanol to soften the remaining glue on the lens. It can be scraped away after that using a piece of plastic. This procedure has worked for me many times.
Last edited: Mar 9, 2018

I remove the lens with holder by twisting it, just 2 pair of pliers then squeeze the tails of the holder that were on the diode and the lens falls out.

Really easy once you do a couple.

Then with a razor knife I carefully remove all the glue, make sure not to get any on the diode window and remove the glue from the lens edges so it seats in the threaded barrel. The glue is dried hard so be patient and cut it away in several bites.
Last edited: Mar 9, 2018

Hi Red,
Thats the same way i dislodge the lens to very fast and easy, 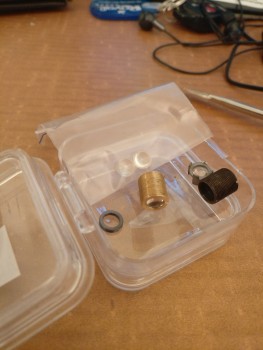 Rich I don't know what to say man. Thank you!

Hi,
No problem my pleasure enjoy them..

Rich I don't know what to say man. Thank you!
Click to expand...

Aren't these gel lens holders great. Lifetime sent me one too.....
So what are the other goodies that you got?


GSS said:
Aren't these gel lens holders great. Lifetime sent me one too.....
So what are the other goodies that you got?
Click to expand...

The pic that woo7h posted is a plastic case with about half of it filled with a gel like substance.
It's a solid flexable surface on top though as to not get any goo on the optics. Could be there is no gel inside though and it's the same through out. Its great to hold the lenses and cushion them. I'm not sure if they were made specific for lenses.
You must log in or register to reply here.
Share:
Facebook Twitter Reddit Pinterest Tumblr WhatsApp Email Link