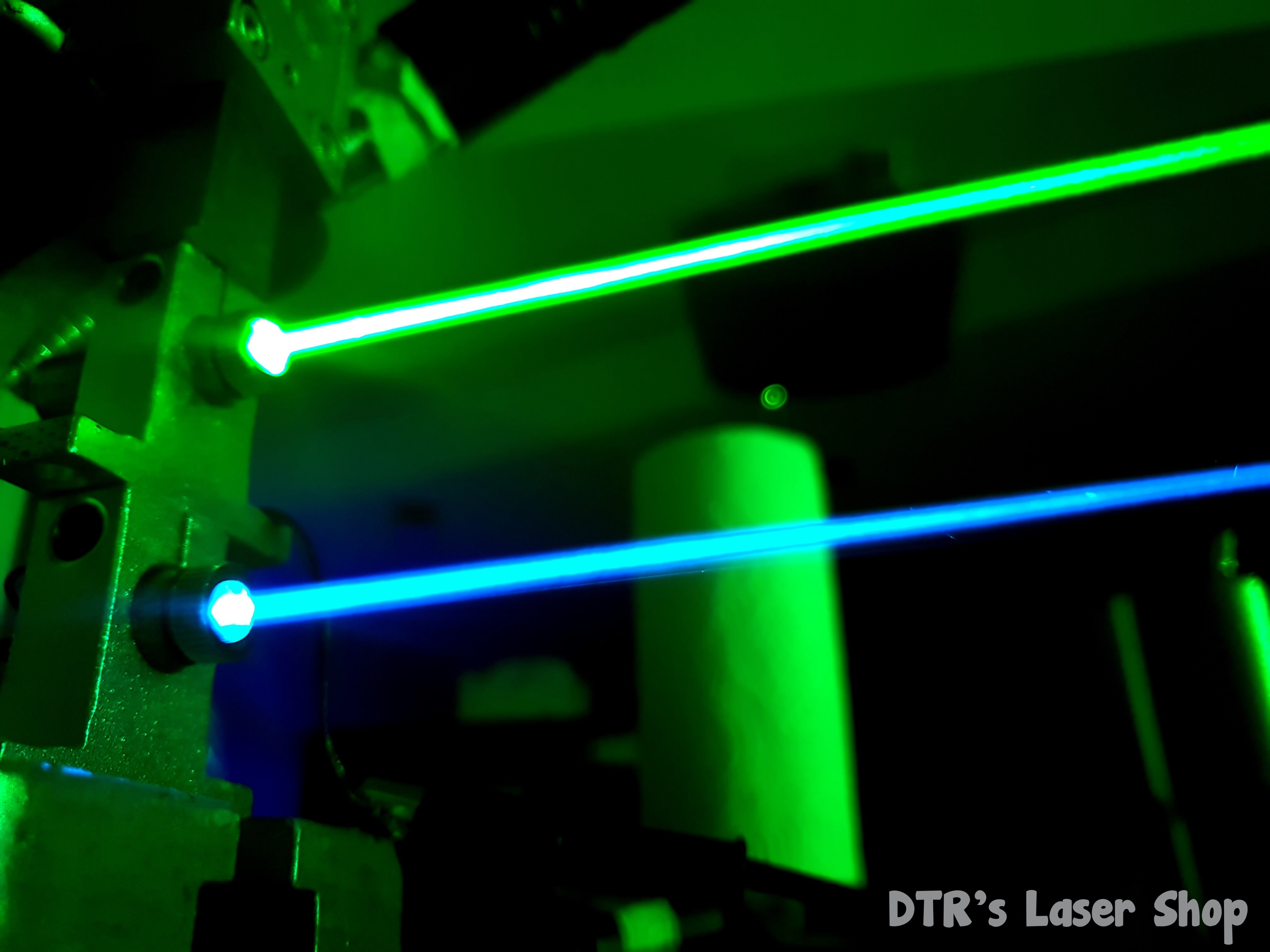 """EDIT""" They are Sharp of course as there is an invasion of sharp lower quality diodes being sold as similar rated Osram diodes.
So I get a few of new diodes here that was falsely being sold as PL520B. I have been testing which does not come with the info on the manufacturer part number. Usually I determine the manufacture pretty easy via the characteristics in markings and construction that are unique to each but these are marked and have no defining characteristics I am familiar with. I am betting they are Sharp based on expectation of the recently listed as new product 80mW, 95mW and 135mW 3.8mm 520nm diodes listed in their catalog. Will edit the testing thread title with the correct diode when/if we figure it out. If not Like some other diodes in the past will give a designation.

This is an interesting diode. 3.8mm, 520nmish as looks identical to the PL520B and would guess is rated 80mW. maybe up to 135mW based on testing and would land in the range of those new sharp diodes. It is more efficient than the PL520 due to the forward voltage continues to get lower as these get more refined.(see the efficiency chart) but downside is the Oclaro has a much cleaner output as this does have the ghost box dye reflection that is on so many diodes with the DTR-G-2 or other G-2's(which just means random high pass, short focal length, single element aspheric lens). The units has markings I have not found on any diode before. Point of note. They all have pins that are about 2/3 as long as any 3.8mm diode I have seen. I considered they were pulls and someone clipped the pins down but looking close at them under the microscope they are very clean not what you would expect to see if someone had gone after them with clippers as they are really soft and usually. All legs on all the diodes I have seem to be the same length which I was looking at to see if there was variation from diode to diode as they should be all the same. So it is possible but they really worked to make them look correct. I have seen 3.8mm ones with longer pins just not shorter so will keep that in mind as a possibility. So as well as the three row of four digits makings I think there is writing on the top of the substrate that the dye is mounted on.

Here is the diode next to an Osram and a USHIO diode.
Nest is the two row binning code that you will see on all Osram 5.6mm diodes and on some sharp 5.6mm when it is not printed on the top of the can. Then a picture of the diodes that were N!ch!a and sold as NDG4216's. I have not seen any didoes from them that did not have that. ​
New listings for diodes with similar markings have popped up just about everywhere as different diodes. The new listings for example have quite a few variations of just "(Insert Their Business Name as Manufacturer) 520nm or 525nm diode with powers listed from 50mW/80mW/95mW/100mW/120mW/135mW. Some are "New import 100mW 525nm/520nm" and the older 100mW NDG4216 515nm. I found quite a few previously-existing listings that have swapped out the picture of PL515, PL520 and PL520B. Only reason for that is deception and the looking at the image of those 3.8mm Osram diodes while waiting for the diode to arrive and then the round base diode arrives that this diode has will be a big red flag the moment you see it. I am hoping and putting my best guess that this point it is one of the new Sharp 520nm 3.8mm diodes. GH0521DE5G, GH05290A5G, GH05280E5K, also as and more. Here is how it stacks up efficiency wise with the other 3.8mm 520nm single mode diodes. Can you measure wavelength?

I was wondering if the WL of these is actually 520nm too. Thanks for the test results.

Jordan, if you can't, high time you invest in the needed equipment to do so.

Hey I recognize the supplier logo on the one cropped image. Knowing them and the lineup, my bet is sharp too.... I'm convinced they dumpster dove for some of their oddball diodes.

Moreso on what we see here... Box reflection is less of a giveaway but they (sharp) are more prone to the box reflection than osram. Not many companies have the tech to make green diodes and sharp is pushing in on that market. Especially with that efficiency. Plus they are the only ones I can think of to write on the can like that...

Tested the DTR-G-8 and it does not completely get rid of it but it is so faint you have know you are looking for it compared to the DTR-G-2 where you have to look for the dot as the box is 3x larger and very bright with this green diode. So I would put this in the win column for the DTR-G-8. Got to mount another one as I ripped the lead out while setting up for pictures.

I will also test the DTR-G-3 and the DTR-2E-G to see how those do with it. Had to mount a new one as the lead shorted when running on my older power supply popping it while trying to adjust the beams for pics.. Lost the one I powerer tested in the last pic on the power test @ 575mA. Been so used to the kill test just getting to the point lasting stops on the newer generations diodes but not killing them unless that condition persists and not turned right back down.


Alaskan said:
Jordan, if you can't, high time you invest in the needed equipment to do so.
Click to expand...

Need suggestions as I am ready to get one just need to get a little time to do some research. Any advice from those that have them that could point me in the right direction I would appreciate.


ZRaffleticket said:
Hey I recognize the supplier logo on the one cropped image. Knowing them and the lineup, my bet is sharp too.... I'm convinced they dumpster dove for some of their oddball diodes.

Moreso on what we see here... Box reflection is less of a giveaway but they (sharp) are more prone to the box reflection than osram. Not many companies have the tech to make green diodes and sharp is pushing in on that market. Especially with that efficiency. Plus they are the only ones I can think of to write on the can like that...
Click to expand...

I did some good eyeballing and these and the PL520B are right on as far as my eyes can distinguish. I know that is not exactly scientific but should be say around a few nm. I would think If I really compare I would get a hint of 5nm difference.

Yea been the invasion of the sharp diodes. N!ch!a has cross licensing deals with quite a few other manufacturers and seem that they have been aligned to focus on different segments of the industry and not step on each other toes. Osram seems much better quality but sharp has quantity and variety. They have given up some great wavelengths but I do believe the ones filtering down to us are trash bins. I think of Sharp like the GEO division of General Motors that was to counter and cator to the low grade cheap cars coming in from overseas. They probably have the lowest manufacturing cost and seem last to the party. Osram does have distinctly different dies as you sharp and nichia have a dye reflection that is square and the higher power Ingan Osram diodes are less pronounced and shaped like an upside down pyramid.. The PLT5 450B everyone is offering is the actually the lower grade 80mW sharp version. They will do anything to cheat you out of a buck. They have the J in the spot shown.

I have been catalog as much info as possible on the markings and only when I can confirm them to be connected. That datasheet snippet is directly off the sharp-world server as I can find edits on almost every one I have evers seen from any other source.
Last edited: Jun 27, 2019
You must log in or register to reply here.
Share:
Facebook Twitter Reddit Pinterest Tumblr WhatsApp Email Link