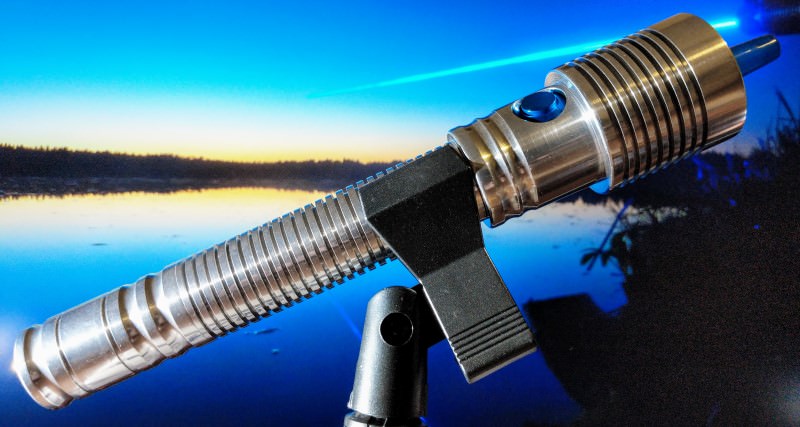 This bad boy (pun intended) is a 455nm NUBM08 custom build made by badboybilly.

It's a glorious piece of art with perfect tolerances,
a 2-element AR coated lens, a SuperXD set to 4.5A
and a de-gballed Nichia NUBM08 diode pumping in at around 5.75 Watts.
(Ophir wasnt taken, waiting on a heavy thermopile to get actual reading, will edit later).

The head is nice and large with no set pin, so perfect thermals
and long duty cycles for igniting magnesium behind glass for instance,
there are many crazy applications for chemists and physicists alike!

It takes 2x 18650 in series.
My 3450mAh Panasonic GA Button tops worked a treat.
I have a constant current charger called the Lii-500
which is superior to Xtar and Opus PWM I feel, so the driver should enjoy healthy long lasting batteries.

It felt like yesterday when 100mw Bluray's were the only blues around,
now we have diodes that are getting closer and closer to Star Trek Phasers.

Google pixel phone <3
Who needs 2 cameras when 1 does everything better.

Thanks for the review bro, I’ll add that burning vid for all, Cool man enjoy!

Good looking unit, and having 2 switches is the best way for added safety.
Last edited: May 30, 2018
G

Great job, both you and badboybilly.

Looks very sturdy with plenty of metal to absorb heat. Badboybilly has made quite a few nice looking hosts so far. This looks able to handle as much as the high power NUBM can dump into it. Enjoy!

That host really looks good - both aesthetically as from a thermal design standpoint.

Is it capable of continuous operation? At least from full batteries until they cut off?

Benm said:
That host really looks good - both aesthetically as from a thermal design standpoint.

Is it capable of continuous operation? At least from full batteries until they cut off?
Click to expand...

I did some testing when the NUBM44 first came out and with Panasonic 18650 cells I found running 2 in series would work but they did sag pretty hard and as they discharged would end up falling below minimum the VIN of the SXD requiring more frequent recharging so I also tested 4 x Panasonic 18650 cells in series parallel and that held up a lot better, now I use 3 x 26650 cells in series for my NUBM builds as I can run longer and many more cycles before recharging, I was running at 5 amps in the testing.

2 x 18650 cells of good quality preferably IMR/INR formulation will work for driving NUBM's @ 4.5a but if you plan to lase for longer duty cycles and often you will have to recharge a lot more often than if you run 3 cells. Going up to IMR 26650's will buy some time, I have some testing with them somewhere, the sag was from 8.2v to 8.0v with 2 x E-Fest 26650 IMR's in the 1st 5 seconds but they held at 8.0 and slowly discharged.

My test cells were Panasonic NCR18650B cells, the newest IMR cells could perform a bit better, they will work, just need to recharge more often.

Congrats on your new acquisition. It looks like a good build and I'm glad you are happy with it.

Looks very nice! Congrats, and kudos to BadBoyBilly on the host work!!

RedCowboy said:
My test cells were Panasonic NCR18650B cells, the newest IMR cells could perform a bit better, they will work, just need to recharge more often.
Click to expand...