Yes, that was a comment made to Curtis as his trying to show how these colors look didn't come close. I also enjoy the beam shots, but that wasn't my point. :/

To me I if I am looking at it up closer I see more of the blue color but when it is viewed off a distant wall I see a bit more green. The picture of the dots is the best representation of the color that I have seen posted yet. With smoke I do get a closer color representation than the pics I put up earlier but still a little more green in person like the dots. 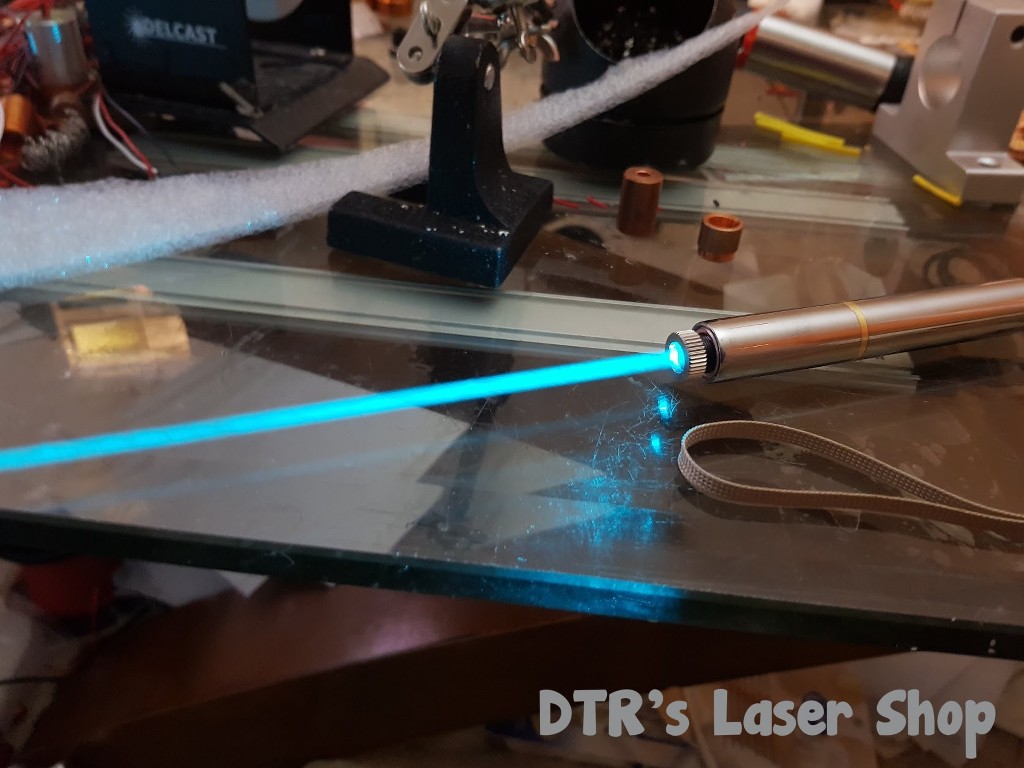 I've noticed that it really depends a lot on the wavelength of the diode. These run anywhere from 486.8nm up to 493nm. I have a build with a 493nm diode it it and it looks very much on the edge between blue and green. I also have one that is 487nm and it doesn't look green at all. It is a very light blue color that could be described as a sky blue. It is interesting at these wavelengths how 6nm can make such a difference.
Last edited: Apr 13, 2018

I don't know exactly what wavelength mine is, but it's a real chameleon as it's perceived color changes depending on it's surroundings.

On my wall it is sky blue, but in my yard it has that aquamarine color with a noticeable green tint mixed with the blue that's really neat, I would like to have one in the 1/4 to 1/2 watt range but keeping the good divergence.

I always thought 500nm would be a really cool color, but it's 490 that's right on the blue/green line or so it seems.

I just got my press today. Gonna stick one of these I got from stryo in a cfmod vape "pen". Hopefully it goes well. This color looks great.
Ill try to take pics with it next to one of the older 495 that was (before?) this batch.
Last edited: Apr 13, 2018

I have both as well. I can tell the difference without having the two side by side. It really depends on the wavelength of the diode.

Edit: I want to give DTR a shout out as I ordered some modules from him but they never got scanned in at the post office. I emailed him and long story short, he shipped them again and I have tracking on them now. Expecting them on Monday. :wave:
Last edited: Apr 13, 2018
D

I am so fed up with usps. Their site says delivered but it’s not in the mailbox. Mad af right now with them. Gah!

dden4012 said:
I am so fed up with usps. Their site says delivered but it’s not in the mailbox. Mad af right now with them. Gah!
Click to expand...

This happens to me every so often and I always call the post office with the tracking number to tell them it has been misdelivered. You need to get on top of this as time is of the essence. You need the carrier to go back and find your package and redeliver it correctly.
D

paul1598419 said:
This happens to me every so often and I always call the post office with the tracking number to tell them it has been misdelivered. You need to get on top of this as time is of the essence. You need the carrier to go back and find your package and redeliver it correctly.
Click to expand...

Dreading that hold music for 45+minutes. Do you think going to the delivery hub would be any better than dealing with a phone rep?

What is your zip code? Find the local number for that zip code and call them. This is where the carrier for your packages works and you need to talk to his or her supervisor and tell them that tracking number xxxxxx has been misdelivered to the wrong address and you would like them to send the carrier out to retrive your package and redeliver it to you.

I get wrong mail all the time and I have had mine delivered wrong, usually it's a house with the same address the next neighborhood over so we just carry each others mail over same day, but today I got one meant for the street over and it's not even a doppelganger of my house number.

I'll just stick a note on it and put it in my mailbox with the flag up, I want them to see that they screwed up.

That works great for honest people like yourself, but I have packages coming in all the time worth $600.00 or more and I can't wait around to see if some nice person got my package and sent it back. This always happens to me when I get a replacement carrier that doesn't know the area. They lost a package once by misdelivering it several blocks over and a week later, after the supervisor claimed it was delivered to my house and there was nothing more they were going to do about it, it turned up over at that house and they brought it over to me.

My point is, the postal service will not help you if you are not on top of this and will claim that it was stolen out of your mail box even when you saw the carrier leave and went immediately to retrieve your package.

I agree, stay on top of it and if it was ( out for delivery ) then ( delivered ) and you don't have it, get on the phone, I know exactly which post office to call.

p.s. The last time I called was a few months ago, I saw ( delivered ) and my doppelganger address the next neighborhood over said he didn't have any mail that day, it was on a day when we had an ice storm coming, so the mailman had returned to the post office early and updated everything as delivered, so I called and the lady explained it and said it would be delivered next day so long as the roads were clear.....I still don't know why they scanned everything as delivered, but I didn't make a deal about it and it did arrive the next day.

I did lose out on a couple of lenses a while back, but I just wrote those off as I had ordered server sets from different sellers and it was going to be difficult to get anything done as they were all scanned in as delivered, but who knows where, so yea, stay on top of it.
Last edited: Apr 14, 2018

was focused today with a large order I had to get done before post then I went down for a bit so had not been following but the advice above is spot on about the calling the post office for your zip.

The majority of the time I see this happen it is the just the mailman making a mistake leaving the package truck. I see this most often in apartments or condos as I note the labels have apartment or unit numbers a lot when this happens. Anyway regardless how it happens from what have been told is if they notice an item not left after they pull away weather it is 5 feet or in the truck at the end of the shift the policy is not to turn around but put it in the missed delivery pile so it can be redelivered. Agree that best course is a call to the local post from the receiver as most the mail that goes back is signature mail which is then held for a certain amount of days think it is 7 or 14 so that redelivery can be scheduled which on those they don't scan till they get the signature and the tracking is still open showing you need to go online or call to schedule a day for redelivery. The call is good as I have seen them sit on them like that but most they time they just show up the next day. Don't call the 1800 number as that is just will add 24-48 hours(even more over a weekend which it is now as they don't work weekends but the local office does) as they will just a ticket and then it sits in que till someone else makes the same call to the local post. Faster to cut out the middleman and extra time as you do want to try to locate it quick if it is not there.

A miss type, old address entered into the shipping to during checkout or a bad auto correction(see this often if the zip has a mistype in one of the last two digits)which I am sending a PDF copy of the shipping label which I always keep to your email for confirmation that it is printed correctly to reach you.

it was delivered to the wrong address but almost always it is to someone in your neighborhood increasing the chance they will let you know.

Someone in the residence did not realize what it was the recipient did get it and either misplaced it or . Only seen this maybe two or three times where the customers replied back sorry it was a mixup by someone in the house or by them.

DTR said:
To me I if I am looking at it up closer I see more of the blue color but when it is viewed off a distant wall I see a bit more green. The picture of the dots is the best representation of the color that I have seen posted yet. With smoke I do get a closer color representation than the pics I put up earlier but still a little more green in person like the dots.

i was gonna rep you for this image alone but for some reason my damn laptop wont let me rep anyone!! only my phone will let me but very nice pic DTR.

^ yep that image went into the keepers folder. Work of art and a beautiful edc

@RB astro, just looking back at your post with the dot profile of BBB's 488 build, it is incredibly clean and almost looks like the dot profile of my PLT5-488 diode.
I wonder if theres any chance it could be an Osram diode? from memory your diode came from Dr.laser, he bought it from ebay as a 495nm diode, and there was one other that Zraffle bought?, but it died from twisted pins. food for thought?