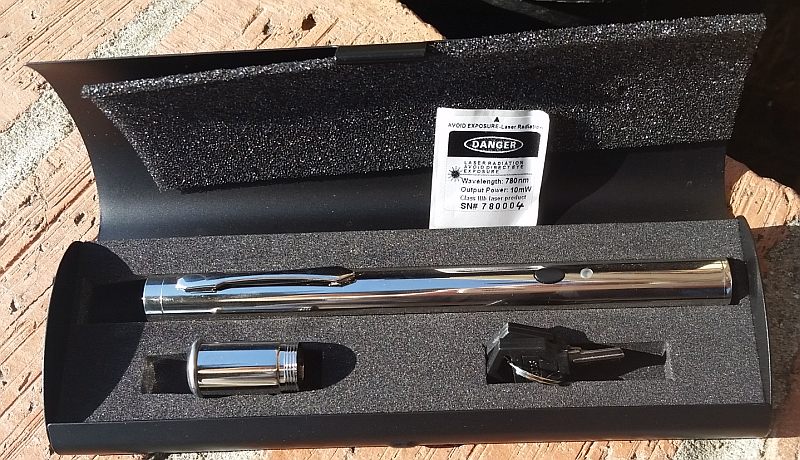 The body is made of brass with a polished chrome finish; it looks extremely nice plus it's pleasant to hold and use as well.

* Pricing is accurate as of 08-19-20; please visit currency calculator for current conversion rate from € to $. 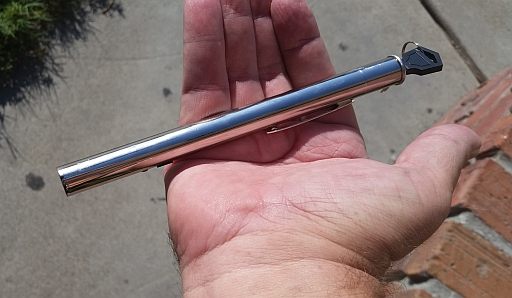 Insert the interlock key into the keyway for it in the tailcap, and gently give it ¼ of a turn clockwise.
NOW you can go irradiate something.

When the laser is on (lasing), an LED on the barrel lights up to tell you that it's on.

When you are finished using the laser, you may totally neutralise it by inserting the interlock key and gently turning it ¼ turn counterclockwise (or, "anticlockwise" if you prefer). Now the laser can't be activated even if new batteries are installed in it.

To change the batteries in this NIR laser , unscrew the tailcap and remove it.

Tip the two used AAA cells out of the barrel and into your hand, and dispose of, recycle, or recharge them as you see fit.

Insert two new AAA cells into the barrel, flat-end (-)negative first. This is the opposite of how batteries are installed in most flashlights, so please pay attention to polarity here. 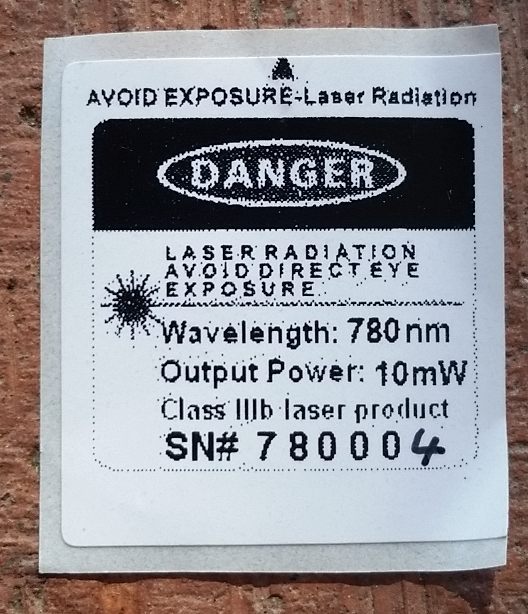 This is the laser warning sticker that was furnished with the unit.
As you can see, it is labelled correctly for wavelength and output power.
(The measured wavelength is a bit long, but still within spec for a 780nm diode)
​
This is a directly-injected laser though, who's active components are the inverter circuit, the laser diode, and the collimating lens. So it should withstand accidents better than a DPSS (diode pumped solid state) laser - the type of laser assembly found in yellow (593.5nm), green (532nm) and blue (473nm) laser pointers. These lasers have several additional components (crystals, filters, etc.) in the optical train, and you can knock them out of alignment by doing little more than looking at them the wrong way. And if any of these components are knocked out of whack, you'll no longer get your yellow, green, or light blue laser beam.

Though you still do not want to intentionally drop your NIR-emitting laser because it's a precision optical instrument.

There is a recommendation that the laser be kept on for no more than three minutes; if it is kept on for longer, bad things can happen.

Lifted directly from the PDF spec sheet, comes the following text (no changes to grammar or syntax were made):


• This laser pointer has been designed for intermittent use. If operated over 3 minutes continually, the temperature of the laser diode may exceed critical threshold, thereby negatively affecting the laser pointers performance and life time 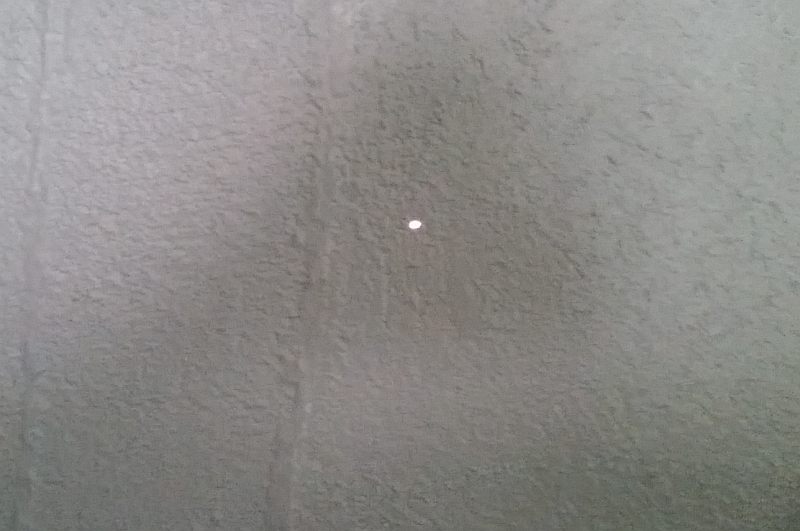 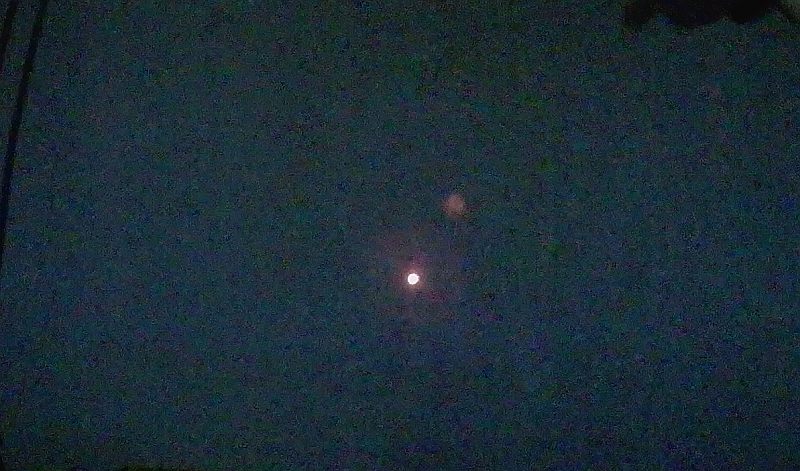 Beam terminus photograph on a wall at 12".
Photograph taken with the camera in my Contixo F24 Brushless Foldable Drone.
Digital cameras have a tough time at these wavelengths; the spot appears to be a dim, dull cherry red glow to the human eye. 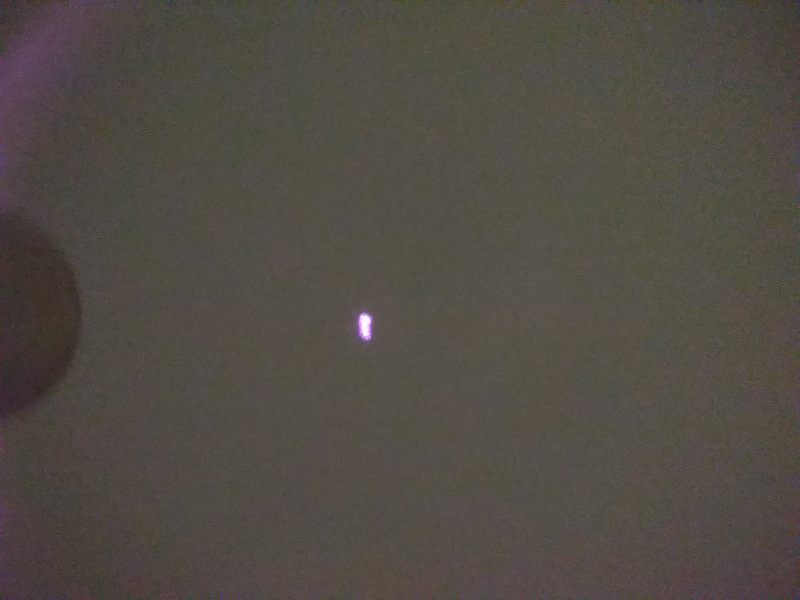 Beam terminus photograph on a wall at 12".
Photograph taken with the camera inbuilt in my Coolpad cellular telephone handset.
Some movement occurred; that's why the spot is oblong in the Y-axis. 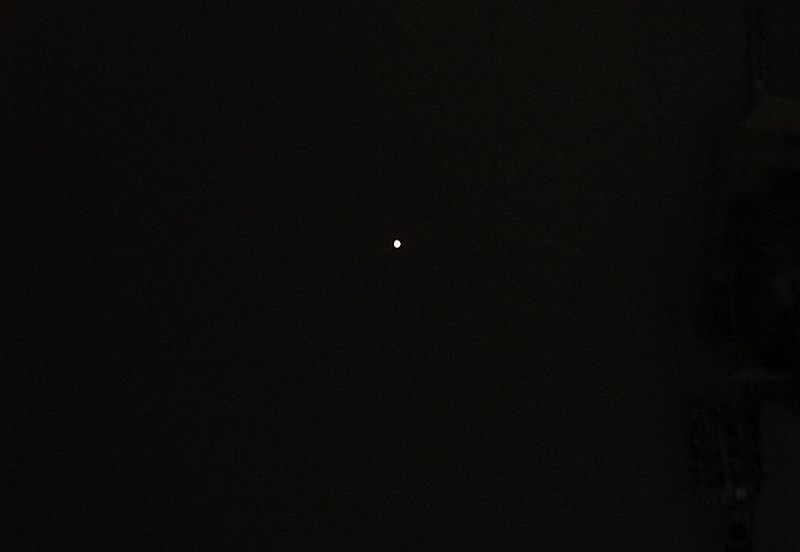 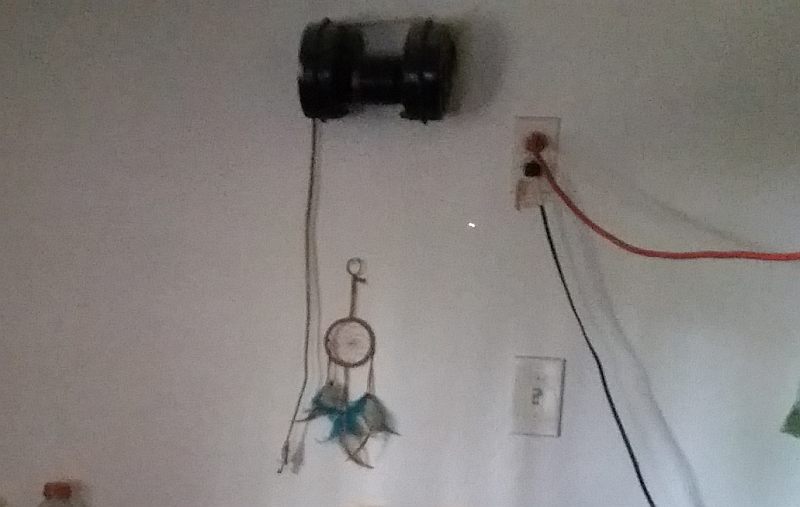 Beam terminus photograph on a wall at ~8 feet.
The spot was not visible at all to the unaided eye; the camera's being able to "see" it is what made aiming the laser possible at all. 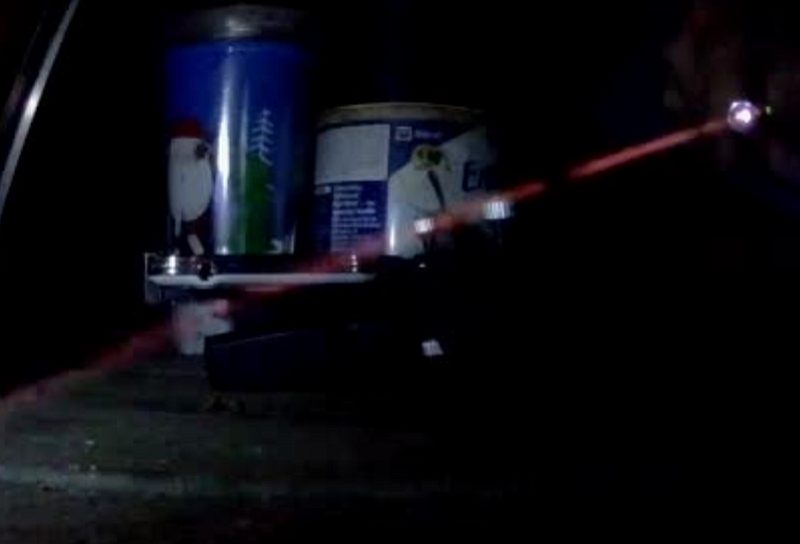 Beam photograph (yes, "beam" and not "beam terminus"[/i]) taken with the camera in my Contixo F24 Brushless Foldable Drone.

Spectrographic analysis of this laser.

Spectrographic analysis of this laser; spectrometer's response narrowed to a band between 780nm and 800nm to pinpoint emission peak wavelength, which is 787.3nm.

The raw spectrometer data (tab-delimited that can be loaded into Excel) is at rpl-780.txt

A beam cross-sectional analysis would normally appear here, but the ProMetric System that I use for that test was destroyed by lightning in mid-July 2013.

TEST NOTES:
Product was sent to me (along with a number of phosphor-type LEDs and an anti-Stokes IR detector card) by Andreas of Roithner Lasertechnik GmbH on 08-11-20 and was received at 8:34am PDT on 08-17-20.

PROS
Unit is labelled (and advertised) properly for wavelength and power output
Beam terminus spot is essentially invisible; but some may be able to see it at short range


NEUTRAL
Not waterproof or water-resistant -- but most laser pens aren't.
Will not figure into my final rating.

CONS
None that I've yet to find

I am in love with your reviews! Such detail and effort gone into them keep it up!

Gianakakis said:
I am in love with your reviews! Such detail and effort gone into them keep it up!
Click to expand...

Thank you ever so very much, kind sir!!!
J

True, but it could be more dangerous.
Imagine this laser with an output exceeding 500mW.

Awesome review, I've been reading your reviews since the early 2000s, still by far the best.

Yes, excellent, very good high quality work. Curious though, did you buy it because you just wanted an IR pointer, or for an application?