USB2000 SPECTROMETER​
This is a long page with at least 25 images on it; dial-up users please allow for plenty of load time. 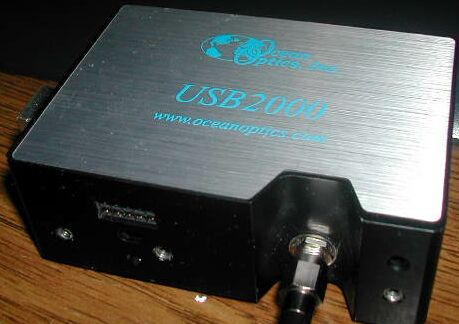 *** VERY, VERY IMPORTANT!!! ****​
This product does not emit light of its own, so the standard review format will not be used and the product will be assigned a rating at once. A very high rating too, as during the time I've had it, it has thus far performed flawlessly.

Also, you must note that a lot of the features of the spectrometer and its software suite go unused, and therefore, unmentioned.

The USB2000 Spectrometer is a very small device (fits in the palm of your hand!) that can provide the spectral content of any UVC, UVB, UVA, visible, or NIR light source (ranging from ~175nm to ~874nm) , using a program called SpectraSuite to show the spectrum on your computer screen in graph format.

Here's a screen dump (yes it's really called that) of the SpectraSuite software window.

This program does a lot, but for this website sakes, I have just been taking screen dumps (yes, they're really called that), cropping them so only the spectral window is displayed, saving them in .GIF format (so that they're "web friendly"), and displaying them on this website; like this shining example:

This is the spectrum from an Arc LS Prototype flashlight.

At this point, I just hit the "Print Screen" key on my computer, open a graphics program like IrFanView and then "paste" (CTRL-V)) my screen capture into it (depending on the image viewer software you choose to use, you may ***OR*** may not have to first load any convienient image into it beforehand and then "paste" the screen dump over it). I then crop it so only the spectral window is displayed, save it in .GIF format (so that it's "web friendly"), and display it on this website.

I'm certain there are other methods of data capture, but for my purposes, this is more than sufficient. Like I mentioned earlier, the SpectraSuite program is *FAR* more versatile, but this method works just perfectly for me. 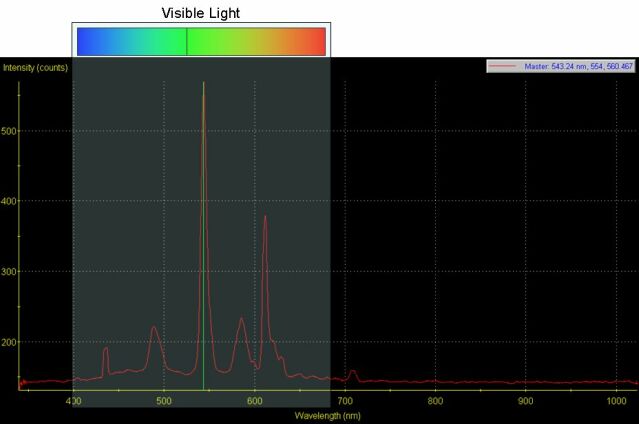 This picture shows you the relationship of visible light to UV and IR radiation.
Picture courtesy of a website fan and was used with permission.


UPDATE: 05-07-06
I have packed the USB2000 up so it can travel with me when I move to Sacramento around 05-22-06.
So I do not currently have it at my disposal for performing spectrographic analyses.


UPDATE: 07-06-06
The spectral chart is about as simple as it gets: wavelength starting at the left from ~175nm in the UVC portion of the spectrum to ~875nm in the near-infrared (NIR) region of the spectrum. The visible range is from ~380nm to ~780nm.
The higher the red line on the chart goes, the more radiation is being generated by the light source under test.

Let's take a look at one of these charts and see if I can tell you what's going on...

This is the spectrum from a typical Nichia NSPW500CS phosphor white LED, generally considered to be the brightest 5mm white LED as of early- to mid-2006.

As the chart shows, there is a strong peak in the blue at ~460nm, and a broad emission peaking at ~560nm in the yellow-green; overall, a cool white color is produced.

UPDATE: 02-01-07
The SpectraSuite software has been revised/updated; now the visible part of the spectrum can be colored, as shown in this example:

This is the spectrum of a Fenix P1D CE flashlight that uses a high-powered Cree white LED.
I used a function of SpectraSuite to limit the spectral display to the visible wavelength range (385nm to 780nm).

UPDATE: 09-18-07
The person who loaned me the instrument now needs it back, so I no longer have it at my disposal.


UPDATE: 09-18-07
No, you aren't seeing things.
Yes, a same-day update.
I have been informed that this spectrometer or another similar model will be loaned to me sometime in the future; so spectroscopy will not be forever gone from this website.

UPDATE: 06-10-08
The optical cable appears to have failed, however I can still take spectra, and the optical cable from my PC2000-ISA spectrometer may very well fit - however since it is packed in an unknown box for a move to take place in a couple of weeks, I cannot verify this. But like I said, I can still take spectra; the only thing here is that I have to keep the instrument itself where I can directly irradiate it with the light source under test rather than keeping it tucked away and using the optical cable for this purpose.


UPDATE: 06-11-08
I found the PC200-ISA spectrometer's optical cable last night, and it does indeed fit and work with this spectrometer...so I'm back in business as they say.

UPDATE: 06-26-08
The baseline *CAN* be lowered through SpectraSuite; I had been doing this with Photoshop until now (primarily with lasers).
Here, let's let the following graph do the talking here:

Note that there is no visible emission outside this yellow LED's native emission band.


UPDATE: 07-24-08
I have disconnected this instrument from the computer and screwed the metal "bung" over the light input aperture to help protect it from foreign matter. The next time this instrument will get used is sometime after 07-28-08 when I'm at my new location. I could be without internet access until as late as 09-01-08!!! Though this is highly unlikely, the probability is not mathematically zero.


UPDATE: 05-28-09
I have discovered a setting on the SpectraSuite window that's proven rather useful over the last several days...see where it reads "Electric dark correction" in the screen dump below?
I ticked (left-clicked my mouse pointer in) that box, and now the baseline sinks even more deeply. Instead of having to set it close to 200, I can now set it to 10 - this gives me greater range to play with, especially when dealing with weaker light sources.

The only "fly in the ointment" as it were is that the maximum vertical height of 4,096 is decreased by just under 200.
Here, let me demonstrate this with another screen dump; this time of the top of a white LED's spectrum:

See how the top portion appears "flattened" yet the spectrum isn't quite at the top of the scale? This though I *CAN* definitely live with...after all, this adjustment benefits weaker light sources, not stronger ones.

The USB2000 in quiescent mode; this "spectrum" shows only detector noise, which is very easily cancelled out.
As I just said, this is extremely easy to compensate for; it actually looks a whole lot worse than it actually is.

UPDATE: 03-06-10
I have fielded a number of questions about how to use this instrument over the last several months, so I think it's time to show you.

1: Fire up the spectrometer (of course) -- you do this by launching SpectraSuite.

See the little "x" characters at the upper right of the "Data Sources" and "Data Views" boxes?
Click on them; the following screen shows what you should now see.

Where it reads "Graph (A)", look just below and to the right of it for a number of icons. Click on the fourth one from the left (the one that looks like a magnifying lens with the number "213" in blue lettering in it).

Place your cursor (mouse pointer) anywhere in the chart, and right-click on it. The box you see above should then pop up. Click on the "Visible Spectrum" tab, select "Show Visible Spectrum Layer", click the "Clip Visible Spectrum to Trendline" radio button, then click the "Send Layer to Back" button. Finally, click "OK".

Click on the "Electric Dark Correction" box near the upper right of the window; a green check mark should appear in it when you're successful.
It does not matter when in the setup process this box is checked; so long as you check it before you take your first spectrum.

Finally, you may irradiate the spectrometer's sensor aperture with the LED under test. Move it slightly if the spectrum gets a flat top (indicative of excessive light) or does not go high enough (indicative of insufficient light). When the spectrum looks good to you, click on the button with the two thick black vertical lines in it.

What you do with this at this point is up to you; I simply press the key on my computer labelled "PrtScrn/Sys Req", open an image viewer, and press CTRL-V (paste). I then crop it so that only the spectrum itself is shown, and save it in .GIF format (this is a web-friendly format that does not cause distortions from .JPEG compression).

There appears to be no facility to "save settings" (well, not that I've yet been able to find anyway), so this setup procedure has to be performed every time you launch SpectraSuite.


UPDATE: 07-23-11
I performed spectroscopy of sunlight with the soft red plastic "bung" that fits on the sensor to protect it from things like dirt, mud, dust rabbits, monkey pee, horse puckey, etc. during storage or transport.

UPDATE: 11-10-11
The SpectraSuite software by Ocean Optics has a couple of rather prominent web pages.

UPDATE: 11-16-11
The calibration report (data sheet) for this particular spectrometer is at this link if you're interested in viewing it. This is a .PDF file; you'll need to have Adobe Acrobat installed in order to view it.

Thank you ever so much!!!

UPDATE: 02-06-16
The final release of SpectraSuite software is at http://oceanoptics.com... (approx. 80% down the web page). I've been using it for the last several months, and it has thus far performed flawlessly.

For the last few years, I've also been capturing spectral data files (in .TXT format that can be imported directly into Microsoft Excel or other spreadsheet software) that many of this website's visitors have requested.

I really do appreciate the promptness of N.D. from Ocean Optics in getting this data me (YES, A SECOND KUDOS TO NORM!)

Thank you ever so much!!!

Started eyeballing some spectrometers recently so I can add some more details to my testing threads. Thanks for all the details. Lot of great info to absorb when I get a chance to go over it all in detail to get familiar some footing on them. Should motivate and give some direction. Thanks for posting.

Too bad you had to send this unit back. I would suggest you use an Ocean Optics fiber optic cable to couple light into the spectrometer as this makes it much easier to get a clean source into it as opposed to using the slit alone.

paul1598419 said:
Too bad you had to send this unit back. I would suggest you use an Ocean Optics fiber optic cable to couple light into the spectrometer as this makes it much easier to get a clean source into it as opposed to using the slit alone.
Click to expand...

If you read the 03-08-08 update, I have permanent custody of the instrument!
Here, let's snip that out of my review and post it here...BRB...

I agree that using the fiber optic cable as a coupler would be best, but it became broken in 2009 so I have to make do with irradiating the slit either directly (with weaker sources) or off-axis (with stronger sources).

You never let us down with your in depth reviews...
Another excellent one.

lasersbee said:
You never let us down with your in depth reviews...
Another excellent one.

Congratulations on the epic new instrument. I cannot think of anyone more deserving!
I too, remember the time before blue LED's existed. And visiting the LED museum on dial up.
Now I have a cable modem and 2 flashlights over 5000 lumens, A BLF Q8 and a Sofirn Q8.
Best wishes from a long time reader and fan!

On thing I need to figure is how to,tell the software to ignore a range. For example looking at Raman. Ignore the excitation wavelength. Overlords the detector so tell it to ignore a pixel range.
You must log in or register to reply here.
Share:
Facebook Twitter Reddit Pinterest Tumblr WhatsApp Email Link