Ole "Big Boy" there has real penetrating stare, looks like those eyes could bore right through you! :crackup:

Here's my leopard gecko staring down some lunch. I'm reminded of Jurassic Park when he's hunting them. 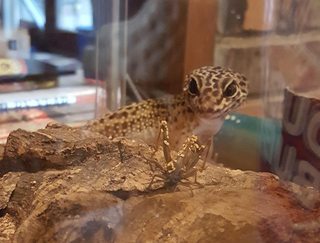 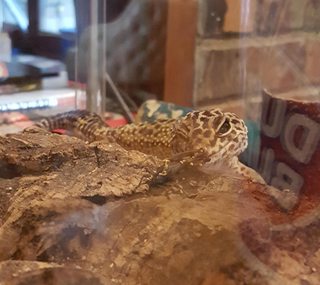 The leopard gecko is a very popular pet-- I most like the way they 'blink' not using their eyelids. They are not biters-- like one of the biggest the Tokay IS- looks awesome and gets much larger BUT a biter and they do not afaik 'tame' .

I have a Leopard Gecko too, and watching them hunt is fascinating.

Here are some quick pics.

Here are some images I took today of a few of my other pets.
Look away if you have arachnophobia.

My smallest tarantula. A Honduran Curly Hair (Brachypelma Albopilosum).
She's around 4-4.5" atm. Another half an inch to an inch to go till fully grown.

Now to my largest. My Chaco Golden Knee (Grammostola Pulchripes).
This was my first tarantula. When I first got her she was around 4" but now is a nice 6-6.5" in size.
She could have as much as 2" still to go. I love the golden stripes on this one, especially when freshly moulted, and she is nice and docile.

Then my Brazilian Black (Grammostola Pulchra).

Currently she is at 5-5.5" and can grow anywhere in between 7-8" in size.
All tarantulas have their own personalities, and this one started out as a heavy hair flicker.
She has calmed down a lot, but occasionally goes on the defence.
The slight balding is not due to flicking hairs out at me, it's it flicking hairs out as protection around it's web.

Lastly my Chilean Rose (Grammostola Porteri) who was a bit camera shy today.
This one was wild caught, and sure is crazy when it's hungry. I've nearly been bit by this one, as a cricket got stuck its leg stuck on my finger.
It often pounces at the water dish as well whenever I pour more water in it.
This is my second largest at 5.5-6". It's nearly fully grown, but some variations of Chilean Rose have been know to get larger than expected.

Look at their little eyes. How can you not love them?

Anyway, I have also got a lovely cat and dog.
My cat is a has silver striped bengal in it and my dog is pure chihuahua.

And both of them together.

Here is my male Hognose snake. Got a male due to their smaller size.

I also have two chinchilla's.

And that is it.
I used to have Emperor Scorpions but they unfortunately died.
Last edited: Jun 30, 2018

GEES, Curtis. You have more of different species than most. Your dog looks to be a little to well fed. I have usually stuck to dogs or cats. Not much of a cat guy, but the women seem to like them.

Thanks for sharing, they're very beautiful, and nice to look at, but I'm like Paul, more of a cat and dog guy.

I was a cat and dog person too, but now I have all sorts. Although I have all of these animals, it doesn’t take much to care for them. The mammals take caring for more than the reptiles and arachnids. Although the hognose is being a pain atm. It’s hot and humid over here and he keeps going into his water bowl and grubbing up his home more often than normal. He needs cleaning out again.
As for my dog Paul, yep she is a little overweight. Party due to the operation she had, and that she is naturally stocky inherited from her dad. She does like her meats though.
G

Wow Curtis, its like I went to the zoo and their colors are beautiful..
I have some weird phobia's but snake's spider's or any insect doesn't bother me.
Do spiders and geckos grow in proportion to their tanks or cages like tropical fish do?
Years ago a friend had a couple iguanas maby 3 or 4 inches long and when I happened to see them a few years later they huge, easliy a foot and a half! Poor friend didn't have the best luck with some of his pets He lost a dog to a chicken bone, had a cat that got electrocuted after constantly chewing on lamp cord. He tried hard as disposing trash and putting sticky tape on the cords but could only do so much..
This one other incident was awful....he had a kiddie pool with 3 huge turtles that were at least 10 years old, all set up with slates, rocks, goldfish etc. and put on a outside porch in the suburbs and came home from work and all that was left was 3 cleaned out turtle shells:can: A raccoon ate them up. Even in the city they are around.
Really nice pic's and collection, and love the little chubbie chihuahua

BTW, keep an eye out on the chinchilla's..They look like rabbits and RB like's to have lots of barbaque's
Last edited: Jun 30, 2018

Lol, I do feel like a zoo sometimes.
As for the enclosures, it's the other way round, reptiles and arachnids need proportional enclosures compared to them.
Sorry to hear about your friends misfortune. I've lost cats due to maliciousness in the past. They were poisoned. I've also lost two gecko's and two emperor scorpions due to ill health.
But other than that, I have been fairly lucky with my animals.
Oh, and don't worry. Andrew will not be having my chinchilla's for his BBQ.

Awww, no pets are ever harmed at any of my BBQs...
LOL

My funny cat, always acting dead. I'm thinking of giving her something that will make her more active, upon searching, I saw these cat supplies which has a cat bed, toys, carrier, litter pan and many more.

Your cat looks like it's in deep sleep. I have seen cats sleep like this before. Not a cat person, myself, but my exwife and my daughter were. My cats (Tigger, and Simba) Thalia, that's a cute kitty, but I think you need to check for a pulse! :crackup:

@Brendan, those are 3some very handsome pets you have there; I see a common color scheme going on here!
G