Due to my budget isnt enough ~107USD (~3400 THB) .If I order from DTR's store .I will gor charged from import tax around 30USD.It not worth for me.Anywhere .I dont like to play with those High power LD.I will ruin my eyeball(need glasses ) and other stuff.

Is barrnet_unlimited and newgazer both scammer from ebay? (Having trouble searching forums on them sorry if asked already) Their deals seem to good...

Newgazer is the same as Techhood and Existotem. They are all good, legitimate companies I have bought from for years. Barrnet_Unlimited is the brother of Alex Barrnet who did have some bad deals, but his brother seems to be okay, though I haven't bought from him yet.
K

Thanks so much for the input Paul, your experience is invaluable. Puts my mind at ease a bit... Now to find some affordable safety googles so I don't burn my eyes out with those things, an a spectrometer... Which I hear is impossible to find good ones that arent 40+ lol..(Open to tips on that) =/

I have an Ocean Optics USB2000+ spectrometer. I like Ocean Optics spectrometers and their OEM software, but they aren't cheap and to get a good working one will cost you ~$1000 used. You will still need the software and all sorts of odds and ends to use it properly. Plus, there is a learning curve for using one properly. They aren't just simple instruments that anyone can use with an hour's training. I would get more familiar with lasers before you delve into optical spectrometers.

I would not expect someone outside of China to be pulling this crap regarding the laser power output of something they have listed on ebay, but this guy in Greece sure did, see the listing indicating this device produces 15 watts, and his email response admitting it is really 6 watts output: 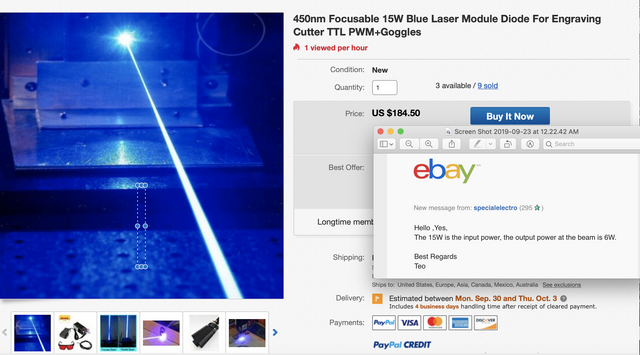 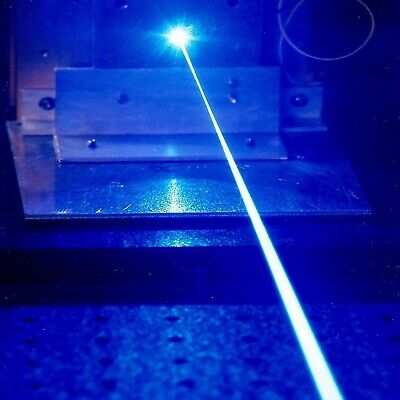 I was wondering if they had combined the power of more than one NUBM44 or were pulsing the power above the devices rating. Neither, just a simple lie as no one rates a laser for its input power like they show this, buyers would naturally expect the rating to be the beam output power.

It is a way of misleading people without actually lying. Though, I believe the input power is higher than 15 watts, so he isn't being truthful either.
E

It is worse that --is outright misrepresentation/fraudulent---actually lying + is more than double what anyone else is selling same thing for.
If you look at the actual listing you can see the listing says specifically 15W diode.

So many sellers on Ebay have a habbit of posting the "Input" power to the Laser Diode. Not the optical output power.

The optical output power is probably less that 5 Watts.

See I always thought argons were inefficient, but these chinese 100000MW input lasers that only produce 100-200mW take the mick.

OK, confirmed now, the ebay seller is still misrepresenting the power of these NECSEL devices as 10 watts output. 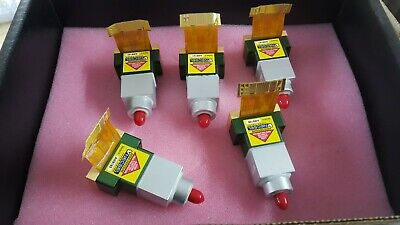 Alaskan said:
OK, confirmed now, the ebay seller is still misrepresenting the power of these NECSEL devices as 10 watts output.

Find many great new & used options and get the best deals for NECSEL 10WATTS AVG MAX --5PIECES LASERMODULE at the best online prices at eBay! Free shipping for many products!
www.ebay.com
Click to expand...

That device is horribly inefficient at 3.8 percent, if it really produced ten watts output it would require near 300 watts of power input. 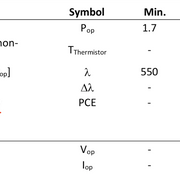 Click thumbnail to see the specs for that NECSEL.

A lot of laser manufacturers put labels on their equipment like that, they too often have a one label fits many, such as put a max power 10 watt label on anything under 10 watts, a max power 20 watt label for more than 10, but under 20 watts etc. I see this quite frequently on ebay offerings and the sellers will parrot the sticker on their listing as a specification when far from accurate. Like the stickers which for example say something like 800-1000 nm, they will then often list the unit as a 800 to 1000 nm laser when it is really some specific wavelength within that range.

Take this listing for an example, the seller is clueless these are not 900-1000 nm lasers, but that is what the label on the side says when it is actually 976 nm, but is indeed a 20 watt module, that is the problem, some manufacturers list the real power rating on the device, others way off from reality.

P/N: 100406023. SEE PHOTOS. All images taken in house of the unit(s) being sold, except for multiple quantities where item received will be in similar or better condition. Our warranty excludes all consumable goods, eg.
www.ebay.com

http://dilas.com/assets/media/products/DILAS_SE_Module-NLW_976nm-20W_HS1-PM3.pdf - Whether it is good or not is the question..... I don't like buying from surplus outfits who don't know this technology unless the price is so low I am willing to take a chance, and that's hobby dollars low, not compared to the original price low. This does allow a best offer, but I'm not interested in it, I already have some 30 watt 976 fiber coupled modules.

Here's another laser as an example, the sticker on the side says 6 watts maximum, it's rated for close to half that. I have one of these but didn't push the current high enough to see if it could really reach that for intermittent duty cycle, maybe this one can? Probably not a good idea to try but they do design them conservatively, within the normal operating cycle, but eye surgery lasers are only pulsed for short periods of times, which this unit (link below) was used in, so I just don't know if it can be pushed that high or not yet.

Many do not understand the powers of different laser classes. This is NOT the power of the laser but the upper limit of its class.
SO-- it is 'less than' xxmW. NOT 'equal to' xxmW.
however that is not the problem with these...SHAME ON THEM!!!