I had a run-in with an "FBI agent" yesterday...

This forum is ticking with the precision of a swiss watch, or must i say a atomic watch,...:gh:

This much red eye (especially if your camera does a pre-flash for metering) indicates the person is intoxicated. Usually a pre-flash dilates the pupils enough to reduces/prevent red eye. His are wide open.

jib77 said:
This much red eye (especially if your camera does a pre-flash for metering) indicates the person is intoxicated. Usually a pre-flash dilates the pupils enough to reduces/prevent red eye. His are wide open.
Click to expand... 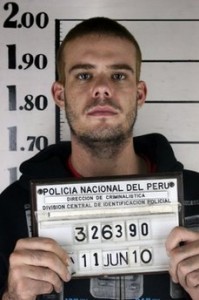 I'm sure if you'd gotten a good look at his supposed "F.B.I ID" you'd have seen it says Federal Boob Inspector or some crap like that. The fact that he backed down around your parents convinces me he's probably a phony.
T

By the looks of this picture he's going to enjoy whats coming to him in prison :crackup:
I

A somewhat trivial update: I've removed the picture of the (phony) "FBI agent" for now, as I have heard from some sources that it was indeed illegal to photograph FBI agents. I do not think this is true, and I am 99% sure that the guy was fake, but I decided to take down the picture just to be 100% safe. My parents have advised me that removing the image would give me the best legal leverage should something happen, and I agree with them.

By the way, I think it was indeed in my best interest to put away the laser. Even though the guy would not have been able legally confiscate my laser, I figured that he was more likely (compared to the other people) to call the cops and say, "Help! There's a crazy guy running about with a futuristic terrorist weapon!"
Last edited: Jul 1, 2010

Good points, but doesn't excuse a fake FBI agent approaching you. Did you talk to the cops?
I

Tech_Junkie said:
Good points, but doesn't excuse a fake FBI agent approaching you. Did you talk to the cops?
Click to expand...

I'm in the process of doing so. However, I want to make sure I have all of the information first; I figure this would carry more weight than filing a report now and sending in additional information later. Specifically, I am trying to confirm with the FBI that I have correctly identified the guy as an impostor. However, the agency has not responded to my e-mail yet, so I have forwarded my questions to the county police. If I still don't get a response, then I will make the report anyway.

This reminds me, there's actually another possibility: the guy did work for the FBI, but as an employee in a civilian position. In this case, it would still be illegal for him to claim that he's an agent.
Last edited: Jul 1, 2010

Good, I'm glad you're going through with it. Most people would let it slide. If the guy is truly some freak, you may stop someone from getting hurt in the future. +1 for your persistence on finding the truth, and for not failing to do what's right.
I

It's been several days, and neither the FBI nor the county police have responded to my query. I suspect that catching an FBI impostor is not very high on their list of priorities, but that is not going to deter me from filing a report.

My gut feeling tells me that it was a spur-of-the-moment thing, and it is unlikely that the guy is a (for lack of a better term) career criminal. Nevertheless, it would be nice if the authorities had some sort of record, just in case he decides to do something worse than trying to scam a fancy-looking laser.

If everything goes well, I will have the report out by tomorrow. After all, somebody's gotta pay for ruining my evening.
I

Just so you know, I've reported the incident to the FBI and the county police, as well as another nearby police department for good measure.

Unless anything else happens, I don't think I need to take any further action.

Looks like you did what you could. At least it's been documented.

DiRollin said:
By the looks of this picture he's going to enjoy whats coming to him in prison :crackup:
Click to expand...

I dont get what this guy did, what did he do to be sent to prison?

you must not watch too much news!

you must not watch too much news!
Click to expand...

not really, what did he do?