I have had a couple of small heavy copper hosts for some time and I finally got around to putting a build together. I can't remember who I purchased them from but I know it was here in the B/S/T section.

Here's the 2 hosts along with a few laser66/leadlights that I already build but haven't shown. Just waiting to finish 2 more before showing a whole bunch of them. I should have taken more pics of the copper build but I'll show what I did take: 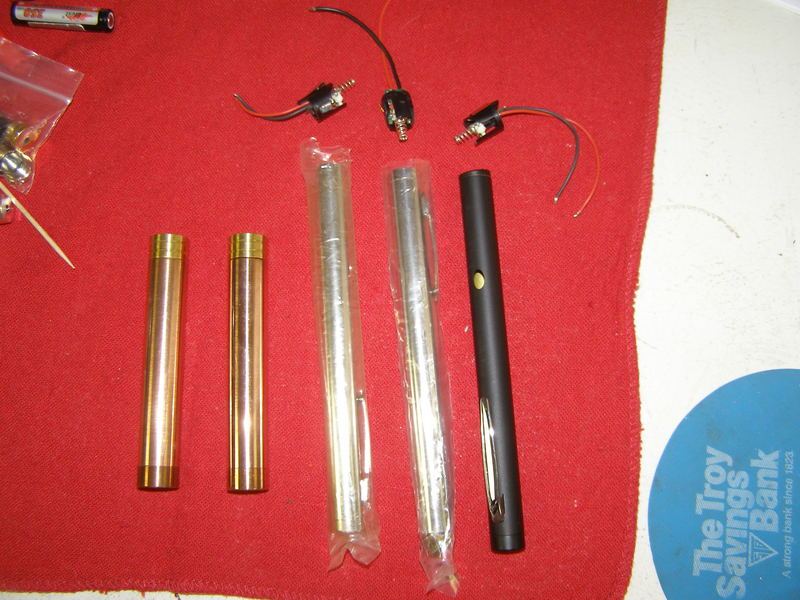 There are a couple of small brass ends as focus knobs but they are not threaded so I widened the inside holes slightly to fit regular focus knobs and made them slightly deeper and then glued them in place: 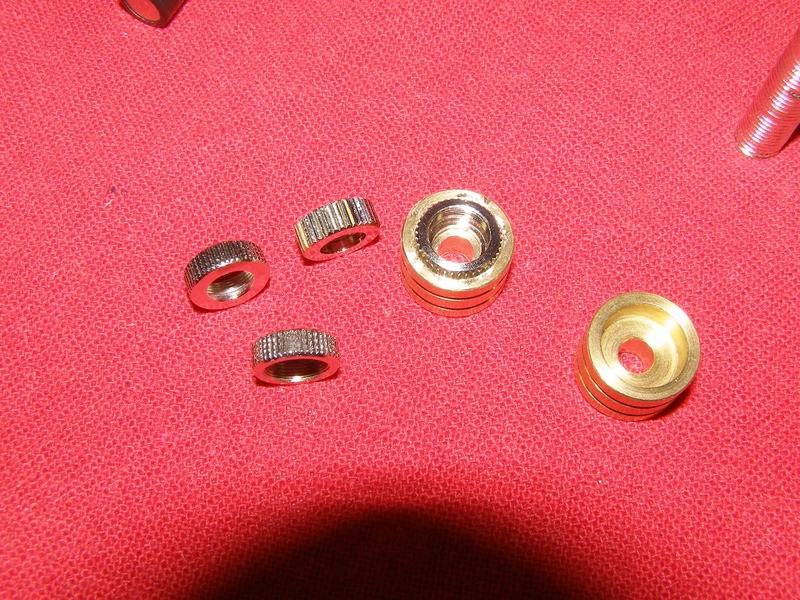 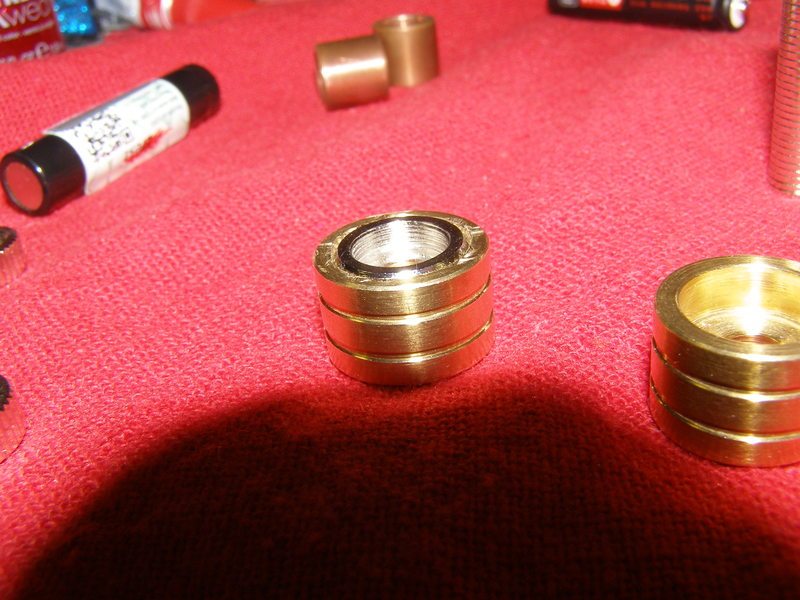 There's a shelf down inside for the module to press fit to: 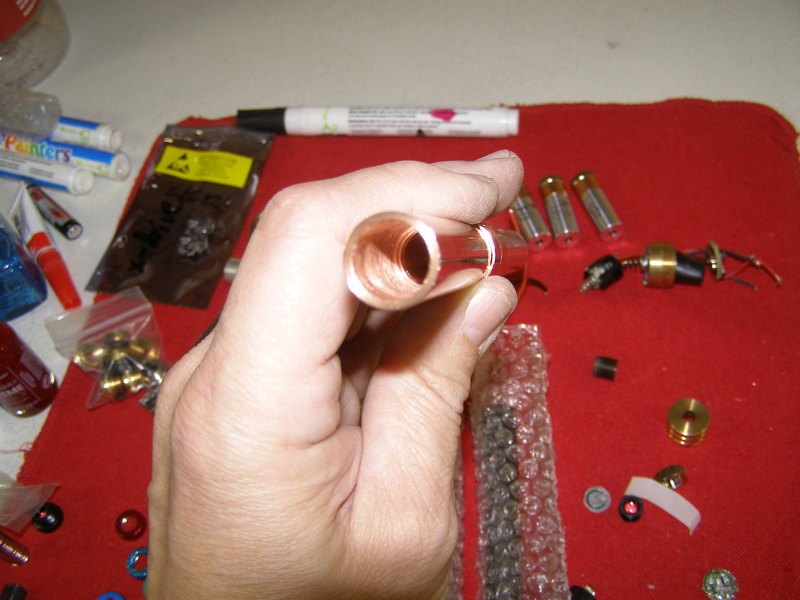 Pressed in the diode, soldered and secured the driver and heat-sinked it and then made the aluminum module piece lip thinner/wider: 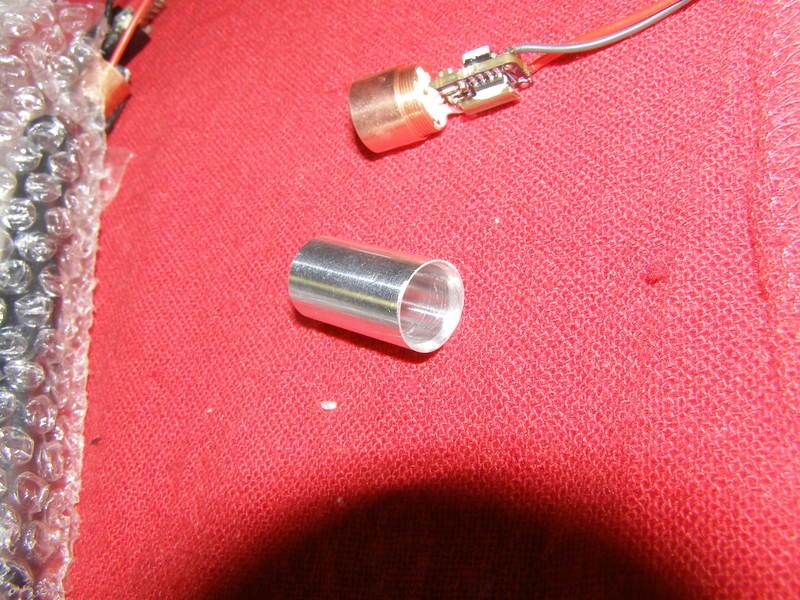 Took a contact board from a small flashlight and trimmed it removing the components and then pressed it onto the end of the aluminum module piece after soldering the driver connections to the contact board: 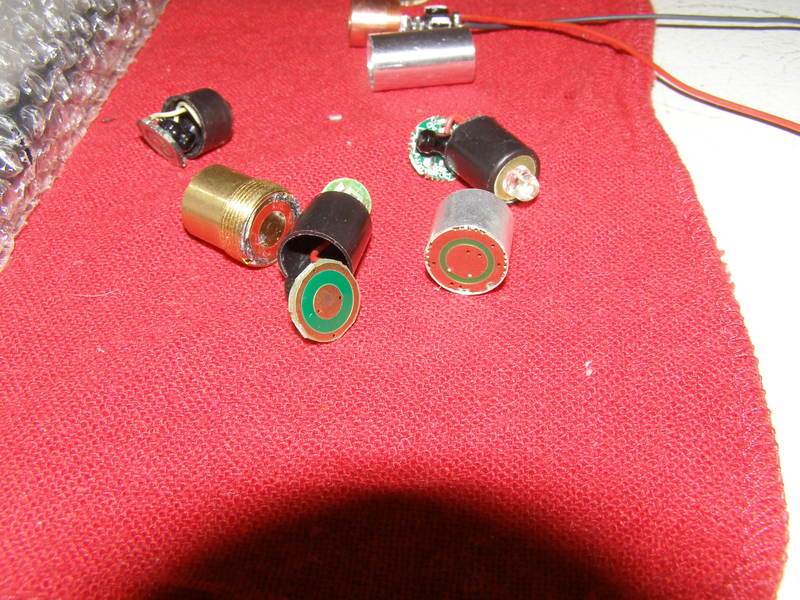 Pressed the completed module inside the host and used some thermal grease although it was really tight anyways: 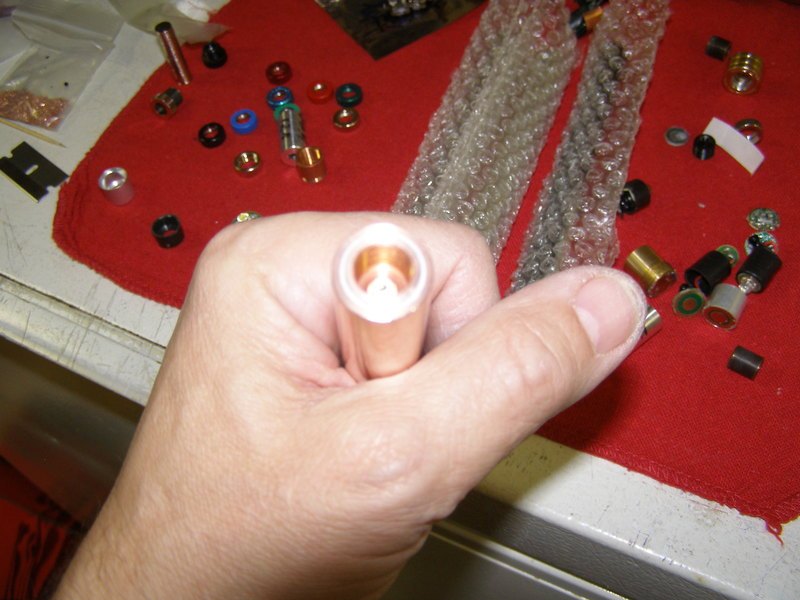 Was going to just build a low powered 462nm with one battery for over 100mW but then realized I could do both by adding a coupleing (very tight) so I can either run it low or at 2.2W with (2) 10440 and a spacer: 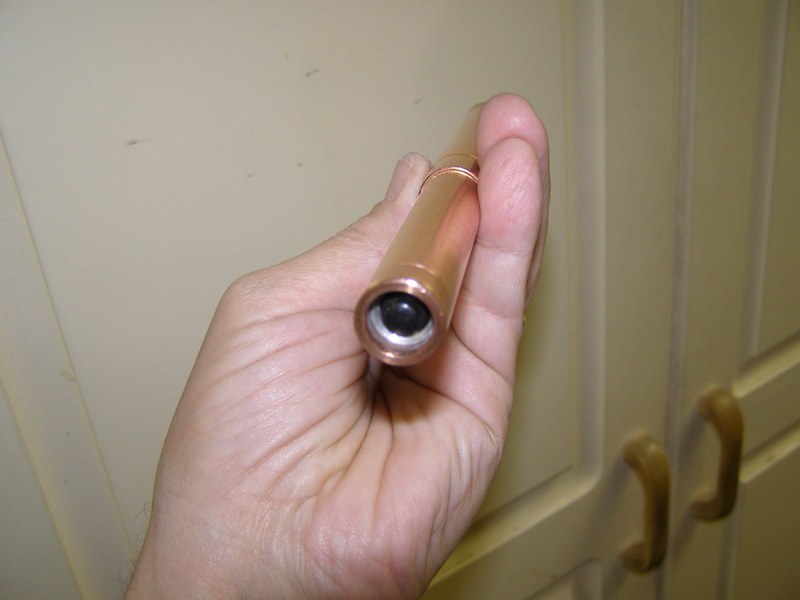 The tiny magnet on the - battery end as the button contact is flat: 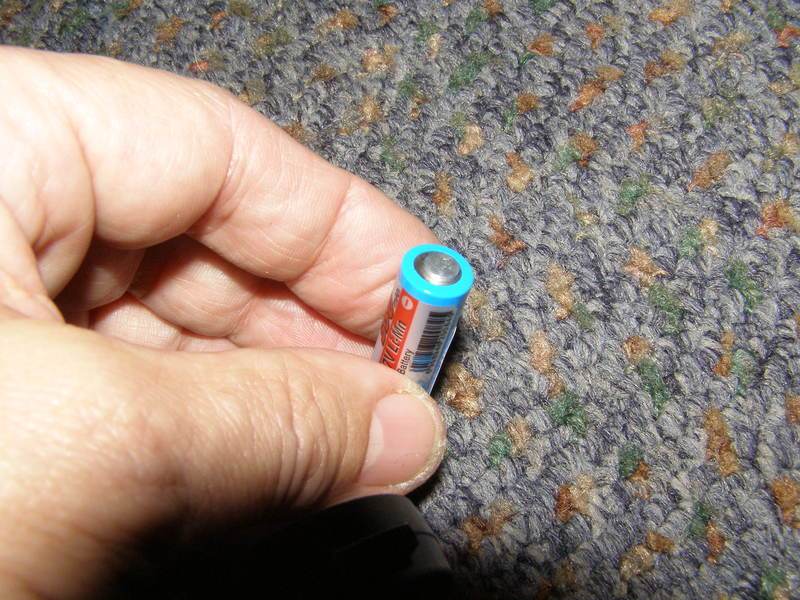 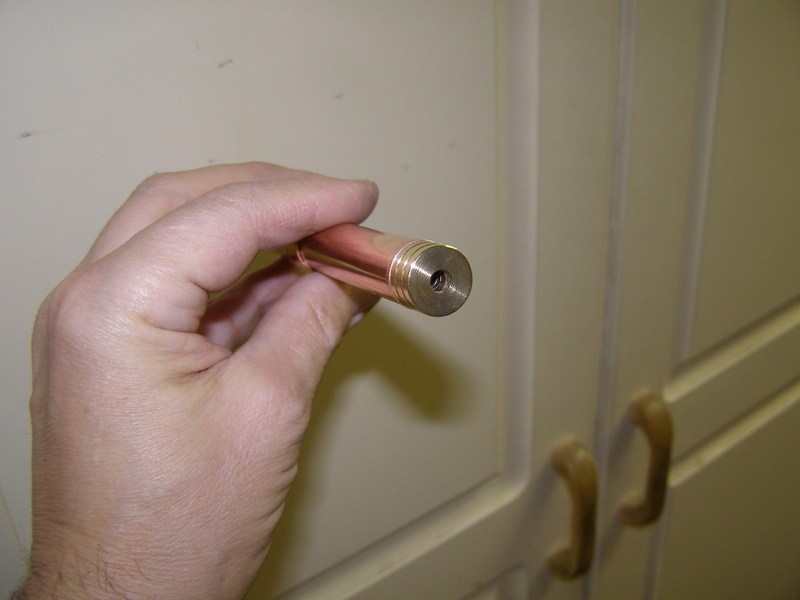 It is perfectly straight. Just an illusion from the pic if it looks bent to your eyes. 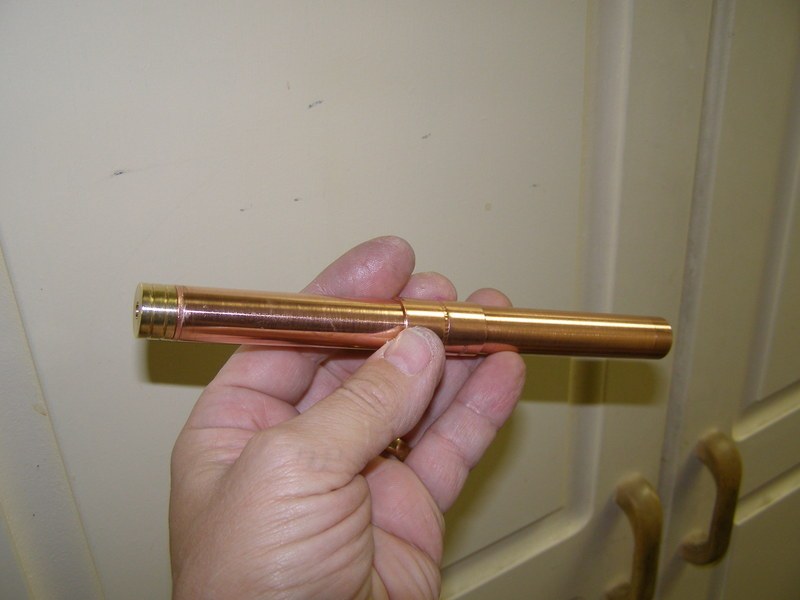 I'll be adding some beam shots later this afternoon 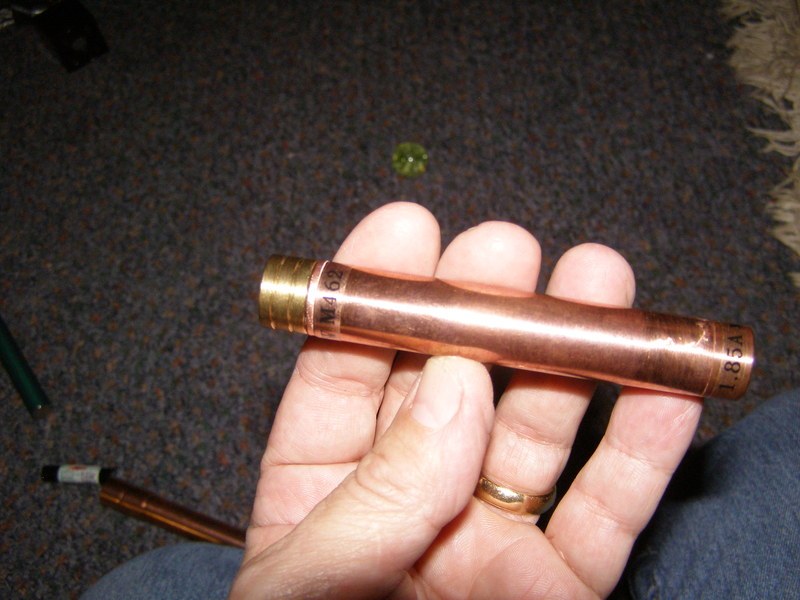 Here's the output with a 3-element because I forgot to put a G2 back in before measuring otherwise it would probably be about 270mW: 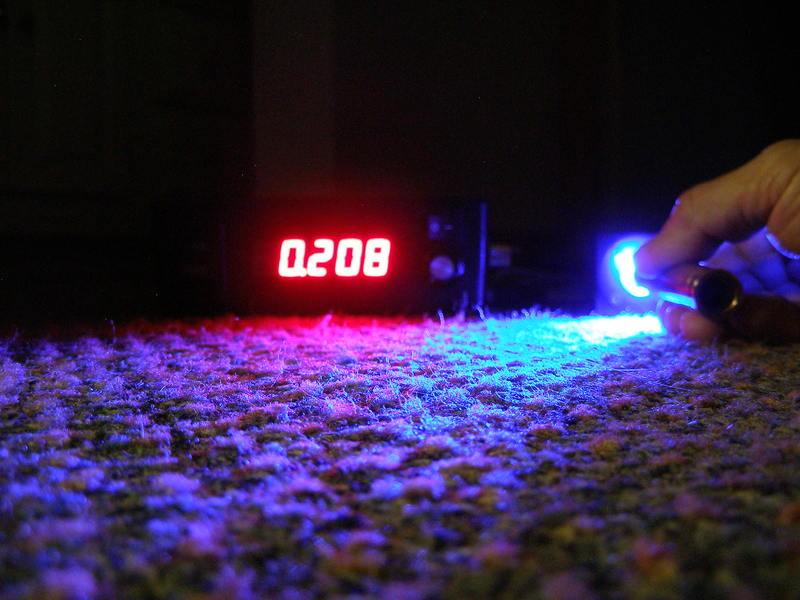 Shining at a Uranium 1" marble it's too bright even at 208mW: 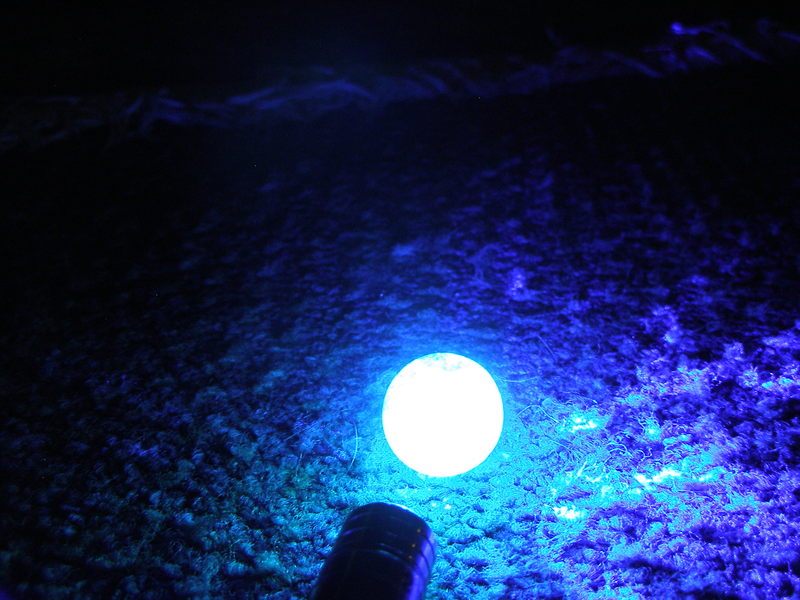 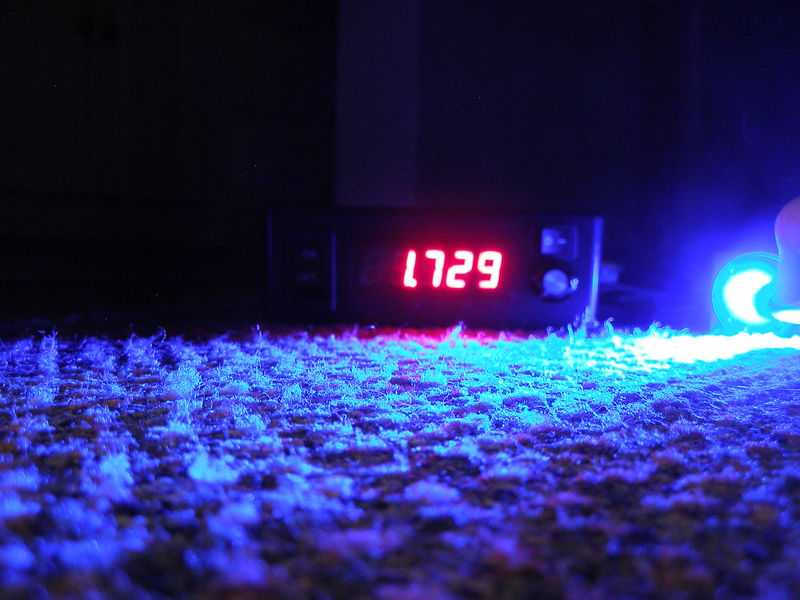 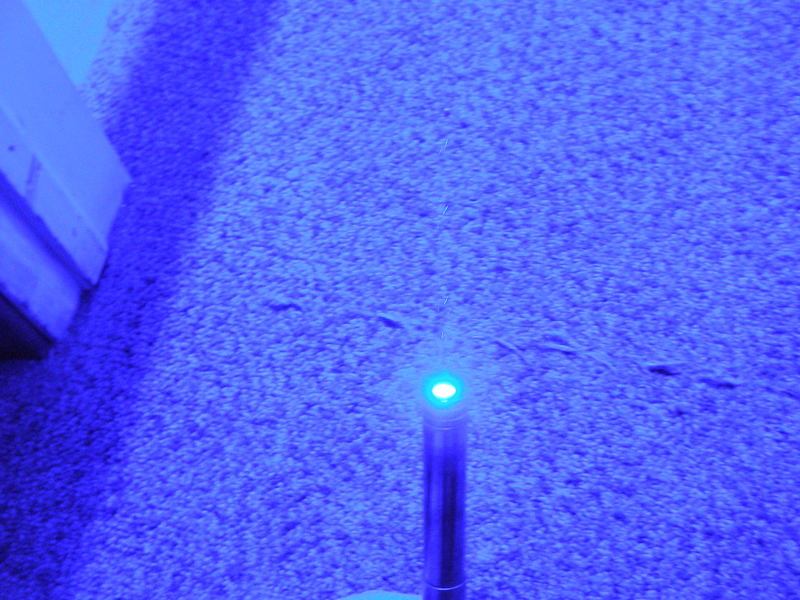 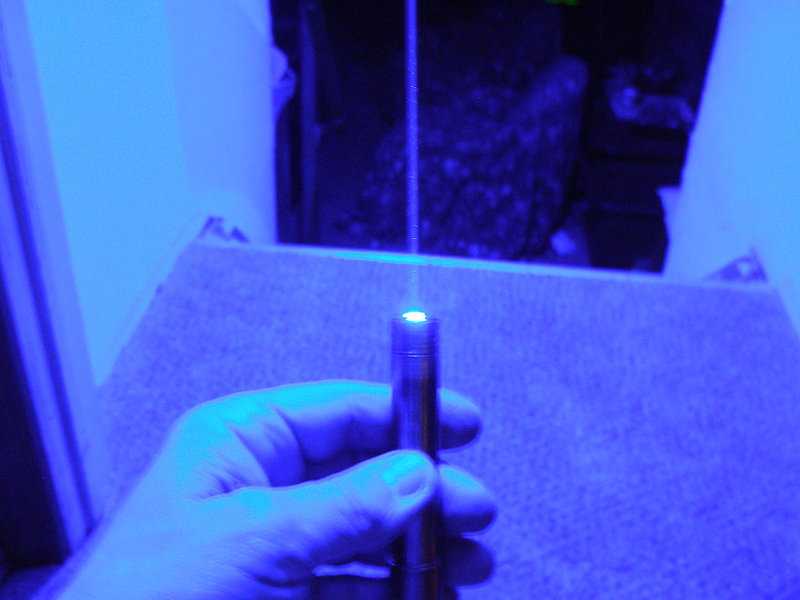 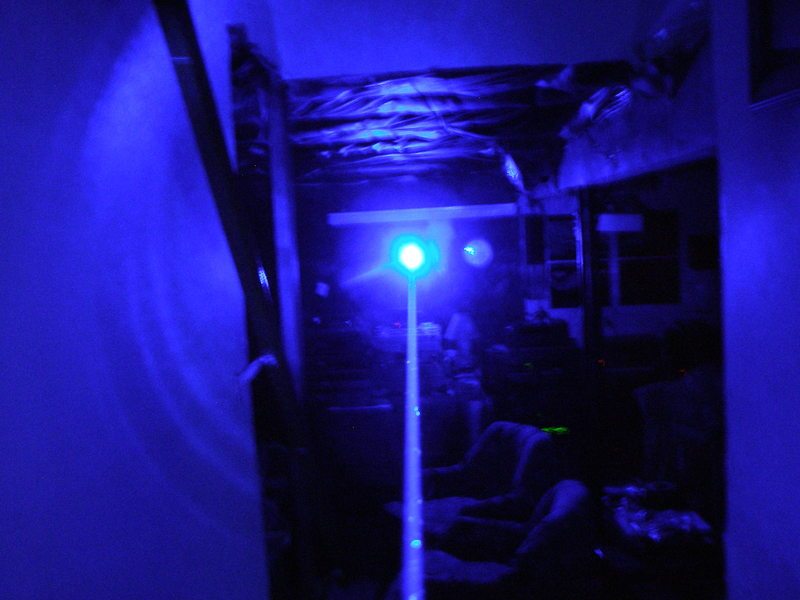 Hi Pman,
Those copper hosts were made by Sinner , they are a 2-cell/10440 host or a 1-cell/10440 with a spacer. Be careful about using 2-cells for the draw might be to much for the switches and the spring inside will fry. Hope you have better luck with the switches than i . I purchased about 20 of the switches so if you run into trouble i can send you some.
Ok and this is how i did the build in mine here are some pics but i like your contact modding . Rep+They won't let me

You did say they were coming and you deliverd with more to come Pman its the little things you do that what pics are all about an example the standard focus knob pressed in. While doing these things with just mostly house hold tools:beer: I'm waiting for the beam pics and curious how hot and how long you can run it on 2 batteries. Thx for sharing

Hi GSS,
Yes i'm waiting to to see if the switches hold out with a 2-cell build like that compared to mine, Hope we get to see a beam shot before . Hope my man has better luck with those switches thats a sweet build love them hosts.
Rich

Hi GSS,
To funny those hosts are the bomb full CU sinking. There great for single modes, i have one left . Built all the others i had ....
Oh and what do you mean we can wait for some beam shots no way break out PMan !!!!

I just got out of church but we are going shopping for some things so I'll likely have pics in a couple hours.
I could have put a bushing between them so there would be a permanent internal seemless connection between the halves but this way I can pull the halves apart no matter what if I want too.
Had no idea the switches are that bad. Switched it on/off at least 20 times messing with it running full 2 cell 2.2W and no issues at all but it's never been on more than 10 seconds. All that copper sure makes a great heat-sink. I'm sure there wouldn't be an issue at all running it with a single cell with spacer or pulling it apart as a small unit running with 1 cell.
As far as how long I could run it I would guess possibly minutes but I just don't do that. The only reason I would have it on for more than 10 seconds would be for picture taking.
Thanks for offering me some switches. We should all be helping each other like that. I can't seem to fiND the other switch piece that would have been used if I had made 2 units. Need to go through my stuff again.

A couple other pics added and some beam shots too
I would go so far as to bet that the batteries would run out before it would overheat. Lots of wonderful copper in that host to absorb it and you can tell.
Last edited: Feb 28, 2016

Very nice.
There is something special about compact and powerful that feels good in the hand, and the copper is a good choice, I know it's harder to work with as it cab be grabby on tools/taps and sizing can be tricky.
Last edited: Feb 28, 2016

Pman, I always enjoy your new builds. I love copper, too. It's just got such a great thermal conduction. +rep.

Thanks gentlemen. It's so nice to get back to what we like doing with less drama. I really thought I was just going to make this a single 10440 build and use the other one for something else but this ended up being pretty unique as a dual stage unit.

Hi man,
awesome build kudos to you and good building karma. High power builds in that host are fantastic with results. i'm going to try again with a PLTB450B 2-cell and see what happens. Like your ingenuity and round about solutions, very savvy i must say..

Thanks Rich and Life Still had no issues with the switch during a lot of on/off time and it was on for close to 30 seconds once during the pic stuff. Crossing fingers.
PLTB450B is always a really good choice.

Love it Pman, dont know how else to say it as all the good comments have been said. I guess till I get one in my hand I won't know the true feeling of these little solid copper beautys:cryyy: Working on these I hope shows your feeling better "for the moment anyways" :shhh: Copper sure is one tricky metal to machine, the first few cuts seem smooth then bam its hot, grabby, and discolored wether in a machine shop or home tools. I start all these little projects but i'm thinking a host like this might be my next laser project though:thinking: 520nm or 450nm? but I do know I want at least 1W.
You must log in or register to reply here.
Share:
Facebook Twitter Reddit Pinterest Tumblr WhatsApp Email Link