Hey guys, just posted my first red build, and now it is time for the violet. This build consisted of a BDR-209 with the nano driver from DTR assembled in the Skyray host I purchased from Lifetime, who, by the way, was great to work with. He has some good hosts at really affordable prices, and is a very honorable dealer. Here's what the two hosts I bought from him looked like. It can also be seen on my other post for the red, which you can find here:
https://laserpointerforums.com/f50/...-stainless-steel-host-101666.html#post1501469

Anyways, this is what the two hosts look like. 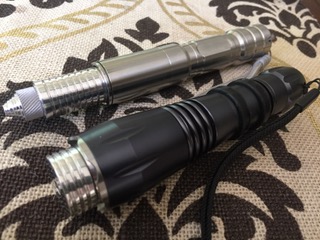 This one followed pretty much the same process as the Oclaro, I began by stripping the wires from both the host and the diode-driver assembly so they would fit neatly into the assembled host. 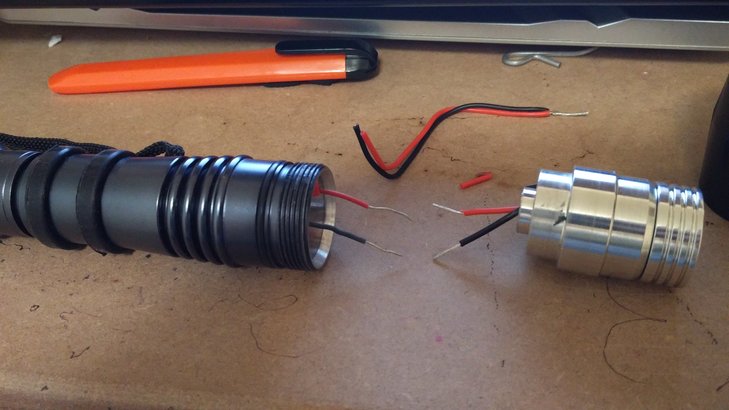 This was pretty simple, given that I had some experience after doing the red build, but it still scared me a bit nonetheless. The heatshrinking for this one was for some reason easier to me than it was when I assembled the red build in the stainless steel host. Not really much else to say here, it worked out pretty nicely and took a single 18650 battery. However, I should ask while I'm at it, if it's normal for the laser to look super dim when I'm looking at it myself, and not through a camera? Just looking at the brightness, it looked about as bright as a 5mW, but boy was it bright when looking through a camera. This isn't really a beamshot, but this is how it appears: 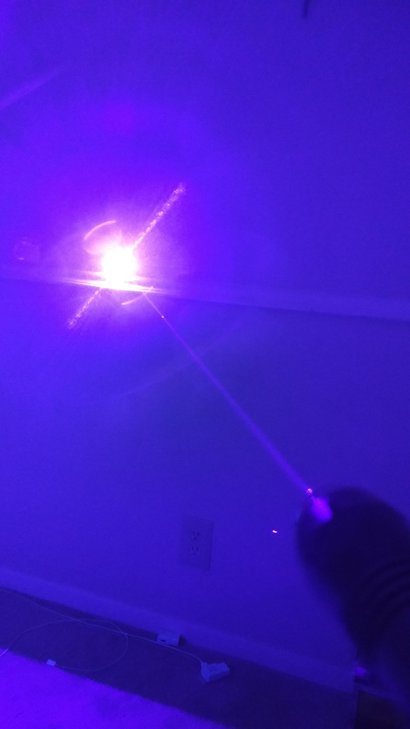 I know that it is sufficiently powered, as this laser lit a brand new candle rather quickly, but is it only so dim to my eyes because it's a violet diode? I know 405 is a bit off the area of high visibility, but does 40nm really make that much of a difference? Anyways, thanks for looking!

Yeah, 405nm is really not bright.
The PHR-803T diodes of days past were quite variable, though, and some were noticeably brighter than others at the same power output. I'm not sure how this diode varies but if you try a few, you may find one that is a little brighter.
P

Good to know! Thanks RA!

If you compare how bright different wavelengths appear to the eye with 532 nm green as a baseline comparison, at the same power output power level, this is roughly what you get:

Use this link to do your own comparisons: Relative Laser Beam Brightness Calculator: (532nm 1mw) vs. (405nm 1mw)

Hi ,
Another great build with the BDR 209 X16 405nm diode . yes they aren't that bright but when focused watch out those guys will burn anything in its path. These little suckers are burning maniacs i love em . I have one for sale in a full copper extended sink in a S4 host and it does 900+mW's /G2 lens.

I have been looking hard at lifetimes heat sink and I think I am going to have to commission one, maybe for that 505nm sharp DTR has, I wonder how hard I could drive it? 50-75mw would look great at night.

Hi Red,
I did the same but didn't use them yet i build and they just lay around , keeps me busy. I also bought these other hosts and did the same

These 405 nm laser diodes burn like the dickens, they are single mode laser diodes which can be focused down to a much smaller spot than multimode diodes, the shorter wavelength also allows a smaller point of focus. Just being near UV, I wouldn't risk looking at the spot close up for two reasons, one is the power is deceiving, they are putting out more than they appear, another is due to being near UV, I consider that toxic light due to the high levels of energy at that short of a wavelength.

Yes we must wear the laser safety glasses and be careful, that 405nm is a lot stronger than it looks, it puts the better part of a watt RMS into a very small spot, I love the " Little Giant " but it's got to be respected.

Lifetime17 said:
Hi Red,
I did the same but didn't use them yet i build and they just lay around , keeps me busy. I also bought these other hosts and did the same