Nice section addition; there have been a fair amount of lightsaber mods over the years, this will help keep them together for easier viewing and future reference.

I've always wanted to buy one of these and do a mod into a laser, but have never pulled the trigger ....yet!

Thank you, Avery. Can't have too many laser related topics here.

Wouldn't almost all laser pointers be considered a "light saber"? Even if they don't terminate

I like the category. .. however, personally I would have preferred to have a couple other things included like phasers and ray guns in this heading.

I can see some confusion looming its head.

DHL pulls into my driveway..
I sign for a big ass box that I have NO IDEA what or where ..Inside was a full size Sabre and THB I did not really know how well these are made-- REALLY FINE WORK.. not a toy. it IIRC was in the middle cost bracket from these makers at~$350. For a bit I thought it was the work of Madmomac.. he did stuff like that..Lives in Las Vegas so..-He said 'not me' then I got an Email fro Gray at Jetlasers.. seems a co-worker wanted one so bad he had it shipped to me for re-shipping to China..the place that makes these wont ship there.. I looked up the info--back then their best had 'lightsabre sounds' and 'authentic' too... actually made from SWs soundtrack. It was very bright light shade of blue. The light source was a string of very bright LEDs very lose together. You would not know that by looking. Oh yeah the $$$$$$ version.. Is designed to be 'USED' ....so very well made- unbreakable- afaik when they strike together the same sounds as in the movies. Came with batts ready to go.

kinda kewl
IMO it might be a good idea to include any builds made from 'toys' and other odd hosts.
.. and there are more than you think. Just Light Sabres has a somewhat limited scope.

Show us your 'Altoids' box build!!

At least twice I have seen at the forums lasers built into a 'zippo lighter' cases.

That toy gun for 50 cents sounds fine, but that same gun from 1993 for almost $50 is ridiculous. It is certainly not a collectible in that condition.

AND NO BOX.
IF it were a good collectible I would not be adding a laser.
That pic is from the ach bay listing .. mine has been
'played with' & it shows.
my best find was a SW fighter jet alarm clock w/ animated Jet.
has 3 LEDS which are lame.. so 'we be a-going' lasers. RRR G and V or B.

THAT took a while...my bad,,searched for 'SW fighter alarm clock '

It made #3 in one person's Top Ten 'Most Annoying Alarm Clocks'. It plays 'SW' theme..
I want all the original functions to still work. Xcept red LEDs
Dr Chuck gave me a bunch of red modules of 5 or 6 sizes.
Wireless RC would be nice but will settle for wired control of the lasers.

Under the fighter there is a 'jointed arm' that moves it about.
and IIRC makes sounds of weapons firing while the red LEDs light up.
woot!!!
Last edited: Jan 6, 2019
G

I believe I remember that module, Peter. Wasn't that the one that I sold you out of my stock? I remember shunting the tactile switch with a short piece of wire and adding the heat sink. You can't see the heat sink as it is on the other side of the driver board. I didn't know you had used it in a Phaser toy. Nice!

Why can't you take it outside anymore ? Need to paint the tip safety orange ?
G

paul1598419 said:
I believe I remember that module, Peter. Wasn't that the one that I sold you out of my stock? I remember shunting the tactile switch with a short piece of wire and adding the heat sink. You can't see the heat sink as it is on the other side of the driver board. I didn't know you had used it in a Phaser toy. Nice!
Click to expand...

Yup, I happened to be logging off and rushed the post.
It's the 200mw Aptlighingworld module you sold me and set up to it's best max. I think there was a fitting reason the driver's heatsink you added is the other side, can't remember.. you gave me the meter chart and I believe it was 192mw..

Red, even though it was all chrome before it still had a orange saftey cap at the front, I kept it and drilled a hole for the laser tip but when I put it on, it now it looks like a taser gun. and living in MA I just might need a carry permit even for a taser??

They had better not ever outlaw tasers because if I have to build my own it could be a heart stopper LOL I'm joking of course................It's a shame that you have to fear someone freaking out even with an orange tip but people often panic easily, it's not like the bad guys commit crimes with orange tips on their guns but unless your a little kid people may not even notice the tip, I was thinking about you taking it outside in your own backyard but I don't actually know if you live in a house, apt.. or other or how urban your environment is and you definitely want to avoid alarming anyone in public, but my backyard is not public although I wish it was a hell of a lot bigger, I really want some acreage and God willing my next home will be on some serious wooded property. Stay safe.
G

Just another post as to not high jack this thread.
Where I live now for the most part in high rise I wouldn't stand a chance outside and the police would be here in seconds with reports of "thugery".
At my home near Boston in a snotty suburb is a 50/50 chance.
My sister has a house in the Cape in a somewhat private lane and i'm pretty sure the neighbors would come and want to play with it, this is going on my experience from about 25 years ago when I must of bought $500 worth of fireworks for the 4th of July and the neighbors there matched me an more with a blazing fire works display.. Not one police car and it felt great and free.. If I even lit 1 fire cracker as a kid in the snot town I grew up as a kid the police would take all my fire crackers..
Neither place has a decent size back yard.

I'm also pretty sure if Avery were to play battle with light sabers with a friend or not they would think he a nut with a sword too.
Last edited: Jan 7, 2019

It looks like you're never too old to play with Lightsabers!
BTW, nice choice of wavelengths, Betty! 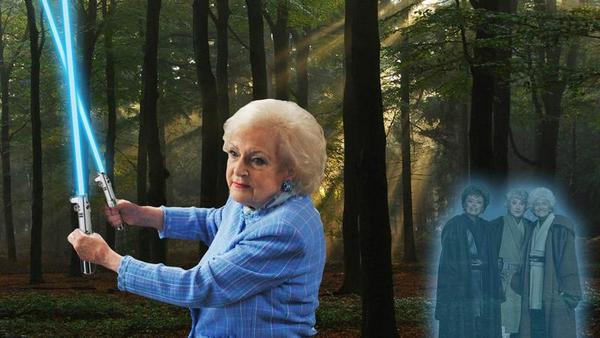 GSS said:
Yup, I happened to be logging off and rushed the post.
It's the 200mw Aptlighingworld module you sold me and set up to it's best max. I think there was a fitting reason the driver's heatsink you added is the other side, can't remember.. you gave me the meter chart and I believe it was 192mw..
Click to expand...