Will trade USD for a HR mirror tuned to 1319 nm while excluding the reflectance of other ND:YAG lines. Also interested in output couplers or any optics and or crystals made for 1319 nm. Any optics or parts for 589 nm, or other yellow wavelengths.

I don’t know if this will work or not but steve audi thought about putting a notch filter in the cavity to exclude say 1064. Might might not work.

Oh, a narrow notch-pass filter which can handle power would help. I ordered some “black doll” 1320 (1319) OC heads from COVID-China a few days ago, was thinking I can use them for each end of a rod, one for output and one for HR by putting another mirror behind it, it might attenuate 1064 and the other major line enough to work, Eskma wants $3600 just for a 1319 OC, that is an OMG price to me.

Alaskan said:
Will trade USD for a HR mirror tuned to 1319 nm while excluding or attenuating the reflectance of other ND:YAG lines. Also interested in output couplers or any optics and or crystals made for 1319 nm. Any optics or parts for 589 nm, or other yellow wavelengths also. 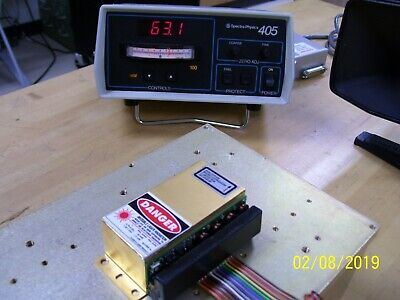 Up for quick sale is a Coherent 313M laser head and cable ONLY. The head was converted from fiber coupled to free space by Sam Goldwasser at Sam's Laser FAQ. The laser produces >60 mW @ 1319 nm Infrared!
www.ebay.com

another thought is a grating and use a ring cavity. Again just ideas none I’ve tried.

Thanks, I saw that but figured too risky, I want to pump some power and with a unit designed for such low output the optics may not be suitable. It is just I know nothing about it.

nah. The grating won’t work. Can’t see how you can use it to select both wavelengths to mix and output a signal. Unless they 589nm is formed on the surface of the grating and then gets reflected out the front. Oh well an ideas worth exactly nothing.

I have some yellow mirrors you can have. One set from HeNe OC/HR 594, and an SFPI set also 594. You would be on your own to identify which is which. They are in perfect condition, originally purchased from Sam G. You are welcome to them if you think you can use them. 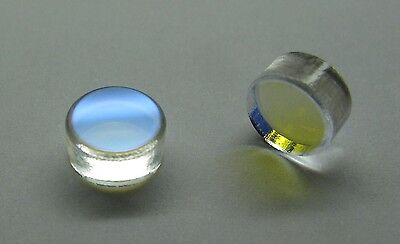 Most of these mirrors can also be used for other laser and optics applications. Or by using an aperture/pinhole to suppress higher order spatial modes, a very short SFPI could be built. These are new/NOS HeNe and Argon laser mirrors originally intended to be used in internal mirror laser tubes.
www.ebay.com

My friend, they are something I’d like to look into but not sure I could even use them. I bought a 1319 nm rod (with spare) I’d like to try to SUM together with a 1064 nm rod to produce yellow. The rods are doped for CW diode pumping and might be coated to be end pumped but are a bit long at 115 mm for that so thinking just to side pump them.

I’m wanting to produce a watt or more output. There are 500 mw yellow lab lasers on ebay, prob. the best way to go, but I’m being stubborn after that watt of 589 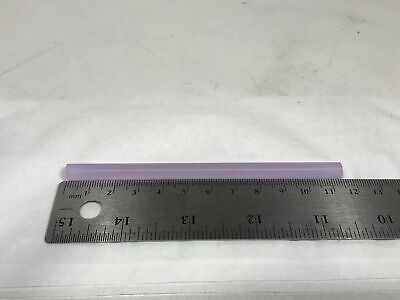 Synoptics Nd:YAG rod with paperwork made for Continuum. Manufacturer: Northrop Grumman. Dopant: Neodymium. The manufacturer of the complete system-level electronic product is responsible for complying with 21 CFR 1040.10 and 1040.11 and for providing the user with all necessary safety warnings...
www.ebay.com

The photo makes them apear to be doped for flashlamp pump intensities but the rods are actually white to the eye. These have been listed for a couple of years or more, so worked out a great price for multiples, ebay only shows the orig. listing prices, not what they sell for unless an auction.
Last edited: Oct 5, 2020

They probably appear white because of the type of lighting you’re under. Check them under the sunlight. Yeah it changes color depending on the surrounding light source that’s being used. Fluorescent lighting in particular is quite bad at making them show their color. And yes if it’s that big it would be flashlamp dopant levels.

YAGs that big are generally not that good for SHG. You would need an absolutely massive doubler to be able to handle that kind of light input, and that’s assuming you have a good beam geometry already.

as for mirrors how much are you willing to pay? good dielectrics that handle that kind of power are not cheap.

I have a massive doubler, several.

Yes, it is violet under sunlight.

The seller suggested, due to being multi-coat they are likely coated for 808 nm end pump and 1319 but the length is 115 mm. Wouldn’t it be nice if coated with more than two coats to support 1319 by letting the 1064 nm line out.

These were made by Northrop Grumman, as you prob. noticed in the ebay listing I linked to. 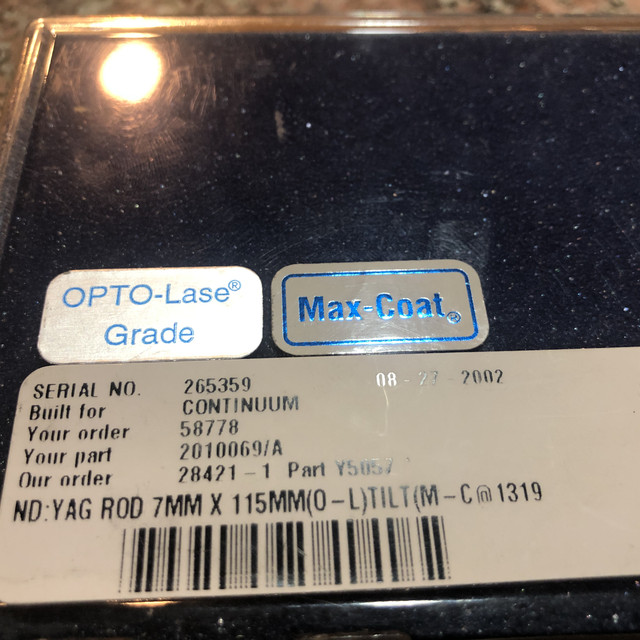 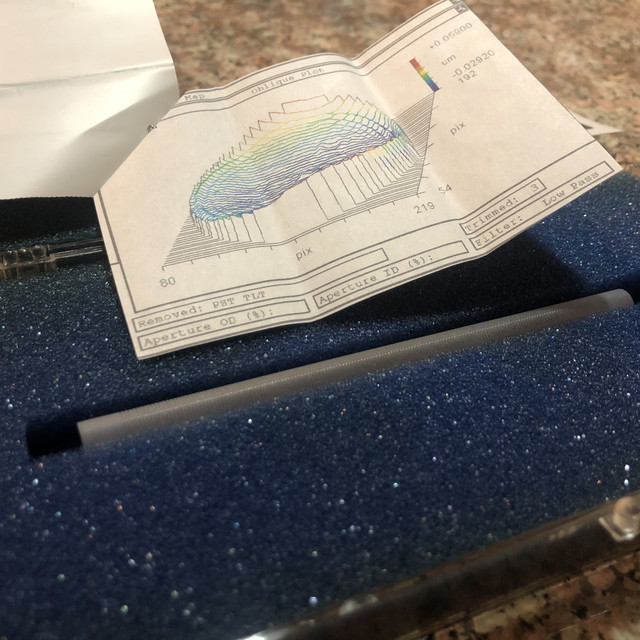 I suppose you could end pump something that large, but it’d be quite hard. I highly doubt it. Most of the time, rods are flash pumped. There are some little blocks that are side pumped by those diode bars though and those tend to be the best for what you’re trying to do. I’d be more inclined to believe that its dual coated to be able to do multiple output wavelengths. Stuff of that size is often made to generate several and then are separated by a filter at the end of the optic chain....usually in a handpiece for a medical device for example.

I have two dead 577 nm Coherent OPSL lasers. I have not looked into using the optics from one of those assuming they were not suitable. I need to research that, how can the optics from a 577 nm OPSL support this for external cavity Q switched SUM? perhaps a different config. would be needed for intracavity? I can imagine a way to insert the output from a ND:YAG at 1064 nm into the 1319 cavity.

I have some YAG 1319 black doll end optics from a Chinese laser on the way which were made for wavelength selectable, swappable hand piece ends. I don’t yet know what they are, a wavelength selectable OC or a combination of filter and 1319 OC.
Last edited: Oct 10, 2020

How'd you end up with two dead ones? ebay? are you sure they were dead?

As for the optics, I imagine they're coated perfect for this type of thing, presuming the peak power is low enough not to damage them. but a small yag block maybe a cm or so long would be great for this type of project. it could be side pumped and be very effective. especially if coated for the appropriate lines...and a small lbo cut appropriately too. maybe 5-10 or so mm deep. you could sort of re-create the opsl cavity as a yag cavity instead-it'd be a challenge though. I've not looked to see what the RoC on those mirrors is, but the coatings should be pretty good as long as you aren't utterly blasting the crap out of them. a 4" yag rod would demand a pretty resilient mirror, they usually have their own dedicated high power coatings for flash pumped stuff....but if you don't q switch it and do only a single lamp I could see them probably doing ok as long as the geometry of the laser cavity is good.

I've never tried end pumping a rod that long. I wouldn't think the light would make it all the way through before being absorbed with such a long travel path. I could see it being possible with yag if it's doped lightly enough. Ruby would be out of the question though.

If I were designing a cavity for something like this, I'd probably go for a small side pumped yag block on a big TEC cooling plate with a 40W diode doing the work. an flat HR at the back of it, and a concave OC at the front, and a temp. controlled 3x3x5mm LBO doubler on the other leg of the L fold and another HR behind it. it's a simple idea, but the execution would be fairly complex. but the setup would probably gives a couple watts of output if done right and run somewhat conservatively, and it'd have good scaling, and be relatively compact.

Well, then it appears I better flash pump this rod to make 1319 nm, by the color in sunlight, they look doped at the amount needed for a lamp. The multi coat must be for something other than end pumping, due to length and doping level.

I bought the bad OPSL blocks from a photonlexicon member a few weeks ago, he reported them bad:

BUYING Yellow laser or parts to build one

I've been collecting the parts to build a yellow laser and still looking for them. I want to build or buy something which puts out more than 100 milliwatts but would consider lower or higher power for the right price.
photonlexicon.com

Gotcha. Flashpumped stuff usually has a lighter dopant level, so they tend to be a faint pink, where as end pumped stuff is usually a darker pink. I have some end pumped yags that are angle cut on one end and a bit bigger around than my finger, and they're great for stuff like this.

A single small lamp probably would suffice for such a small rod if its in a decent cavity. Just keep in mind your heat dissipation for the rod. You could probably attempt an L fold with a 1319HR and the rod on one side, and the oc in the front, and the doubler and the yellow HR on the other side and see if you get a good cavity. It usually helps to do the math and planning on paper first to make sure your geometry is correct. You'll have to determine the curvature of the mirrors so you know how to space them optimally. that way you get a good cavity, and dont get any hot-spots.
You must log in or register to reply here.
Share:
Facebook Twitter Reddit Pinterest Tumblr WhatsApp Email Share Link