What kind of new laser toys or projects are you all working on?

What kind of new laser toys or projects are you all working on? Photo's? Show your toys. 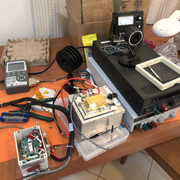 I really like using the C-lens pairs on my 5w+ builds and I had some heat sinks made by ThanhTung, I like the straight forward design and a good solid heat sink, these fit the 20mm DTR copper modules and the 3X beam expander fits the 25mm output hole but I also use a threaded adaptor plate made by Lifetime17, I drill and tap all my own mountings although I did just get a 4" slide vice for my drill press mostly for some personal gunsmith work but also will see if I can mill some small beds for my optics.

Find many great new & used options and get the best deals for Wilton 11694 4" Cross Slide Drill Press Vice at the best online prices at eBay! Free shipping for many products!
www.ebay.com

I need help and have most of the parts to make more than one. of EACH.>>> SO I hope someone will let me know if they are willing to follow thru-- make one for me as well as one for themselves...

IF I have already sent you some parts AND now you can no longer can help....please send the parts back asap .

I see that unit you paid $200 for on your bench/ living room table, Chris. I'm sure that will be interesting to work on. Let me know how it works out.
L

Nice to see you here again. I saw that you were away from LPF for half a year or so.

My principal toy for the last 6 months has been the setup combining a NUBM08 block from China with 2 Lasertack micro KE-setups on a 60mm Thorlabs cage. I had to buy and make in the local CNC workshop lots of pieces and this work progresses slowly.

The idea behind was to make an as perfect as posible single beam from a virgin NIchia block such as it was. RC was not optimistic about this way but I am trying to progress anyway. And yes, this double guide setup is very tight to properly adjust the mirror mounts but at the end it gives a kind of a 20x20mm square formed by beam pairs at 1m distance.
And these hungry beams try to carbonise everything on their way even when they are each 6x expanded and at only 0.5A current.

Later this square has to be vertically smashed by 2 vertical shift mirrors and 2 resulting 4-beam groups (left and righ) combined by PBS to form a single beam having 40-50W power.

I wish you good luck with your project LS and hope to see you posting a 50w blue beam.


Here's another project that I have set up on the bench top before without the final reduction and I want to build into a portable at some point to make a pretty decent point and use 20w beam, it uses 3X nubm44 modules with G2 primaries and 6X c-lens pairs, the 3 corrected beams then knife edged and run through a telescopic reducer.

I had set it up with the beams knifed edged wide to wide but I would like to build all 3 modules with c-lens pairs on plates attached by their edge so the beams will be rotated 90 degrees and knife edge the beams narrow to narrow like this > lll and then employ a reducer and if not a reducer then a beam expander.

Why do you need reducer here? It will make the final divergence as bad as of NUBM44s originally. To focus the beam, one convex is enough and to make a long range beam I would use Sanwu 3x BE (but stack expanded beams as triangle to better enter the aperture) - it can also focus at 5-10m but you know it well by yourself.
Also from my KE trials beams from NUBM44 burn much wilder if stacked as square (in 2 levels with 4mm offset) than in 1 level as ||||.

In my toy I use NUBM08 block because it is cheap and I will not cry if one day it burns in experiments. It will hardly make as much as 50W and the gballs are crap collimators (however someone like DTR could find one with all good gballs if he wanted) but after I manage to set up the whole framework and trail, the idea is to replace it by a block fom XJ-V2 with G-2 over each beam - this is expected to result in much better blue beam!
Also, if all mirrors are RGB, a NUGM block could be put in but sure only to get 8-10W of green at the end. I mean if NUGM01 are still around, but otherwise shaped NUGM03 blocks would also need a custom made HS.

Good to see you continue with this project LG, this will be a very nice unit, something I'd both love to see working as well as consider as a possible build too. RCB, Robert, very nice work on that, again, looking forward to seeing that one too and your drawing is eye candy.
S

I have enough SSY-1 ND:YAG units now (although want more for spare parts) to begin building a Gatling gun using several units, but I need a flash unit which will keep up with flashing several units in series, one at a time, but in fairly rapid succession. I see a lot of nice flash units for cameras which might work but there are no specifications regarding voltage and Joules to see if they will work. This one looks nice: 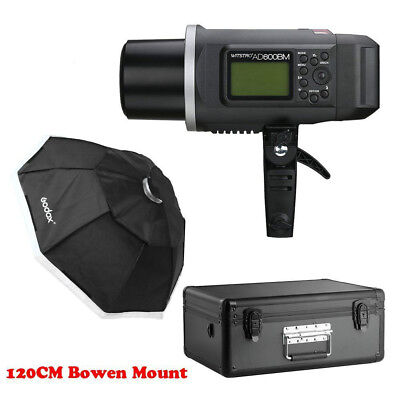 Edit: This Godox unit is rated at 600 watt seconds, I only need 15 watt seconds at a about 50-100 us flash duration (from what I'm reading on Sam's laser FAQ, 100 us better). The power output can be dialed down to about 12.5 Joules/watt seconds at the 1/32 power output setting, but the power settings are fairly sloppy, from what I've found in YT reviews, if you move one full stop, it might only move .6 stop, or some other inaccurate amount of power. I've since looked at the 400 watt version of this unit which is very similar, but has the same power output inaccuracies and is a bit smaller which isn't cheap either, but substantially less, and the AD200 which also has far more than the amount of power needed, and can be turned down to 1/128 of full output, so will work too, but the package size isn't ideal, what I liked about the AD400 and 600 is the large diameter of the tube chamber which I can build something to hold several SSY-1 YAG assemblies inside a tube that diameter to nicely fit inside the hood. Also, at the lower output setting, the AD400 is instantaneous flash, or no need to wait for the capacitors to recharge. Maybe the AD200 can do that too at the lower output setting, but the size turns me off.

My concern with using the AD400Pro model is one thing, I don't know if removing their flash tube, and adding a SSY-1 flash tube will cause a fault, due to the unexpected behavior of the smaller tube drawing far less power. That, and how to build something to sequentially shift the voltage from one SSY-1 to the other to reduce the duty cycle on each unit for continuous flashing at 1 Hz or less, if enough YAG units are used (I have a dozen). I suppose, something could be built with SCR devices, but I'm not yet clear on how to do so yet, anyone? Maybe making the high voltage DC output common on all tubes, but rotating the trigger voltage from tube to tube will work, or they will all flash if one is flashed, don't know. You can build your own flash circuit, pretty much just charging caps to dump into your xenon flash lamp but I think you want a long tubular flash lamp and a reflective cavity that you can cool if you want depending on repetition rate and heat build up.

Have you seen this > 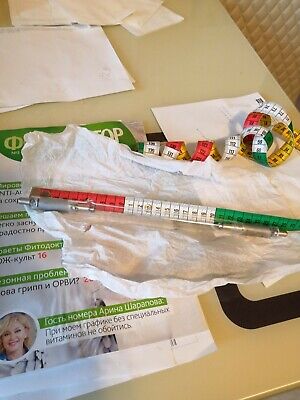 
I had thought about repackaging a Chinese tattoo laser with my own closed coolant loop to make it portable. This claims 600mj, what will your ssy1 output ? 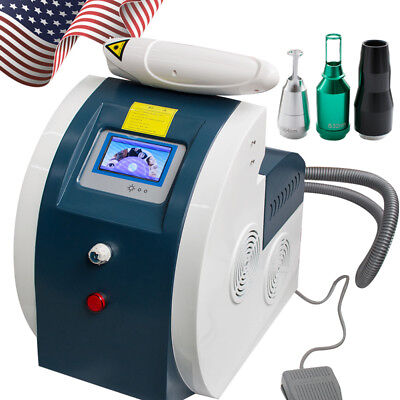 I just wanted to take a short cut and not have to build my own HV and triggering, these photo flash units have variable strobe flash duration and power, but from what I'm finding so far, they probably operate at just a few hundred volts, not 700 or more. The SSY-1 units have a flashlamp built into them which are 2.5 inches long and a little under .200 inches diameter. Arc length 1.38 inches.

Longer tubes can be used, but the arc length should be about 1.4 inches: https://www.mi-lasers.com/product/ssy-1-nd-yag-laser-flashlamp-2/
Last edited: Jul 5, 2019

Most recently, a friend gave me a pretty awesome gift. For a number of years, he ran a sound/lighting business in and around the town where we live. Circumstances necessitated selling off most of the equipment and finding another line of work. Of that equipment, he had a few 3W RGB scanners, one of which he held onto just for fun. He offered to drop it off as he was getting no use from it, and he figured I'd have a lot more fun with it given my fascination (read as obsession) with lasers.

So he drops off this big ol machine last weekend, and I spent a few hours going through the pre-programmed patterns. There was quite a bit of content, including one animation that had my wife and I laughing our asses off. 99% of the patterns were simply a few frames that repeat, maybe going on for 5 to 10 seconds. However, there was one in the "Dancing" section that was a 3 minute animation of strippers, with some rather graphic renditions of girl on girl kissing etc. Needless to say, there is a person somewhere in China that spent an inordinate amount of time making that animation, to which I say "Thanks for the laugh?".

It has been sitting in storage for quite some time though, and is in need of some TLC. It needs a thorough cleaning. The 20kpps galvos still work as they should. Blue and red both work as they should, but the 500mw 532nm module inside is going out, so projected content is overwhelmingly blue, pink, purple and red. Green is visible, but not very much.

So I got the enclosure cracked open a few days ago, and have been researching the various PCBs inside for more info. Would really like to swap the bulky, pricey green DPSS module out for maybe a NUGM02 or NUGM03 diode in a good sized actively cooled sink. The plus side here would be smaller sink, WAY smaller driver footprint, and considerably less expense than an identical replacement 532nm module.

I'm still researching parts, as well as trying to decide on a DAC so I can do some fun stuff with the machine. Torn between an Etherdream 2, laserdock (laserOS), or helios DAC. Have you guys seen some the stuff that's possible with these? My mind has been blown so many times in the last week while learning about them. Just search Laserdock on youtube, you won't be disappointed.

This reminds me of something I saw recently posted by an acquaintance (initials CRS) who some work I'm particularly fond of with 405nm and glow in the dark screens. Any connection?
S

Sumfinclever said:
This reminds me of something I saw recently posted by an acquaintance (initials CRS) who some work I'm particularly fond of with 405nm and glow in the dark screens. Any connection?
Click to expand...

swamidog said:
It's a different project, but I am CRS.
Click to expand...