Typical thing they do

I just found a listing for NUGM04 at 1.6 watts on aliexpress, so perhaps she is being honest, she was in the past. There are plenty of things on aliexpress I am interested in, but too many times the price they show on that site is a fraction of what they will really sell them for. I did order a couple of items through them a few years ago which turned out fine. Just hate wasting my time ordering, and then being told the price is really higher, so after a few go around's like that, gave up on aliexpress.

Perhaps her reluctance is due to how she is sourcing this part, no one else on ebay is selling it, and I have never seen a real data she for individuals diodes from these blocks, only for the block, if you can even find that.

Well alibaba and aliexpress are good websites. They're like ebay where sellers can sell their products. Alibaba is more for larger quantities and express is more so for smaller orders or individual sales. The sellers are what you got to worry about. The sites are just mediums for the sales.

Yes, it is usually the quantity thing which holds me up. Although about 6 years ago I bought a single item which was a 10 watt 532 nm green laser pointer through aliexpress for 350 dollars, such a deal! Except really 200 mw. The seller lied, so anymore I am wary of any seller on that site.

Her claim of 1.5 watts output does make sense if this diode is rated for 1.6 watts, her FAC lens (really, just a piece of glass fiber) does reduce the output about that much on the other FAC diodes I have ordered from her.

What was the company you bought from though? We should probably start an Aliexpress and Alibaba watchdog thread and list the sellers that we had issues with.

That was too long ago, I don't even have that account anymore. I was such a newbie to lasers, I believed such an outrageous claim of output power to begin with, the price alone was completely wrong, even if it were possible. The thread should indeed be renamed to include any source on the web.

Edit: Here's a spec sheet I found on aliexpress. Since these diodes are sold in a bank of 8, I doubt this is a genuine spec. sheet and instead, derived. 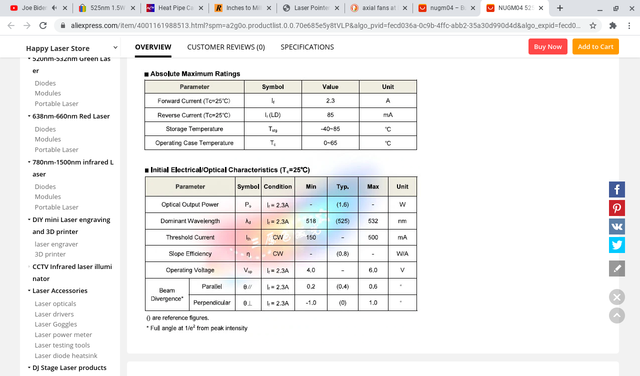 I have written Nichia asking if they make the NUGM04 array because I am not receiving answers to my question to this seller (twice now) regarding how high these diodes can be pushed beyond their rated power. If it is rated for 1.5 watts output, it should be able to produce several hundred milliwatts more, beyond the rated output if pushed harder.

I do not want to run it hot, just want to verify what I would be buying. I bought one to check, but it will be weeks before I receive it.

I wouldn't expect Nichia to get back to you. These are built for projector use and not for one off use. Nichia has always discouraged this kind of use of their products.

I didn't give them any reference to why I was asking. Also, used my company email address from a very large corporation. They answered me the last time I had a question.

I would suspect the engineers using these blocks already have the information you are asking for readily available to them. Unless the Nichia rep knows you I doubt you will get this kind of an answer about these blocks.

Debbie, an update: They answered as well as sent me a spec sheet. From the research I have done, I do not believe there is a NUGM04 block yet, my guess is these must be the diodes they are using but for some reason the ebay seller does not want to say:

The seller answered these can do 1.8 watts if over driven, I do not know what current they pushed them to for that, or how far below the knee. I will no longer post on this listing in this thread, as it turns out this listing is legit.
Last edited: Dec 8, 2020

Got some, testing soon 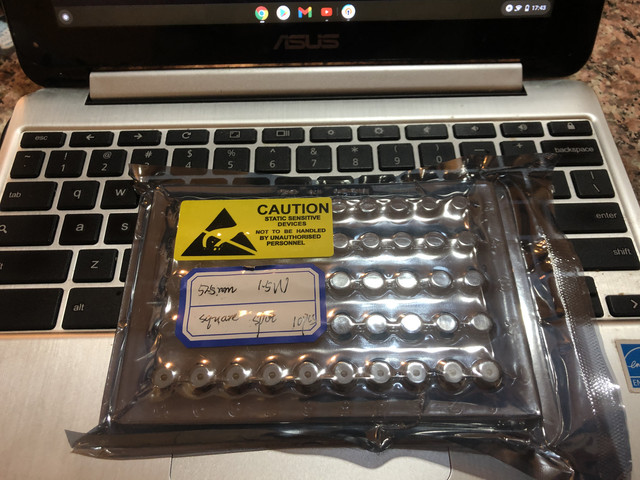 There is a NUGM04, This isn’t the diode I thought it was: 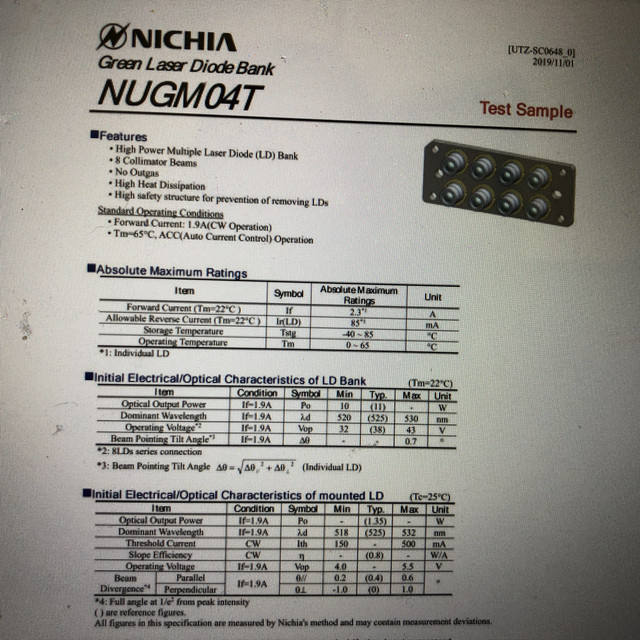 Alaskan said:
There is a NUGM04, This isn’t the diode I thought it was:

WOW, Is there A chance I Could get one from you?!!

I ordered ten for a project, need eight, two are spares. The package looks full, but it is only the bottom row. You can however reach out to the ebay seller and buy a single unit from them, I will PM you.

I just finished powering up this diode, the power is awesome, I will measure the power later when I get home, put this together during lunch at work, already had everything ready to pop the module in. Power out of a Techhood G8 lens (disappointed, is not 8 mm FL, closer to 5) is 1.6 watts when set to 2388 mA, so the 1.5 watt spec at 2.3 amps is probably what it does at that current. I didn't run the current through ranges yet, just set it there doing a power-on to measure current and then power off to do the adjustment each time, no way to know where it really ends up with much accuracy each time that way, but small movements so I didn't go too far. Will do so later.

Having arrived home and made a power measurement and trying to adjust the output higher, it appears 1.6 watts is about what to expect for max collimated output. So unless I am having a driver issue, I can't get much more out of this first diode. For a diode designed for 1.35 watts at 1.9 amps, 1.6 watts isn't too bad. My plan was to only use them up to 1.5 watts output at the max rated current of 2.3 amps.

Below, photo after power being readjusted, didn't adjust high enough to hit 1.6, but close enough. Only surprise is the divergence is shyt, about 9.13 mRad in one, 4.35 mRad in the other polarity, far worse than a NDG7475. While I am sure the FAC lens added helps a lot, that still isn't a square beam, not at 15 feet and certainly not at 100 feet. Uncollimated the beam appears square, but for some reason not when collimated, in addition to the FAC it needs 2 x expansion and a 5x beam expander minimum, IMHO. I tried it with a 10X expander tonight and then the beam then looks great, even without a 2x cylinder pair it is a nice narrow far reaching beam.

Although the beam characteristics are disappointing, even with a FAC installed, the power is not. For my application the wider divergence of both polarities won't matter, I intend on using a beam expander on it, had from the start before I found this. Wish for higher power green diodes? You can, for a price; higher divergence.

My thought is with this kind of power from one diode, wouldn't it be cool to make a pointer using two of these diodes through a PBS cube, cylinder pairs to correct the beam shape more and a 10X expander, then you would have something awesome. 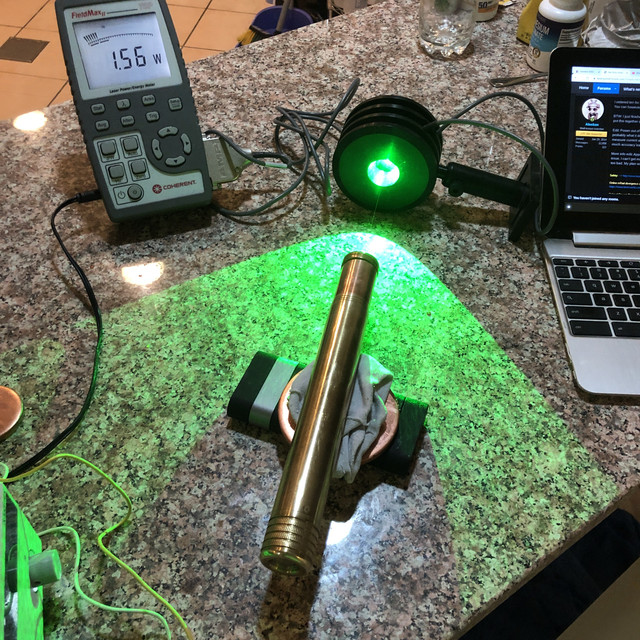 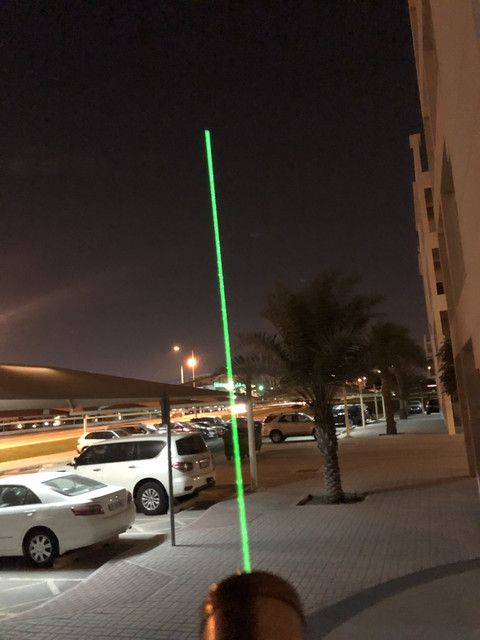 Re: Above photo, see that slightly larger appearing squared off tip at the end? That is because the divergence is too high (for what I like, being this is a toy without an application beyond fun, there is really no such thing as too high). Because of how far away it is, for what I want to see the beam should look more narrow at the tip, not flat, but is expanding far too fast to give that appearance. The tip is a big 2 x 1 rectangle at the end and at that distance is huge up there..
Last edited: Dec 22, 2020
You must log in or register to reply here.
Share:
Facebook Twitter Reddit Pinterest Tumblr WhatsApp Email Share Link