This is a minor update, no new major features, but there are some changes:

- You can now hold Q to snap the cursor to the nearest tip of any object. This is still a bit buggy if there are many potential snap points close by though, sorry!
- You can now hold Z to zoom in around the cursor for better precision drawing.
- You can now press F11 to toggle borderless fullscreen (stretched)
- Performance increases
- Better UI font rendering
- The full zipped version of laserboy is now included instead of a stripped down version
- Some enhancements to the manual
- Some bug fixes

Today it's Black Friday and you can get 20% off everything at our store including ildaGen! Use coupon "BITCOIN" in shopping cart before checking out.

In other news, the next update is well underway. I think you will like this one, I am working on two new major features, and a general better feel with UI tweaks and bug fixes. Still more work to do though, and also I got exams these days so I'm a bit busy. But I hope to release it in December.

New version today, 0.9.7, and I am pretty happy with this release! In addition to two new major features, I have done a lot of tweaking and bug fixing, and I dare say it's an overall solid improvement. Also it looks a bit better with a new layout.

- Arbitrary function modes for shape, coloring and blanking
You can now write your own mathematical functions to describe the objects in the ILDA file. I haven't used it so I'm not sure, but I believe this is kind of similar to some of LSX's features. It's potentially a very powerful tool, but it might take some studying and getting used to.

- Better object manipulation tool with rotation, scaling and displacement
This is a big improvement over the earlier slider-based movement tool. You can now move, scale and rotate selected objects super intuitively by just clicking and dragging them with the cursor. You can also manually set the anchor point for rotation and scaling, meaning the manipulations doesn't necessarily have to be symmetrical and uniform.

- Simple scanner optimization at export, right click on the export button to choose between minimized and optimized output. This is very basic though, it is still recommended to run the files through something with better post-processing if your DAC/show software doesn't do it automatically.

Take a look at the updated screenshot in the first post of the thread for a quick look!

I just released a new minor version. Sorry for the maybe overly frequent updates, but there's always some dumb bugs that pop up that I want get sorted out sooner rather than later. Other than bug fixes I added a small new feature, Copy/paste. When you have selected an object, you can now use Ctrl+C to copy, Ctrl+X to cut and Ctrl+V to paste objects on the same frame or to a different frame.

I am starting to run out of ideas besides the long-term plans, so if anyone have any more feature requests, please let me know!!

New version today, v0.9.7.2. Another relatively minor update. Much of my work since the last release have been in features that didn't make this release, but there are some new stuff.

The biggest change is that you can now save and load your ildaGen projects in a dedicated file format (.igf = IldaGen Frames) so that you can continue your work at a later time if you are making something that takes a lot of time. All information about separate objects and such are kept, in contrast to a regular export to ILDA. igf files are associated with ildagen when using the installer, so that you can just double click the files to open them firectly instead of opening ildagen itself and then clicking "load". Same goes for ilda files (but automatic file associations are not created).

You can now copy and paste whole objects spanning several frames instead of just one frame at a time.

I just released version 0.9.9, one of two releases since the last time I posted in this thread. They are not huge releases, but if you have not updated yet, I very much recommend it. The program is getting more and more solid, with many bug fixes and small tweaks. There are also a few new features, such as more animation modes, the ability to easily repeat animations x times and somewhat better scanner optimization.

You may also notice some buttons referencing a timeline mode, which is not active yet. This is the reason the updates in the last few months have been relatively minor, I have mostly been working on the timeline mode behind the scenes. Soon, you will be able to create full-length shows in ildaGen, with layers and music, not just snippets!

Also, I have submitted ildaGen and Vrilda to the ILDA Fenning awards. Here goes nothing!

New version today. Please note that the program have changed name, from ildaGen to LasershowGen. I should have realized sooner that I'm not actually allowed to use the name ILDA in my product, which I was informed of when I submitted the program to the ILDA awards. Sorry about that! The new name, (though admittedly bland, I didn't have that much time to think of a new one ) probably fits a bit better too as I hope to make the program a full laser show solution some time, not just an ILDA file creator.

NB: Please uninstall the last version of ildaGen before installing LasershowGen to avoid multiple instances of the program on your computer.

New features in this version:

- Symbol tool, based on Hershey fonts. You can insert lots of different symbols including western, greek, cyrillic and japanese glyphs, and also math, weather, music notation etc. See the screenshot below for some examples.

- You can now select and manipulate multiple objects at once. Note that you need to use CTRL + click to select, the up/down arrow keys no longer work.

- Better updater, from now on the program will automatically download and launch the installer for the next version when it is released (if you want it to), so you don't have to manually download. 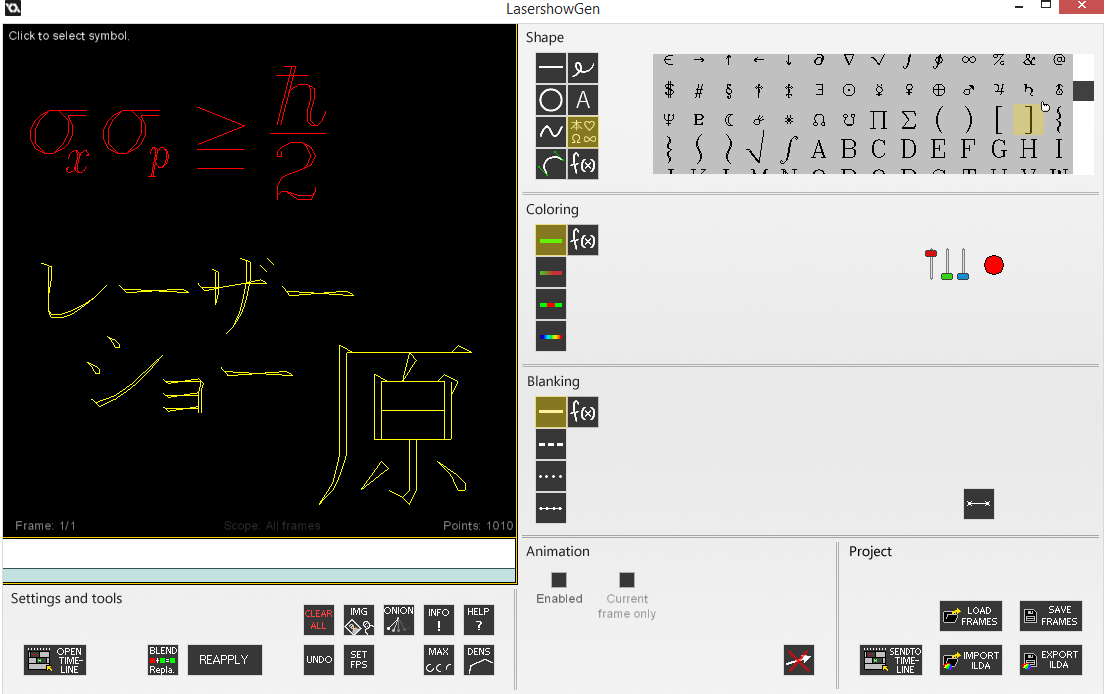 New version today, and this is the biggest update since the release of the program!

Introducing the timeline mode, you can now create much more complex and long ILDA files by combining several objects, either ILDA files made in the editor mode (what used to be the whole program) or ILDA files imported from third parties. You can also load music to sync your show to, with detailed visualization using both volume and frequency.

Unfortunately the timeline mode is not yet available in web version, but that might change in the future.

Also, in the editor mode, I have added a proper blend mode selector to blanking when reapplying, so you can create much more complex blanking patterns on your frames.

I've also added a top menu which now contains a lot of the options that used to be their own buttons.

As always, please share feedback and bug reports, I really appreciate it.

Here's a screenshot of the new timeline mode: 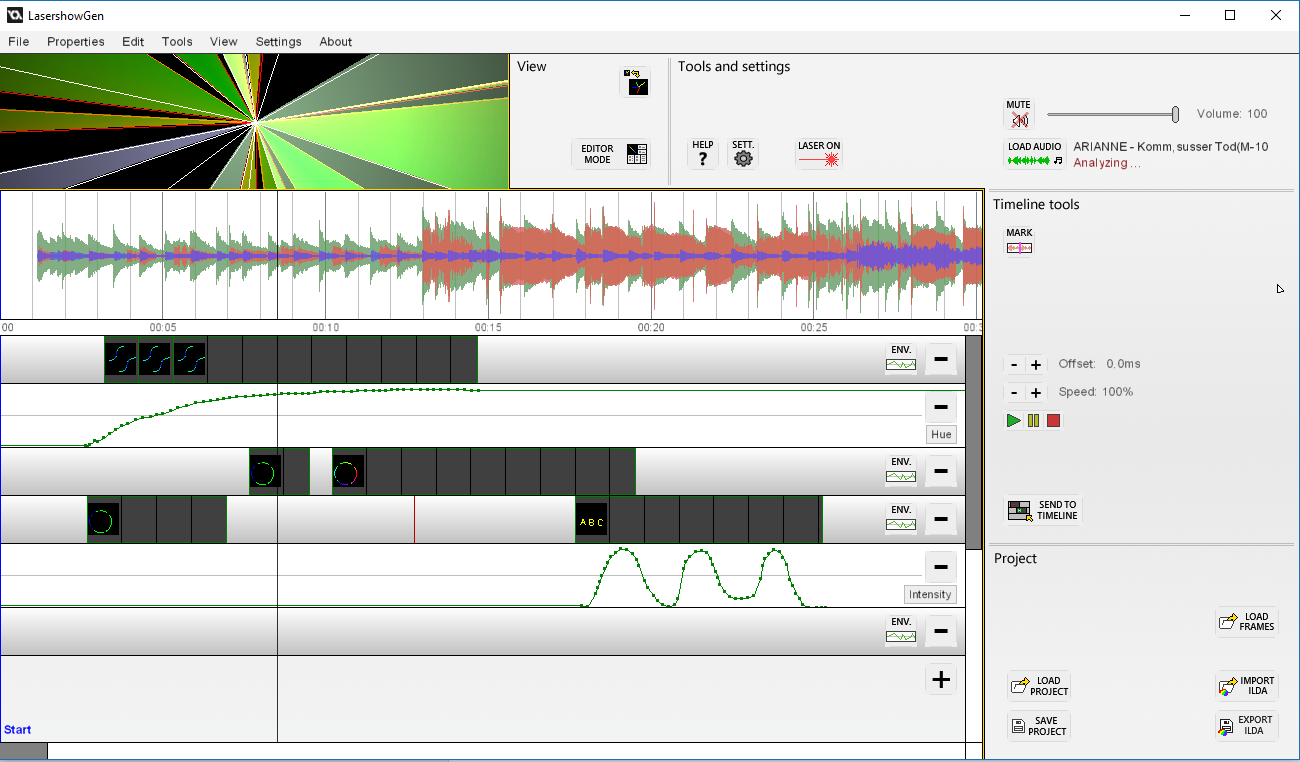 i cant believe i almost got it for free when this came out. so lucky to be a customer of yours

The largest new feature are envelopes in the timeline mode. They are effect automation layers, if you have used some video editing software like Sony Vegas you are probably familiar with the concept. Basically you can vary some property of the laser projection freely by drawing a graph describing the change of the property over time. For example you can create an envelope for intensity, and draw a little slope at the start or end of an object on the timeline, and you'll have created a fade in/out effect. Other properties you can edit in an envelope layer include displacement on both axes, color hue, individual red, green and blue color channels. More, like size and rotation are of course planned in the future.
I think this is a really useful feature, it makes a lot of fancy effects not only possible but easy to make.

For the next few versions I will work a bit on the frame editor mode, for example I want to make it possible to split and combine objects at arbitrary positions. This would make some cool effects possible, like a figure breaking apart into small pieces. Also I'm planning support for legacy .ild version for those with SD card readers that don't support version 5.

Also I think I am getting closer to the point where I can try taking the biggest step so far: adding support for actual laser playback through DACs. If so, which DACs would you like to see support for first? Is the new ILDA digital network protocol something to focus on as well? I was thinking I would maybe use DrLava's "all-in-one" DAC library, but it is not royalty free AFAIK and the focus on LasershowGen is low cost, so I'd have to work out a good deal. Also that library is not cross-platform. That's another thing I haven't mentioned, I've been slowly stripping away platform-dependent stuff from the program, so soon I might be able to release a client for Mac and Linux too.

It has preliminary support for output to DACs. But it's a bit meager still, only RIYA is supported as of now, and only one DAC at a time.