How to solder properly

I use rosin core made in australia and a butane weller adjustable, but it use's a chisel tip is that ok?

Ieon said:
I use rosin core made in australia and a butane weller adjustable, but it use's a chisel tip is that ok?
Click to expand...

As long as your tip "fits" into the spaces you have available, it doesn't matter. If it is too big or wide, then it will cause you problems. Remember, the pins on the back of the diode are less than 2mm apart.

Ieon said:
I use rosin core made in australia and a butane weller adjustable, but it use's a chisel tip is that ok?
Click to expand...

Razako said:
One important thing is that you MUST have a good soldering iron with adjustable temperature. I absolutely hate trying to solder sensitive components with one of those $6 cheapo irons from radioshack.

Now I have a decent soldering station and it works much better.
Click to expand...

I agree with Razako, a temperature controlled soldering iron is key and super helpful.

i just googled my iron that i got for my bday its worth 285$$$ yaya.
its temp control and has a sponge.it is an essential for all laserists. i also like a solder caddy and helping hands WITH magnifing glass.
if i could rep you i would give you a +. maybe sticky this??
cheers
H

When soldering in a diode also make sure that you heat the part as minimally as possible. Some such as C-mounts and long OC reds will be destroyed with relatively little dwell time with the iron. The key to soldering these beasties in is HOT and FAST with a tinned part, and a CLEAN tip. I cannot emphasize how important a clean tip really is! A temperature controlled soldering iron is nice, but too low is worse that too hot. You will know what too hot is, because your rosin will burn up and your glob will get crusty almost instantly.

Get yourself a good iron, YES, they are worth the cash! I like weller, and ungar. Get a 15 to 25W, less is too low for all but SMD, more is too much for most electronic jobs. I do not recommend a $6 POS radioshack, of fleamarket special- they die too quick, and often fail with the tip near line potential.

Also get good solder such as kestler 63/37 tin lead eutectic; just look for the 63/37. yeah it's got lead, but sometimes the good old stuff is the best, nothing is stronger and more versitile. Avoid tin antimony solders- too HOT, and don't bond small parts good. Some laser electronics use indium based solders, if you are using lead based solder be sure to remove as much indium solder as possible from the diode etc BEFORE soldering or else you are asking for trouble. It makes a quaternity eutectic that crystallizes and creates a cold solder joint no matter how good you are. The bond is so bad that you can use the mixture as a chip removal aid for SMD repair! You can literally pop the part off with your fingernail- THAT BAD!

Put a blob on the pads of the driver first. Also be sure to solder the side of the LD with the most metal in the circuit first. Make sure that your iron is grounded and that all workpieces are grounded too, as it only takes as little as 7V reverse to kill an expensive laser diode, with the longer the wavelength the easier the kill is, some like the 1.5um IR diodes can die with as little as 2V the wrong way.

Practice on other stuff first, start by using cheap parts from a grab bag box such as the one from the "electric goldmine". You can use cheap blue LED's to mimic violet laser diodes in circuits of low power.

I don't know if this was mentioned but...

DO NOT flick your iron to get excess solde3r off the tip. Always use a wet sponge.
Do you really want 500 degree lobs of tin flying around? It will stick to your skin and you will get a burn.

LazyBeam said:
I don't know if this was mentioned but...

DO NOT flick your iron to get excess solde3r off the tip. Always use a wet sponge.
Do you really want 500 degree lobs of tin flying around? It will stick to your skin and you will get a burn.
Click to expand...

That goes for flamming marshmellows too. Sorry to be off-topic, but my little boy discovered that last night:crackup:

Any tips on how to re-tin or refurbish a tip properly? I have this Kester tip tinner stuff but it seems like it's no longer working on an older tip . . .

I see conflicting info about not using a file/sand paper etc . . . 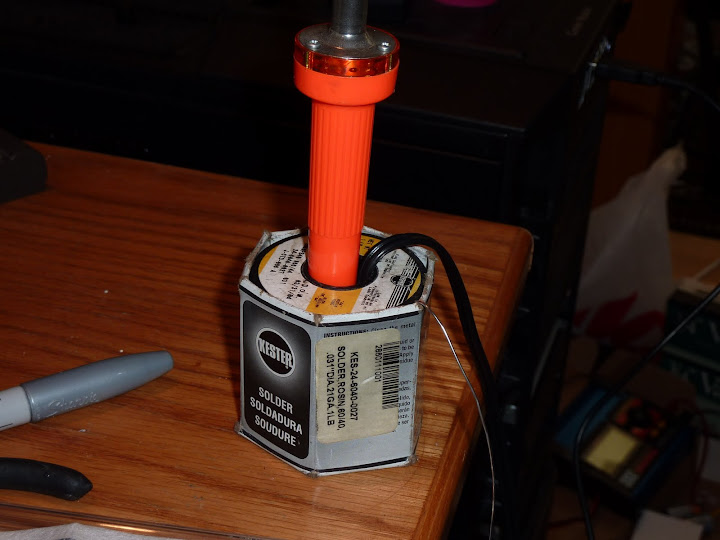