This is a review for a 488nm 100mw Sanwu guardian laser pointer with a 3x beam expander.

This is the first high-end pointer I've owned and I have to say that I am exceedingly impressed with it. Back in the 1990s I was a laser technician in the military, and we didn't have anything as cool as this. Our neatest lasers were super powerful neodymium yag, used, if I remember correctly, in the rangefinder of the M1A1 Abrams tank. As technicians we weren't allowed to play around with the tanks very much, but they were a lot of fun. The infrared night-vision in them is sensitive enough to see hot water pipes through a steel or concrete wall!

This Sanwu guardian seems to be extremely well-made. I was a little disappointed that the bag it came in said that it was 80mw instead of 100mw, as I'll mostly be using this outside in bright daylight: The other 20mw would have been useful. However Podo explained in an email that to push it any higher would have changed its wavelength closer to 492nm, which I didn't want.

445nm blue laser beams are generally harder to see with the naked eye and thus need to be more powerful in order to be clearly visible. I wanted something bright and easy to see that didn't need to be super high-powered and this pointer fits that bill perfectly.

The beam expander is really, really cool. I haven't played with optics much in the 20 or so years since I've gotten out of the military, and this beam expander brings back a lot of memories. It seems to be a quality piece of gear, and I find myself like a kid with a new toy, looking at the beam with and then without the expander attached, over and over.

I buy a lot of gear online, and I tend to get the best stuff that I can afford. My friends sometimes joke that I'm like a "high-tech homeless person" because I'm almost always outside and all of my stuff is portable, battery powered, waterproof, and so on. I get all kinds of gadgets and gizmos and things that light up, but this laser/beam expander combo is actually one of the coolest things that I've ever bought in my life. The color is breathtaking.

So I don't really care that it's a little less powerful than I'd wanted, and while I realize that other people have already reviewed this wavelength and power in a guardian host, I'm primarily posting this review to show people what the beam looks like with and without the expander attached.

Without the expander, there is a little bit of a blue spill off to one side of the laser's dot, however with the expander attached this spill disappears completely. The expander also adds the ability to focus the beam from up close to a tremendously long length.

The drawback to using the expander is that it makes the beam less dense and thus harder to see, especially with a comparably low-powered laser like this. I was concerned that the expander would make this pointer's beam too translucent to be seen at night with the naked eye, however this fear turned out to be unjustified. 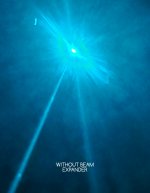 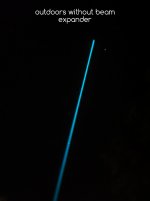 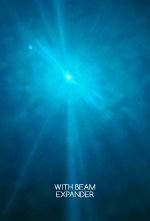 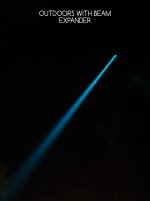 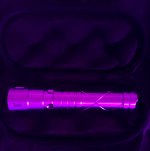 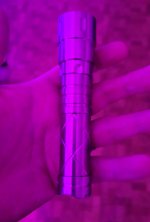 So far I've seen absolutely nothing about this pointer that I would call a negative. Personally, I would rather have a laser that needs the button physically held down in order to be on instead of an on/off switch, as the on/off switch makes a laser more dangerous when dropped. However this is a very minor point that should not be an issue as long as proper laser safety is followed, and I'm probably in the vast minority of people who would be interested in something like that on a high-end laser like this.

To wrap up, the beam without the expander attached looks great. The beam with the expander attached is not going to wow any experienced laser-heads like a multi-watt pointer would, but it does fine impressing my friends. I would like to see one of these with 200mw of power, but this is just bright enough during the day to be functional for what I need it for so I'm not complaining. I definitely recommend buying an expander, especially if you get a non-focusable pointer.

I'll also note that this dot looks very boring in the pics. In person it is bright, sparkling and beautiful beyond words. I'll say again that this is one of the coolest things I've ever owned.

Will update this review if it falls apart quickly or something like that but I doubt very much that it will. The guardian host was obviously designed for a much more powerful laser than this so overheating really should not be a problem unless it's mistreated. The stainless steel seems extremely durable.

Nice review dreaming.
Yes, Podo is spot on about the wavelength shift. A sacrifice in power output will have saved the laser drifting away from 488nm. Thermal and current setting can alter wavelength.

EDIT- literally an hour after I posted this my roommate opened my bedroom door and tossed me a FedEx package with my lasers inside. Lol. Now just waiting on the batteries to show up.

EDIT- literally an hour after I posted this my roommate opened my bedroom door and tossed me a FedEx package with my lasers inside. Lol. Now just waiting on the batteries to show up.
Click to expand...

488nm is so sparkley for a blue, it looks like a light coming up from a beautiful swimming pool in my opinion. Very satisfying.

dreaming said:
488nm is so sparkley for a blue, it looks like a light coming up from a beautiful swimming pool in my opinion. Very satisfying.
Click to expand...

Of all of the commonly-available laser wavelengths, 488nm is my favourite one.

dreaming said:
488nm is so sparkley for a blue, it looks like a light coming up from a beautiful swimming pool in my opinion. Very satisfying.
Click to expand...