conceptcar3 said:
However! I improvised a very ridiculous albeit effective solution! Using a cardboard paper towel roll, and a 3.5 diopter convex cylindrical lens (from an optometrist kit) on a specific angle, I was able to somewhat collimate the green beam into the red and blue which were already well aligned. Here are some more pictures!
Click to expand...

DIY for the win

Pretty good/nice results for the price paid for that RGB.

It arrived very quickly as well.

Now what we’ve all been waiting for

And a couple from my wife’s iPhone 11 pro

conceptcar3 said:
Well, a little disappointing in that the green laser is completely misaligned from the red and the blue which are aligned quite well! Here are some pics.
Click to expand...

The alignment should be better than completely misaligned. Maybe in shipping it got bumped around a bit which caused the alignment to be out of wack. Can you email the seller, tell them about the problem. Ask if you can realign it yourself and get instructions to align it better and if not, should/can you return it for replacement with a better example?
They probably will help you with a guide of some sort on doing the alignment.I mean I believe they make/manufacture the thing they have to know how to do it. Will probably help you and offer to give you a partial refund rather than have you return it--who knows is worth a try.

Can you open it and see if possible to tinker and realign--should be possible to do without a lot of trouble ?

In the video of one--alignment was not absolute perfection but pretty good/decent. Yours should be the same--- not completely misaligned.

I did do that... they told me that the device is brand new and that I shouldn’t expect 100% perfect, that it could not be opened and adjusted and that every unit is misaligned like that. I said the same thing, that I expected it was bumped during shipping because green laser was way off- they said no that is how every unit is. They offered to sell me another one for $80, but said that it would be exactly like this, he confirmed with both the tech team and his supervisor (supposedly). I didn’t order the 2nd one. Lol. I noticed in the video, the laser is very close to the wall where the dot is shown. When it was misaligned, if I held it very close to the wall, and took a picture of the dot, it would appear white or yellow, but to the eye it was clearly not.
C

Of note- red and blue were aligned almost perfectly. I told the seller they needed to remarket it as a 4 color laser because it can only do red, green, blue, and purple. It could not do white, light blue, or yellow because of the terrible misalignment. They disagreed with my assessment. But these pictures show the terrible alignment of the green laser.

conceptcar3 said:
Of note- red and blue were aligned almost perfectly. I told the seller they needed to remarket it as a 4 color laser because it can only do red, green, blue, and purple. It could not do white, light blue, or yellow because of the terrible misalignment. They disagreed with my assessment. But these pictures show the terrible alignment of the green laser.
Click to expand...

You did everything you can do. Is unfortunate that the maker/seller says it can't be adjusted any better.

At least you didnt get hit for $299 + shipping from a reseller.

I would either ask to return it for a refund or ask for a partial refund to make it's cost the $80 as they probably would not refund any shipping and between shipping to you and shipping back to them it would be $80 anyway.
You could use as is or open it up and see if it can be tweaked or find a way to mod it for better alignment even though the company said no. Maybe it is that they just don't want to bother--who knows-- that is very typical of Chinese low cost laser companies ---once they have your money they don't care--the money is the only point they are interested in and often misrepresent products and so on?

Good photos --the cardboard tube fix that shouldn't have to be done was a very creative/inspired fix
Last edited: Aug 13, 2020
T 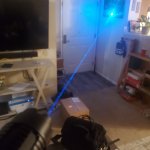 mine does light blue perfectly. Its just the red that bleeds a line