This pics were taken the last week of August. I used a bunch of glass spheres and also hung some "strings" of hematite magnetic balls from above and that is where I started. For the first ones I used 589s and a 488. I then set up a twelve frequency rainbow consisting of:
405, 460, 473, 488, 495, 505, 520, 532, 589, 593.5, 635, & 650nm. Trying to keep that many lasers where the beams are parallel to each other is a good amount of work and a pain in the rear. Plus not all of the lasers are exposed for the same amount of time to balance them , and for the 495, the power switch has to be held down. But since the photos came out how I intended it was worth the effort. For me, I like to use the hematite as the reflections and distortions of a straight line on shiny metal can be as nice as using various glass shapes. On some of them the shading on the magnetic balls came out very subtle, but I think they really add to the photographs. The last pics I tried having the lasers oriented horizontal with all of the beams going into one mirror and bouncing off. Some nice ones in this batch, enjoy. 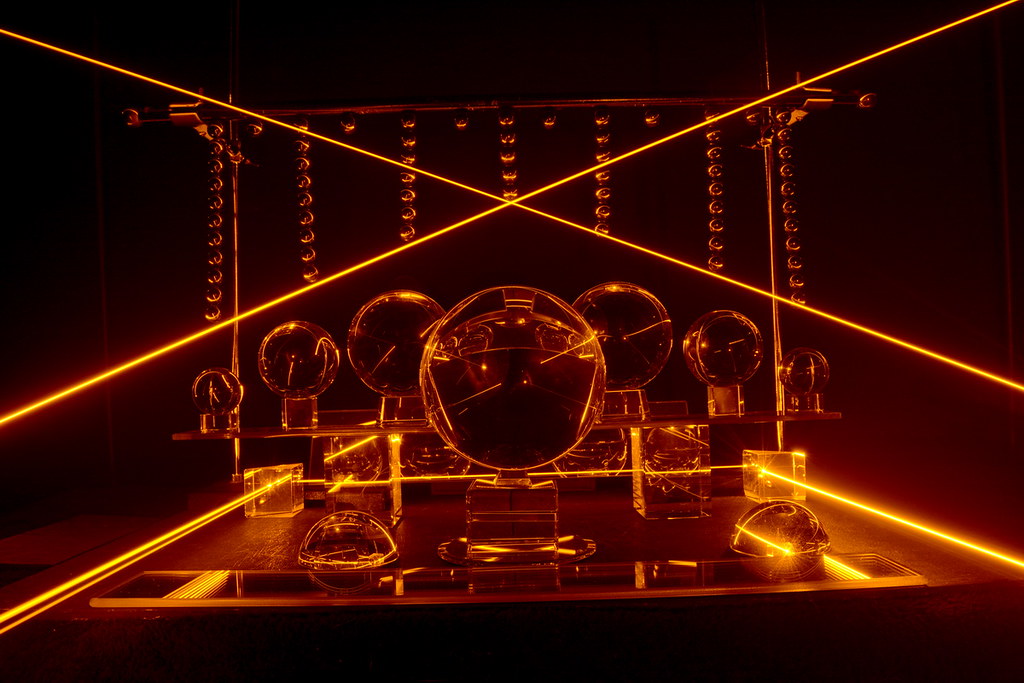 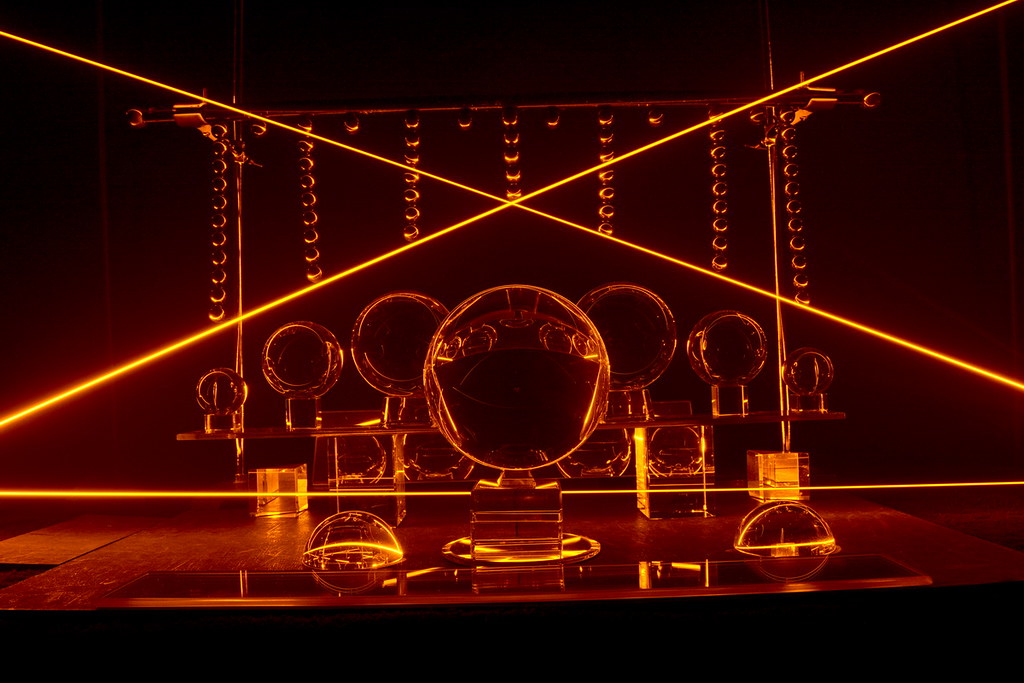 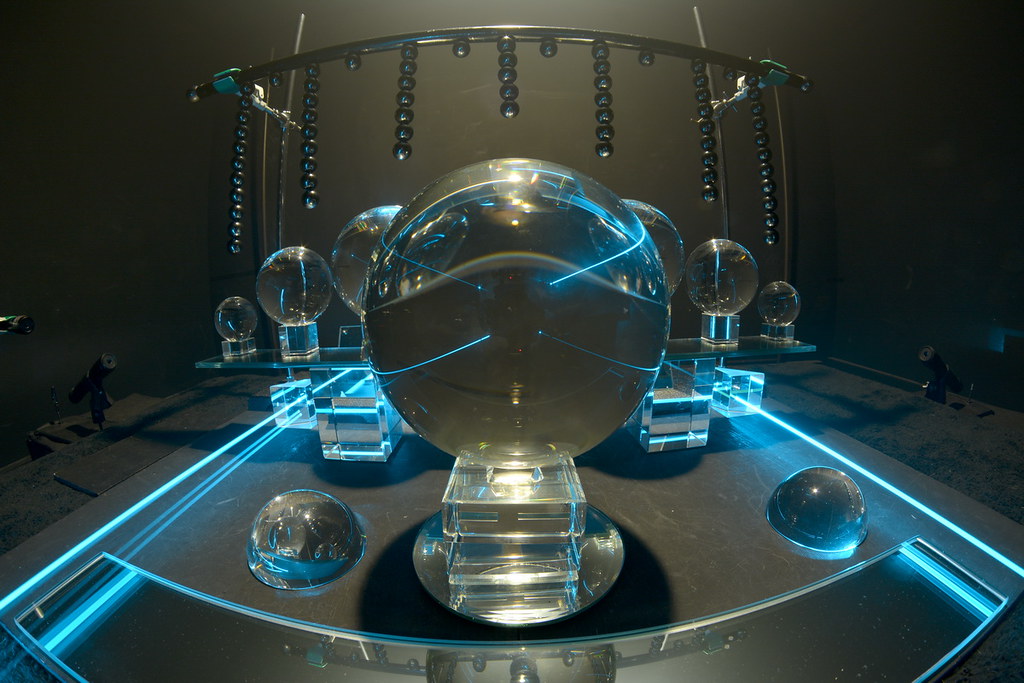 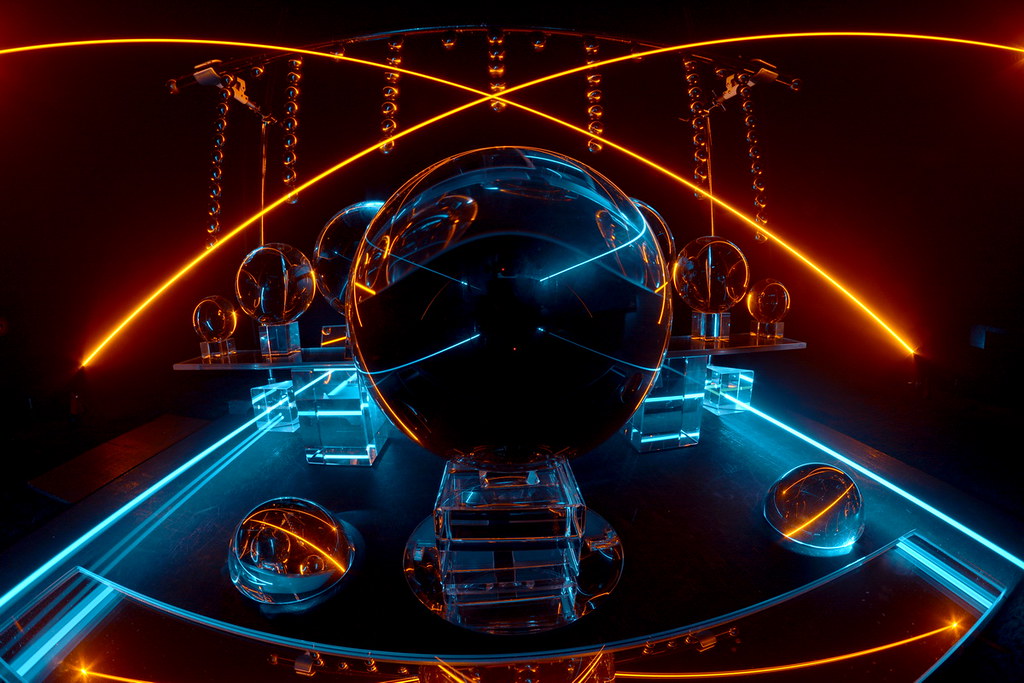 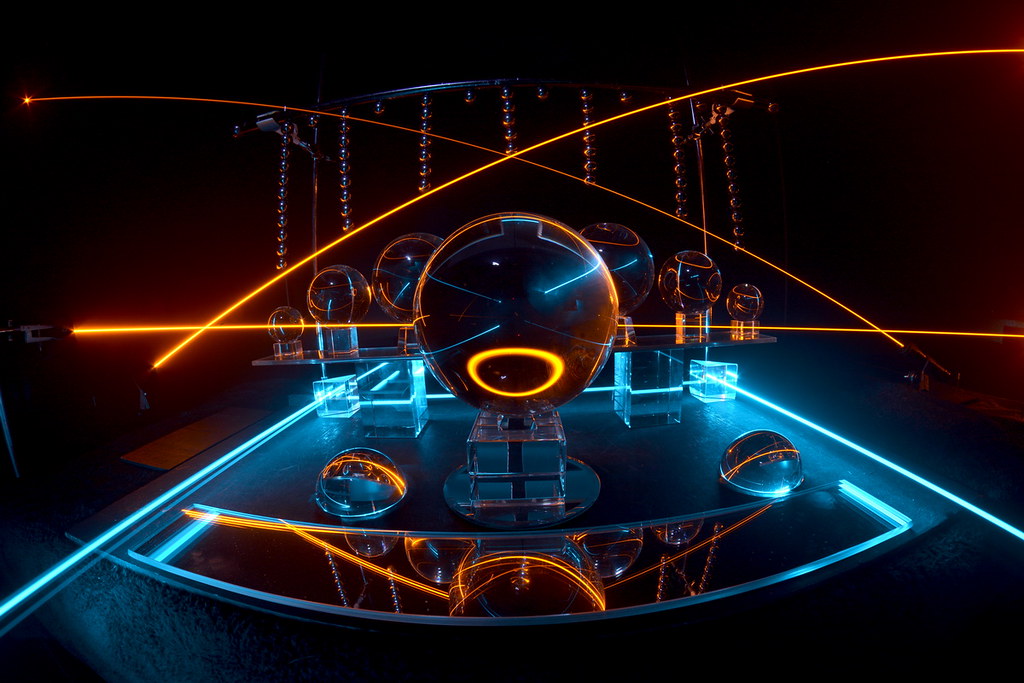 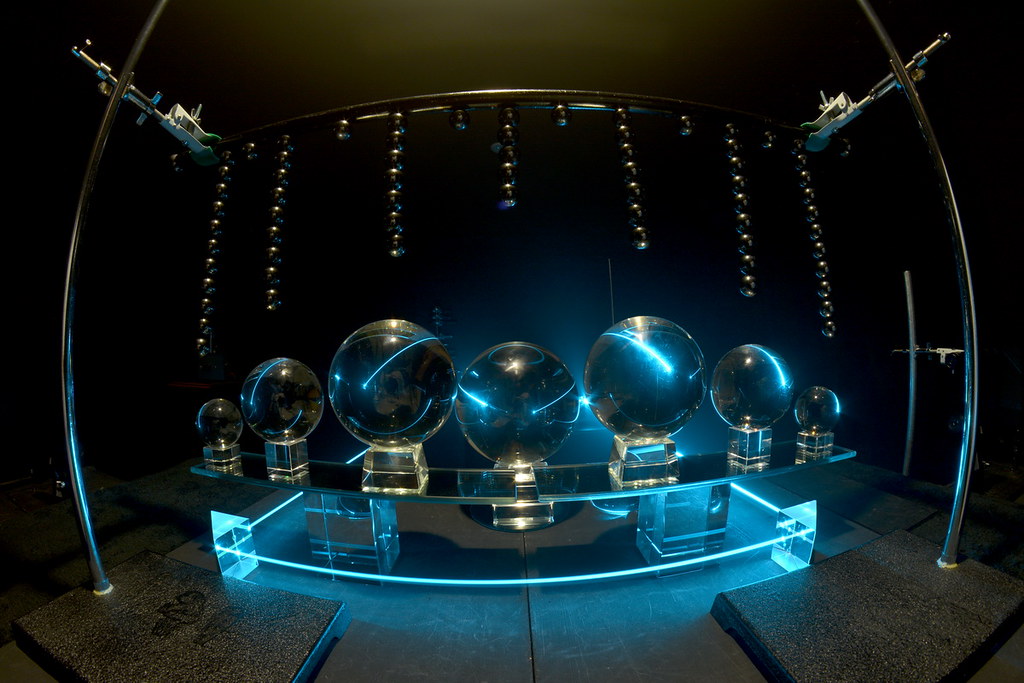 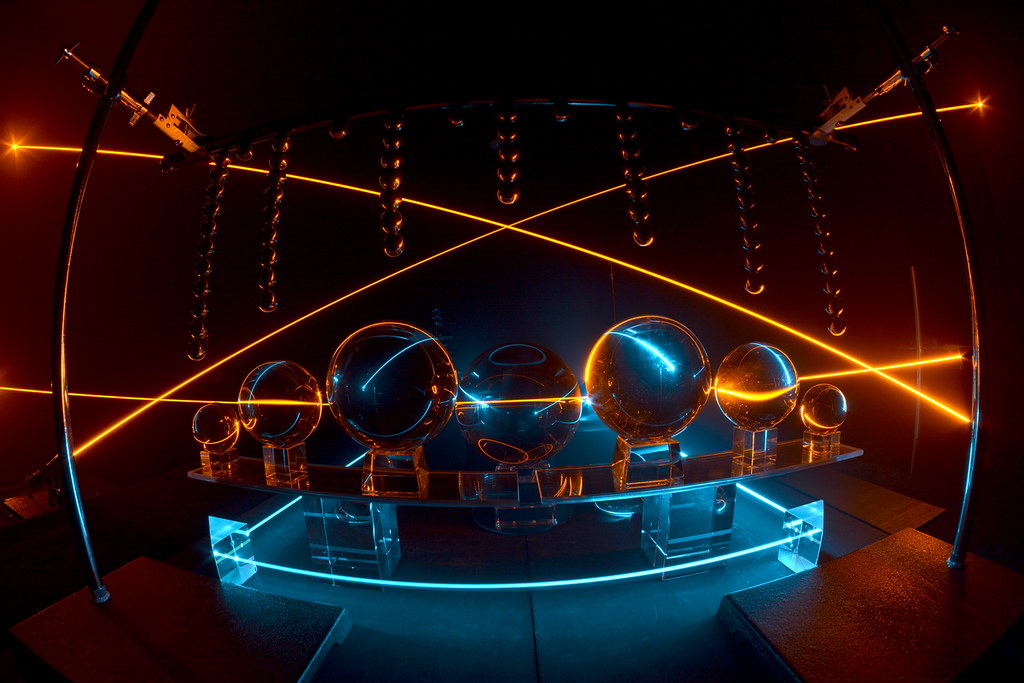 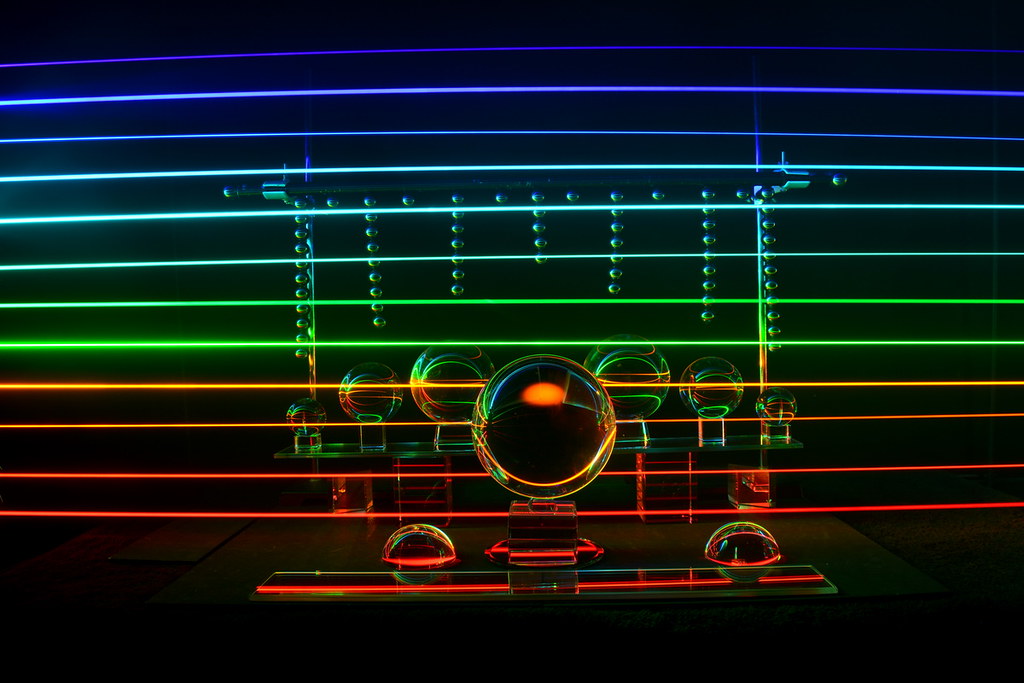 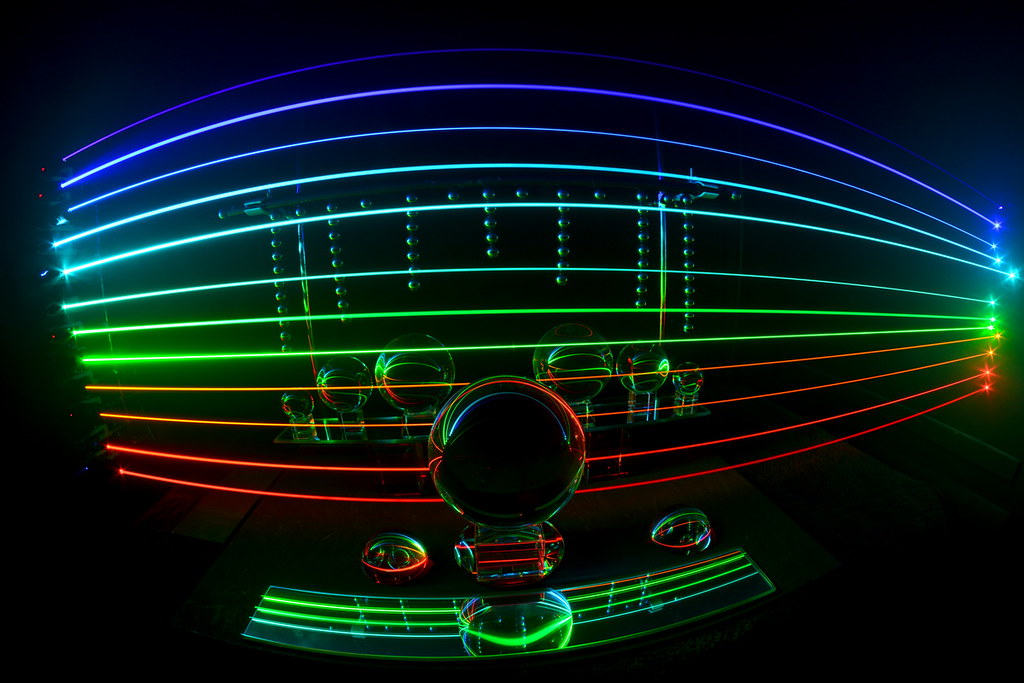 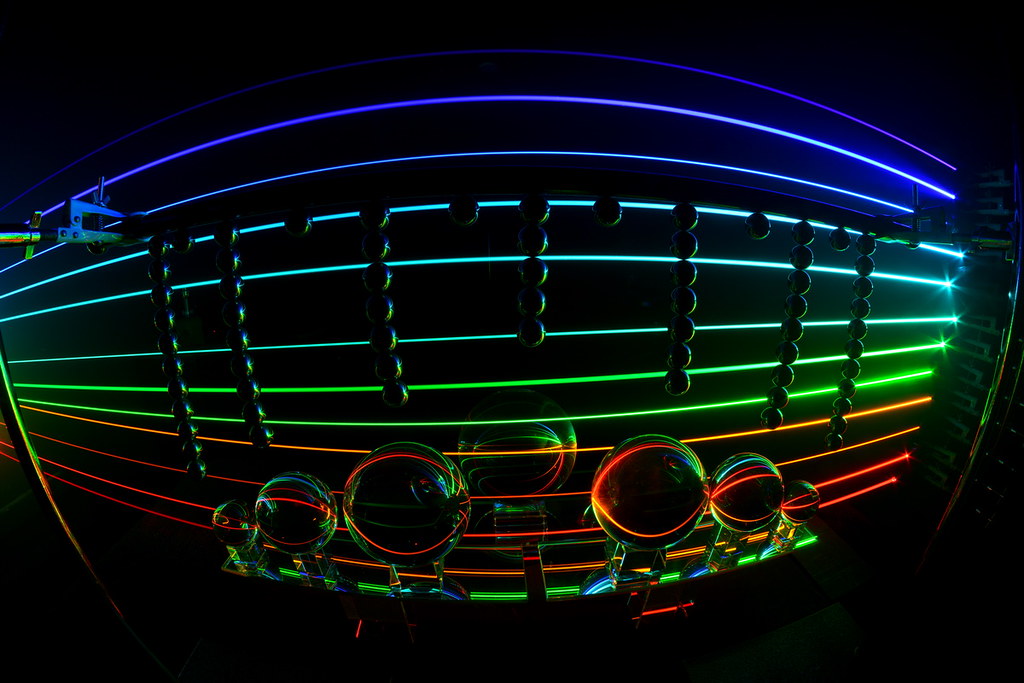 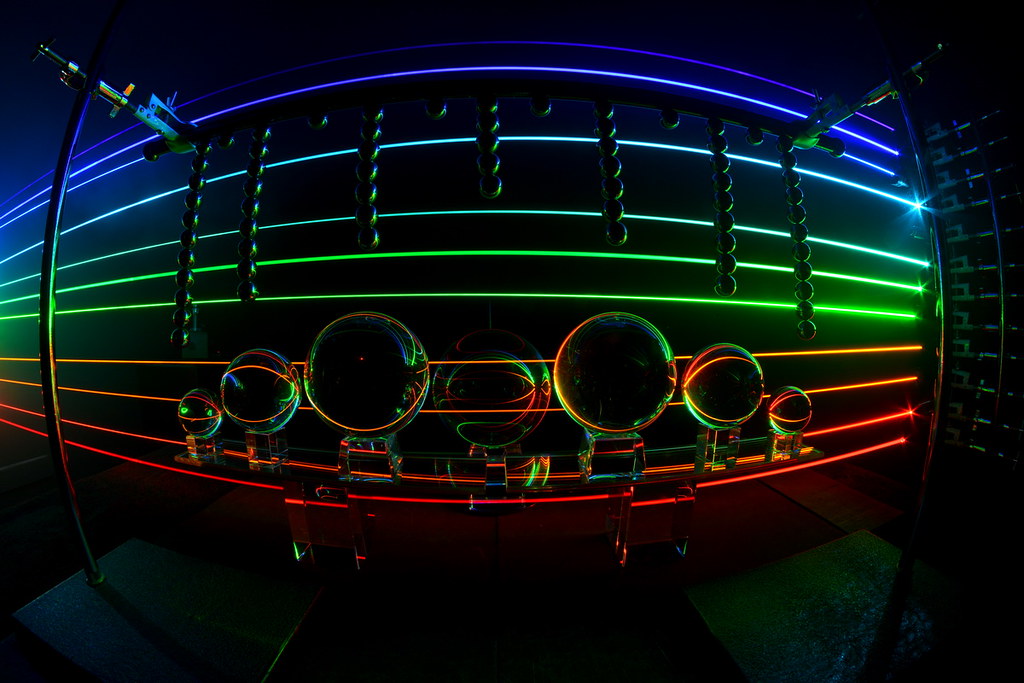 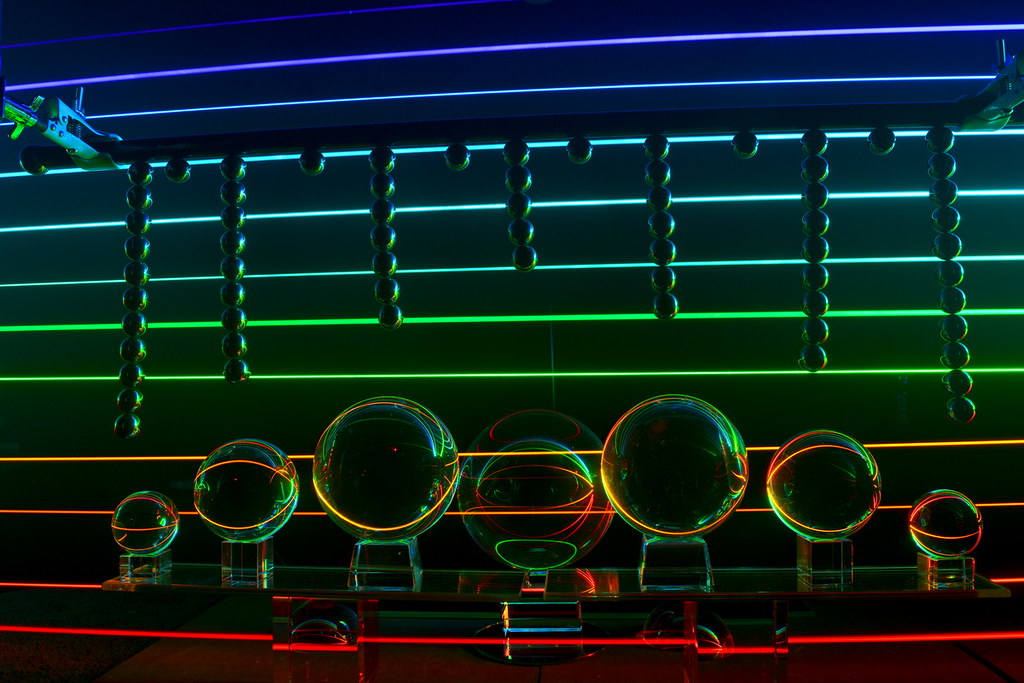 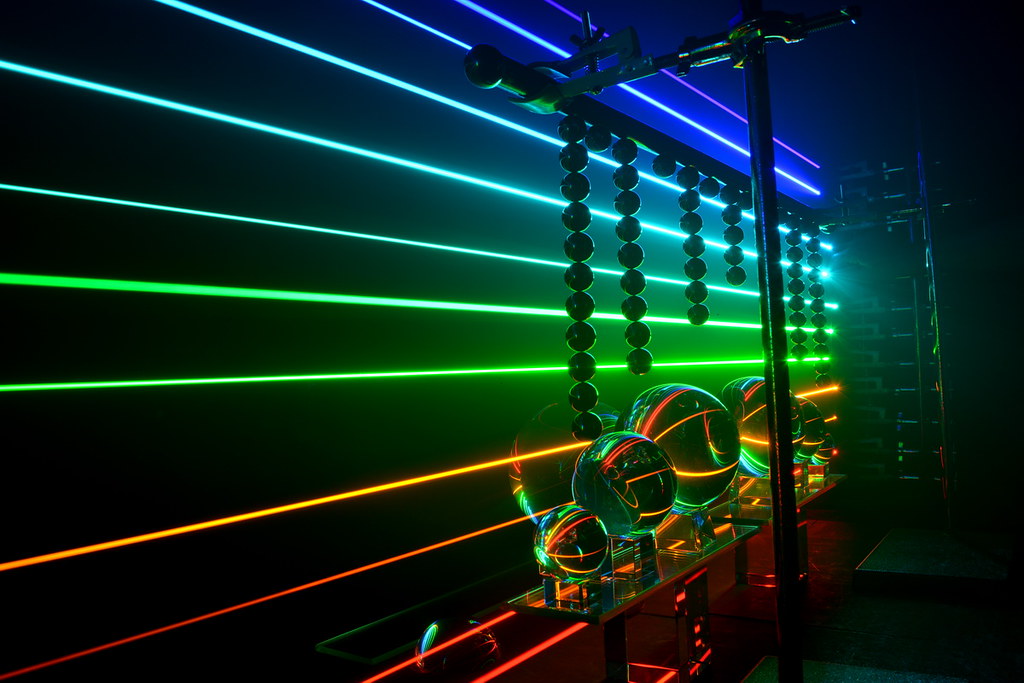 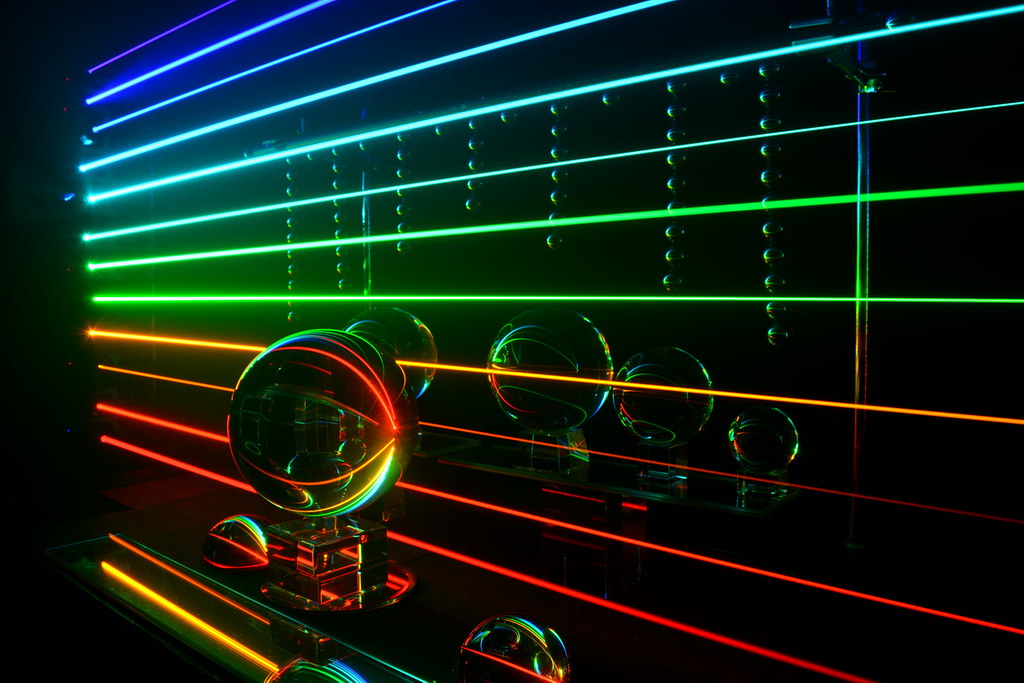 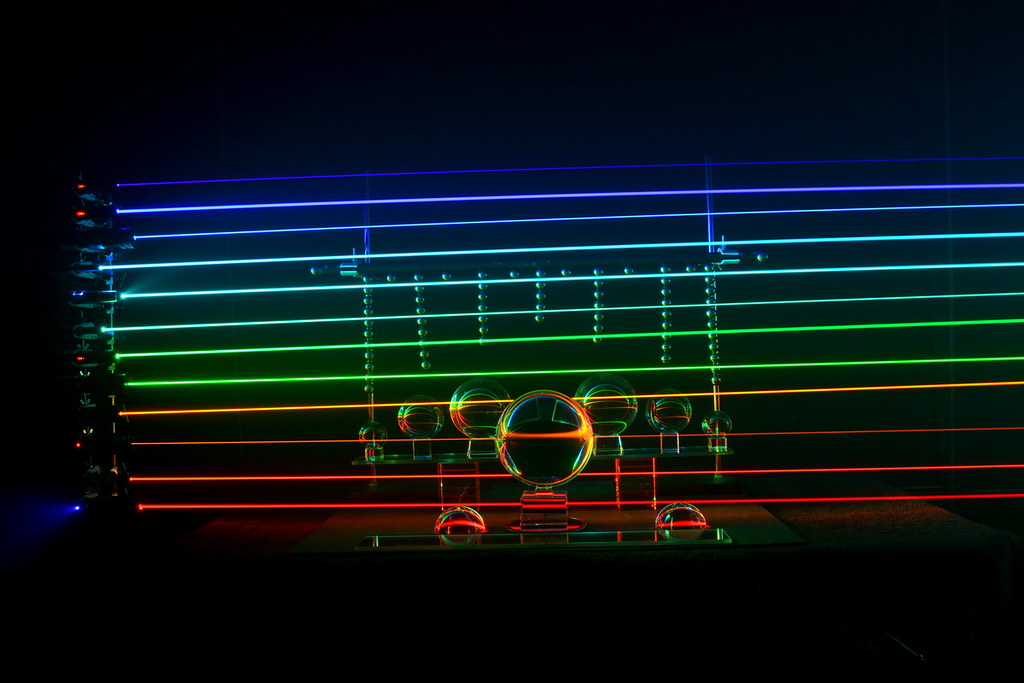 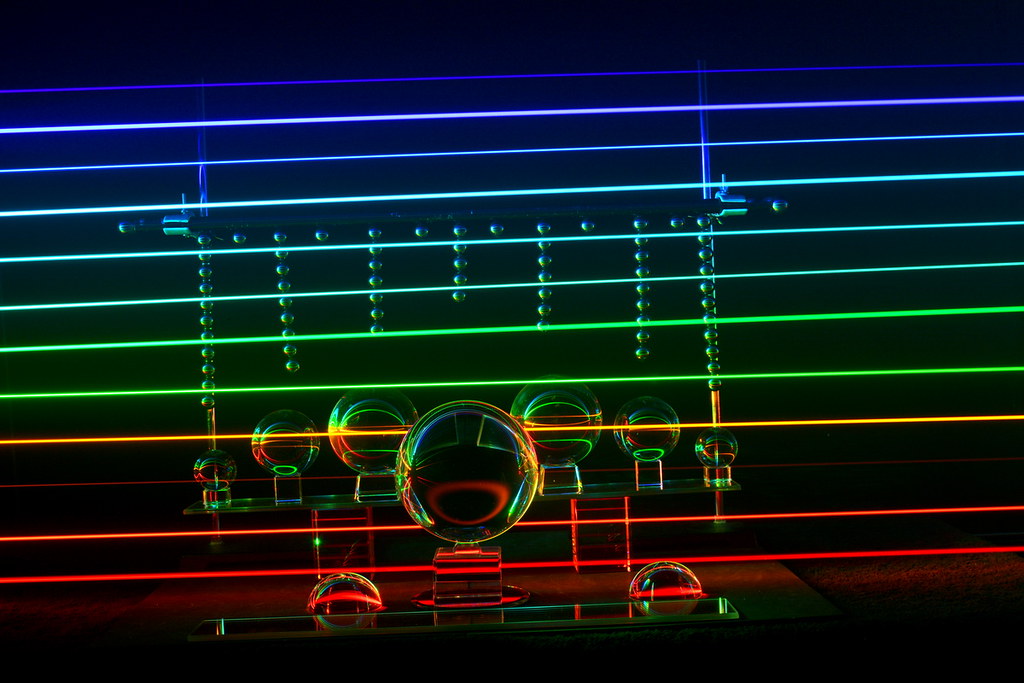 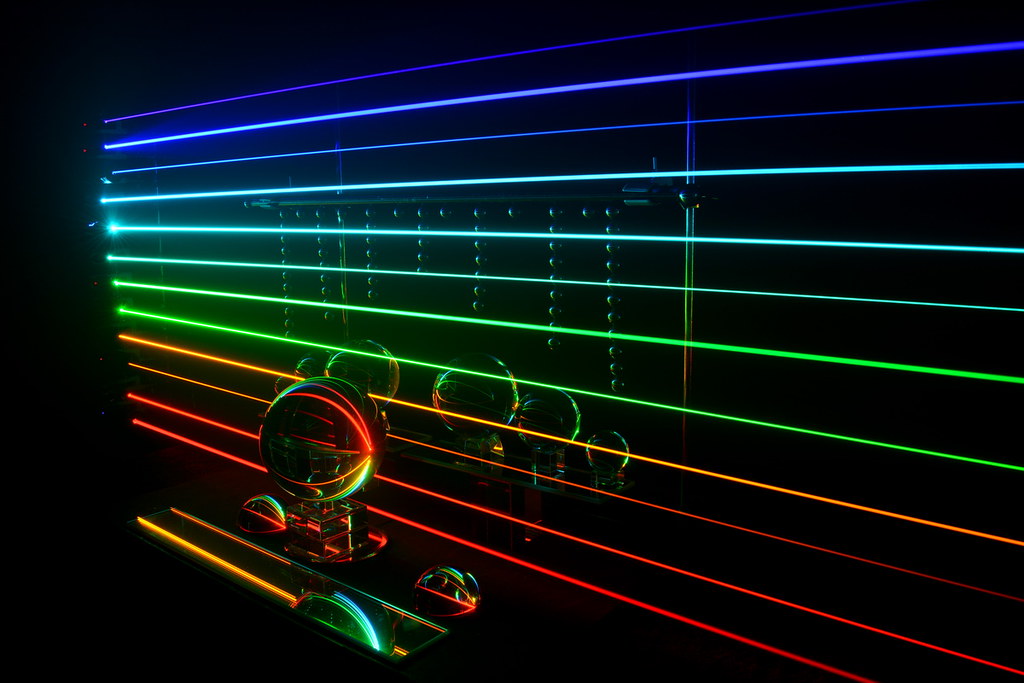 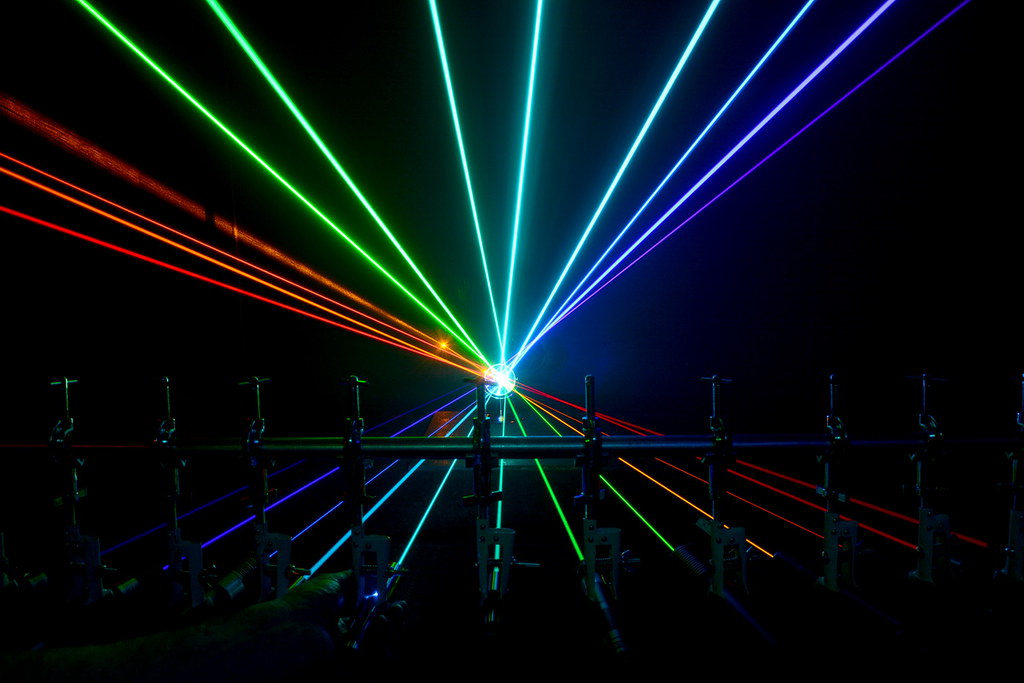 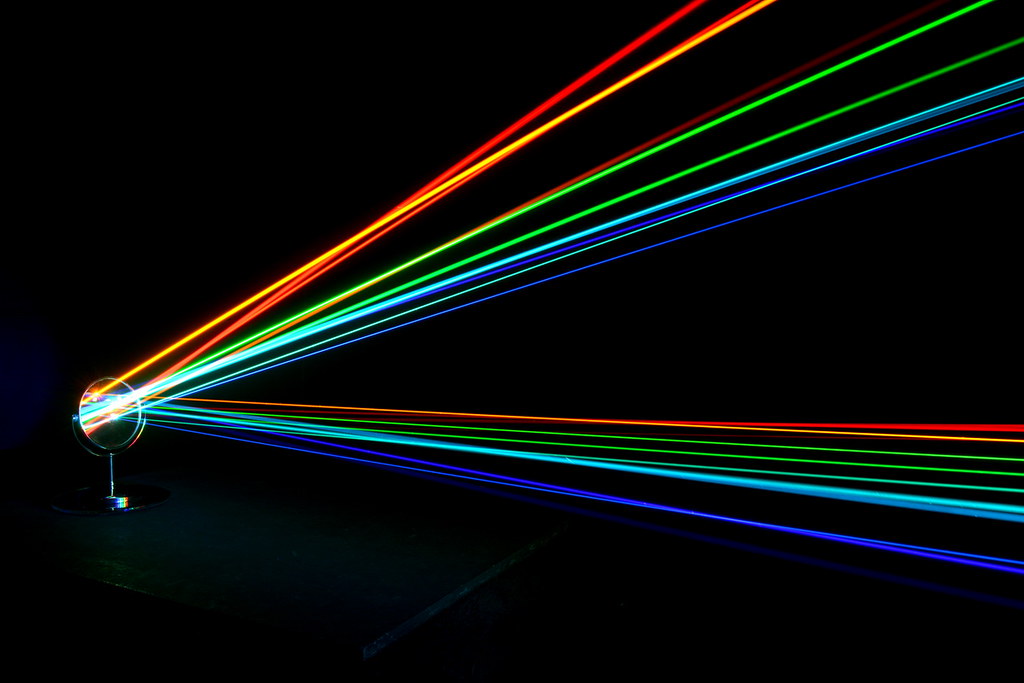 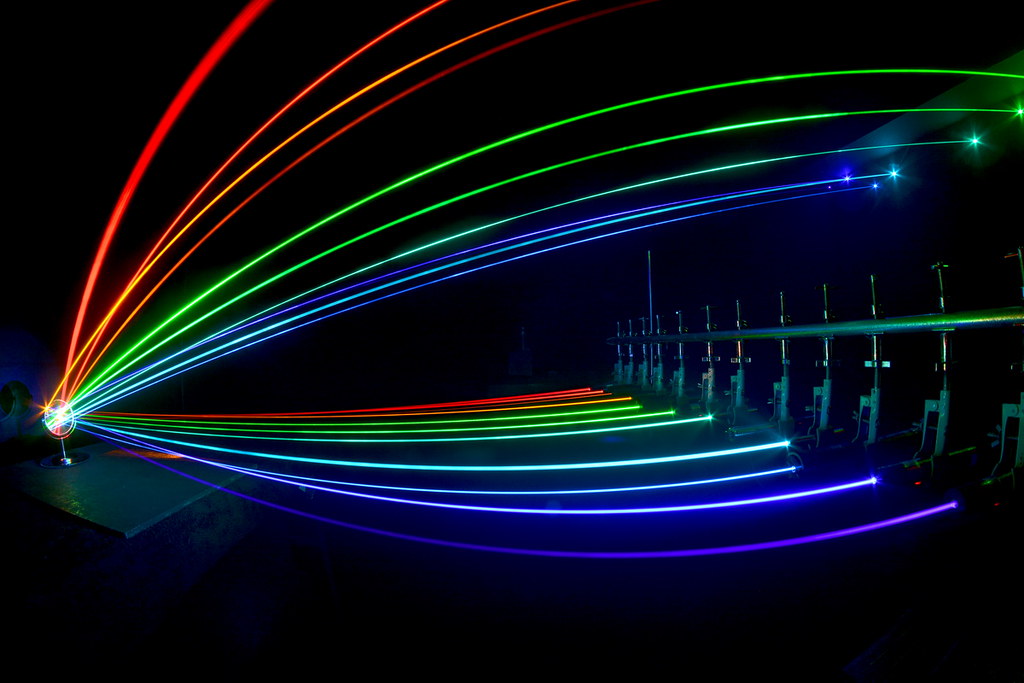 Great balls of fire, Bruce, those are nice!
Don'y ever let anyone say that you don't have balls!

That 488nm and 589nm sure do compliment each other well.

Gorgeous as always, Bruce. It is a nice way to start ones day seeing your laser art.

That 'wall of lasers' (TWELVE!?!) different wavelengths - looks stunning. Kudos for getting them so parallel. I have no clue how you are able to orchestrate controlling power to them separately and getting the exposures seemly so balanced. Blows me away.

A little off topic - but on setting them up "straight" - I've been using labbies more lately, and having a vibrating fan on the back can cause them to dance around a bit Def an advantage of using a pointer is not having that fan spinning...BUT then you are clicking on/off (causing potential alignment)!! Again - kudos for such precise setups. These are AWESOME pics, but even more incredible is the set up, IMO!

Lastly, to reiterate BTG's point - that 488/589 is something slick. I need to find a yellow in the near future. Dragon the way to go?

Lew - For the twelve nm rainbow, here i what I had to do to get it as you see it:

For my 638nm, the switch has to be held down. Since it is a pen (Laserbtb) I use a big Binder clip from Staples. I have been using this same clip since 2012. I glued padding on both sides and it has always useful. So I just put on the clip and it stays on as long as I need it to be.

For my 495nm, which I purchased from jnrpop (beautiful color and build) , the switch has to be held down and the bottom gets pushed into the unit so I have not thought of a way to keep it down. For shots where you cannot see the lasers it is no problem since I am off camera. But if I am shooting wide angle or fisheye I put on a black sleeve on my arm and a black glove on my hand and hold it down. MOst of the time you can't see my hand. Since this laser is 145mw, it is more powerful than most I used of the twelve, and on a 8 second exposure, I am using that one for 3-4 seconds. When done right , you would never know. To keep that one steady, I use my most secure clamp and with my left hand put my finger underneath and then push the top. Once I have it on for a second I have the wireless remote for the camera in my other hand and take the photo. I will keep it on for a portion of the expose and you see what you see. It only will stay on for approx 8 seconds so that has limitations for certain shots.

And lastly for my CNI PGL 593.5 - I purchased it as 30mw. One a good day it will get close to that, but after actual use time of about 5 minutes, the beam will not as bright. So I have to make sure every thing else going on in the photo is perfect, and then turn on the 593.5 and quickly get the shots I want. If you were to look at all of the photos from that week on flickr you will see a good amount where the 593.5 is weak.

Dragon Lasers is really the only handheld 589 around that has 30mw and 50mw. And back when there were group buys for Dragon Laser 589nm 50mw, many of them were over 100mw. Before that there was a one successful group buy from CNI for PGL 589nm (I think) 80mw.
I regret not getting one of them in this group buy, and the next one never got off the ground. Pretty much anyone who got a DL 589 is happy with it