Sneak peek of a 561 nm project

Normally I will post when a project is complete but I'm excited to have the electrical work done (just some simple wiring of components) and wanted to show it off.

Its a 561 nm module from SuckPit doing about 3 mW.
The laser is pulsed.
Its going to be installed in a hand-made aluminum-bronze host. It will be micro-USB rechargeable with a little 500 mAh LiPo installed. 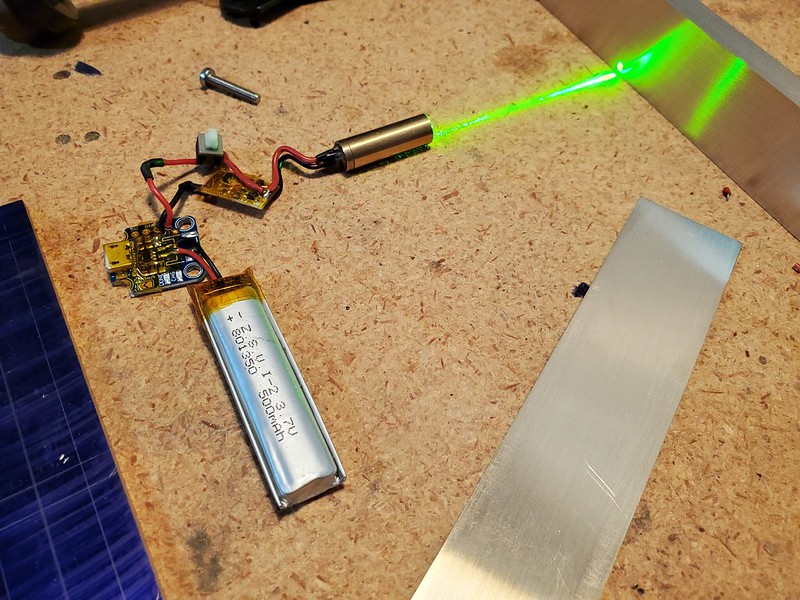 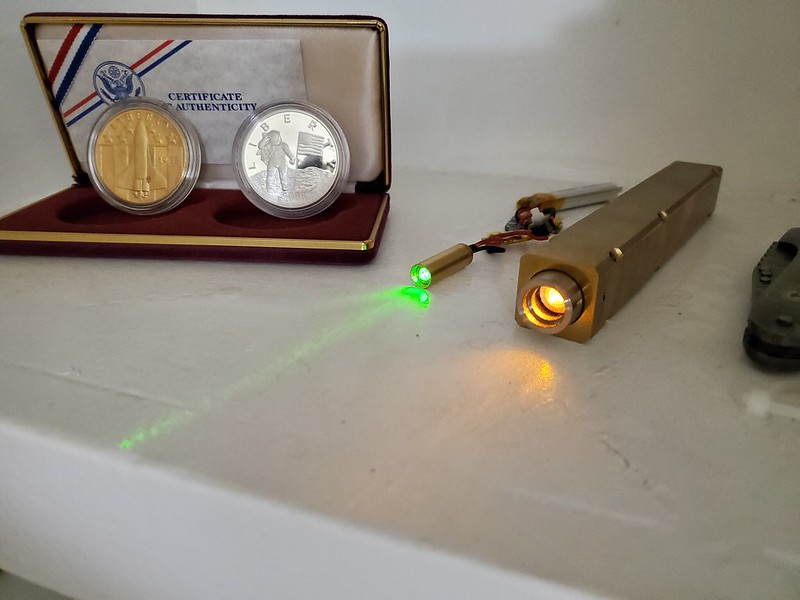 I love those little usb circuits. You can use them for everything. I like the square host too. I thought about those in the past and had always intended having one made but just never got to it. Good work on the wiring too.

Updates on the build:

As of 2 weeks ago, the main parts of the housing are roughed out and honed to a flat, brushed finish for testing the fitment.
Holes in the base plate are threaded by hand. I also replaced the wiring with some high-quality silicone insulated silver wire I thought I had lost.
The aluminum heatsink shown in the pictures below was re-made twice, as the first attempt wasn't quite right and I learned a few things during the process. The current version is slightly different, fits better, and is more functional.
Since these photos were taken, I've made a lot of progress and will update later this week. 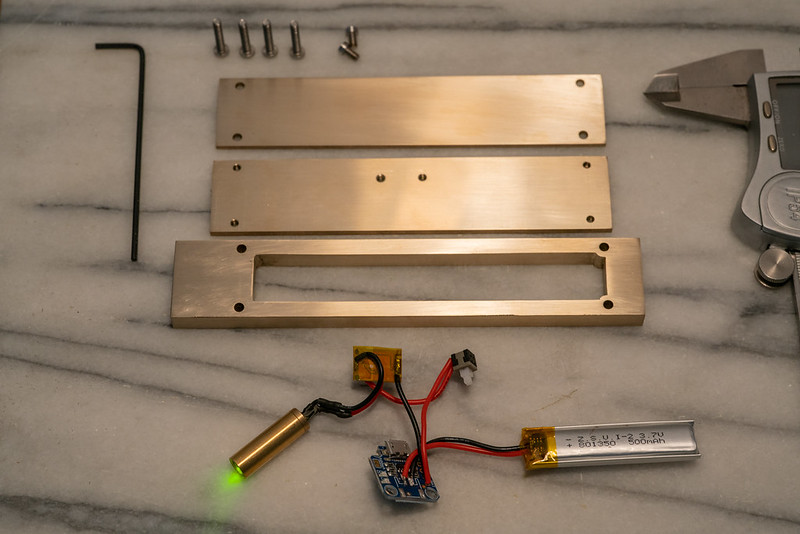 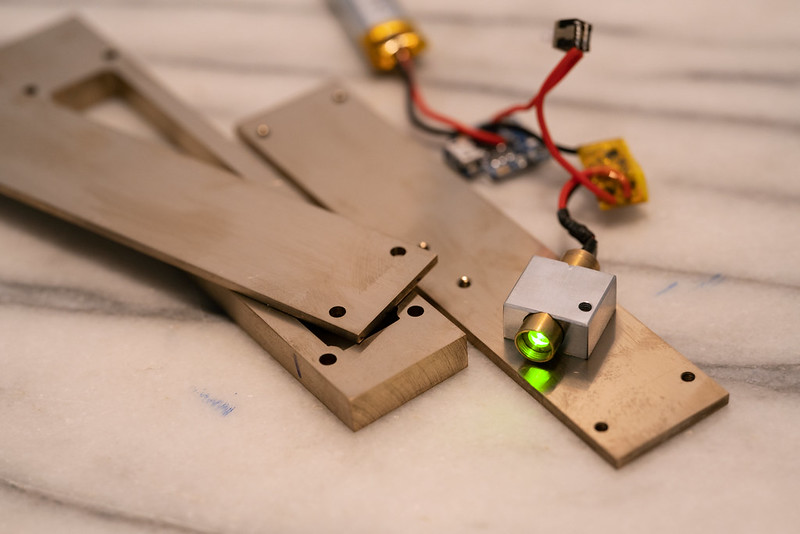 Note: I used selective color in photoshop to adjust the laser's color so it is closer to reality. White balance between the two photos isn't matched because I was lazy, not that anyone cares.

Awesome looking host. Reminds me of the Bond villain, The man with the Golden Gun.

Made some good progress this week.
There is still a lot of work to do but it's functional and fits well.
I designed a very simple mechanism to align the beam and it turned out great.
The hex screw that secures the module in place is threaded into a blind hole. The aluminum heatsink has enough lateral clearance to be adjusted slightly for horizontal alignment. Rotating the module in the heatsink adjusts for vertical alignment. Very effective and easy to adjust. 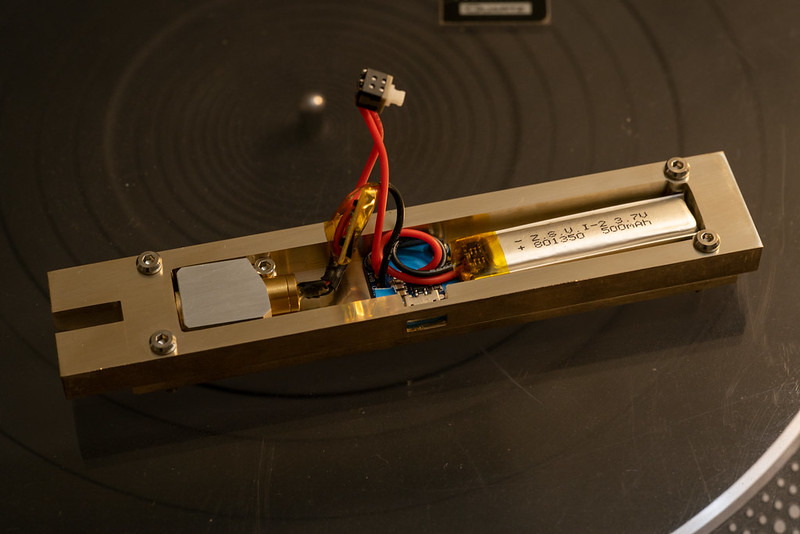 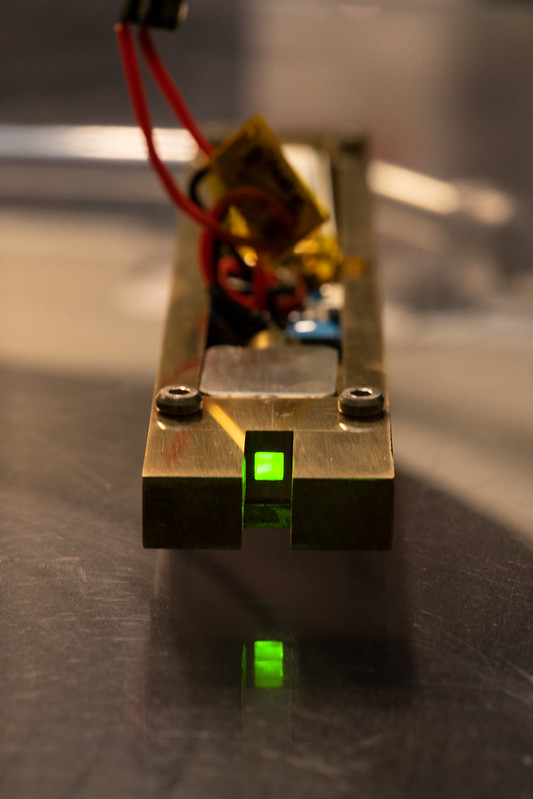