Hey everyone, for my first laser review ever I'll be reviewing the 492nm Challenger II I purchased recently from Sanwu. This is going to be a more qualitative than quantitative review. I don't have an LPM or spectrometer, but rather than offering experimental results I hope to effectively communicate what it's like to own and use this thing through my own eyes (with safety glasses of course).

INTRO/SHIPPING
I purchased this laser and a pair of OD6 safety glasses back in January and had the package in my hands three and a half weeks later (I live East Coast US and selected FedEx shipping). I ordered a single 18650 li-ion battery from Sanwu as well which came the following week, locally sourced. I trusted Sanwu to pick the right battery since some Challenger II reviews said 18650s shorter than 69mm wouldn't fit inside the laser correctly, and Sanwu didn't disappoint. Before I even had the battery, I was super excited to hold this device in my hand. The laser comes sealed in its own plastic wrap, and the craftsmanship is apparent at first glance as well as the significant weight. The weight doesn't bother me. It's heavy enough to feel like there's some impressive machinery under the hood but not heavy enough to be burdensome. With the 18650 battery configuration, it's still small enough to fit in all my pockets (men's clothes). Here's the laser standing up and with the tailcap and battery removed. 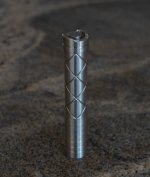 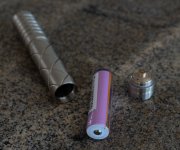 BRIGHTNESS/POWER
This is the highest rated 492nm option I could find on Sanwu's website. It comes with a G7 lens, meaning the final output power is about 88% of the raw power at 140mw or so. Again, no LPM so the numbers are rough. Turning it on, it is clearly the brightest laser in my possession. The 492 wavelength is close enough to 555 to give it an advantage in perceived brightness, and the 160mw power is no joke. The only laser I have more powerful is my 200mw 405 pocket series which doesn't hold a candle to the brightness. Using the laser brightness calculator and common sense, the closest rival I own is my 50mw 637nm Viper from D/L which itself only comes in at 27% of the brightness. Then again I'm just beginning to explore higher powered lasers after sticking with lower powered options for a long time. I currently have no desire for a multiwatt beast like many of you have, but I have a feeling if the zombie apocalypse happens before I give in and buy one I'll seriously regret it. Anyway, back to the review!

COLOR
The color is best described as a pure cyan and nothing else. Don’t expect blue when you turn this on. Don’t really expect green either. It’s a unique, right down the middle cyan/turquoise/aqua color. If I was thinking in terms of blue and green, I might say that the light appears more blue during the day and more green at night, but why should we limit ourselves to those arbitrary markers on the color spectrum? It’s a spectrum after all, with infinite possibilities, and 492nm is reliably cyan all the time. It is a completely different color than my 473nm blue and (more obviously) 532nm green. Cameras tend to pick it up as light blue but I happen to be a photographer and photoshop geek and there’s nothing some educated color correction can’t fix. The color is really nice overall. I know these diodes aren’t that rare anymore but I still find it hard to believe I have this wavelength in my collection.

BURNING
I want to briefly talk about burning before jumping into what it's like in different lighting conditions and some pictures. I didn't buy this for burning, but that said, it does a decent job. The laser has a focusing thread at the head that blends perfectly with the rest of the body. It’s really seamless. Turning the head to the right crushes the rectangular beam down to a small dot for your destructive needs. So far I’ve used the laser to light matches, pop balloons, and engrave black plastic surfaces, but in all honesty it doesn’t rip through materials like my 200mw 405 pocket series. It’s more of a slow burn, good if needed but probably not the main selling point. For me, this thing is more about the brightness, the beauty of that 492 color, and the benefits of having a well made robust handheld laser like increased duty cycle, threads for attachments, build quality and so on.

DAYTIME USE
If used outside in the daytime in open spaces away from people or animals, it can be a really good pointer and the dot is very visible.
Two daytime shots--on the left, the dot can be seen on the tree in the shade ~25ft away and on the right it can be seen in direct sunlight on the dock ~40ft away. 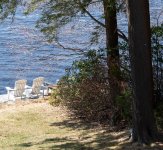 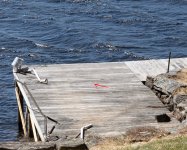 NIGHTTIME USE
It's just gorgeous at night. I'm not sure what else to say here, so have some beamshots. P.S. This was far away from metropolitan areas and I was very cautious not to shine this near any aircraft or houses P.P.S. Sorry I don't have pics to prove it but I also have to mention it's an absolute beast in the fog at night, the last time it was foggy out I felt like I was holding a bolt of aqua lightning.
<<<BEAM HYPE>>> 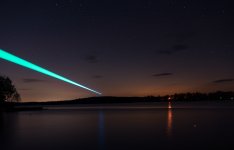 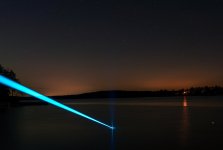 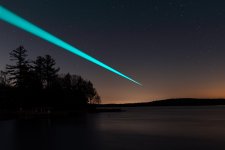 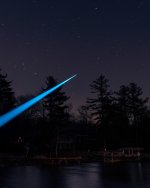 I shot these with my sony a7iii mounted to a tripod and the laser rigged to my camera with a clamp. Settings: 10 sec exposure, f2.8, ISO 1250 and 35mm focal length. Keep in mind while I edited these with realism in mind, I still edited them slightly. Otherwise the beam would be a plain light blue color, inaccurate and boring haha. They represent reality well in my opinion, except the beam wasn't as intensely bright and it had that characteristic sparkle from all the particles in the air. I wonder if the massive reach of that light freaked out any onlookers.

CONCLUSION
That's essentially it for my review! I'm loving this laser, and I hope despite my lack of professional measurements and specs you could take away something.

Obligatory shoutout to Francis from Sanwu for answering my never ending questions regarding my orders in the nicest and most informative way possible. There’s definitely a reason that guy gets a good rap.

FYI: I’m not receiving anything to write this review. I’m simply a noob on the forum that wants to contribute.

Nice review! Seriously considering one of these in a Red Guardian host.

dreaming said:
Nice review! Seriously considering one of these in a Red Guardian host
Click to expand...

Thanks! Your reviews are great and that red host/cyan laser combo sounds really nice. Complementary colors

Thank you I appreciate it! I wasn't sure how those were going to turn out but I was very satisfied with the results. Was staying at a lake for the weekend so I took advantage of the location

Fantastic review especially when considering that you don't have test equipment like a LPM or a spectrometer at your disposal!
F

Nice work! I wonder how they get 492 nm? Binned diodes?

FAP said:
Nice work! I wonder how they get 492 nm? Binned diodes?
Click to expand...

I'm not an expert nor have I asked Sanwu, which would probably be the easiest way to find out. But from what I've read on the forum it's possible that they have a diode that could either be 488 or 492 depending on the specific unit and how much power is being pushed into it. Apparently higher power levels tend to bring it closer to 492, which explains why their 488 option is always lower powered than the 492 in the same host. Anyone know the specific diode they use?
F

If it is the Sharp GH04850B2G 55 mw rated diode I am surprised it can produce that much power, that is the only low cost diode I am aware of which could reach that wavelength. If there is another one rated for higher at that color, I'd love to know.