Yes, your batteries should never run hot. I don't vape, so I couldn't tell you about a cell supplying 30+ amps. My batteries never run warm.
Last edited: Jan 30, 2018

Also may want to measure the current draw of the laser as well.
I usually do this on new lasers and make note of it.
A sudden increase in power input with no increase in optical power or reduced optical power (often accompanied by stripes or striations in the output most visible when viewed with no collimator) is telltale signs of diode troubles which unfortunately are not reversible.

It got warm quickly but not putting out the full potentail laser. Al the bars lught but are dim. Could the driver be fried? Or. Are the batteries just garbage

Can you post a beam profile pic? (raw diode output)

You definitely want to rule out a battery issue. Full charge is 4.2V open terminal. However, a bad cell can measure that but with a typical load of 800-1000 milliohms it could drop to under 3.5V indicating a bad cell.

The driver could be bad too. And it's important to remember that total current isn't diode current. This is why I like to capture initial current as a starting point in case the laser starts to act up.

Just adding this opinion: I have run this diode with 18650 batteries without a problem, but my preference is 26650 for high current laser diodes.

trussmonkey25 said:
The batteries were ultrafire 18650s that sat in a drawer for more than a year since the last charge. Im sure I can get much better ones at the nearby vape shop
Click to expand...

What is the advantage of designing this model to be powered by 18650 rather than 26650 batteries? Thanks.

Some folk like slimmer laser pointers, otherwise a good 26650 is my choice due to the extra capacity. I like using two in series, even if the diode driver only requires one but will take two. The extra voltage is a waste if the driver is a linear driver but if a high efficiency CC regulator far worth it, if you don't want to recharge the batteries as often (As the battery current draw is reduced extending the run time. The regulator will provide the needed current at a lower voltage, this might be counter intuitive on the face of it as adding batteries in series doesn't give extra capacity for a given voltage output, but can if using a high efficiency driver with a battery source that has far more voltage than needed for the diode).

You will find a lot of 18650 batteries advertised for far more capacity than they can possibly have, so be careful what you believe, it takes a bit of research to be able to understand how many of these re-wrappers make two to three times higher capacity claims than the battery can really produce.

Semi-off topic: If you really want extra capacity, having done research for a uber high capacity battery supply using either 26650 or 18650 batteries, I've found you can get far more capacity than a single 26650 by running two or three paralleled 18650 batteries. The diameter won't be a whole lot larger when doing so and they will give you far more capacity than a single 26650 when paralleled, but then you have a potential for disaster if one of the cells in parallel has a problem, or isn't charged, the other batteries will super over-current charge the depleted battery, boom!
Last edited: Jan 30, 2018

The new kid on the block is the 20700 and 21700. The latter being even more capacity, some reaching 40A and 3+ Ah capacity. Most 26650s will have better capacity at the expense of more limited current draw. Good ones will power any handheld laser without issue. Unless you have an active (TEC) cooling system, massive heatsink, etc. you will always be duty cycle limited for thermal reasons rather than battery limited.

If you need even more capacity, there are lipo packs if you are inclined to go there. There is no reason why you couldn't get 100W CW out of an array of 20 diodes. It wouldn't be very portable or even practical, but lots of fun.

Just updated the tracking, my silver is in NYC being handed over to USPS. They estimate it will delivered by Friday. (Groundhog Day!)
Last edited: Jan 30, 2018

Vape battery market is a god send for laser hobbyists

You are correct Sir, high drain formulations have less total capacity but don't sag under load nearly as much, this is good when your buck/boost driver has a cutoff not that far from your batteries charged/float voltage.

The 7 watt spiker should draw about 3 amps from 2 fully charged cells of IMR/INR formulation.

That sounds about right. About 25 watts, 18 watts of waste heat.

The host gets at the head hot but not the batteries.

At least that's what I have seen with the SXD bucking drivers.

I would use a thick jumper ( in place of the tail cap switch ) and an inductive ammeter, I don't know that you would get an accurate reading if testing in line.
Last edited: Jan 31, 2018

From post #42, you said these lasers pulled 3 amps from 2 fully charged Lipo batteries. At 8.4 volts that's 25 watts. Regardless of the efficiency of the driver, if it puts out 7 watts of optical power, that leaves 18 watts of waste heat. The driver expenses heat as well.
Last edited: Jan 31, 2018


This test diode is likely one of the more efficient or at least average. Also there's 5% loss through the G2 lens. So waste heat could be slightly less than 15.5w on the diodes end, but in the ballpark. Add back in 5% for lens loss and diode waste from this pic shows 14w of waste heat. 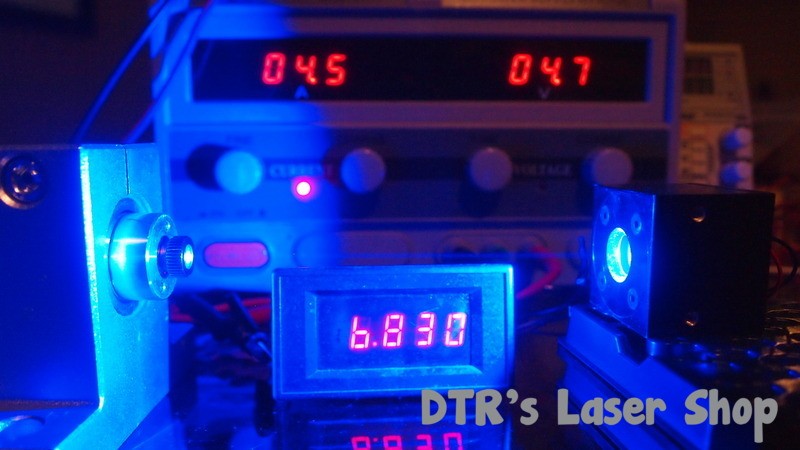