The Assassin 405nm Adjustable Focus Rechargeable Violet Laser (hereinafter probably referred to as simply the Assassin) is a violet-emitting, directly-injected laser. That is, it produces violet laser radiation directly, without the need for messy, fragile nonlinear crystals like those green laser pointers and the amberish-yellow and 473nm blue ones as well. It uses a single 18650 rechargeable Li:ION cell meaning you'll never need to make a store run for batteries.

It is advertised to output 5mW of laser radiation at ~405nm; it has a spectrographcally measured wavelength of 402.14nm with a power output measured at 41mW.

It comes in a handsome brass body with a black finish. 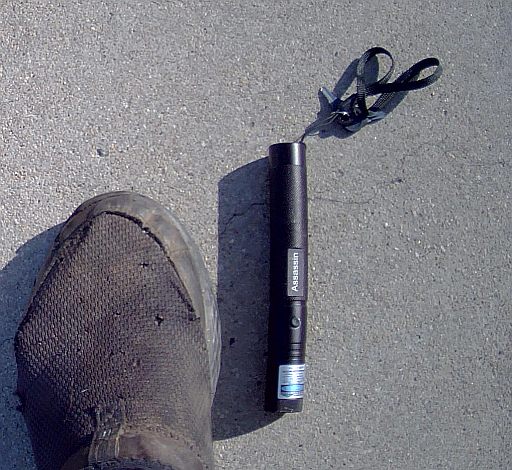 
To get the laser to turn on, first be certain that there is a freshly-charged 18650 Li:ION cell installed. If there isn't, then install it (see directly below), and THEN you can go irradiate something.

Insert one of the included interlock keys into the keyway (keyhole) in the tailcap, rotate it ¼ of a turn clockwise, and pull the key straight out.

When you're finished using it, insert one of the included interlock keys into the keyway, rotate it ¼ of a turn counterclockwise (anticlockwise), and pull the key straight out.

To adjust the focus of the Assassin, turn the bezel (the ring at the very front of the unit) counterclockwise (anticlockwise) to widen the beam, and turn it clockwise to tighten the beam back up.


To charge the battery in this violet laser , unscrew the laser's tailcap, and set it aside.

Tip the flat 18650 cell and into your hand, and pop it into the included charger (see directly below).

Insert a freshly-charged 18650 Li:ION cell into the barrel, flat-end (-) negative first. This is the opposite of how batteries are installed in most flashlights, so please pay attention to polarity here.


To charge the 18650 cell, insert it into the charging cradle of the furnished charger, orienting it so that its button-end (+) positive faces the flat end of the charger, and plug it into any standard (in north America anyway) 110 to 130 VAC 60Hz household wall receptacle (it can be used on European power -- typically 220 to 240VAC 50Hz though you'll have to obtain a plug style adapter for your country.)

A red light on the charger will come on to let you know that the charge cycle is in progress. When this light turns green, you may safely unplug the charger, remove the battery from it, and reinstall it in your Assassin laser.

This is a self-contained laser , and not a flashlight meant to be carried around, thrashed, trashed, and abused - so I won't try to drown it in the toliet tank, bash it against a steel rod or against a concrete porch, let my mother's big dog's ghost or my sister's kitty cats piddle (uranate) on it, run over it with a 450lb Celebrity motorised wheelchair, stomp on it, use a small or medium ball peen hammer in order to bash it open to check it for candiosity, fire it from the cannoñata, drop it down the top of Mt. Erupto (I guess I've been watching the TV program "Viva Piñata" too much again

- candiosity is usually checked with a laser-type device on a platform with a large readout (located at Piñata Central {aka. "Party Central"}), with a handheld wand that Langston Lickatoad uses, or with a pack-of-cards-sized device that Fergy Fudgehog uses; the cannoñata (also located at Piñata Central) is only used to shoot piñatas to piñata parties away from picturesque Piñata Island, and Mt. Erupto is an active volcano on Piñata Island), send it to the Daystrom Institute for additional analysis, or perform other indecencies on it that a flashlight might have to have performed on it. So this section of the web page will be ***SIGNIFICANTLY*** more bare than this section of the web page on a page about a flashlight.

This is a directly-injected laser though, who's active components are the inverter circuit, the laser diode, and the collimating lens. So it should withstand accidents better than a DPSS (diode pumped solid state) laser - the type of laser assembly found in yellow (593.5nm), green (532nm) and blue (473nm) laser pointers. These lasers have several additional components (crystals, filters, etc.) in the optical train, and you can knock them out of alignment by doing little more than looking at them the wrong way. And if any of these components are knocked out of whack, you'll no longer get your yellow, green, or blue laser beam.

Though you still do not want to intentionally drop your violet-emitting laser because it's a precision optical instrument. 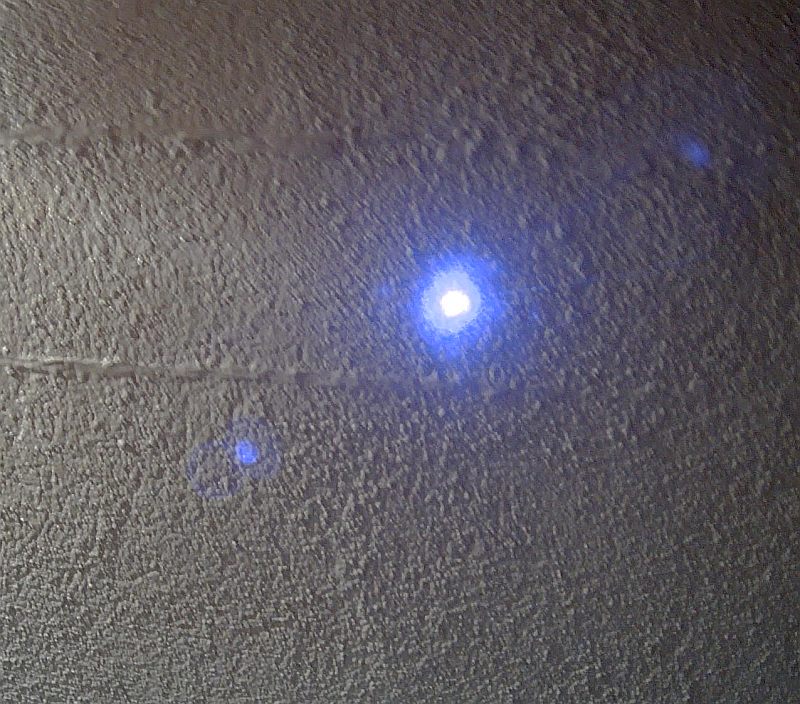 Beam terminus photograph of this laser on a wall at ~12".
Beam image bloomed ***SIGNIFICANTLY***.
I deliberately photographed this in somewhat low daylight to help reduce image blooming!!!

That white & blue color does not really exist; the spot appears to be a very deep royal purple to the eye.
Digital cameras have a tough time at these wavelengths.

And yes, I know that the colors purple and violet are two different critters, but the phrase "royal violet" would not make very much sense; however, most everybody knows what "royal purple" looks like.

Purple is a mixture of red & blue; violet is a spectral color, encompassing wavelengths of ~390nm to ~420nm. 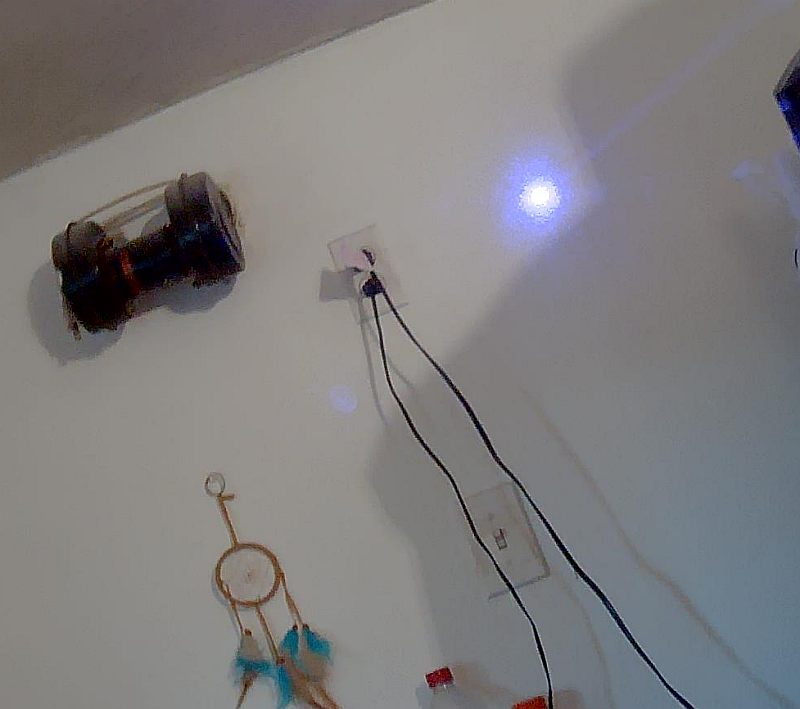 Beam terminus photograph on a wall at ~10'.
Again, that white & blue color does not really exist. 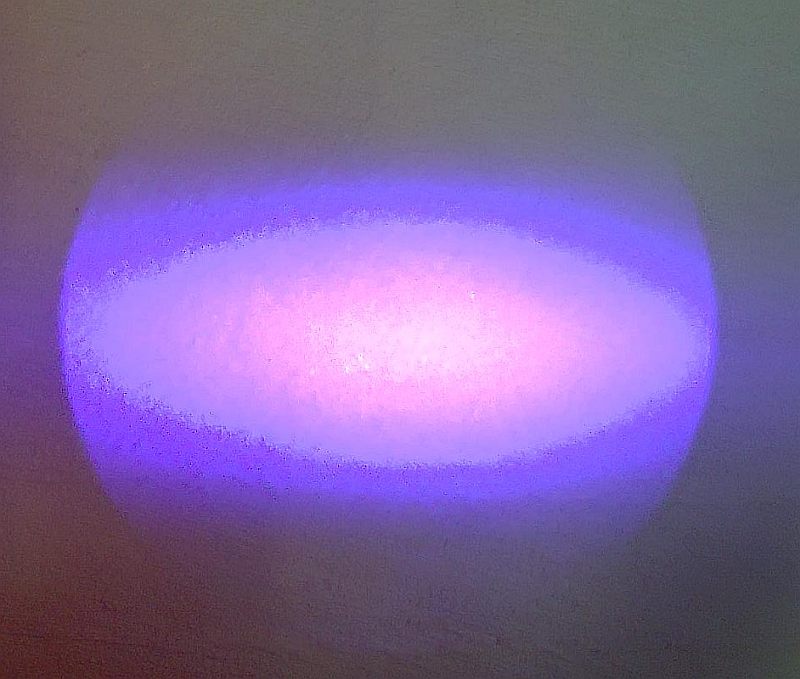 Beam terminus photograph on a wall at ~12"; lens was removed for this photo to show the distinctly oblong beam profile that is characteristic of directly-injected diode lasers.
You may see that some minor vignetting is occurring along the fast axis; this is quite minor though, and is nothing to write home about.

Spectrographic analysis of the Blu-ray laser diode in this product.
Wavelength appears to be ~400nm, which is within specification for the type of laser diode used in this laser.

Same as above; but spectrometer's response narrowed to a band between 390nm and 410nm.
This shows that the wavelength is 402.14nm.

The raw spectrometer data (tab-delimited that can be loaded into Excel) is at assassin.txt

A beam cross-sectional analysis would normally appear here, but the ProMetric System
that I use for that test was destroyed by lightning in mid-July 2013.

I have decided to rate this wonderful little laser four stars!!!

The only real reasons that it did not receive five stars is because the claimed power output and the measured power output vary so greatly (claimed at <5mW, measured at 41mW) -- a rather severe no-no!!!
It also lacks some safety features required of a CDRH Class IIIb laser -- namely the turn-on delay, the mechanical beam shutter and the visible light emissions indicator.

CONS:
Just the usual suspects for laser modules/pointers - nothing that affects rating...actually, there is one little thing: it is advertised as a 5mW laser, but outputs 41mW of laser radiation.
That's what lopped most of that last star off.