I am trying to simulate an M140 diode, and I would like to run it at exactly 1.8A.
(The driver I'm using can supply up to 5A, so I fear the possibility of accidentally over-currenting my diode.)

Rectifiers: I will be using 10A10, because I have a ton of them already. (I have plenty of 1n4007 too, however unsuitable at this current.)​
Forward voltage drop @ 1.8A = 0.8V (according to datasheet figure)​
Current-Sense Resistor: I will use a 2x2 Series-Parallel arrangement of 4x 1 Ohm, 1W metal-film resistors, which will have an equivalent resistance of 1 Ohm. (Using 1W because it's just what I have on-hand already.) This new resistor is rated for 4W, but will be dissipating 3.24W @ 1.8A.​
NOW HERE'S MY ACTUAL QUESTION/PROBLEM:

Looking at a different datasheet I also see that the Vf would be just under 0.8V at 1.8A:

So your conclusion seems fair but you should still test it out by providing 1.8A and measuring the Vf yourself

gazer101 said:
So your conclusion seems fair but you should still test it out by providing 1.8A and measuring the Vf yourself
Click to expand...

Thank you! That's a great idea, I will try this first.

BUT... I want to be totally certain, was I correct to sum the voltage drop of the resistor with that of the diodes?
Assuming 0.8V per diode is the truth, is a total drop of 5V a good approximation of the laser diode for testing-purposes? (and for accurately setting the current output?)
G

I'm not particularly good electronics wise, but when I make dummy loads I just assume that 2 diodes in series = 2 x Vf.
I think adding up the Vfs is fine
E

Maybe seeing this product from Survival laser and the pdf of how to use it will help.

@gazer101 @Encap
Thanks, you guys!
You both gave information which I found very helpful, and from that I was able to test my driver, set the current, and therefore finish my laser! I will create a separate thread for pics of the final product.
But first, I'd like to share some pics of my dummy-load and the process of setting the driver current. 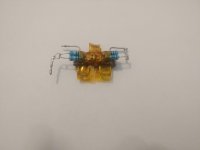 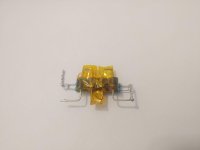 Here is testing the dummy load (before testing the driver with it) using a constant-current to ensure that the predicted voltage-drop was correct: 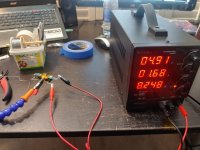 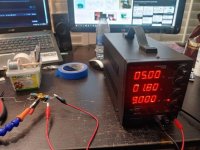 Viola! Spot-on!!!
I also probed the voltage across the resistor here, to make sure that my DMM and my bench supply both agree with each other: 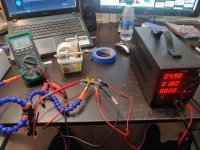 Looked okay-enough...
(Wish I had a Fluke meter instead...

Then I soldered leads to the driver and the dummy load, and stripped wires to clip on test-leads. DMM probes go across the resistor.
I set the bench supply to 8.4 V (constant V mode) to simulate fully-charged batteries (2x 18650's in series, 2*(4.2 V) ).
The potentiometer was already pretty close to where I had wanted it: 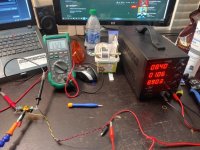 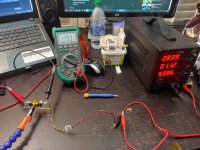 That's good-enough for me! Done! 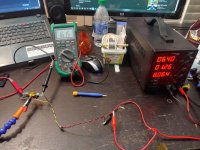 This indicates that the driver does not supply a prefect "constant current", however I believe that claim is in reference to a variable load-voltage, not a variable supply-voltage!
Makes sense, because the load (laser diode) is what needs to be protected from over-current, and not necessarily the supply. (Although some protection for the supply is a great idea!)

Then, I thought, I may as well see the current at the "nominal cell voltage" (also the same V as "storage voltage" for lithium cells) 3.7 V per cell: 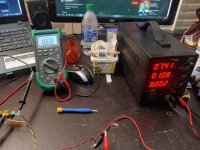 So, we can assume the driver will retain a mostly-constant-current, over "some range" of input voltages!

It would be a great idea to do this same test again, and record the current over the entire battery-voltage-range, while taking many more measurements at evenly-spaced intervals (maybe, say, 0.1 V intervals).

Then, I could create an accurate plot of how the current (supplied to the diode) changes over the course of the battery discharge cycle!

Hopefully I'll get around to that sometime... but, as of this moment, I'M TOO LAZY!

Thanks again for all the help!
I will create a separate thread about my laser, and after it's up, I'll post a link to it in this thread!
N