Few year back I had an IR laser diode that I used to pop a black balloon in a very close distance which was 1/2 inch. The device was build inside the table and the balloon rested on top of it so the expose would be within seconds and the use of the IR was because I didn't want anyone to know that I use laser beam.

I forgot what was the spec of it, I am looking at this one and would like to know if I can achieve the same result using it? I would love to be able to pop the balloon a little farther like 2, 3 inches and the balloon still pop instantly rather than a couple seconds. What can I do to achieve it. 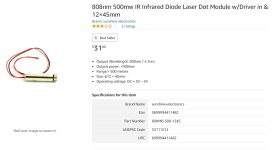 I appreciate if anyone can shed some lights for me on this subject.

The first, most important question is do you have the laser beam safely terminated? With the power your dealing with that is very important.
L

Mattronium said:
The first, most important question is do you have the laser beam safely terminated? With the power your dealing with that is very important.
Click to expand...

I have a black shutter that covers the path of the laser beam, plus the safety button that I have to push and hold before I can press the power button to turn the laser on.

Sounds really dangerous......tell me this isn't something for other people to watch like a magic show.

If I was going to use an invisible laser to pop balloons I would want an eye-safe laser 1500nm or longer, not near ir as that would be a retinal damage hazard, actually an invisible beam of any wavelength really is a bad idea for something like that, even if safely terminated or focused to a point close up so that the beam spreads out rapidly after the balloon popping point, but it really is a bad idea......maybe if your shutter was spring loaded and also tripped a switch when fully opened to enable a foot pedal switch, so the laser could only operate when the spring loaded shutter was held opened and a foot pedal was pressed, still it's just one oversight away from an accident, not a good idea.

Use a pin Or really fine wire. From a distance no one will see it.

if you want to be sophisticated use a photocell to see the object and as soon as the object pops shut back off. Let the table be the termination and fire down on it. You can be as complex as you like all the way up to vision cameras and AI
B

I have a very similar module to that one.

I'll echo what everyone else has said that this is a very dangerous idea.

808 nm behaves like visible light, but it's only faintly visible. So a) it won't be totally invisible anyway and b) it is very likely to blind people before their blink reflex. Yes, even from stray reflections, because half a watt is no joke. And half a watt that looks like maybe 15 mW of red is even worse.

So, I really don't see the point of using 808 nm for this trick anyway.
L

Thank you all for your feedback and advise. I'll look for an alternative way to accomplish the task then.
A

You should be careful with IR lasers as human tissue has a so-called "therapeutic window" between 650 and 1350nm, where light can easily penetrate the tissue. It is in fact pretty dangerous to even look at such a beam with the eyes closed, as the eyelid would be almost transparent to such wavelengths
You must log in or register to reply here.
Share:
Facebook Twitter Reddit Pinterest Tumblr WhatsApp Email Share Link