That looks great Chris, after a few days of the temps around here dipping into the single digits, that green grass and sunny sky sure does look inviting.

Yes, cool now in the 70's F. most days. 66 F at 9 PM now, won't be long and the days will warm up soon. I waited until there were none to take that photo, here is another with cars. 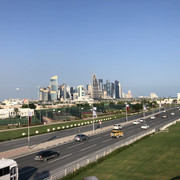 How long did it take to find the right time??
I do have to say it's a clean city! I notice from your other pics too..

Cleanest city I've ever lived in, Qatar is the richest country in the world per capita. Photo without traffic didn't take long, it was coming in spirts from a traffic light.

The United States is far behind in so many ways, not the best place to live. Very little crime here either, thefts very low, illegal numbers very low here too. I really hated it here for most of the last year and nine months due to the arrogant fast driving reckless Qatari drivers (the real Qatari's are jerks on the highway, not the foreigners working here). But, now I sometimes cut the bad Qatari drivers off every now and then for being jerks and I'm liking it here now. It's easy to spot them, most drive Land Cruisers and Lexus SUV's. Qatari's can be jerks on the road because every one of them are a reserve police officer, a lot of them go out of their way to screw with the foreigners and you cannot do anything about it except make it difficult for them to be reckless on the highway by getting in their way and going only 20 over the speed limit, they will ride within three feet of your bumper when going 20 km an hour over the limit because they want to go 40 over, often they try to go around you on the left between the rail and the break down lane nearly scraping your car. However, I do stay out of the fast lane most of the time because they are too dangerous when in their way,

Wow, a fact I did not know
Your not Military but still work for them. How do the authority's treat you because of that, worse?

I don't have to deal directly with any Qatari at work, we are guests on their base, but sectioned off, I only deal with the US military. The worst drivers are the real Qatari's who are also in the military, they are the worst of the worst, most driving expensive Land Cruisers.
G

Alaskan said:
I don't have to deal directly with any Qatari at work, we are guests on their base, but sectioned off, I only deal with the US military. The worst drivers are the real Qatari's who are also in the military, they are the worst of the worst, most driving expensive Land Cruisers.
Click to expand...

I'm sorry but it's double funny!

God, I just don't see the humor in that yet

IDK. It looks like it gets very hot there and I'm sure there are few, if any, immigrants because they would likely not fare well there. And I guess it depends on what you call crime. In the US drug prohibition seems to drive law enforcement to a very large degree. Take that prohibition away and you would likely have little crime here either.

Hey Chris, glad to see that you're keeping your speed down to only 20 over, don't get a ticket for going too slow and impeding traffic!

I've never had a ticket going too slow, only the speed camera's catch me, but it's been six months since the last ticket because I know where all of the cameras are between the apartment and work now. It's the cameras I don't know about which catch me when venturing into other parts of town I am not so familiar with, so when doing that, I just keep to no more than 10 KPH over and the camera's won't trigger then. The Qatari police never sit anywhere with radar guns, only the speed camera's give tickets, they won't pull you over.

Paul, the large majority of the population are immigrants:

Qatar has about 2.6 million inhabitants as of early 2017, the majority of whom (about 92%) live in Doha, the capital. [1] Foreign workers amount to around 88% of the population, with Indians being the largest community numbering around 1,230,000.[2] The treatment of these foreign workers has been heavily criticized in recent years, with living conditions suggested to be exploitative and abusive.[3]

The Qatari's are required by their government to work a real job for 4 years, after that they can retire, many getting several hundred thousand dollars a year from the government. Due to this, most are unskilled but rich.

Interesting, do they count points against your drivers license or just give you a monetary fine for the speed cameras ?

Locals are probably immune to the points, especially the volunteer police and low number license tags.

They have full time cops, most are from Pakistan, some Qatari's are also full time but they are not required to work more than 4 years and can retire. I've wondered if the real Qatari's are immune from points, would not surprise me. They have a problem with too many of their young dying in car crashes, a real problem because they drive like idiots too much, we (US foreigners) call it from Camel to Cadillac, in one generation their oil has taken them a long way forward.
You must log in or register to reply here.
Share:
Facebook Twitter Reddit Pinterest Tumblr WhatsApp Email Share Link