I am building a new gaming PC :D

Did you get one of those new M.2 SSDs? I just installed mine, and it's crazy fast. Not as noticeable as the jump from a HDD to a regular SSD though.

Gotta say I have about a third of the time you have into the fallout series, even then I have a staggering amount put into it. It's such a fun series.

I also just built myself a new PC, mobo died and the CPU couldn't support anything other than DDR3, so I just unloaded what worked to a friend of mine...

These new 10- series cards are also pretty nice being able to handle 4k without struggling either. Haven't tested FO4 on this build yet but it can run Dark Souls 3 on max settings in 4k with minimal drops below 60fps.

For general use, I'm running 2x4k and I have a 144hz monitor for more competitive stuff. Whenever you look into getting a new monitor, look into the 144hz ones. They're so smooth they almost feel fake...

Haa nice. I was wondering if its even worth spending the extra on a 4k monitor. i was thinking of just getting a 2k. I have not got a m.2 card yet. Maybe next payday. I dunno. I have a 2tb sata platter drive for storage. And a 500gb samsung evo ssd for boot. so I'm not too worried about it. My mobo does have 2 m.2 slots tho, and one has a heat shield.

Fallout is one of those games I find myself going back to and replaying, at least with 3 and NV. Since 4 has no lvl cap, I just kept adding onto my original file on my ps4 game. Im like lvl 135 or something on it atm, but I havnt played it since I cleared out the nuka world dlc and since the mods were so weak sauce on the ps4, and when you start using them you cant get trophies anymore, i held off since I have a few left to get. But I will probably never get them lol.

nice, Dash apple. I am not worried about wires tho, the case i have has loads of space, and theres only a half window on the top of the side panel. So none are visible for the hdd area. And As of now, I will only have 2. a ssd and a hdd.

So eager to get off work today. finishing the build tonight

Also it's worth considering long and hard, how close you actually sit to the screen, as beyond a certain point, the extra resolution becomes useless. I have PCs hooked up to all of my TVs, and generally only watch via netflix, amazon, and streaming online/downloaded stuff. For my bedroom TV, while it is 4k capable, after a lot of playing around with it, I ended up setting my PC to use the tv at 1920*1080, and 120hz instead of 4k 29hz.

My main vizio d40ud1, looks great at 4k 60hz though, and it was great to both go up in size and resolution at the same time. Not going to win any awards for color calibration, but that vizion is perfectly adequate as a monitor.

Sadly with the 4k monitors, while they do look sharp as hell up close, they don't really offer much from a distance. Plus, if you're running windows you need to use some sort of scaling on 4k to make it usable. (not 2k though!) I started at 150%, and I'm trying to scale it down to 100%... but anything beyond 125% scaling just looks terrible.

My neighbor got one of those LG 1440p 21:9 monitors, and it's one of the nicest monitors I've seen. It feels like you have a lot more real estate than a 4k monitor despite it having roughly 40% less pixels. I'm just waiting for them to go on sale so I have a nice and big monitor for work with no seams and not pushing the laptop too hard. I saw the 1080p 21:9's at the local best buy and it just isn't right.

Well It is finished! (mostly, waiting on 2nd hdd to come in mail) Got everything vital hooked up and windows installed, steam installed, all drivers for mobo, vid card ect. now to tinker with it. Here is a couple quick shots I took this morning before work, not the best but I had about -5mins to take them lol, I was on my way out the door Sorry its a little blurry. I will take a better one later with it turned on Nice build, but that cable management... If you have a BIG case, then you have space to put the cables through their holes and improve cooling and aesthetics xD
How many fans do you have in there?
Last edited: Feb 22, 2017

A couple of the cables were too short to manage around the side, that was best i could do. I am gonna see tonight if I can make them alittle nicer. In all the excitement last night I just wanted to get it up and running

It was the usb 3.0 cable that was built into the case that was just long enough to reach the mobo, and the cpu power cable is the other going across the center.

Ehh, making it pretty is nice, but cable management as an obsession is overrated. Then again, most of my cases have been stock dell and hp towers, so I never really had to look at the cables ones the case was closed. It's quite a jungle in there sometimes, especially when you stuff it to capacity, and install 4-6 drives in a small tower.

InfinitusEquitas said:
Ehh, making it pretty is nice, but cable management as an obsession is overrated. Then again, most of my cases have been stock dell and hp towers, so I never really had to look at the cables ones the case was closed. It's quite a jungle in there sometimes, especially when you stuff it to capacity, and install 4-6 drives in a small tower.
Click to expand...

No! Just No! God, no!!
A clean an ordered PC is a happy PC xDDDDDDDDDDDD 
(Ok now I stop xD but guys, please, have a bit of aesthetics sense and stop making computer's suffer )

heh, mine isnt that bad honestly. All the nice corsair power cables come with jackets on them already, and sata 3 are so small. No longer do we have to deal with the hell that was IDE ribbon cables. I am pretty satisfied with my rig

Nice work/build : D . I try to do the best cables management I can though in my build I had to cut the top corner out of my case to get it to fit as the pipes from the GPU got In the way and I didn't want to bend them at some funny angle : P

Its going under a TV unit so it will be hidden 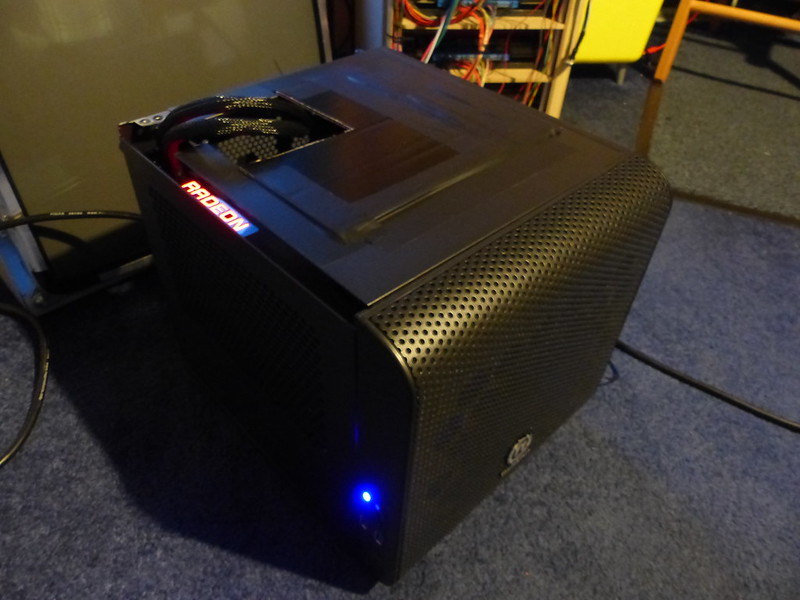