Hi everyone, nice to meet you, I'm a mechanical engineer from Boston, and I'm coming into lasers sideways from my photography hobby. I'm a photographer interested in light outside the visible spectrum or that's otherwise ordinarily invisible, e.g. infrared and ultraviolet, thermography, shortwave infrared, and lately, most pertinent to how I got here, fluorescence.

A few years ago I read a paper by Thomas Kaye and his students, "Laser-Stimulated Fluorescence in Paleontology," that showed that by sweeping a laser-generated line of light across a fossil they could generate gorgeous fluorescent photos, even in minerals that did not normally produce much fluorescence, due to the high intensities compared to other light sources. Determined to try it for myself, I bought a 405nm "100mW" laser on eBay (the paper used powers between 150mW and 500mW for their work, but I decided to start small in case the laser was under-speced) and some OD6+ FreeMascot safety glasses, and tried fluorescing the inside of my apartment. Guys, I promise it only looks this bad in fluorescence! 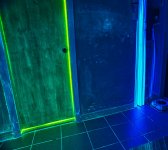 Anyway, that first experiment showed a number of weaknesses of the line laser I had bought (among them that it needs to be plugged into the wall), but I'll make a new thread for my problems, since this is supposed to be a hello thread. Nice to meet you all!

This is really interesting! I look forward to seeing what you come up with. I don't have any real background in the area but it seems like there would be tons of potential for experimentation here depending on if the selectivity of different material fluorescence in relation to wavelength and intensity would allow for interesting combos of results. Very cool idea and neat picture!
-Brandon

Hi,
Welcome to LPF here you will find info to our hobby. Enjoy and be safe
Rich

Good to have you.

Hello SUV and welcome to LPF

A couple of the stronger 405nm laser diodes are the multilode Sharp GH04W10A2GC and the BDR-209 which is a single mode, I don't know if that will make any difference for your purpose but if not then I expect UV LEDs could be useful as they can also be focused pretty well although not as well as lasers, I'm sure you know there's a lot available today, I have only used the 395-365nm for curing UV activated adhesive, anyway here's a list of some n1chia makes.
Last edited: May 3, 2021
You must log in or register to reply here.
Share:
Facebook Twitter Reddit Pinterest Tumblr WhatsApp Email Share Link