Explaining "box reflection" and how to get rid of it!

as I learned very much from the knowledge thats stored in the forum, I want to give something back.
I made some experiments and can now say that I fully understand the so called box reflection.
I do also have a way to eliminate it. Its not easy however.
But first the basics.
I took a 445nm Laserdiode and decanned it. Its a 1,6W Osram. 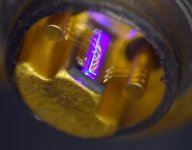 Also the Box reflection, hard to photograph. This picture is just below threshold, so actually not lasing. 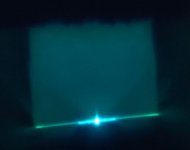 The dreaded box that kills the clean beams we all like. Hated by many..
This is a picture of the diode actually lasing. Its a 488nm 55mW this time. But the box is the same on other diodes. 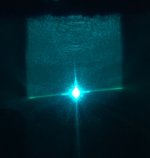 So what's actually happening? First we need to look at the source. I made some notes to explain the parts we can see and identify. 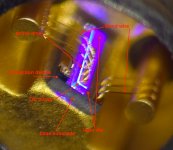 As you can see, the actual laser is just the box thats on top of the base substrate. A small bar shaped object with some electric contacts on top and on the bottom. A picture from the front will show the output of the laser die in its full glory. 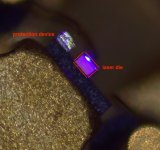 This picture is a little misleading, the bright blue spot is not actually the output of the laserdiode. Its not running at full current right now, so the laser diode is not lasing, just led action here. The current is very low, just a few mA. This makes the active area not light up fully and evenly. Its lighting more in places where the current density is higher. Regions with defects will glow less. This makes it seem like the actual lasing output is not centered, but this is not the case.

EDIT: See below, thats actually not the case here, this diode is asymmetric, however it still does not light evenly, next picture shows a bright spot far right but no light inbetween. So the bright blue spot is actually the lasing output area. 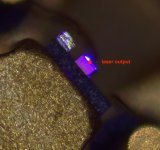 You can also see the n-substrate glowing slightly here. Actually the whole front of the laser die is glowing slightly. The bottom N portion is actually transparent and therefor the cause of our box reflection. The next picture shows a shematical drawing. The blue striped block shows the n-substrate thats transparent and beneath the actual active area.
The active area is actually the whole stripe between the n and p (green). Its just not lasing everywhere, because the current density is not big enough in these areas. 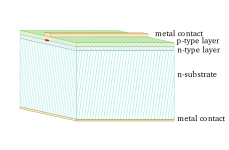 If we overlay the box reflection picture its more clear. 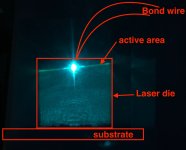 As we can see, the collimating lens is just imaging the whole crystal / laser die. As the bottom n- substrate is also glowing, its projecting the image of this. The line thats left/right from the dot is also just the active area led-ing.

So what can we do about that?
Not much, but there is a way.
We could insert a piece of metal between the collimating lens and the die. It would need to be positioned as close to the die as possible, so decanning is necessary. It also would need to be positioned quite accurately, way to accurate for me.
However if done right, it should block all light from the n-substrate thus cleaning up the beam.
I tested this, I couldn't get the alignment right but I could prove the concept. To clean up the side lines, one would also need some form of beam block on the side of the die.

There is also a different form of reflection. The laser die actually also emits light on the back side. This can also be seen in the first picture. This light is also getting out of the collimating lens. However its very faint and not in focus because the light source is actually a few mm behind the focal plane. This light spreads very fast. I can only be seen if you have a very short distance between your diode and the projection screen. If you look closely, you can see the shadow of the bond wires. This light could be reduced by painting the back of the housing black. It works but is not necessary because its so faint.

I hope everybody understands there diodes just a little better after this.

Have a nice day
Farbe

Yea I thought about a thin disc with a beam size hole maybe EDM cut so the edges are square attached to the window can and with the G8 which I prefer there's 8mm FL so plenty of space with the can intact, actually the G2 FL is 2.39mm so there's still space with the can intact for a 1mm thick disc, granted the less lateral working distance to set the disc the more precise the hole dia. will need to be, it could be attached with UV activated adhesive but would need to be set HOT maybe at low power in a handmade jig, I expect the same Chinese who set the FAC fiber into the nubm08 could do it, would probably double the cost of the diode but I think it would be worth it.

Actually if using a G8 there's room for a screw in barrel maybe 3mm thick with a center hole ( M9x0.5 ) threads and the correct size center hole which we can adjust within the modules threaded head as the beam is spreading ..............however it's not a round beam and there's thread slack so that adds a little complication, no we will need to glue it to the can and it may need to be a little rectangle slit in the masking disc.

i don't think that this would work with the can intact. The beam from the laser output is very "fast" as in having a big divergence.
The beam of the box reflection actually is not as fast. You can check this by blocking the output beam of a collimated diode. you need to block quite a bit before the box gets eliminated. So if you place your beam block on the case of the diode, the light already mixed. This will make it impossible to block without loosing power.
You would need to block the light before it "mixed" with the actual laser light.
Maybe the Chinese FAC people could do that. It would just need a little sliver of black anodized aluminium to cover the area.

Ah yes, this is why the box artifact is smaller at a given distance ( as seen on a wall ) with the longer FL G8 lens than the shorter FL G2 lens, the beam has already expanded past the facet reflection even at 2.39mm.....good point.

Excellent work on figuring out what causes that damned reflection that we all had to deal with for so many years. Sad that there's not much can be done but understanding it somehow makes it less annoying
F

I just noticed that you can even see the solder thats used to bond the laser die to the base substrate.
If you look closely at the second or third picture (beam shot), you can see that the top border of the box reflection is not straight. Its actually a little rough. Thats the solder blocking part of the light from the die. On the soldering interface, some solder creeps up onto the die. You can see the same rough border on the front shot (picture 5).

I will try to reduce the box reflection by painting the die, but I think that will ruin it.

-EDIT:
That did work. I used way to much paint (its very small!) The paint covered everything. So I tried my luck to burn the pain away. That worked and only left paint on the bottom of the die. The box reflection is gone. The lines are still there. This is obviously not the way to go for any lifetime at all.
Its very hard to photograph. But if you look hard, you can even see the shadow that the protection device (left side) and bond wires are casting.
You can also see that I oriented the diode "wrong way up". The box reflection was on top. 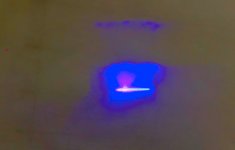 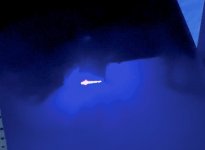 as you can see, the box is gone. These pictures are below threshold, otherwise my cam would not see anything. I also modified them to make it better visible.

You can also see that my assumption that the diode laser smack in the middle is not true. it actually is asymmetric! Thats the first diode I notice to be asymmetric!
Last edited: Jun 4, 2021
L

Ever hear of Spatial Filtering? It takes care of this nicely. You use the laser your correcting to burn the pinhole in situ.

Yes i know, planters has a nice video about that.
However the added complexity is to much for a pointer. One could also correct the singlemode diodes with a 1:3 beam expander on the wide axies. This would give you a true dpss like beam. But as I said, to much hassle for most people.

Hey LSRFaq good to see you back

Farbe2 Thanks for this thread. I like seeing these kinds of threads again. Good to see in-depth observations/research even if it turns out to not be as practical as we would like it to be.

Nice work man - this is next level.

Thanks, this was very interesting.