Effects of a class 2 red laser on peripheral vision?

Hey guys just wondering can a laser still damage your retina/eyesight if it's in your peripheral vision on the side of you shining at your eye and not focused directly in your eye? I had a stupid coworker standing to my right pointing a class 2 scanner towards me and after like 5 seconds I noticed a flashing red light on my right side but never looked directly at it. What is your experience with this kind of thing? Figured the forums might have some light to shine no pun intended. I attached a picture of the laser. Please and thank you!! 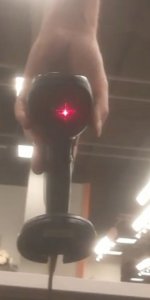 The hell are you asking us for? Go see a professional.
You posted this before. https://laserpointerforums.com/threads/eye-damage-from-1mw-630nm-red-laser.108515/
Z

Unown (WILD) said:
The hell are you asking us for? Go see a professional.
You posted this before.
Click to expand...

ZJJJAY said:
Because it's under the LASER SAFETY thread so obviously somebody might have a good knowledge of the subject🤦🏽‍♂️ and I'm asking about peripheral vision in this post not a reflection like the last one
Click to expand...

Don't get smart with me. Paul gave you the answer in your other thread. It's your own fault for not figuring out the answer is the same for both your peripheral vision and your central.
F

Thats an easy question to anwser.
These handheld QR/Bar code scanners are designed to be save in every circumstance.
Class 2 actually defines this very well.
Its classified to be safe for looking into it for short periods of time, with the addition of "dont stare into beam". So your described exposure to it is completely safe.

However your question if a different laser could be unsafe even if only peripheral: clearly yes, but it depends. If your laser is powerful enough, even a hit to the skin could be dangerous. Every laser of class >2 is considered dangerous for even short exposures.

The general principal for eye damage is that the laser "burns" (do to heat) a spot on your retina, so if the power is high enough and the duration is long enough, it will damage the retina. So even side radiation will/could burn your retina, however is quite unlikely. As the angle gets more shallow, the pupil will let less and less light inside your eye, meaning lower power thus lower likelihood of burning.

These Barcode scanner are designed to be save. They have class 2 because you could in theory hold the scanner directly to your eyeball and try to capture all the light thats emitted. This would result in the biggest energy captured on your retina, thus creating enough heat to burn your retina. So the manufacturer will use class 2. Because the beam is quite divergent (meaning it expands fast), the cross thats projected will be much bigger at a distance, spreading the power to a much bigger area. This means if you are any significant distance away from the source (even 5"), the power is very low because not all energy is captured by your pupil. This explains why they need to specify "dont stare into it" but it also explains why ist safe in your situation.

Unown it right (but could have reacted way better), if you have any problems, go see a doctor, we are no specialists, however class 2 is a dead give away thats safe unless you are really reckless with it. (Trying to capture the whole beam with your eye at a short distance essentially pressing your eyeball against the output window)

Any truly 1 mW laser is considered eye safe as you will blink if hit in the eye before damage can occur. Your blink reflex is about 0.25 seconds. Sounds like the laser in question didn't even hit your eye.

"If you think you need medical help or attention for an eye injury or any other medical problem, you probably do."
"If you have been hit in the eye with a laser and feel you have suffered any type of eye injury as the result of an accident with a laser that may need medical opinion or treatment,
go to a hospital Emergency Room and/or consult a qualified Board Certified MD Ophthalmologist ASAP.
LPF is a laser hobbyist website, not physicians, and cannot give any medical or legal advice.
No professional medical or legal advice is available or possible on LPF"
For additional information see laserpointersafety.com here:
Laser Pointer Safety - What to do if you are hit by a laser pointer or laser pen