Hi everyone,
I just wanted to share a new edition to my laser collection.
And its a big one, and it's courtesy of Chris (Alaskan).
I wanted this laser a few years back when I first saw it listed on eBay.
Unfortunately it never happened, firstly because Chris's circumstance had changed,
and secondly I couldn't honestly justify spending my university grant on a laser.
Well, to cut a long story short I got a message of Chris to say I had a parcel on it's way.
Imagine my shock when it turned out to be this laser.
So I just want to take a time out on this thread and say thank you.
He not only sent me the laser but also went out of his way to assist me in receiving and powering up the unit.

This is the MGL-W head from CNI, so it is a beast even before powering it on. These heads are fitted with a large heatsink and two internal fans to dissipate the heat away from the TEC cooled components. These heads are capable of handling 20W of 532nm comfortably. So thermal stability is no issue whatsoever. The head according to the spec sheet is 6.1kg in weight. I haven't measured it myself, but I don't doubt it for a second. For anyone wanting to learn more about the host.
Here is the PDF: http://www.cnilaser.net/PDF/MGL-W-532.pdf

The PSU is what appears to be a older/discontinued model of the FDA drivers.
It comes with a safety interlock, a key switch and an emergency stop button for safety purposes.
The PSU is only compatible with 110V, which at first presented a problem for me in the UK. Cyparagon had ways of getting around this, but 2000W transformer solved all my issues simply and effectively.

Now for the actual output.
First thing that comes to my mind. Bright!
Unless you've seen high power 532's before, nothing can prepare you for the shear intensity of 4.25W of glorious green photons.
I have a 500mW 532 outputting close to 600mW, and I thought that was bright. I have 4W NUBM07's, and 7W NUBM44's and they don't compare either.
It may not be my most powerful laser, but it is my brightest... by a long way. And the power burns anything it touches similar to a NUBM44, just slightly slower.
I managed to burn through gloss white laminate which was reflecting most of the light.

Just for fun I worked out the lux equivalent to sunlight (130,000 lux). The laser has a 5mm guassian dot and a divergence of 1.5mRad. So at 100mm from the aperture these are the values for the dot intensity. Luminous efficacy was fully counted into the equation and so was its true output of 4.25W.

These values might actually be higher, as I haven't actually measured the beam diameter properly myself. The spec sheet states ~4mm. So taking this into account the intensity will be much greater than stated.

So, bright it is.

Here are some pics for you to enjoy.
I'm yet to actually test this laser under near scotopic conditions.
I've tested the laser in broad daylight, and I've tested it under overcast conditions. Even with the sun glaring perpendicular to the beam. It was visible enough to get photos at the right angles. And that was a glorious bright sunny day. 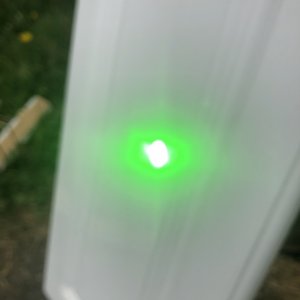 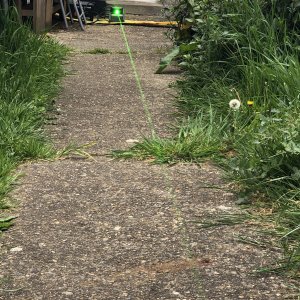 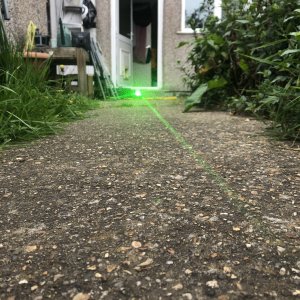 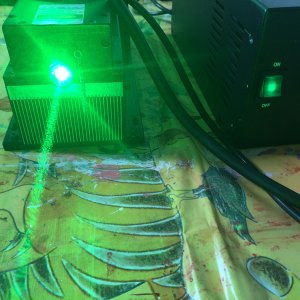 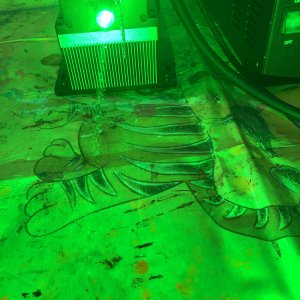 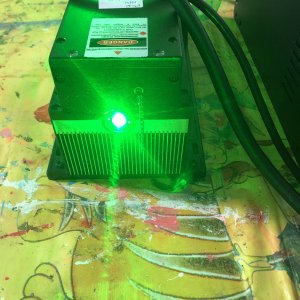 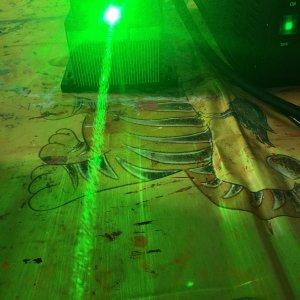 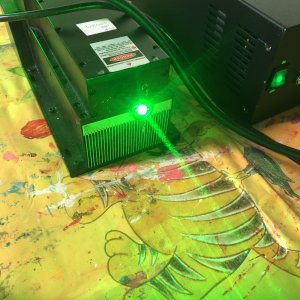 I hope you like it, and thanks again to Chris.

Crazy! Amazing machine. I'm sure you'll have a hell lot of fun! Any shots @ night planned?

I’ve got to be very careful where I am. I live on the outskirts of London, and have busy air traffic so sky shots are pretty much out of the question. My garden also has four neighbours gardens that back up onto it in all directions. So considering it’s brightness, it is sure to attract attention. Bare in mind a similar laser is used as a beacon at Greenwich to mark the meridian line. Conditions vary it’s effective range, but it can be seen as far as 60 miles away.

I had a choice of letting someone else have fun with it, or putting it in a storage conex for who knows how many years in Alaska which would have been a shame, as I don't know when I will go back there again. Remembering Curtis was interested in buying it, I decided to pay forward something nice for other things people have done for me in the past, so shipped it without his knowing, he got it powered up the day before his birthday, so it turned into a birthday present.

Curtis has done a lot for many people in the forum, as others have, but I particularly liked surprising him, due to his former interest.

Yes, and I’m eternally grateful for it. It is an amazing laser.

That's a beautiful beast of a gift you've got there Curtis, 4+ Watts of 532nm green is certainly impressive for sure!
That's very generous of Chris, but most of us here already know how generous of a guy he is!

Thanks for sharing this incredable laser with us.

4W+ is definitely is impressive Jeff. I know you have a goldenstar unit that’s overspec, so you know what it’s like. As for Chris, he has shown generosity a lot on this forum. He’s a great guy.

Thanks Robert, I shall.

I am so happy you are having fun with it, I sure did. I thought about bringing it to Qatar, but decided it's too risky for me to have it here, I'd only get into trouble with it pointing up into the sky. Things are different here in Qatar, so better I removed the possibility of the temptation and sent to you. PS: I'm only a part time good guy, just ask around

There is no way it would be missed if you had of shone it into the sky. So unless you have a safe area to perform a sky shot then it’s best not to do it.

Yep, I'd likely have a bunch of these guys to deal with and get kicked out of country. 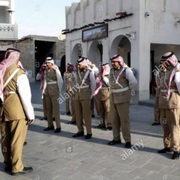 You have piqued my envy. That was an extremely nice gift. Congrats, Curtis. And very nice of you, Chris.

Yes indeed Paul.
And I have to agree Peter.