Building a orange (613nm) Laser from scratch with off-the-shelf parts (and for cheap!)

now that i have finished my RGB build, i am in search for a new project.
A orange pointer comes to mind.
As anyone knows, orange and yellow is still the holy grail of a wavelength collector.
They are very expensive for low powers. One option would be DPSS (589nm or 594nm), even a PR:YLF DPSS could be made (607nm). However the crystals and output couplers are not cheap and some even need to be custom made. The alignment would also be a pain in the butt.


I did make some calculations and come up with a idea.
This would only need around 200 to 250€ worth of off-the-shelf parts, and would make up to 100mW orange.
Wheres the catch? It would even be easy to build, no real alignment needed. Just a casing that's air thight and a heatsink would be needed.
I think this could even be build to be portable or inside a (rather thick) pointer.

Some people will call me crazy, for this kind of money it can't be true.
However it IS!

I would start with this diode:
HL63163DG
Its a 100mW 633nm Ushio diode. However that's not orange.
What can we do to make it orange? External cavity? Way to complex!
A look inside the datasheet reveals a nice property of the Aluminium-gallium-indium-phosphid laser diode.
It drifts with around 0,17nm/°C!

How cold can we get it to reach something usable without resorting to liquid nitrogen or something special?
I spend a day looking at tea datasheets and 120 degree C below ambient should be reachable with around 50W- 60W of input power.
This would bring us from 25°C ambient to around -95°C. Or from 633nm to 612,6nm! (120°C * 0,17nm/°C = 20,4nm)
That should make a huge difference in perceived color.
I did try to cool a normal 638nm diode to only -45°C and it got way oranger! However this experiment only got me to around 626nm.
Thus confirming my theory.

There is only one challenge: keeping the heat out or the cold in.
I would go with a sealed case that's under vacuum. Should be easy enough to do as its only one bar that we need to keep out. This would also eliminate all condensing problems and would result in way lower thermal losses. The TEC will only pump around 0,5W at this thermal difference! So we need every bit of insulation we can get. Vacuum seems to do the job.

Costs:
Diode: 170$ at avnet, minimum purchase quantity: 10
TEC: i don't know jet, i will contact a supplier if i can get enough people interested, but i don't expect it to cost more than 100$
Output window: around 10$ for a pice of anti reflex coated glass
Collimator: same as everywhere

So we would only need to make a case, everyone with basic hand tools should be able to make one.
A vacuum pump to get the air out, a cheap one should be enough.

My question is:
Is anybody interested to order Diodes and Tecs?
If we make the parts a group buy. I think it would also be possible to do it as a "kit".
Just add your own case, and colli and enjoy the pure orange beam of your dreams!

How does that sound?

Even if we get the cheap Sharp 185mW / 120mW Oclaro diode from DTR, it would still be possible to get the wavelength down to 618nm.
The expensive special 633nm diodes will give 5nm more.
Using online calculators, it seams like the response curve of our eyes will make every nm count.
Or: every nm will give us a lot more orange.
The difference will be much more from 618 -> 613nm than from 638 -> 641nm.
So i would go for the better diodes. IMHO it would be worth it.
The tecs will not be as dirt cheap as some import chinese ebay stuff. Thats because the TEC needs to be really good to pump this "much" energy with these high thermal differences. However i will ask some manufacturers tomorrow.

I've a made crude 3 layer TEC stack for this exact purpose, and tested it with an unknown ~635nm diode. Bottom TEC got fed 12V, middle 5V and top 3.3V. The stack and diode was then sounded by foam material. The wavelength shift was barely noticeable though. Maybe the diode was not a good example, or the the temps needed to go way lower. 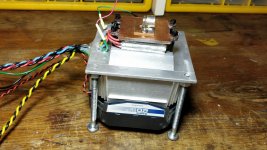 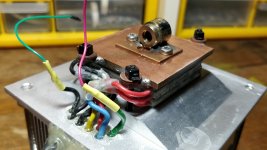 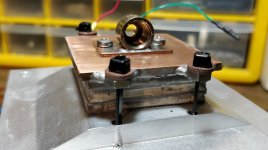 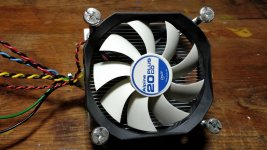 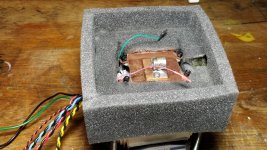 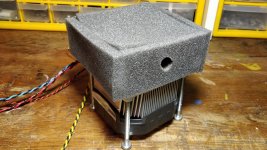 FYI
here is one of the smallest listed at 10x10 cm 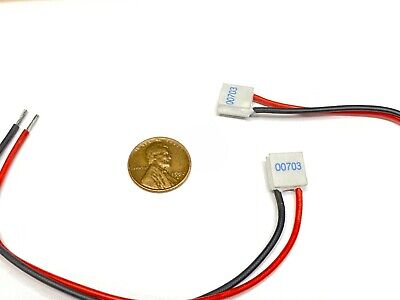 Nice build!
Did you measure the temperature?
I did make some tests for a cloud chamber, I could not get below 50°C with 3 stages. I assume that commercial multistage tec modules are way better that this simple "stacking".
The normal one stage tecs are usually made of a material that's optimized for 50°C hotside temperature.
This material is very inefficient at lower temperatures. This limits the amount of temperature difference we can get.
Using pre stacked elements will reduce the losses of non optimized materiales and losses do to cabling bringing in heat.

I think about something from a Chinese supplier.
Namely about a 4 stage tec . This would get us 120°C difference with 0,5W heat load (as produced by the diode at 100mW output) and 27°C hotside temperature.
Last edited: Aug 25, 2021

No temp readings, sorry. This build was purely out of curiosity, and because I had all the parts scavenged from other junk. I would like to do more work with it though. I found condensation to be a big issue, the laser and optical path really should be hermetically sealed.
F

I would build a box and vacuum it down. This would give near perfect thermal isolation.
I think it would be perfect if one could polish the diode mount and case inside to a mirror finish. Everything out of aluminium should work.
The mirror finish would help to suppress any thermal radiation that could go from outside to the diode mount.
Using a 3mm thick diode window should be enough to keep the air out and still letting the photons out.
In case it wasn't obvious: vacuum inside would also mean no moisture inside, so no condensation to worry about.

I posted a link about a year ago of someone who pulled this off. Not only does cooling off the diode shift the color but apparently putting it under immense pressure can shift a 638nm all the way into the yellow. (If i remember right it was like triple the pressure inside the barrel of a rifle like 48kpsi or something ridiculously dangerous sounding) I dont recommend trying to pressurize anything that can blow up ur house/lose a hand but if u can get it cool with the tec inside a pressure chamber that has a window u could try to see if u get a few extra nm outta the experiment. Im really gassed to see somebody get around to trying this out great job dude keep it up and good luck! Ill try to find the link once i get a minute to go thru old posts
E

Here is a member who bought a DPSS 607nm orange lab laser described as pure orange and photos of it https://laserpointerforums.com/threads/orange-607nm-170mw-kvant-labby.103660/

Here is a video by a guy who brought a 638nm P73 diode down to 608nm with cryo set up as TECs could not cool the diode enough to get to orange. See thread: https://laserpointerforums.com/threads/liquid-nitrogen-cooled-oclaro-638nm-laser-diode.92894/

I know the video from planters.
His video shows the same predicted 20nm wavelength shift which is nice. Planters also mentions at around -100°C (or 618nm) that its clearly orange.

Story pyro himself measured 610nm, which was clearly orange. 613nm isn't that far away.
Also, laser manufacturer for example CNI also calls 491nm "blue" or 555nm "yellow". i would not agree with that.
To my eyes comparing 660nm with 638nm, 638nm is clearly more orange. so 613nm must be even more orange.

Regarding "tecs are not enough" just look at the datasheet, 128°C below ambient is possible. This would result in around 613nm as i mentioned. However i also found a diode which shows 0,25nm / K and another one that mentions 0,3nm / K which would result in 599nm or 605nm respectively. However these diodes are only 5mW / 10mW.
I think its doable and i will try it.

While tec at 128°C below ambient is possible you need to factor in how much continuous heat the diode will introduce to the tec which can overwhelm the tec's ability to absorb the heat.

Test's that tried to use tec's to cool CPU's failed in all cases because of how much continuous heat the CPU's were producing which overwhelm the tec's ability to absorb the heat and the CPU temps climbed above their max allowed temps.

This also happened if cooling fins were added to the tec's "hot" side with a fan blowing across it.

farbe2 said:
I know the video from planters.
His video shows the same predicted 20nm wavelength shift which is nice. Planters also mentions at around -100°C (or 618nm) that its clearly orange.

I think its doable and i will try it.
Click to expand...

Best of luck with the project.
Look forward to seeing your results.
Last edited: Apr 12, 2021

May be worth looking into 622nm diodes. They need to run on a tec by default basically, though not sure how much they cost. Could be an option to give some tolerance on thermals.

607nm is pure orange, though I'd also expect 613nm to be just a different shade of orange. I wouldn't expect it to be possible to mistake for red just 6nm off my labby.

Curious to see how you do. I want a proof of concept before buying anything, but this is interesting to me if you can prove it will work.
E

In my experiments I ran the diode just a few mA over threshold to give it the best possible chance, not much excess heat to pump.
I also tried it on a greenish-cyan GH04850B2G diode. It got more blue, but also not huge shift, but more noticeable than with the red diode. I'm not sure if I ran the stack at the optimal voltages, I just did what others do for vapor chambers, using a PC power supply with the convenient voltages available. I have a feeling that it can be better.
You must log in or register to reply here.
Share:
Facebook Twitter Reddit Pinterest Tumblr WhatsApp Email Share Link