A question for those knowledgeable about radioactivity

Density isn't what blocks radiation. Mass is. A brick will stop more gamma rays than a 1/4" lead plate. Lead is only used where you're picky about thickness.

Cyparagon said:
Density isn't what blocks radiation. Mass is. A brick will stop more gamma rays than a 1/4" lead plate. Lead is only used where you're picky about thickness.
Click to expand...

hmm, mass is only part of the story.

Density the of a given material matters a great deal more when we talk about shielding efficiency. Density causes the radiation to attenuate faster as denser elements on the periodic table generally have more elections per unit volume. You need far more concrete than you ever would Pb/U238 for blocking a given radiation source. | example 1.4MeV Gamma is stopped by 75cm of Concrete vs only 14cm of Pb

Density and mass both must be taken into account. (equally as important):beer:

Radiation shielding is an interesting developed and evolving technology.

"The effectiveness of a shielding material in general increases with its atomic number, called Z, except for neutron shielding which is more readily shielded by the likes of neutron absorbers and moderators such as compounds of boron e.g. boric acid, cadmium, carbon and hydrogen respectively.

Graded-Z shielding is a laminate of several materials with different Z values (atomic numbers) designed to protect against ionizing radiation. Compared to single-material shielding, the same mass of graded-Z shielding has been shown to reduce electron penetration over 60%. It is commonly used in satellite-based particle detectors, offering several benefits:
1. protection from radiation damage
2. reduction of background noise for detectors
3. lower mass compared to single-material shielding

Designs vary, but typically involve a gradient from high-Z (usually tantalum) through successively lower-Z elements such as tin, steel, and copper, usually ending with aluminium. Sometimes even lighter materials such as polypropylene or boron carbide are used.

In a typical graded-Z shield, the high-Z layer effectively scatters protons and electrons. It also absorbs gamma rays, which produces X-ray fluorescence. Each subsequent layer absorbs the X-ray fluorescence of the previous material, eventually reducing the energy to a suitable level. Each decrease in energy produces bremsstrahlung and Auger electrons, which are below the detector's energy threshold. Some designs also include an outer layer of aluminium, which may simply be the skin of the satellite.
The effectiveness of a material as a biological shield is related to its cross-section for scattering and absorption, and to a first approximation proportional to the total mass of material per unit area interposed along the line of sight between the radiation source and the region to be protected.
Hence, shielding strength or "thickness" is conventionally measured in units of g/cm2" ~ from: https://en.wikipedia.org/wiki/Radiation_protection
Last edited: Jan 22, 2018

Seoul_lasers said:
You need far more concrete than you ever would Pb
Click to expand...

far more thickness, sure, but not more mass. a pound of concrete is just as effective as a pound of lead. That invariably means a larger volume of concrete, but concrete is a LOT cheaper than lead, and so lead isn't necessary.

Three basic rules to protect yourself from ionizing radiation:

2 and 3 are basically free and work. Living on a farm has convenience. And too, if you have sufficient quantities that truly require shielding, you're certainly not at the hobbyist level.

The point is I cant keep a pile of bricks tucked away in my closet as easily as I could a plastic and lead lined ammo box. Its it strictly necessary? Probably not, but there isn't really an upside to increasing the radiation in my room, especially over a long timeframe.

Honestly though now that I think about it, its probably a lot cheaper to just get a bigger steel ammo box, cut up some cheap sheet steel and line it with that. I'm not exactly storing plutonium here. Ill probably still put a plastic layer to avoid any potential braking radiation.

You could always go this route. You know in case you come across a teletherapy capsule. 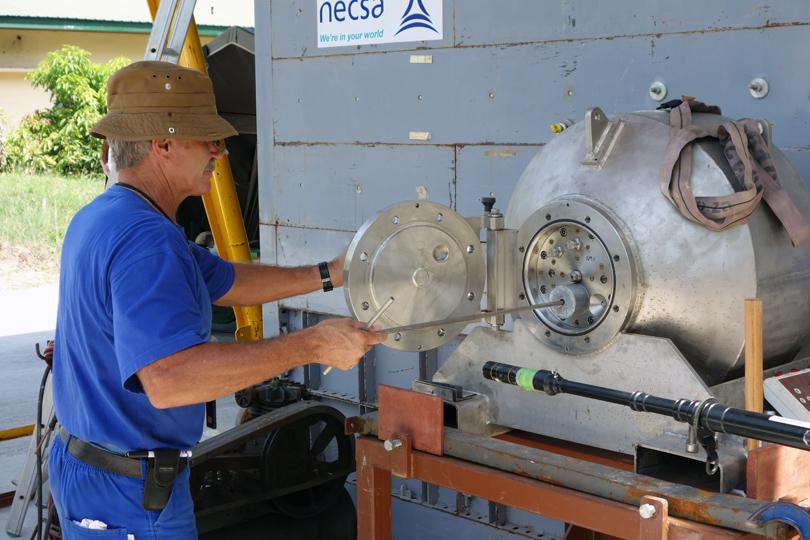 far more thickness, sure, but not more mass. a pound of concrete is just as effective as a pound of lead. That invariably means a larger volume of concrete, but concrete is a LOT cheaper than lead, and so lead isn't necessary.
Click to expand...

No, as explained by encap not at all.
A pound of concrete does not equal a pound of lead. Sorry! Pb's Z value is many times that of concrete. You need less Pb to do what given amount of concrete roughly 1:5.4 Ratio.

As was discussed in the radiation theory section, the depth of penetration for a given photon energy is dependent upon the material density (atomic structure). The more subatomic particles in a material (higher Z number), the greater the likelihood that interactions will occur and the radiation will lose its energy. Therefore, the more dense a material is the smaller the depth of radiation penetration will be. Materials such as depleted uranium, tungsten and lead have high Z numbers, and are therefore very effective in shielding radiation. Concrete is not as effective in shielding radiation but it is a very common building material and so it is commonly used in the construction of radiation vaults.
Click to expand...

Isn't density the amount of mass for a given volume? Thats one of the reasons lead is commonly used for shielding, it has a high mass to volume ratio (and its cheap. Its all application specific too, like you wouldn't need to line an underground bunker with lead because a few meters of soil/earth are sufficient to stop radiation, but you have to use lead/depleted uranium/tungsten for small containers because those are some of the few materials that have the density at those small volumes to be effective.

Density blocks gamma radiation basically, it's just the amount of mass per square meter of ordinary materials that makes the difference. Since lead is very dense and inexpensive it is often the material of choice, especially for small setups. On larger installations one can rely on thick concrete walls and such instead.

Alpha radiation is very easy to block as it is, no special materials required there.

But with beta radiation things change a bit - high-atomic-mass materials like lead don't really work that well here. They do block the beta radiation, but re-emit part of the energy as x-rays which are still ionizing and dangerous.

Thus why my tritium light keychain is completely safe in its plastic housing. Trying to explain that to classmates however....

Addition: Anyone here ever build a cloud chamber? Been meaning to try building one using cascading thermoelectric coolers. Most of the instructions I find online use dry ice but thats just not convenient to get here.
Last edited: Jan 22, 2018

Rather than double posting 1 minute apart, you can use the edit icon on the bottom right of your last post to add more information. Double and triple posting is frowned upon here, and it is not a respectful way to get your post count up.

paul1598419 said:
Rather than double posting 1 minute apart, you can use the edit icon on the bottom right of your last post to add more information. Double and triple posting is frowned upon here, and it is not a respectful way to get your post count up.
Click to expand...

My apologies. I forget about the edit button, not trying to get my posts up.

So, where are you that you can't get dry ice? I thought that was available just about everywhere, years ago. It's usually quite cheap too.

At least where I live l, the only way to get dry ice is to order it from a industrial gas supply company (Praxair in my case) its not terribly expensive, but it takes them about two weeks to order some in, and the last time I got some I got treated to a bitching fest about how inconvenient it is for them to ship just a few pounds to an individual, so Im not particularly keen on ordering it again.
You must log in or register to reply here.
Share:
Facebook Twitter Reddit Pinterest Tumblr WhatsApp Email Share Link