Hey guys, it’s been a little while since I’ve posted anything. The past few months have been a bit crazy as I’m sure they have for all of us. I’ve made a few new builds during my time away and I’ll try to get them posted as I find the time.

Here is my 405nm BDR-209 build. The build was definitely one of the easiest ones that I have done. I purchased the diode from DTR’s Shop with a ACS1500SE preset to 520mA. I used an Aixiz Heatsink for the housing. 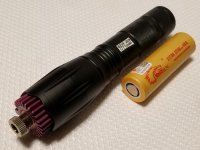 After removing the LED I used the left over space to thermal epoxy the driver to the inside of the threaded LED housing. (It does have a bit of an angle to it). 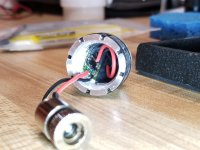 The next step was to get the diode into the heatsink and thermal epoxy it to the housing. 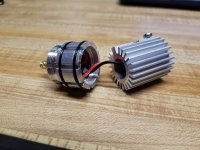 This was done by clamping the parts until the epoxy cured. 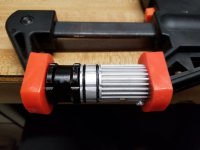 Aside from putting it back together and adding a fresh coat of paint, it's all done! 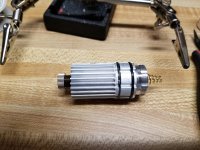 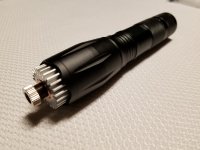 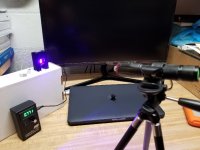 Here are a few long exposure night shots of the beam! (Turning up your screen brightness also helps). 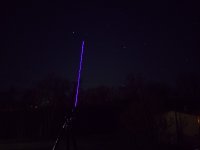 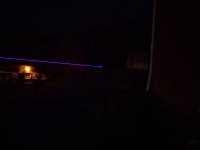 While I'm sure that I can get more power output from this, I'm satisfied (and a little afraid) with its output. The tight beam is able to light matches at 25+ feet away and since the wavelength goes beyond the our visible light spectrum, its much more powerful than it appears to be. So in addition to lighting matches and burning things, while experimenting with how this 405nm laser is reactive to neon (like a blacklight), I remembered that I had transition safety glasses which turn into sunglasses when exposed to (UV) sunlight. So I ended up making a video about how this wavelength passes through some laser safety glasses. I truly wasn't setting out to create a PSA on the subject (even though that's what it appears to be). But maybe someone can find the information useful. It really is an interesting wavelength.