I am currently trying to tune up a large fast-axial-flow laser that had been sitting around for years and I am looking for advice, I have had a hard time finding guides on this that have much detail. I have re-aligned the mirrors well enough to bring it back to just over half power (~500W so far, max is 1000W CW, 2500W pulsed) but the beam is super lumpy with multiple hot spots, not just one distorted spot. I have heard that it is difficult to get a perfectly homogenous beam from large bore CO2 lasers but this seems really bad. I've attached an old image of the machine before it was set up, but I'll post some images of the inner workings tomorrow (I left my phone at work sorry).

I have currently been adjusting the mirrors to optimise output power (sensed by an integrated sensor that receives the small amount of beam that comes through the "back mirror"). I have been able to bring all the spots together with adjustments but the output power seems much lower when I do this. Is there some technique that involves keeping all the spots together and then making adjustments to raise the power? Also is it possible that the sensor could be inaccurate or not calibrated for the mirror?

I have heard that it is difficult to tune a CO2 laser to a good quality over its entire power range and I have noticed that the beam shape changes so I have been tuning it at the highest power that is stable since I believe that is what we would be using. Is this a good idea? It's a bit dangerous and I've already burnt myself since you have to reach over the beam to make adjustments, and it would be a bit of effort to enclose the beampath since the cabinet door would have to pass through the area I would have to build the enclosure in. It would be nice to know if it could be tuned at a lower power since it would be easier to make a target for visualising the beam pattern and I wouldn't have to use welding goggles over the top of the laser goggles.

There is possibly electrical problems with it too, when running at more than 85% current, one discharge in one or both of the 2 tubes will flip around and flow through the opposing discharge path (the layout is two parallel tubes each containing two back-to-back discharge paths, pretty standard for this size). I don't think the gas mixing valves have been touched but that could be adjusted. I have replaced the vacuum pump oil since that seemed a little dark, but I might replace the oil in the roots blower since it has been sitting around for so long and could be introducing some gas contamination. I have not removed any of the resonator mirrors to check their internal surfaces but they were apparently replaced within the year the machine went into storage.

Sorry for the rough and rambly first post but if anyone knows about this stuff, or could guide me to good resources for fixing my gross lumpy beam then I would be very thankful, even just suggestions for things to try would be great.

For background; the laser is a self-contained unit that feeds into a CNC cutting machine, the previous manager (we now operate without a manager lol good riddance you career fraudster) bought it cheap 5 years ago since the previous owner cut wood and never cleared out the catchment tray so this caught fire and burnt out all the wiring around the head assembly, might have been an insurance job. I have replaced all the head carriage wiring and sensors at great effort since the documentation was rather poor. They also left the grease port open to debris on the 50mm ballscrew that drives the main axis so that was just full of shards of ball bearings and I had to re-ball it like holy fuck how did they not realise the horrific grinding sound it was making was a bad thing. I don't see how they could have screwed up the laser though, since it was self contained and professionally serviced, I feel like it should still be in fine condition aside from some bumps in transit.

Here's some photos of the tubes, it takes a long time to pump down and start up so I'll wait until I have a better strategy before I start it again. The melted region on the left of the concrete shows roughly what the beam distribution is currently. It's basically a row of 5 dots with the lower dots being too weak to melt the concrete. The line of dots is parallel to the fold mirrors, I don't know if that is relevant though, and they are not adjustable.

Got the mirrors aligned! With it being close to alignment and without an external alignment beam I found the best way to bring it back was to set the power just high enough to cause a visible thermal glow on concrete and then search around. The refraction/reflection pattern I had from the beam running into the tubes had an obvious centre so once you get a feel for the direction to move things it is actually fairly easy. Top row on the concrete is the roughly aligned beam (before I jacked up the laser unit to not clip into the mirror mount on the lower right corner).

I still have a problem with the discharge flipping around at high power after running for 30s or so (second picture). This happens at above 90% power output, I don't trust the power or current sensors since they seem poorly calibrated but this is supposed to be 900W. Anybody have an idea what could cause this? A rough calculation from the regulator pressures and the restrictor settings should put the gas composition around 53%He 40%N2 7%CO2 which seems a little high on the nitrogen, could it be the gas? I am really hoping it is not electrical. 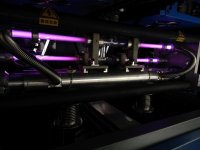 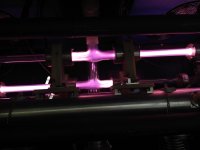 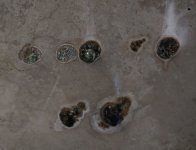 Amazing laser!
I don't have experience. However I would think that it should be easy to change the gas mix and turn it back if it does not make things better.

And I don't think that this issue is related to electronics. Generally speaking: High power (voltage/current) electronics either work or blow up with a Big Bang.
So if the control electronic is able to strike the tube and keep a discharge going, there is likely nothing wrong with it.
You must log in or register to reply here.
Share:
Facebook Twitter Reddit Pinterest Tumblr WhatsApp Email Share Link