Time for my yearly return to the forum... inquiring about NUBM31T

Okay, so I haven't posted at all for over a year, because of more pressing real life issues. I didn't even have the time to conclude my 7W build, on which I was working last year. Recently I've wondered what had changed in the laser hobby in one year, and as soon as I hit Google with the proper inquiry, I was in for a HUGE surprise. I'm talking about Styropyro's video about the NUBM31T diode array. That thing is a beast!

The idea of having a 95W diode array is really exciting, so, has anyone here experimented with it? What kind of battery does it require? I noticed several arrays for sale on Ebay, all with the same driver. Is that appropriate to reach full power? I'm asking because Styropyro did not use it, and instead he made his own.

The cooling method used by Styropyro has left me... a little perplexed. A hunk of aluminum isn't really an efficient way of dissipating heat (otherwise, CPUs would not require complicated heat sinks), but I understand he was doing that mainly for show and for the challenge of fitting that big array into a relatively small host. If I were to make such a build, I'd use a CPU heat sink to cool it.

Last but not least, the most important aspect about any build: safety. I suspect that my OD4 Eagle Pair glasses, which I used with my 3W Dominator (remember Blord?) wouldn't be up to the task to protect my eyes against the diffused light of a NUBM31T array. What kind of glasses would you suggest?

OD4 are good for looking at the spot of lasers 10Ws and under, on a nonreflective surface.

Get an OD 6 Eagle Pair which is good for looking a the spot of lasers 100W and under, on a nonreflective surface see: https://www.survivallaserusa.com/Safety_Goggles/cat1667093_1527285.aspx

Thanks, I'm definitely gonna get a pair of these: https://www.survivallaserusa.com/Ea...rd_Laser_Safety_Goggles/p1667092_7862033.aspx
Now, about the driver: does this model perform well?

EDIT: I've been pointed to etter choices for safety goggles: https://www.thorlabs.com/thorproduct.cfm?partnumber=LG12C or https://www.edmundoptics.eu/p/arg-lasershield-safety-goggles/41382/ These are OD7.
Last edited: Nov 8, 2020

Devil_Master said:
Thanks, I'm definitely gonna get a pair of these: https://www.survivallaserusa.com/Ea...rd_Laser_Safety_Goggles/p1667092_7862033.aspx
Now, about the driver: does this model perform well?
Click to expand...

IMO I don't like its design at all. It uses an extremely cheap singular electrolytic for filtering and it has the rows in series meaning that If a LD in any row fails closed the bank is instantly gonna get overvolted and overcurrented. I could design an appropriate high-quality driver for it but the extremely low demand that exists for it simply isn't enough for me to spend my almost non-existent spare cash on prototyping a driver for the bank. Talking about drivers small update: PCBs have come for my run of 400mA boosts with revers pol protection, Still waiting on the ones for the 3A boost and their respective components. 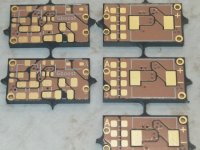 I'm using one of those drivers to power mine. The advertisement for mine stated that the TTL input was active high but in actuality it is active low which is dangerous as it will turn on as soon as the power supply receives 12V. I ended up driving the soft start pin with the output of a voltage divider, using the input to R1 as the TTL input and placing a 100nF cap in parallel with R2. I found that the original TTL input only gave me about 50 points of resolution out of 255 when it came to current control where as my scheme achieves around 150 points. You can also control the maximum current by changing R1 with this method as from what I recall the trim pot on the board has a narrow control band as well. A R1/R2 of 5.6k and 5.6k with a 3.3V reference caps the total power to around 50W for me. I don't think the internal logic likes to see anything above 2V though.

If a diode fails does it short or break the connection?
Last edited: Nov 8, 2020
L

I think that you can easily wait another year because the thngs are never done so fast. I played with both PLPM4 and 31T (picures are in the corresponding thread) and they both cannot be considered as lasers due to bad focusing. It will take a lot of work and time to find the way to focus all these beams to infinity. So today as such they are arrays only of use for close cutting or phosphor pumping.

The timeline on LPF:
1. Styro sees new array and makes YT video about it making hype but not giving neither type of driver no voltage/current data, not even diameter of the Al hulk used as HS.
2. One to 2 years pass until array price goes down (like with NUBM08 from 800 to 150 after 2 years) and LPF members start to buy and test it in quantities (because only with one you cannot get a performance statistics)
3. One more year at least to design and manufacture proper set ups to make a working prototype with this array
4. Finally conclusion if one can make a laser out of it or not.
J

Has anyone tried something as simple as a beam expander? (Or reducer in this context)
D

Junkers said:
Has anyone tried something as simple as a beam expander? (Or reducer in this context)
Click to expand...

Alaskan has used a lot of beam expanders

I have done it with the nubm05 block but I killed my plpm450 and it was not as well collimated as the 05 block anyway. It could work for short range, very short such as dozens of feet and to make a crude cluster but not a traditional beam.

The factory integrated GBall focus is good on 05 diodes and many but not all 06 diodes and this block has good focus for Gballs ( Yes I inadvertently burned my white ceiling just a little, I will paint it. ) but the 08 diodes I have had many with awful factory focus so 05 which is also the least...
laserpointerforums.com 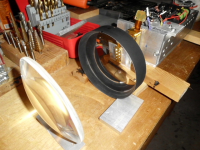 Gianakakis said:
IMO I don't like its design at all. It uses an extremely cheap singular electrolytic for filtering and it has the rows in series meaning that If a LD in any row fails closed the bank is instantly gonna get overvolted and overcurrented.
Click to expand...

What about the design briefly posted in The Hacksmith's channel? I noticed that it's missing several details, so I used information from datasheets to fill them in.

Reverse engineering of a circuit

Devil_Master said:
What about the design briefly posted in The Hacksmith's channel? I noticed that it's missing several details, so I used information from datasheets to fill them in.

I have already reversed engineered it myself a couple of months ago
He means 88v total, it's about 22v per row and actually closer to 24-30v(current dependent forward voltage of all 5 diodes in series [assuming 4.7v per diode vf since he is underdriving them] ) if we consider the typical vf of those diodes so totally doable by an lm338 powered by 44v, His team of discount 'EE' used a single tiny dpack MOSFET thinking it would be enough to pass around 384w...... That's why it failed during the operation. And also your schematic is wrong. There is no R2 and the output for each channel is taken from the adjust pin right before the 0.39Ω shunt. 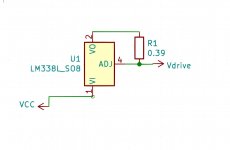 In this configuration. Also, the MOSFET is definitely not an IRF540N you can not tell apart components that have the same pinout just by the pinout. from the length of the numbers/words on its package, I can confidently tell that it's most likely from STM. Also that TI simple switcher series-based buck board for the water cooler is just a generic one from eBay with shit noise characteristics because they cannot design anything more complex than a linear CC Driver.

I recognize that configuration from the LM338 datasheet: page 20, figure 37. But then, why would there be a ground connection inside each of the channel drivers? 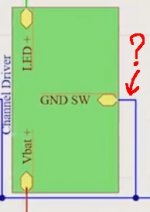 Devil_Master said:
I recognize that configuration from the LM338 datasheet: page 20, figure 37. But then, why would there be a ground connection inside each of the channel drivers?
View attachment 70608
Click to expand...

That is just bs, The 338 doesn't need the ground connection, it regulates on the positive.