Good news: I Just received my new Sanwu Spiker 445nm 5 watt laser. Bad news: I'm not absolutely sure which way the batteries go. I would imagine the standard (+) to tail cap.. But, I wouldn't wanna just guess. Anyone know?

Case NEGATIVE. I think almost all of Sanwu's lasers are case negative.

Ah THAT'S good to know! Just to double check.. That means to put the batteries into the laser (+) end first. Toward where the beam comes out?
Last edited: May 7, 2016

ChrisWhit said:
Ah THAT'S good to know! Just to double check.. That means to put the batteries into the laser (+) end first. Toward where the beam comes out?
Click to expand...

Yes. The - should go to the tailcap.

Oh yeah this baby is nice... Feels like I have some serious equipment in my hand. It s weight is another safety feature in that anyone who has no business messing with it, will probably put it right back down with due respect!

When I get comfortable switching between the modes I'll be posting some pictures. The "half click" thing works when you find that sweet spot. I've already managed to burn something across the room by accident! Didn't know it was one when I was staring at the little hole trying to figure out what it was for. The scary thing is I could smell combustion but never could find the source! �� no worries, i was fully goggled when I + knew+ it was on. Lol
Last edited: May 7, 2016
D

Chris, any updates? How you liking it. I'm thinking about a 3w Spiker myself.

It's really super nice. I'm still waiting on the beam expander. Planning to share some pics when it comes in. I may go ahead tonight and do a couple anyway. Everything works like it's supposed to. ~2 watts of 445nm on "half power" and 4.89 watts on "high" Sanwu sent me a video of it on their LPM. The focusing mechanism is actually a little easier and more direct, for a lack of better word, than my Jetlasers Ple Pro. But I do believe that it's also a simpler design, external as compared to J/L's internal focusing mechanism. Mine came with the G7 lens.

It actually puts out a decent spot compared to a 465nm laser. I have discovered that I have to be super careful with this level of power. I've already ruined my wife's sofa by complete accident. It didn't take but a mental lapse of less than two seconds for that catastrophe to occur! Lol. I'm guessing that with the incredible presence of its blue beam, with the beam expander attached and running on full power, it's gonna look like something out of Star Wars
According to my research and inquiring, this particular 445nm diode (NDB7875) is a good compromise between high power and decent beam specs. Sure you can go with the 7-8 watt diode but youd have such wild divergence. This laser although 'only' 5 watts, gives you better overall performance, IMNSIO
Last edited: May 16, 2016 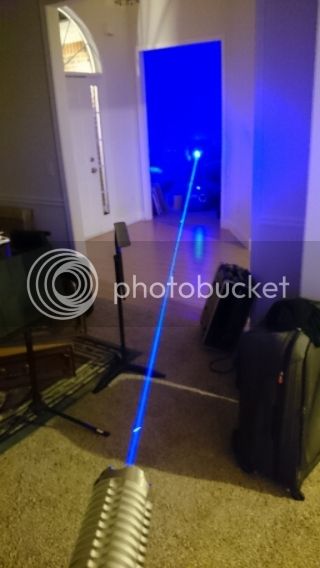 Notice how this thing illuminates that entire room across the way? My 465nm nor my 520nm really even do that!
The camera here though really pushes this to look like a lower wavelength. This is 445 and looks more dark blue in person. This camera seems to favor the 470nm vibe. My high powered 465nm Jetlaser Ple Pro with this same camera looks less aqua than even this.. go figure. But look at that nice tight little dot. Not bad considering what it is. This is focused to infinity.
Last edited: May 16, 2016
D

Thanks for the review. I was going to get the 3w but now thinking of the 5w. I can get the multi mode and use it at half power but would always have the option of going full. Not much more money.

I'll have to be careful. The thought of my wife reminding me about that burn hole every day for the rest of my life ...

Really though, visually there's practically no difference between the half power mode and full power. You just notice that it seems to burn a bit faster in full power.

And just for kicks, this is my Jetlasers 405nm @300-400mw. The interesting thing is that this camera picks up the beam, but I cant really see it. Say what you want about 300mw of dinky little 405nm, but this little bugger will burn a brown cardboard box from 25 feet away:

Okayyyy,,, so I just got my 3x beam expander in today from Sanwu. Here's how it looks on the Spiker:

Here's some indoor shots for reference, taken with an IPhone 6s Plus:

Some outside shots with the BE.. And this is much more impressive in person. High mode(5watts):

Nice pictures! Have you tried catching a cloud with your expanded beam?

Awesome stuff. I love what the expander allows my 520nm spiker to do.

Actually, every time I go outside with this thing it's like I'm so nervous about accidentally shooting a beam within sight of aircraft, that I lose my nerve. It's so bright, it has to be visible for miles away. When I get up to our mountain place far away from any airport, I'll get some good cloud shots as the locals start reporting aliens