Rescued my first laser pointer from 2010

Today I decided to dig around for the first laser I owned, a radioshack 532nm ~5mw pen from 2010. I found it surprisingly quickly in the bottom of a drawer with a bunch of other old stuff (I take way better care of my lasers 11 yrs later).

This is the laser: 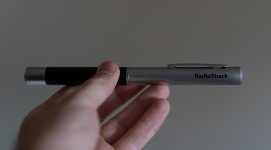 When I found it it wasn't in the best condition. There was battery corrosion inside, that nasty sticky stuff on the black rubber part of the host, and the button seemed stuck which made me fear the module shifted out of place.

The corrosion was mostly on the spring inside so I cleaned that off with pointed q-tips and a few drops of lemon juice I had lying around. For the rubber I got it mostly cleaned off with some windex and cotton pads.

After I let everything dry off, I was going to find some tools to try moving the module and make the button click, but I decided to see if it turns on first anyway.
So I put in 2x AAA and lo and behold 532nm light: 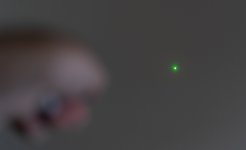 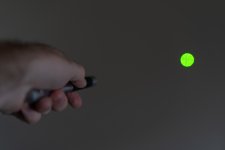 The button seems to work even though it doesn't click or move much when pressed, so I'm not going to fix what ain't broken

So yeah. Nothing you haven't seen before but I'm excited for nostalgic reasons and thought I'd share. I also found this thread about what I believe is the same laser from 2008: https://laserpointerforums.com/threads/radioshack-green-laser.30869/

(Also why does radioshack automatically link to their website?)